As Myanmar opens its doors to business and tourism, Mark Bibby Jackson tries the fairways of Yangon’s Pun Hlaing Golf Club to test the country’s potential for golf tourism. 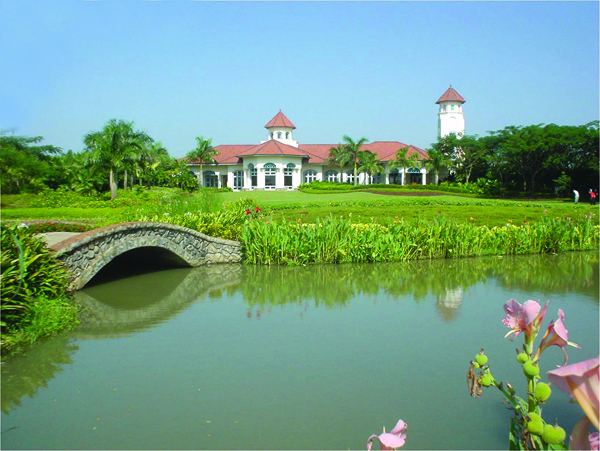 My ball soars, as if guided by angels, straight towards the inviting green ahead. A 520-yard par five, the eighteenth is the longest hole on the Pun Hlaing Golf Club. It also proves to be my nemesis.

The vast lake surrounding it claims my umpteenth ball of the day – I have already had to send back for reinforcements. I check with my caddy before placing my last remaining ball on dry land on the far side of the water hazard. The Royal and Ancient Rules that govern golf will have to wait for drier times. Eventually I putt out.

The day started in more auspicious circumstances. Early 20th century travellers described the 1901-built Strand Yangon as “the finest hostelry East of Suez”. Graced by the likes of Somerset Maugham, George Orwell, Sir Noel Coward and Rudyard Kipling, it was to be my home for two nights.

From the colonnaded exterior to the marble lobby and four poster beds, the Strand exudes a timeless elegance that has somehow survived the economic embargo of the country.

That is more than can be said for the limousine that takes me to the golf course some eight miles west of the city. At least it has a functioning seat belt and a semi-efficient air-con unit, unlike the car that took me from the airport the day before.

While the Pun Hlaing Golf Club is imbued with green tranquility, the route to the course is far from that. With motorbikes banned from the city, Yangon’s streets are littered with beaten up cars playing a game of dodgems on the streets, as pedestrians stand in line awaiting a break in the endless stream of traffic.

Since my last visit some 18 months previous, there has been an increase in the number of new cars — coinciding with the opening up of the country — but the banger is still de rigueur.

The journey to the course can take anything from 40 minutes to an hour and a half and, as we plough our way over a clunkety-clunk bridge on the outskirts of town, I can see why. The queue of traffic going the other way bodes ill for our journey back.

Designed by Gary Player, the Pun Hlaing Golf Club is set on a peninsular between two rivers, but it is the water located on the course that is the stand out feature. Water flanks the fairways and any errant drive is likely to suffer an early bath, as I find out to my cost. Having hosted the Myanmar Open in 2010, it is arguably the best course in the country.

The first drive I hit is straight and true, but unfortunately this proves the highlight of the day. The following hole, the first par five of the day, is the first time I find water — twice off the tee. According to my caddy’s generous scoring I escape with a triple-bogey, but she is not fooling me, this is going to be a long round.

Although not as picturesque as the Dalat Palace course in Vietnam — surely the most aesthetically pleasing course in the region — Pun Hlaing is not without its charms.

The par-four fourteenth is a stand out hole. Golfers must drive over a lake and onto the narrow fairway for an approach to the green. The surrounding fairways resemble an English garden, albeit with orchids substituting for petunias. Somehow I manage to clear the water and, despite triple putting, escape with a double bogey.

It is however, the eighteenth that is both the most striking and the most challenging hole on the course. The green is an island set within the ubiquitous water, linked to the fairway by a narrow causeway. It is here that I am destined to lose three balls before throwing in the towel.

My last encounter with water is undeniably the most pleasant. With a noon tee-off, a shower is essential, along with a change of clothes.

The traffic is still steady as we cross the bridge back to Yangon, but at least I know that the Strand awaits. Paying off the driver, I enter the hotel bar to enjoy an early evening’s gin tonic and imagine what the hotel’s previous famed guests would have thought of my golf.

Mark Twain may never have said the famous phrase attributed to him, “golf is a good walk spoilt,” and he certainly never stayed at the Strand, but it is this saying that I recall. For me, it was not so much the golf as the water that spoilt my walk. At least in the bar the only water to be found is tonic.