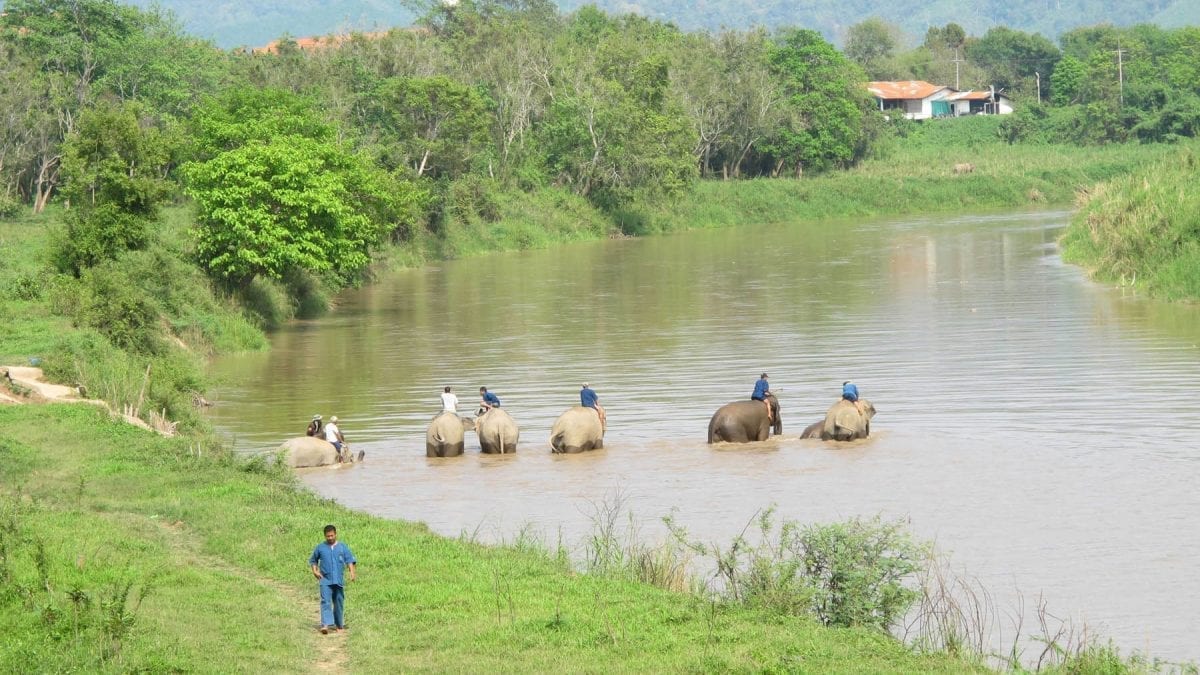 Set at the meeting point of Laos and Myanmar, Thailand’s “Golden Triangle” is set to become the country’s next tourism hotspot. Words by Mark Bibby Jackson.

My trip starts mundanely enough. A couple of elephants are grazing in the resort’s grounds while a flock of white birds drift past, in the distance lies Myanmar and Laos. This is the Golden Triangle previous opium stronghold and final frontier for Thailand’s tourism industry. It is also my home for the next two days.

At breakfast, like the rest of the guests at the Anantara Golden Triangle resort, I meet Meena. A seven-year-old elephant, she is the public face of the Golden Triangle Asian Foundation, an organisation protecting 27 domestic elephants living in the grounds of the luxury resort located at the meeting point of the three countries.

Some of the elephants have been rescued from “the streets” according to the resort’s general manager, Christian Zunk. A ban on logging has led to a decline in traditional work for the animals “forcing them to make a living by begging on the streets,” he explains. Hailing from London it’s hard to imagine the massive beast sitting on the streets a cap placed forlornly in front of them. But still I take his point.

Supported by UK group Elephant Family and Friends of Conservation in the US, the camp “works to rescue elephants in distress and provide a safe, sustainable income for them and their supporting families.” While mahouts tend the elephants, their wives weave silk in a mock village in the grounds of the resort.

In addition to providing a viable income for the elephants – part of the room charge is donated to the Foundation – the resort arranges rides as part of its standard inclusive package for guests.

My elephant is Lana, a twenty-something female. Bending on her hind knees she allows me to climb her back – there is no lofty podium here – and I struggle to swing my right leg over her colossal frame before grabbing hold of her ears. The mahout climbs on behind me and Lana rises to her full height.

Mahout riding is not something for those scared of heights nor for someone with a bad sense of balance – both of which I suffer from. Hanging on to Lana’s ears for dear life and digging my knees into her flank, we start to lunge forwards. Our mahout, Aek, shouts out instructions to Lana who dutifully obeys – thus demonstrating her superior grasp of Thai than mine – and we set out for a Sunday afternoon perambulation around the resort’s grounds.

After a while I become accustomed to Lana’s loping movement, and stop fearing a sudden descent to earth like a modern day Icarus at every step. The resort is right in the heart of the Golden Triangle. Across the Mekong lies Laos and a short elephant swim across the smaller Ruak river is Myanmar. We pass an elephant chained to a tree because she had ventured across the border to Myanmar the day before. Apparently she didn’t have the right visa.

Eventually it is time for the highlight of our short ride – a swim in the Ruak. Nothing in life has prepared me for bathing with an elephant. As we descend the steep slope, the only reassurance I can muster is that the waters will break my fall.

Safely entrenched, Lana falls to her knees and the muddy waters rise to my neck. She then rolls to one side and I fail to counterbalance in the opposite direction. Before long I am swimming with an elephant for the first time. It is at once refreshing and exhilarating.

Once we have safely finished our ride, Adrian Tortosa, a Spanish volunteer veterinarian, explains that the camp is not all about play. Important research on elephants’ intelligence is being carried out by the NGO Think Elephants International, which is developing conservation education curricula for Thai and international children.

One experiment involves placing a mirror in front of an elephant. While it sleeps an image, such as an arrow, is painted on the mirror. When it awakes, the elephant tries to remove the arrow from its head rather than from the image in the mirror. “If we can show to a lot of people they are very smart animals, they will treat them better,” says Tortosa.

The Golden Triangle’s remote location has not always worked to its advantage. The Hall of Opium, just across the road from the resort, illustrates that the area has long been associated with the papaver somniferum poppy and the opium produced from it.

Despite the propaganda video that greets visitors, the museum has an impressive series of displays and videos on the drug and its use both medicinally and recreationally from ancient times to the Vietnam War. The information on the role of the East India Company in the spread of opium, and the way that the Opium Wars opened China up to the West are particularly interesting. At the end of the exhibition a Hall of Reflection contains the thoughts of various Eastern philosophers encouraging visitors to contemplate upon the devastating effect the drug has had on man.

Zunk believes the remoteness that aided the production of opium in the region could help provide a future for tourism, especially for those who wish for something other than the Thai road most travelled by tourists, heading to Chiang Mai in the north and the islands of the south.

“It has a great potential,” says Zunk. “It is an undiscovered destination. You get back to nature with elephants and sleep with the sound of the jungle.”

Slow Tourism in Cambodia's Wild Side