For decades shut off from the West, Burma (or Myanmar) is now firmly on the tourist map. In Mandalay Marissa Carruthers discovers that the country’s historic hub is home to an abundance of unassuming charm and temples galore to attract the cultural visitor. 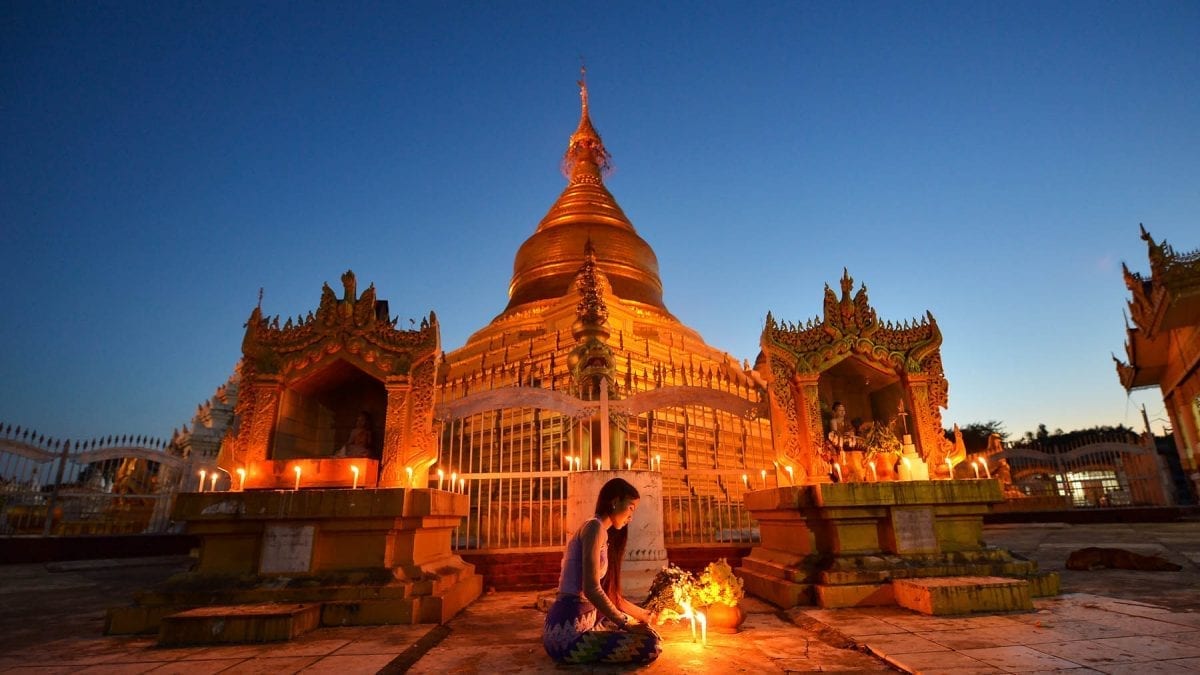 On the road to Mandalay there are no strangers just friends we have yet to meet. Certainly this is an epithet shared by my motodop driver for the day, Htoo Htoo, as we hurtle through pristine emerald countryside, and alongside shimmering rivers and sleepy villages.  “We love welcoming foreigners to our country,” he says before adding, “for a long time it wasn’t like that.”

I am travelling through Myanmar, on the road to Mandalay, It is my third day in Mandalay, Myanmar’s second largest city, and yet again, as clichéd as it may sound, I am astonished by the openness, friendliness and inquisitiveness of the people – and that is coming from someone who lives in Cambodia.

Two hours earlier, I had found Htoo Htoo sitting cross-legged on the thin wooden bench attached to the colourfully decorated walls of my guesthouse’s reception. His battered flipflops protruding from the bottom of his red and white checked lungi – a sarong that falls to the ankle – he stood to greet me. He smoothed the front of his crisp white shirt before letting out a wide grin, revealing a crooked set of maroon, betel-stained teeth – a sight I had become familiar with in my short time in the country.

My two travel companions had set off the previous evening for Bagan but time restraints left me put, and I was desperate to escape the lacklustre, unimpressive city centre. With one full day left, I wanted to leave the city and its neat yet chaotic grids of dull concrete blocks behind and explore the countryside I had looked at longingly as we cruised for 40 minutes from the airport along one of the country’s many impressive roads.

As the country’s last royal capital, Mandalay is a historic hub, and a day tour of the three ancient cities that sit outside it had been recommended. However, I was pretty templed out and shuddered at the thought of spending from dusk ‘til dawn rambling round more crumbling religious structures. So, I opted instead to visit, what I was told, is the most impressive – Inwa.

Cue Htoo Htoo, who rose to the ranks of motodop driver four years ago, having spent more than 20 years making a living on a cyclo. Despite being, at a guess, in his early 50s, he spoke impeccable English – something, he tells me, he has dedicated years to, picking up bits in books and learning from the young in his village before perfecting it on the steadily increasing flow of western tourists he caters to.

Sitting a million miles away from the lively streets of nearby Mandalay, it’s hard to imagine this peaceful rural area was once a bustling capital

Formerly known as Ava, the site, which sits about 20km south of Mandalay and has worn the crown of Burmese capital for more than 300 years during four separate periods since 1364, is accessible via a short boat ride. After arriving at the muddy bank where we board the small wooden boat at around noon, I decided to grab a bite to eat at one of the shacks skirting the landing bay. Despite being a tourist trap and charging almost $5 for a chicken curry – I had paid $1.20 in a respectable restaurant for a hearty meal and fruit juice the previous evening – my table was quickly filled with enough dishes to feed the 5,000, containing various pickled vegetables, a potent fish soup, hot chilli mixes, several curry dishes and a ridiculously large bowl of rice.

Stuffed we jumped on board, along with the bike, and took the short boat journey across the river to Inwa. Sitting a million miles away from the lively streets of nearby Mandalay, it’s hard to imagine this peaceful rural area was once a bustling capital. Now home to farmers, villagers and craftsmen, the only sign is the plethora of ruins scattered among the rich green fields or hidden in woods, where golden spires stretching to the sky give away their existence.

Most visitors take a tour by horse and cart, adding to the quaint and calming charm of Inwa. Despite the appeal, I decided to stick with Htoo Htoo, who had so far proved to be quite the tour guide, stopping at various historic spots on our way to the ancient city to explain their background.

My choice proved inspired as he wove his bike down dirt tracks that snaked through woods and fields to show me the highlights of the 5km trail. He led me petrified through the spooky bat-inhabited undercrofts of the imposing brick Maha Aungmye Bonzan temple, up the aged stairs to the roof of one of many dilapidated royal buildings to reveal unbroken views of the countryside dotted with collections of stupas, monasteries and ancient ruins.

After three hours, both exhausted, we headed back on the road to Mandalay, finishing my trip on a high. While the city had failed to impress at first, its mundane streets had started to grow on me. It was refreshing to see no signs of the West; no high street housing flashy franchises; no shimmering new tower blocks or classy cocktail bars.

Road to Mandalay – in words and song

On the Road to Mandalay comes from the poem by Rudyard Kipling called Mandalay that was published in 1892 in Barrack-Room Ballads, and Other Verses, although it was was written in 1890, when Kipling was 24. Clearly influenced by the beauty of the local women, Kipling adopts the persona of a young soldier who is longing for Asian exoticism from the cold of England.

Ironically, though the poem keeps on referring to the “road” to Mandalay, the normal route to the city from the then capital Rangoon, now Yangon, was by paddle steamer along the Irrawaddy River. Now fortunately Mandalay is easily accessible by road, although you can still travel there by boat if you choose.

The text was adapted for the song On the Road to Mandalay which was released by Frank Sinatra on the album, Come Fly with Me.

Like many parts of Myanmar, for now, Mandalay remains relatively untainted by tourism, or the outside world. Tradition still prevails, with many men and women, both young and old, sporting lungis. Life still has a laid-back, almost lackadaisical, feel to it. Food other than Burmese is scarce, but who cares when it’s so diverse, taking in cuisine influenced by its Chinese, Indian and Thai neighbours.

The sight of tourists still provokes a response. As we stood on the terrace of the sprawling Sutaungpyei pagoda at the 790ft summit of Mandalay Hill on the outskirts of the city, waiting for the sun to slip behind the panorama of rising hills on the horizon, crowds of monks practiced their English on us, relaying dreams of studying at Oxford University. And as we meandered through the many markets and carefully teetered half-way across the creaking teak wood U Bein Bridge, that miraculously stretches 1.2km across Taung Tha Man Lake, we were once again accosted by friendly, inquisitive locals wanting us to pose for pictures.

Charm this city has in bucket loads, if you scratch beneath the surface. The question is – how long will it last?