An eco-tourism scheme launched by Cambodia NGO Wildlife Alliance provides adventurous travellers with the chance to watch rehabilitated animals being released back into the Cardamom Mountains. Words by Marissa Carruthers. 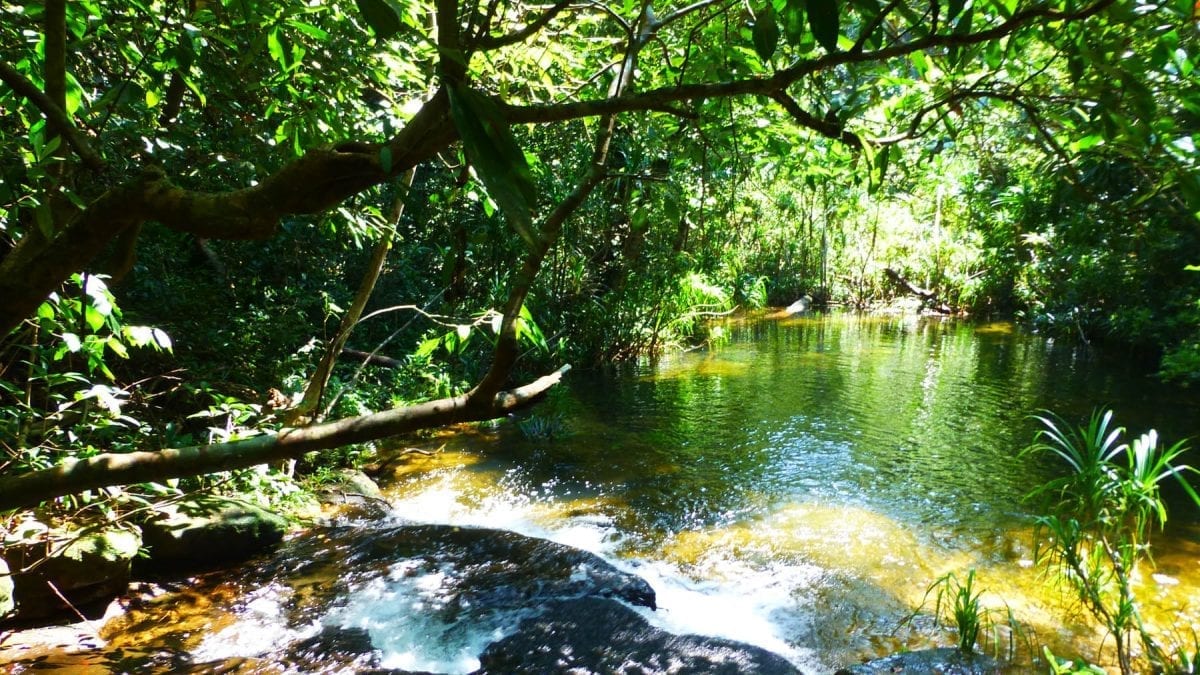 The sturdy truck we have spent the last four-and-a-half hours in jerks to a halt on a muddy patch of grass at the edge of dense jungle. The torrential rain that has hampered our vision for the last hour hammers hard on the steamed up windows.

We struggle to squirm into the flimsy ponchos we bought during a brief stop-off at the closest village of Chi Phat, seven kilometres away, while our guides Roth Buntheon and Nick Marx embark on a struggle of their own in the open air trailer. Secured to the boot in spacious cages sit three slow lorises, nervously clinging to the mesh wire that contains them.

They are being transported to our final destination – a remote location in the heart of the Cardamom Mountains – as the last leg in their long road to recovery and re-integration back into the wild. The animals are a handful of many that conservation NGO Wildlife Alliance (WA) has helped, rescuing often endangered species from the clutches of poachers and illegal trade, and nurturing them back to health before returning them to their natural habitat.

We have been warned that the rain hasn’t stopped for days in the country’s wettest spot, Koh Kong province. Flooding is rife, and there’s a high probability that the road – vehicle tracks faintly carved in rough terrain – that makes up the last part of the journey will be blocked.

“There’s the road,” says Roth, who is in charge of wildlife care at WA, with a chuckle as he points to a large swamp of water that skirts the jungle. Sure enough, the prediction proves correct and he explains we will ditch the truck and reach camp – WA’s release station and recently launched eco-tourism spot – by motorbike instead.

An exhilarating ride ensues as we skid along slippery mud tracks, managing to make it through knee-deep waters and hurtle through emerald green paddies that sit in rich contrast to the menacing grey sky. A hair-raising 30 minutes later and we have reached our final destination, a clearing of open grassland that houses three wooden lodges and a sheltered kitchen, dining and social area.

The thatched chalets were constructed by locals last year, with materials transported along the same rough route we had taken, only via ox-cart. In the absence of electricity, solar power rules, and rooms come complete with a shower, Western toilet, desk and two double beds with built-in mosquito nets.

A short stroll away sits the stars of the show, a collection of animals that are being slowly reintroduced to the wild after being nursed back to health at Phnom Tamao Wildlife Rescue Centre near Phnom Penh. Marx, WA’s care for rescued wildlife director, says, “Many of the animals we rescue cannot be released back into the wild, but those that can are brought to our release centre. We call this a soft release as they stay in safe enclosures to acclimatise to their new habitat.”

After pulling on the wellies that waited for us outside the room, it’s time to meet our neighbours. We wade through flooded marshland, plucking the leeches that race up our legs from our trousers, to reach a bamboo hide that sits outside a one-hectare reserve. We’re told to remain silent if we want to see the two timid sunbears that lurk inside.

As one of the keepers enters the enclosure to deliver a dinner of fruit, coconut, rice soup and dog food, we spot movement in the bushes. A few seconds later, two muscular black bears, who were rescued from snares, amble out of the green. We watch in awe as they shove their long yellow snouts into the food and wolf down what’s on offer. Minutes later, we spot them clambering up a tree trunk to nestle in treetops 20 metres above ground for an afternoon snooze.

The rest of the afternoon is spent visiting the other animals on site, helping feed the giant squawking wreathed hornbill, the scaly pangolin mother and her two babies a tray of stinking ants, then watching the nimble common palm civets dart in and out of tunnels in their pen, and playing with mischievous longtail macaques. As the sun starts to set, we head back to camp, stopping off to watch the nocturnal leopard cat spark into life in its temporary cage; its slick spotted body stretching into an asana pose as it stirs from its daytime slumber.

As our surroundings slump into pitch black, we round off the day with a hearty home-cooked Cambodian dinner of pork, rice, chicken and soup before sharing a couple of cans of Angkor beer with keepers, Sooeun, Oun and Chen. As dedicated animal advocates, they share stories of setting up the camp, working with the animals, and their mission to educate locals on the threats posed by poaching and logging.

Settling down for the night, we fall asleep to the chorus of cicadas, the croak of frogs and the buzz of insects outside. The experience has been exhilarating and the setting enchanting; an adventure we won’t be forgetting for a while.

“You can enjoy the forest, fresh air, relaxed atmosphere, wildlife and the amazing staff,” Marx says the next morning as we settle down for breakfast in the company of two tame miner birds. “You’re not going to see lions like in the plains of Africa. You might get wet, you will get bitten by leeches, but you will be relaxed, and you will have an amazing and enjoyable time.”