Mark Bibby Jackson travels to Avoriaz to experience the Snowboxx music festival, and learns the value of walking before he can ski. 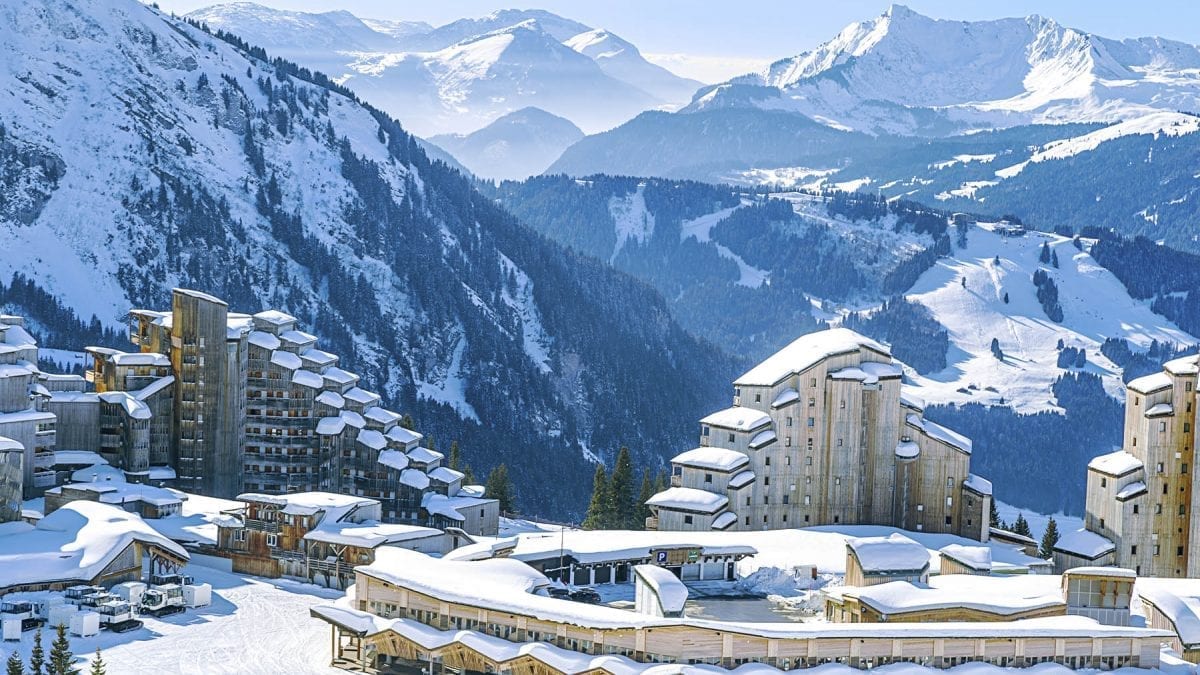 Mark Bibby Jackson travels to Avoriaz to experience the Snowboxx music festival, and learns the value of walking before he can ski.

I am not really a skier. My previous efforts are limited to one drunken descent of Brentwood’s artificial slope egged on by my always supportive cousin where I ended up wrapped up in a tree, and a slightly more successful trip to Niseko on Japan’s Hokkaido island where I narrowly managed to avoid a James Bond inspired arrival at the Hilton on my skis.

As a child, my parents never had the money to fund a winter trip to the snow. What holidays we did take were reserved to the beaches of Spain – once – or the hills of North Wales – too many times to mention. So, when I was invited to the French Alps on a skiing trip I felt somewhat of a fraud.

However, I haven’t come to Avoriaz solely for the skiing. For the alpine resort, celebrating its fiftieth anniversary in 2017, is also hosting the Snowboxx music festival where bands people younger than myself will drool over are playing. I learn too late that my arrival is timed a week before Sting’s.

Think more Transformers than The Sound of Music

“It’s the perfect mix, assures Aden Levin, marketing manager of Main Stage Travel that organises Snowboxx. “Snowboxx is the ultimate winter festival combining the best ski resort (Avoriaz) and the some of the best music in the world.” Levin has drawn the long straw of showing a bunch of journalists around the concert before heading off to the Antipodes. It’s a tough life for some.

My pathetic efforts to force my feet inside my oversized snow boots, and then traverse the icy snow with the nimbleness of the Honey Monster on skis, do little to persuade myself that I belong here.

Not that I have such concerns the previous evening. Sitting in an igloo bar – made of ice – surrounded by ice statues of rhinoceroses drinking cocktails (us, not the rhinos) with ice, I feel most at home. Outside, the snow falls as Wilkinson – the DJ my youthful nephew had recommended – plays a set on an intimate stage even more temporary than the igloo. As the temperature plunges below zero, the DJ’s fingers must be getting cold but still he spins on. He gets an A+ for effort at least. One of my colleagues – a keen snowboarder – wears a broad smile across his face in anticipation of the virgin snow the following morning.

It is quite mesmerically beautiful.

Over its fifty years it’s fair to say that Avoriaz has not met with universal approval. The skyscraper modern design – imagine a crazy game of Jenga for giants – is far removed from the traditional image of an Alpine resort I have in my mind. Think more Transformers than The Sound of Music. However, on our first evening it adopts a surreal glow as the cliffs emerge from the clouds and, the music now abated, we descend down a small snow chute to the downtown area. I expect to bump into a Bond villain any moment.

The resort has the feel of a small town – but one designed for fun. Various restaurants, bars and clubs vie for our attention. Eventually we settle upon La Cabane where we opt for a cheese fondue ­– after all Switzerland is a short ski across the border – and see who can stretch the cheese the furthest. Clearly, the cocktails have had the desired effect, unless it is the altitude that is playing childish tricks on us.

After the competition is declared a draw, we wade our way through the snowdrifts, only to settle into a bar where shots are lined up and the morning after forgotten in the high of the night before.

The aforementioned morning draws back her curtain to reveal the most beautiful green valley surrounded by mountains of snow and capped with a brilliant blue sky only ever so slightly tinged by the clouds that are fuzzing in my hungover head. While the preceding night Avoriaz possessed an eerie quality, today it simply dazzles. Our two-bedroom apartment at Pierre & Vacances’ L’Amara Apartments affords us the most perfect view down the valley towards the resort of Morzine below.

Before long I decide that skiing is not for me, at least for today. I’m just as happy – well far happier – to settle here and watch all the skiers plough their own furrow through the snow. A brief dalliance with the slopes, out of breath perhaps from the altitude, persuades me to return to my vantage point.

This is the beauty of Avoriaz, there really is plenty for all. I spend the rest of the morning relaxing in the swimming pool and sweating off last night’s excess in the steam room and sauna while some of my companions ski off into Switzerland for a traditionally expensive cup of coffee.

We meet again for Rock the Pistes at Portes du Soleil, where Rag ‘n’Bone Man is playing high in the mountains. Hundreds of skiers sit on the snow within a make-shift crucible arena as the inviting smell of a barbecue wafts its way towards us. As the 2017 Brit Awards winner takes to the stage, all below us begin to dance, any ski-affected aching legs temporarily forgotten in the moment, while we help ourselves to some complimentary sangria in our official press area’s lofty perch. Even I am too young too recall Woodstock, but surely this is how it must have felt like, just substitute snow and ice for grass and more grass.

We had opted to take the ski lift up without our skis. So, as our fellow revellers start to weave their way back to the resort, we head for the return lift, where an officious official indicates we have to move just around the corner. Assuming that is where the embarkation point is we duly oblige, only to discover there is no such point. Apparently the lift is only for those on the way up, not for those in descent. With no option other than to walk, we make our sangria-fuelled way back down the mountain.

However difficult you might find skiing to master, I can assure you that stepping your way through deep snow, interspersed with impromptu slides while dodging the occasional acrobatic snowboarders is no real alternative. Perhaps we should have avoided the red route, which both indicated the steepest slope and the most cavalier snowboarders, but even so the route down is precarious. Somehow I manage to avoid becoming the first visitor to these slopes to pick up a typical skiing injury without actually skiing or boarding.

After our close shave on the piste we retire to Apres – a large open-air area where people chew the fat and drink – in order to drink some much needed and strictly medicinal beer.

I’ve always thought you have to be a little crazy to take up skiing in the first place, but as the assembled cast of fancy dressed skiers and snowboarders stand at the top of the hill, an icy pool awaiting them, I am convinced.

The organisers of Snowboxx claim that more than 4,500 people attended the festival over the week, making it one of the biggest snow and music festivals in the world. That night we settle for a raclette before listening to a DJ play – Wilkinson again – at the main stage. While others head off for one of the many clubs, I tread my unsteady path back to my apartment.

The final day starts with a bottomless brunch at Le Grand Café just across the road from L’Amara Apartments. I pass a skier clutching two bottles of prosecco under his coat on the way out. I doubt he’ll pass any drink-sliding breath test. Even more than the snow and the blue skies, this is the perfect way to kick off the day. Several glasses of prosecco and scrambled egg later, I am prepared for anything – well anything that doesn’t involve skiing.

That afternoon we gather once more at Apres. Unfortunately, we have missed the human bowling, where giant zorb balls – participants strapped inside – are projected towards even more giant inflatable skittles, a strike assured each time. But at least we have arrived in time for the skim pool.

I’ve always thought you have to be a little crazy to take up skiing in the first place, but as the assembled cast of fancy dressed skiers and snowboarders stand at the top of the hill, an icy pool awaiting them, I am convinced.

There is a lengthy delay while the bottom of the pool is patched up – apparently it has sprung a leak – and is then refilled with water.

Our first contestant descends the slope to a hushed silence, and then propels himself onto the surface of the water before bouncing safely to the other side. He lands successfully, as do the rest of the initial salvo of boarders and skiers. Barnes Wallace would have been proud.

Eventually the madness takes over. One takes on the challenge backwards, another on one ski, the fancy dress becomes both more imaginative and revealing. Finally, one intrepid skier bounces the pool landing a backwards somersault on the other side. The assembled melee erupts, we have found our champion.

Later that evening as I emerge from an impromptu set given by my roommate DJ Ludovic H in some bar or other in the early hours of the morning I bump into our back-flipping hero once more. Now he’s supported by several friends, unable to walk in a straight line let alone somersault across water. Apparently, the reward for his feat was a generous quantity of beer tokens.

I smile at him in recognition of his great achievement, secure in the knowledge that I at least can manage to walk back to my apartment unaided, after all I have left my skis where they belong – safely stored away in their locker.

For more information about Snowboxx 2018, visit their website. Prices and packages start from £239. Tickets are on sale from August 2017. You might also think about downloading a skiing app.