After taking on the Ghorepani Poon Hill trek, Mark Bibby Jackson returns to Kathmandu to travel to the ancient capital of Nuwakot, itself devastated by the Nepal Earthquake in 2015, to catch up with a very brave person. 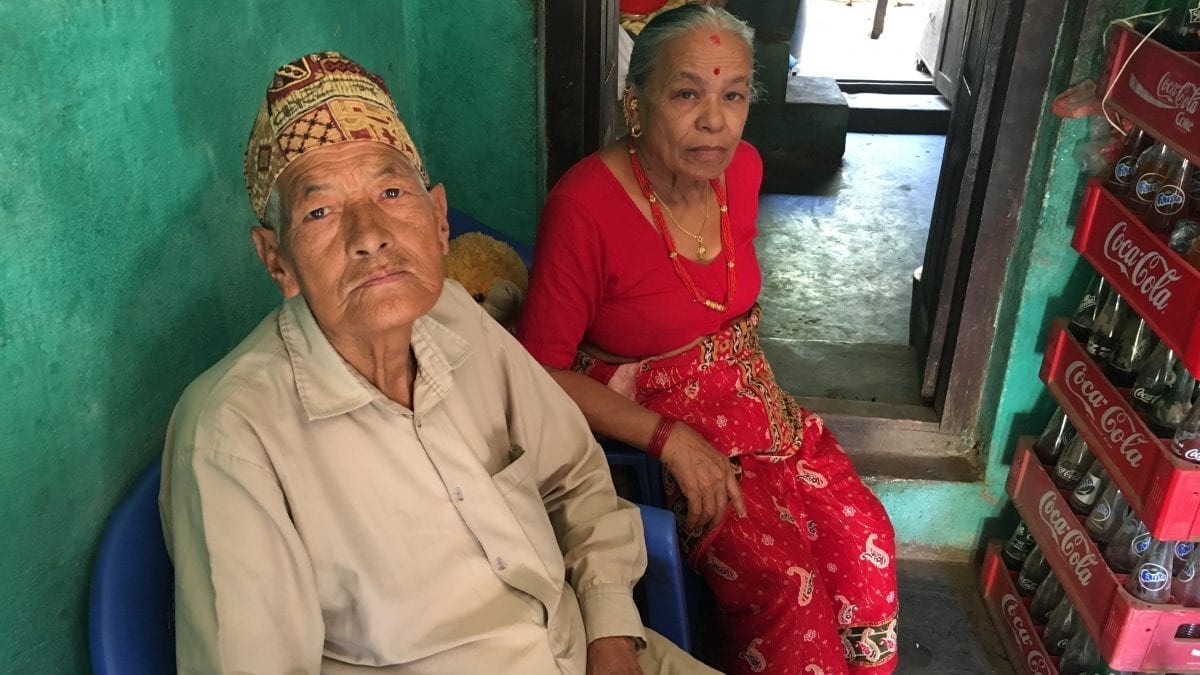 After trekking in Nepal, Mark Bibby Jackson returns to Kathmandu to travel to the ancient capital of Nuwakot, itself devastated by the Nepal Earthquake 2015, to catch up with a very brave person.

In November 2015, I visited Nepal with my photographer friend Nathan Horton. We encountered a country still reeling from the aftermath of the earthquake that shattered the country in April. Then tourism was non-existent and transport was at a standstill with lengthy queues of neglected motorbikes and cars lining the way to closed petrol stations; the consequence of a heartless embargo on fuel coming in from neighbouring India. My flight out had to stop in northern India as there was insufficient fuel at Kathmandu airport to fly all the way to Delhi.

I carried my 93-year-old mother out and hid behind the house. I felt like everything was falling apart, dust was everywhere in the air, houses were falling down and the earth was moving

The villagers I encountered had survived the monsoons and were awaiting the harsh winter with dignified nobility yet anger. Although they had benefited from emergency relief, governmental indecision was denying them the bank loans that were essential to reconstruct their homes and start rebuilding their lives.

We visited the village of Nuwakot, which was some 30 kilometres from the epicentre of the Nepal Earthquake 2015. Once a proud capital of Nepal it now lay in ruins. I interviewed several of the villagers, but one stood out, and it was she that I had returned to meet.

Despite its diminutive stature, the ancient capital of Nuwakot is steeped in historical significance to the Nepali people. It was from here that King Prithivi Narayan Shah and his army rode to conquer the Kathmandu Valley in 1768 to unify the nation.

The long winding road that climbs from the market town of Trusili, eventually leads to the ancient Nuwakot Durbar Square. The most significant building on the square is Taleju Temple built by King Mahendra Malla in 1564. Unfortunately, much of the square has been devastated by the Nepal Earthquake 2015 that destroyed an estimated 30,000 buildings in the area as well as taking 1,000 lives. Restoration work has been painstakingly slow.

If you walk right out of the square you meet the magnificent Saat Tale Durbar (Seven Storeyed Palace). King Prithivi Narayan Shah built this as a family home in 1762. It is also where he died in 1775. Badly damaged by the Nepal Earthquake 2015 it is not open to the public.

After Saat Tale Durbar, the road leads through a narrow street that was totally unspoilt until the earthquake struck, but is now a row of ruins in varying degrees of repair. At the end lies Bhairav Temple, one of the oldest temples in Nepal. Again this building suffered greatly from the earthquake, although the stunning views down from it to the valley below remain undisturbed.

When the earthquake struck in 2015, Shobha Dangol pulled her ninety-year-old mother Putali out of the wreckage that used to be their home. Upon my previous visit, the house they shared was a mound of rubble, and Shobha, with her 12 family members, was living in a corrugated shed and separate tent. This time, I found her still living in the same shed, but at least there was a pile of new bricks next to it with which to build a home.

“I was sleeping on the first floor and I had a matter of seconds to save myself,” says Shobha Dangol. “Luckily I escaped. I carried my 93-year-old mother out and hid behind the house. I felt like everything was falling apart, dust was everywhere in the air, houses were falling down and the earth was moving.”

“Before we built this accommodation, the entire village was living in one tent,” she explains. “When a strong wind came, we were all holding the tent and trying to stop it from flying away.”

Recalling my earlier visit, Shobha invited me in for some local wine (raksi) and dal bhat. Despite losing almost everything in the earthquake, she still shared what little she had remaining with me. Though I felt uncomfortable in accepting her hospitality, I realised that my refusal would cause a far greater offence. In Nepal, there is a saying that there are no strangers, just friends you have yet to meet.

But Shobha is not the only person waiting to rebuild her life.

Sundar Man, 78, and Jhamka Maya, 76, (pictured at the beginning of the article) lost the top floor of their building to the Nepal Earthquake 2015. They are planning to build a new house once the monsoons have relented in September. They complain that they have not seen any further money since the initial compensation they received from the government, like Shobha. They estimate that it will cost 4 million rupees (almost $40,000) to build their house, money they will have to borrow from the bank.

“We are not happy with the government response,” they say; a sentiment that echoes around the small square. The money borrowed will be mortgaged against the value of their land, and the pair admit that they are concerned about how they will meet their repayments. Ultimately, it’s their children that most likely will become saddled with the debt.

Prior to the Earthquake, Nuwakot, was developing a burgeoning reputation as a community-based eco-tourist destination, with the Lonely Planet describing it as “a miniature Shangri-la, floating somewhere between the 17th and 21st centuries“. Despite the trademark hyperbole, it is a view that Nathan Horton echoes, even including the destination on his tour of Nepal’s lower valleys. Ambitious plans were drawn up to develop the historic site as a heritage village. Now the number of tourists has trickled down to some 20 or 30 per day, according to the villagers, and the bus only arrives twice a week.

However, tourism is slowly starting to recover in Nuwakot as in the rest of  Nepal, with Nathan Horton now including the ancient capital once more on his tours after a brief hiatus. Still, Horton recognises the dilemma that the community is facing in counterbalancing the need for new housing and the preservation of the past.

“The interesting thing about Nuwakot is the conundrum between the desperate need for immediate and adequate housing without compromising the long-term necessity of preserving, at least a heritage feel, to a town centre that increasingly relied on tourism as one of Nepal’s most important historical sites,” he says.

Certainly Shobha Dangol plans to rebuild her house with modern earthquake-resistant materials, such as the building you can see in the background of the photograph of her above, although she does intend to clad the facade with old materials to create the sense of heritage. However, it’s doubtful whether such a compromised approach will fool too many travellers.

Horton is relieved to discover that most of the friends he has developed over the years of running photography tours here have survived the Nepal Earthquake, although he is frustrated by the lack of progress in terms of reconstruction, some two-and-a-half years on.

“I always encourage some form of engagement with people we hope to photograph, if I am true to my words then I inevitably start building friendships with people on my regular tour circuits. As with any friendship you also feel great fear when you hear of such a dreadful disaster befalls them. In this case it was great relief that nearly all the people I had got to know were still alive, but a massive frustration to keep returning to the same village on a six-month basis year after year and see little or no progress in their housing conditions,” he says.

Want to discover more about the country, read our Essential Travel Guide to Nepal Holidays for the Over 40s.

One place that has remained open is the Famous Farm, despite suffering extensive damage. Two cottages and a manor house form a courtyard set in the hills above the ancient capital. The views are bewitching. I can hardly imagine there is a more beautiful place to stay in the surrounding area.

Before we take the long journey back to the capital, I have one last opportunity to savour my beloved dal bhat. As I wait for it to arrive I have plenty of time to reflect upon my journey. This might be a country still suffering from the aftermath of the Nepal Earthquake 2015, yet the magnificence of its landscape and the indomitable spirit and unceasing hospitality of its people remain. The best that we as travellers can do to help these people is to visit and re-visit Nepal.

As my food arrives – a feast fit for the ancient Gorkha King Prithivi Narayan Shah – this seems no act of charity but one of the most shameless self-indulgence.

Mongolia Travel: Staying in a Ger