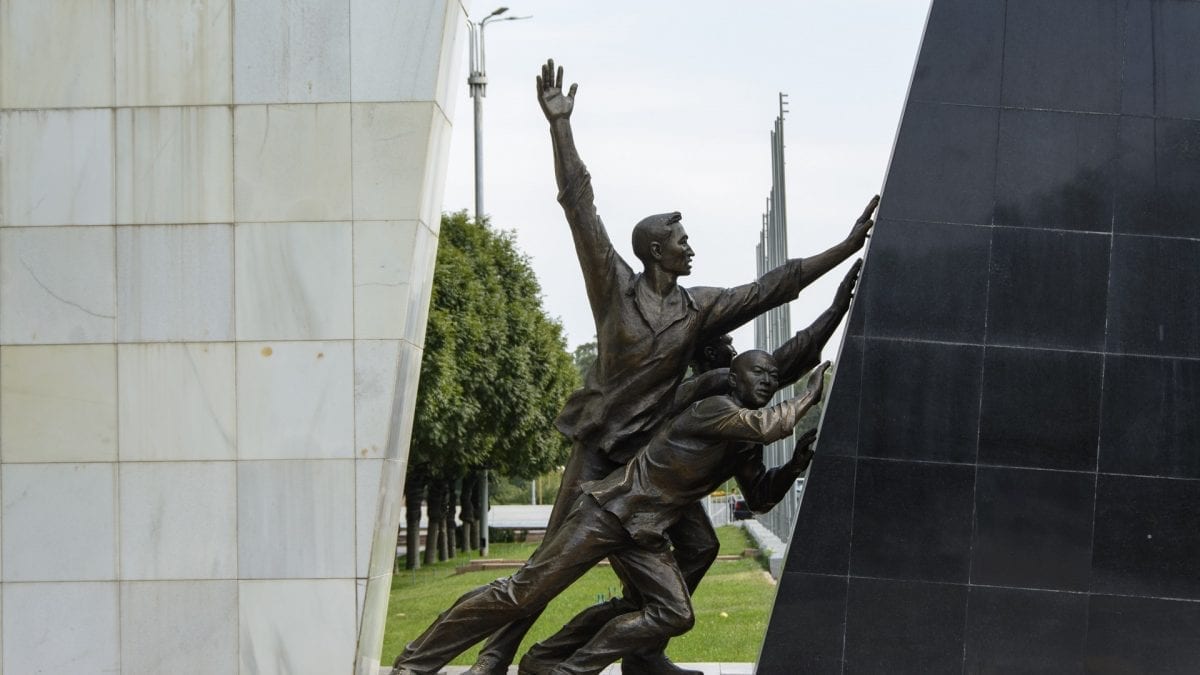 Before I set off to visit Kyrgyzstan’s quirky capital Bishkek, a former resident had tipped me off about Save the Ales, the city’s only microbrewery founded and run by Kyrgyz women. First opened in May last year, this unpretentious little bar with no TV and room for only a dozen people, hidden in an alley overshadowed by a looming Soviet apartment block, remains Bishkek’s beer lovers’ secret. So, after checking in at the friendly Southside Guest House in – you guessed it – the southern part of Bishkek, this was naturally where I headed on my first night in town.

As I saved and savoured the ales – the first one a fruity brew called Maerzel – I met a typical sample of Bishkek’s diverse population. Roman was an ethnic Ukrainian who popped in to have his one-litre flask filled with take-away draft beer, Viktor and Kyril were ethnic Russians and English-speaking Ermek an ethnic Kyrgyz. Later on a cheery trio of Tajik artists dropped by to quench their thirst. They had come to Bishkek to participate in the International Festival of Street Theatre.

For USSR aficionados, Bishkek is Disneyland

As a capital, Bishkek is still young – less than a hundred years. At first impression it feels as if the city has been plucked out of 1980s Russia, then dropped a few thousand kilometres away into Central Asia. Soviet icons are still everywhere – whether it’s a real MIG fighter jet mounted in front of the National Guard headquarters, statues of Lenin, Marx and Engels, or the hammer and sickle symbol on the columns of the pink-coloured State Opera and Ballet Theatre. For USSR aficionados, Bishkek is Disneyland.

Even Panfilov Park, named after the Soviet general who died fighting the Nazis, has its walkways laid out in the shape of the five-pointed Communist star. Apart from a statue of the Russian hero, today the centrally-located park boasts a Ferris wheel, dodgy fun fair rides, food stalls and karaoke machines. The pleasant, laid back ambience is personified by old Kyrgyz men watching the world go by wearing their distinctive kalpak – the tall, white, felt hat that is probably Kyrgyzstan’s most iconic piece of clothing.

Unlike some of its fellow Central Asian capitals, Bishkek has chosen to compromise not by destroying its Soviet icons but through demoting them instead

Yet, the more I explored these remnants of bygone times, the more I found a city at a crossroads. The 10-metre-high bronze Lenin statue has been moved from its original place in the city’s prominent Ala-Too Square to a more discreet spot behind the State Historical Museum, while Marx and Engels are now quietly conversing on their plinth in safe anonymity – their busts still stand but their names have been removed. Unlike some of its fellow Central Asian capitals, Bishkek has chosen to compromise not by destroying its Soviet icons but through demoting them instead.

Meanwhile, the faces of candidates for the upcoming presidential election – “the freest and fairest election in Central Asian history” according to a senior western diplomat in a The Guardian article – smiled down at me from billboards throughout the city. With its fair share of mudslinging and maligning of candidates, the campaigns certainly included what has become a main staple of many democratic elections the world over.

Like Almaty, its bigger brother across the border in Kazakhstan, the urban planning of Bishkek is one of broad streets and wide boulevards laid out in a grid or, if you’re Belgian, a waffle. It feels less provincial than Dushanbe, its counterpart across the border in Tajikistan. But while it provides the anonymity of a real city, it’s still human-sized and eminently enjoyable to walk in: despite media reports about more trees being felled to make space for fast-growing car traffic, Bishkek holds the enviable title of Central Asia’s greenest capital.

Yet, don’t let the broad footpaths and abundance of trees pressurise you into walking the entire city. When my legs began to protest, I hopped onto one of the ubiquitous marshrutki or public mini-buses. Thanks to the impressive and free Android app Bus.kg, this proved an efficient, cheap and fun way to travel around and get up close and personal with the locals, without the help of craft beer.

Strolling through town, it’s easy enough to forget that Kyrgyzstan went through two revolutions in the past 12 years

By midday I found myself indulging in fast-food noodles behind a window in a Korean bistro on the main thoroughfare called Chui Prospekt. Bishkek offers an impressive variety of local and international cuisine reflecting its diversity. The city’s ethnic composition has dramatically shifted since Kyrgyzstan’s independence in 1991. Where it used to be predominantly Russian, the population – less than one million – is now majority ethnic Kyrgyz with sizeable communities of Russians and Uzbeks. Other minorities include Dungan Chinese, Uyghurs, Tatars, Ukrainians and a seasoning of more than 70 smaller ethnicities. The delectable Georgian fare I experienced at the more upmarket Pur:Pur restaurant later in the evening just served to reinforce the view that there’s no shortage of choice when it comes to dining.

Strolling through town, it’s easy enough to forget that Kyrgyzstan has gone through two revolutions in the past 12 years. I spent the afternoon browsing local handicrafts and listening to a busker at an annual fair, stopping at hip coffee shops and picking up felt-made souvenirs at the Soviet-era TsUM – or Central Universal Department Store –, the formerly state-run malls that can still be found all over the former Soviet states.

In the evening, Ala-Too Square, in the heart of Bishkek – where shootings took place during the 2010 ‘regime change’ – was filled with families and selfie-chasers while overhead thousands of red and yellow lights in the shape of the national flag coated the place with a festive atmosphere. And at night, an electronic music party on Pushkin Street concluded the street theatre festival that for four days had been energising the capital with a wide array of performances.

In guidebooks and on travel blogs Bishkek is often described as a pass-through city or a convenient stop to sort out visas to other destinations. Such lukewarm praise had persuaded me to stay in the Kyrgyz capital only for one full day on my way to a horse riding excursion in Naryn Province. But while it may not be justified crossing continents to visit the city for its own sake, I found it a vibrant and unusual place that warrants more than just a day or two on any traveller’s itinerary. Not because there are so many sights to see – there aren’t – but to allow yourself to soak in an atmosphere still redolent with the country’s recent past while quietly hopeful for a better future. Perhaps nothing embodied this better than the clientele of Save the Ales.

The night of my arrival, two mean stouts and a tasty Indian pale-ale later, as Rima, the young female bartender, closed shop, without hesitation, Ermek, Viktor and Kyril invited me to continue our festivities at the latter’s Soviet-style apartment. His was an uncompromising bachelor’s den sporting the stereotypical dirty dishes, a scattering of unwashed clothes, unmade bed and an unconcerned ginger cat. A little inebriated, I contemplated how remarkable it was that the Jewish Viktor and self-proclaimed atheists Ermek and Kyril, who all hail from different ethnicities and whose fortunes have dramatically shifted over the course of one generation, found themselves enjoying craft beer in a women-only owned bar in a predominantly Muslim society. Already then, before I had even commenced my tour of Bishkek, I knew I would visit it again.

If you are looking to book one of the numerous hotels in Bishkek, enter your dates in our flight and hotel comparison engine to search hundreds of sites for the best deals:


Turkish Airlines and Aeroflot fly to Bishkek from various destinations in Europe including London, with a stop in Istanbul and Moscow respectively.

Air Astana flies from London and other European cities to Almaty with a stop in Astana. From Almaty it’s possible to take a taxi or minibus (3-4 hours) to Bishkek, or fly. Air Astana also flies directly to Almaty from Bangkok.

Use our above flight search engine to find the best deals.