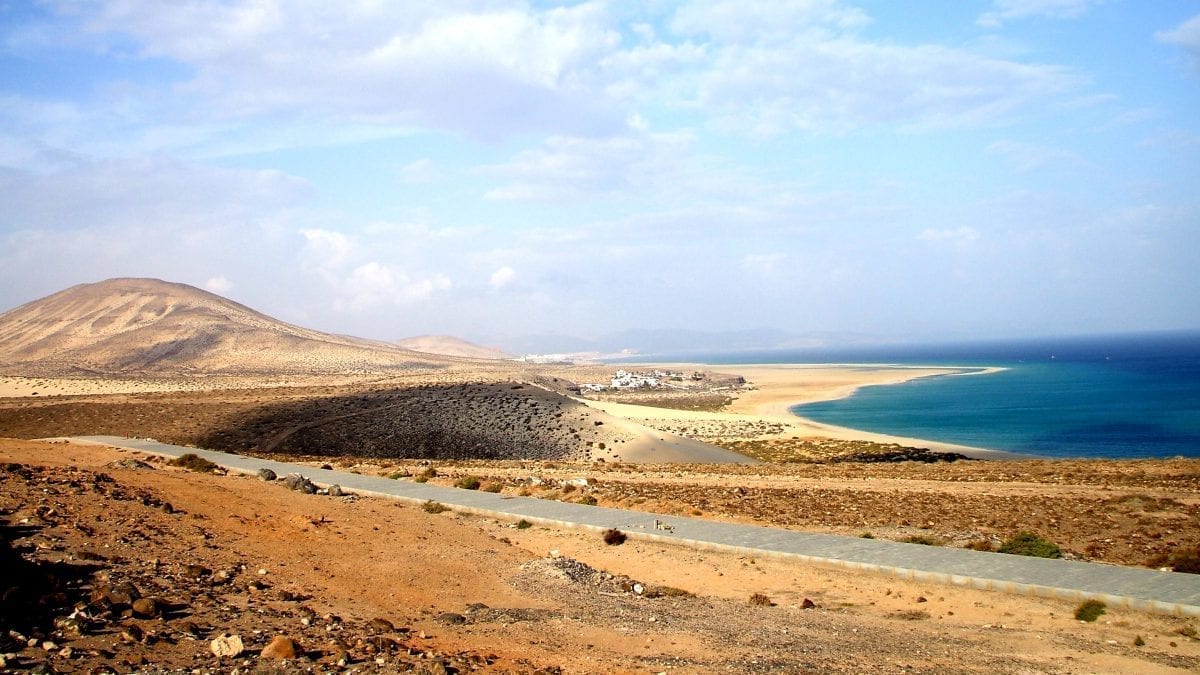 Marissa Carruthers takes an impromptu goat herding trip during an island-hopping tour of the Canaries.

The bar was nestled on the corner of a quaint cobbled street in southwest Fuerteventura, the second largest and oldest of Spain’s Canary Islands. After a tiring few days hopping from one island to the other, the bar seemed the perfect place to refuel for our final day on the archipelago. My four friends and I ordered a round of cervezas and the conversation quickly turned to the islands, which was the most beautiful, and which had etched itself most into our memories.

My favourite so far was La Palma, the first on our visit. Like all the others, it had risen from the Atlantic Ocean’s seabed following violent volcanic eruptions over the course of millions of years. But of the seven islands in the chain, La Palma was the youngest and, consequently, the most lush. Banana plantations hug gentle slopes that creep into the sea. Tufts of green, well-watered flora flank the mountainsides. I was recounting my impressions of La Palma when a gruff voice from the bar interrupted.

Juan turned out to be a local goat herder – the youngest in a long line and fading breed of people who form part of the dwindling agricultural industry that was the island’s lifeblood until word of Fuerteventura’s white sands and turquoise waters spread in the 1960s and tourism took over.

Shepherding in the Canaries, Juan explained, is akin to a Cirque du Soleil performance

Goat herding in the Canaries, Juan explained, is akin to a Cirque du Soleil performance. He spoke of shepherds flying through the air like acrobats. Using giant wooden, steel-tipped poles they leapt up harsh rocky outcrops, sprang over gullies, and whisked down steep crumbling embankments with ballerina-like grace, all in an attempt to keep up with their flocks.

He told us the practice, called the shepherd’s leap or salto del pastor, isn’t only a method of herding used by shepherds across the Canary Islands, it’s a popular folk sport, with athletes flocking to take the top title in the annual cross-island competitions held every year in late November.

Next, he was inviting us to join him the following morning on a goat herding trip. A group of five shepherds were rounding up wild goats that had spent the last few months foraging freely on the sparse shrubs that litter the countryside. We accepted the offer.

A short sleep later and we were being bundled into a battered green Land Rover. The bustling strip of bars and hotels gave way to rolling white sand dunes, then harsh shards of giant stone stabbing at the sky, then the smooth rise of red and yellow mountains crowned with halos of wispy clouds, aloe vera farms, the occasional white windmill, and finally the sharp fall and rise of steep ravines and sweeping valleys.

The 4×4 screeched to a halt in a patch of barren land. A half hour came and went. Then out of the silence came the faint jingle of bells coupled with bleating, and on the horizon plumes of rusty dust. Over the brow of the hill appeared one goat, then two, then three, then too many to count. The goats formed a brown and white river twisting towards us, their nimble feet dancing on the blanket of scree. The occasional shout of a shepherd steering the flock echoed across the rugged terrain.

The shepherds were herding Majorero goats – a sturdy breed adapted to cope with the harsh weather conditions and arid land – farther south to graze on the wild grasses and aromatic herbs that give the island’s succulent goat meat and thick, high-fat milk its distinctly rich and tangy flavour. We were to accompany them for the next seven kilometres, at which point we would break for lunch before the shepherds continued on their journey.

Keeping up proved daunting. The shepherds, most of them in their sixties or seventies, skipped over the parched island. The goats were even quicker. They disappeared down the dips ahead only to reappear as dots racing up the side of yet another mountain.

As the sun pounded on me, not even close to reaching its climax, I yearned to be hiking through the forest in the heart of La Palma, in search of the minas galerias, tunnels that stretch from thundering waterfalls in the mountains to cities, villages, and farms, providing islanders with their sole source of water. I recalled how standing on La Palma’s highest summit, overlooking the sea of clouds that lapped below, I had pulled my jumper around me and felt pangs of icy air pinch my skin.

Even amid the cacti-riddled lands of Tenerife, the largest of the Canaries, a cool respite could be found in the dappled shade of towering pine forests or atop Mount Teide’s 3,718-metre summit that stares straight into the cavernous mouth of the volcano that gave birth to the island.

But not on Fuerteventura. Fuerteventura is rugged rock beds, barren deserts of jutting stone, rough seas of swirling oranges and yellows and reds, interrupted, only intermittently, by small miracles in the form of shrubs. Shelter is as sparse as the sun is prolific. Lakes that once glistened with water are now nothing more than dusty plateau.

But none of the other islands had produced a character as unforgettable as Juan. I wondered about the connection between landscape and people, if it might be the case that sheerer terrain made for more memorable personalities. There was nowhere to hide in a place like this. You were always on display, opened up to the elements.

As for me, my energy levels were reaching an all-time low four hours later. But, as if on cue, a shepherd pointed to a speck moving way in the distance and said the words I’d been waiting so desperately to hear: “Our stop.” At the bottom of the hill was the herd of about 50 already-penned goats, a van full of bottles of sweating, ice-cold beers, and a roaring barbecue roasting goat kebabs.

“Hard work, yes?” Juan said, slapping me on the back before handing me a much-needed cerveza, after my day’s goat herding trek. I nodded, unable to speak for my panting, before tucking into one of the most succulent pieces of meat I’ve ever tasted in my life. “Yes,” I thought to myself as I looked out over my fiery surroundings, “Fuerteventura is by far the best.”

Goat herding is not the only activity to get up to in Fuerteventura, for more ideas, visit: https://www.fuerteventurainfo.com

For more ideas on where to go for some Winter Sun, why not consider Zadar in Croatia or a week in Barbados, or for the really adventurous how about Rio for New Years Eve.

Beyond Ecotourism - Our Responsibility