Continuing his South American saga Mark Bibby Jackson follows the path of many an intrepid voyager and takes a cruise around Cape Horn to the city of Punta Arenas in Patagonia Chile. 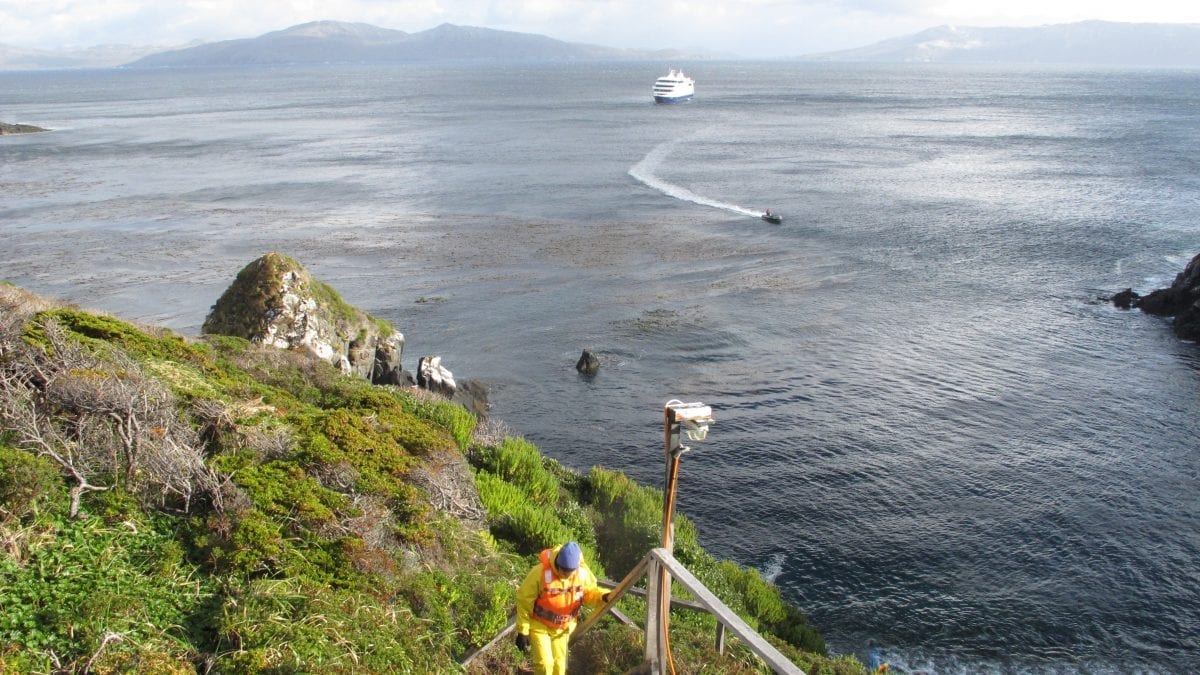 Continuing his South American saga Mark Bibby Jackson follows the path of many an intrepid voyager and takes a cruise around Cape Horn to the city of Punta Arenas in Patagonia Chile.

Despite my love of the sea I have never been on a cruise. I hate the idea of descending mob handed upon a tourist attraction like rampaging Goths or Huns leaving what is left of the local culture in our wake. The thought of being trapped on board for nights on end with people you have little – if anything – in common appals me, as polite conversations over shared dinner tables degenerate into heated political debates as the low-grade spirits start to flow in the bar.

Yet, it is a Patagonia cruise that I find myself on as I sail out of Ushuaia’s peaceful harbour.

I was assured that the Australis is no ordinary cruise, and the Strait of Magellan is neither the Mediterranean nor the Rhine. Solitude is what I am promised and solitude is what I get, up to a point, as I will have to share my vessel with juts under 100 fellow passengers.

On board there is no internet, no TV, no mobile phones – it’s like a floating retreat only without the yoga and meditation

Australis runs weekly cruises between Ushuaia and Punta Arenas in neighbouring Chile, travelling to Cape Horn and through the Strait of Magellan along the way. On board there is no internet, no TV, no mobile phones – it’s like a floating retreat only without the yoga and meditation.

Sailing through the night, our first port of call is Cape Horn itself. The crew seem concerned that the treacherous waves may be too choppy for our Zodiac boats to make a landing, but as we approach the most southerly island in the Americas, the winds calm and we are able to follow the path of many a shipwrecked sailor.

If you are considering applying for the position of lighthouse keeper on Cape Horn be prepared for solitude and more solitude. The current incumbent awaits us in full Chilean naval regalia as we approach, seeking relief from the chilling wind that has cut through my wind protector as though it were a flimsy disposable plastic poncho.

There’s not much to do on the island apart from walk the 100 metres or so to the monument that commemorates lost sailors and sign the book in the lighthouse, but at least I have been here – another notch on my travelling bedpost. Returning to the boat we take a minor diversion to see a pod of seals basking on an outcrop of rocks, our cameras flashing away at the dismissive creatures.

Drifting along, our only companions, just like the Ancient Mariner, are the occasional albatrosses that dog our course diving into the icy waters to catch their dinner. At the front viewing room one of my companions claims to sight a dolphin, though I think it more likely to be a trick played by the light on the flashing waves. Certainly there is no sign of human habitation on the long neglected shores. Australis assures that its two cruise ships are the only ones that plough these channels, and true to its word, once we leave Ushuaia’s proximity the only vessel we spot on the first two days of our Patagonia cruise is our sister ship passing in the opposite direction.

Our second stop is at Wulaiai Bay on Navarino Island, scene of a massacre of missionaries by the native Yaghan people in 1859. Robert Fitzroy, the captain of HMS Beagle came to these parts in the 1830s and returned to England with three local Fuegian children he had seized as hostages determined to turn them into good Christians. They soon became celebrities even visiting King William IV.

If you missed the first part of Mark’s travels through Patagonia, you can read it here.

Fitzroy returned a year later with the three Fuegians and a certain young botanist named Charles Darwin on the Beagle’s second voyage. While Darwin was to return to write the book that would challenge the very fabric of society, one of the Fuegians, Jemmy Button, remained on Navarino after apparently falling in love with a local woman. Speculation is that Button, like a good Christian, led the massacre of the missionaries almost 30 years later.

All that remains from that time is a solitary building turned into a small museum and an infestation of beavers left behind by ambitious settlers who believed they could make their fortune farming the animals for their fur. Sadly for the local environment, which suffers from the dams the animals build, their venture failed.

Back to the Ice Age

At night we sail through the Beagle Channel before reaching the Aguila Glacier, left stranded here once the last Ice Age melted away. The short walk to the creaking ice is pleasant enough, but nothing compared with the Perito Moreno that had dazzled me a few days earlier. I am happy to return to our boat and continue my vigil, staring out across the waters into bleak nothingness.

By the end of the second day, all my thoughts of internet and mobile phones have become as distant as the telegraph and gramophone. I settle into a familiar rhythm; occasional conversations with my fellow passengers interrupt my solitudinous reverie. The flow of my daily routine becomes as natural as the waters crashing into our ship’s bow.

We wake early on our third and final day to take the short trip to Magdalena Island, home to a colony of over 100,000 Magellan Penguins. I walk along the path beside the small birds nesting with their young in holes dug in the soil, towards the distant lighthouse. As I stop to take some photos, three penguins come up to me, staring as I point my lens straight in their faces, seemingly as bemused by my actions as I am by theirs. Only in Galapagos some 15 years ago have I encountered animals so lacking in fear of man.

This is to be our last stop on our Patagonia Chile Cruise before we disembark in Punta Arenas.

In truth, after the glorious isolation of the previous days the Chilean city comes as something of a jolt. Established as a penal colony by the Chilean government in 1848 and now a free port, the city has a compact centre which is easily navigated by foot in a few hours.

The most interesting building is the Nao Victoria Museum named after the ship in which Ferdinand Magellan’s first circumnavigated the world. Magellan himself was never to complete his journey, as he was killed in the Philippines, on his return. There is a full-scale model of the ship in the museum.

As it is a Sunday and the museum is closed, instead I head for the large Hotel Dreams that overlooks the Strait of Magellan, where I have the most incredible views of the waters below from its Sky Bar.

There I ponder my the final leg of my South American adventure which will take me to Easter Island – the most remote spot in the world – and my appointment with its famous statues.

For more information on Patagonia travel in Chile

Beyond Ecotourism - Our Responsibility