Looking for a break from Dushanbe, Johan Smits unwinds in a Tajik mountain sanatorium – Soviet style.

Travel Articles > Experiences > Wellness > Slowing Down in the Sanatorium 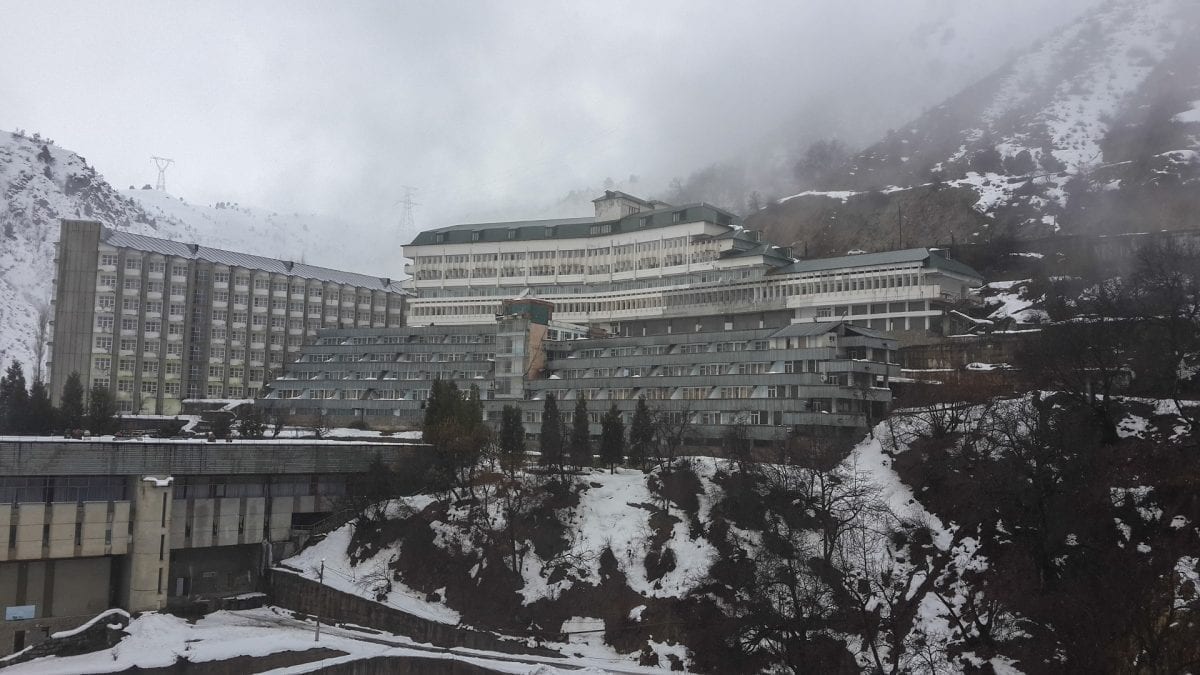 Looking for a break from Dushanbe, Johan Smits unwinds in a Tajik mountain sanatorium – Soviet style.

If someone asked you to sit naked on a bottomless chair and have radio-active water sprayed upwards onto your private parts, you might be forgiven for raising an eyebrow or two. Yet, that’s precisely what I willingly subjected myself to at Khoja Obi Garm, a Soviet-era sanatorium high up in the mountains of Tajikistan. What’s more, I might visit it again.

Although the sanatorium is located only 50km north of the capital Dushanbe, it’s a one-and-a-half hour journey by private taxi through a wild but graceful landscape. It’s winter and a white patchwork of snow has turned the surrounding mountainsides into a monochrome world, reinforced now and then by the royal-blue body of an abandoned Russian truck or the green, gabled roof of a single house.

As our taxi crawls around another bend in the road, the serene setting does nothing to soften the punch in the face that is the sudden sighting of Khoja Obi Garm. Hewn into the southern slope of the Hissar mountain range at an altitude of 2,000 metres, the health spa is a gargantuan lovefest of stone and concrete that would give any Bond villain’s lair a run for its money. This is a textbook example of brutalist architecture. 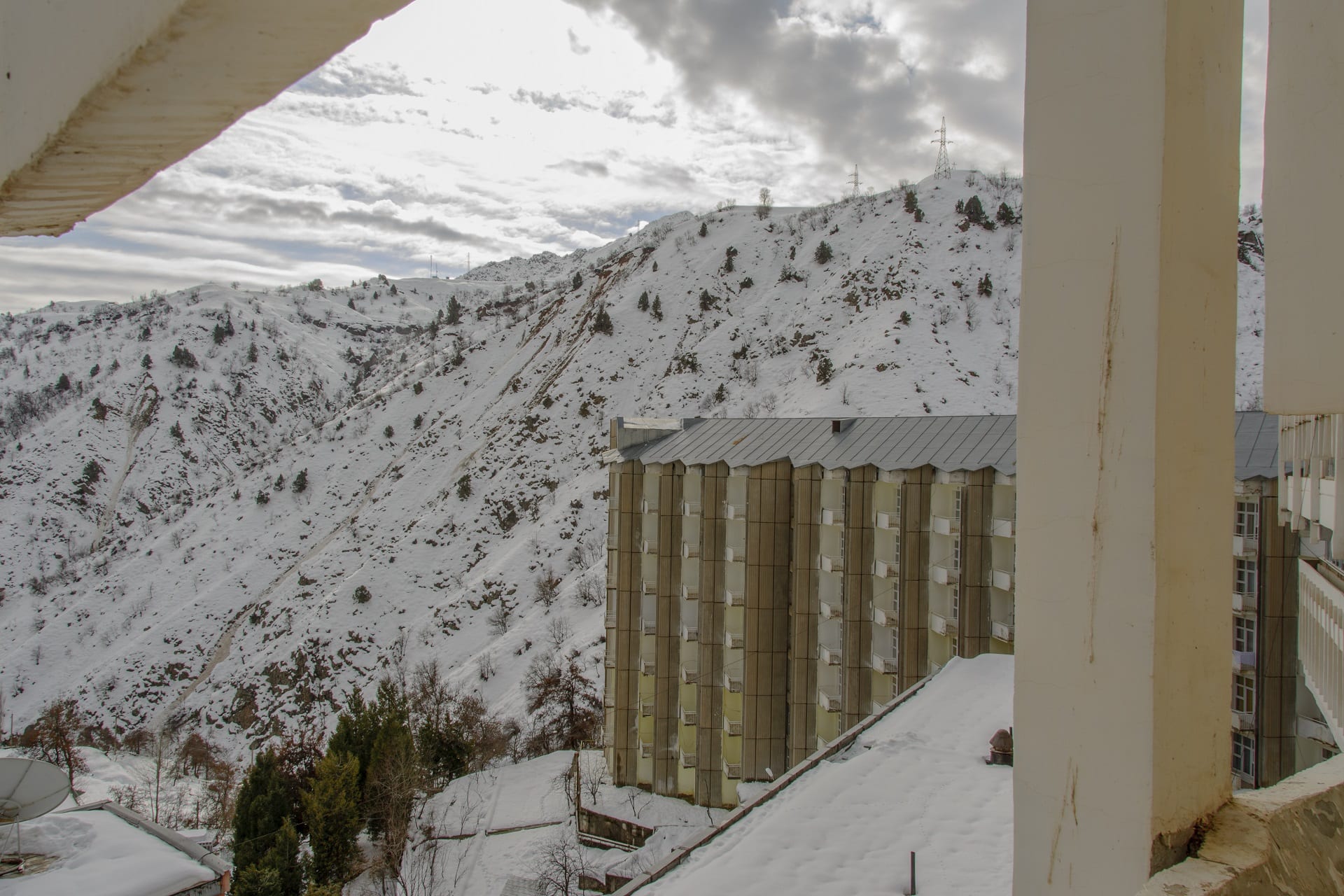 My wife and I have come here with our Russian-speaking friend Ingrida with the sole intention of spending two days resting, reading and walking in the snow. Two of the sanatorium’s 700 guestrooms are to serve us as accommodation, but soon we realise we would be missing the point if we didn’t try out some of the health treatments.

Before long, we’re shepherded away to see the doctor. When it’s my turn I enter an office where a moustached man in a white coat is waiting behind a desk. Instead of stroking a fluffy cat and saying he’s been expecting me, the doctor asks me a question. “Do you have problem?”

Not yet, I think, and shake my head. He takes my blood pressure, which against all odds is stable, and prescribes a course of steam showers with curative waters, a sauna session and massage. I walk out triumphantly with my little appointment booklet in hand.


In her book Holidays in Soviet Sanatoriums, Maryam Omidi explains that health spas were conceived in the 1920s where workers, thanks to state funding, could go on vacation. “Soviet utopian values permeated every aspect: western holidays were perceived as decadent. By contrast, sanatorium breaks were intended to edify and strengthen visitors (…) so they could return to work with renewed vigour.”

At Khoja Obi Garm, nothing seems to have changed. Forget the lemongrass-scented facemasks, the faux wind chimes music and microbiotic dining. In Soviet parlance, Spa must have stood for Spartan. My fellow visitors mean business. With great sense of purpose they move from one treatment room to another while dutiful nurses stamp their booklets as if they were time cards in a factory.

Later on, back in Dushanbe, I would discover to my surprise that the sanatorium has a website. In challenging English it explains about the showers: “You can implement all the impact – from the most gentle, gentle soul in the rain, where water trickles into the body hit the sides, creating a sense of very light jabs to the powerful, and reinforcing effects of quenching Sharko shower, where a strong jet of water shoots into the body distance of five to six metres”. 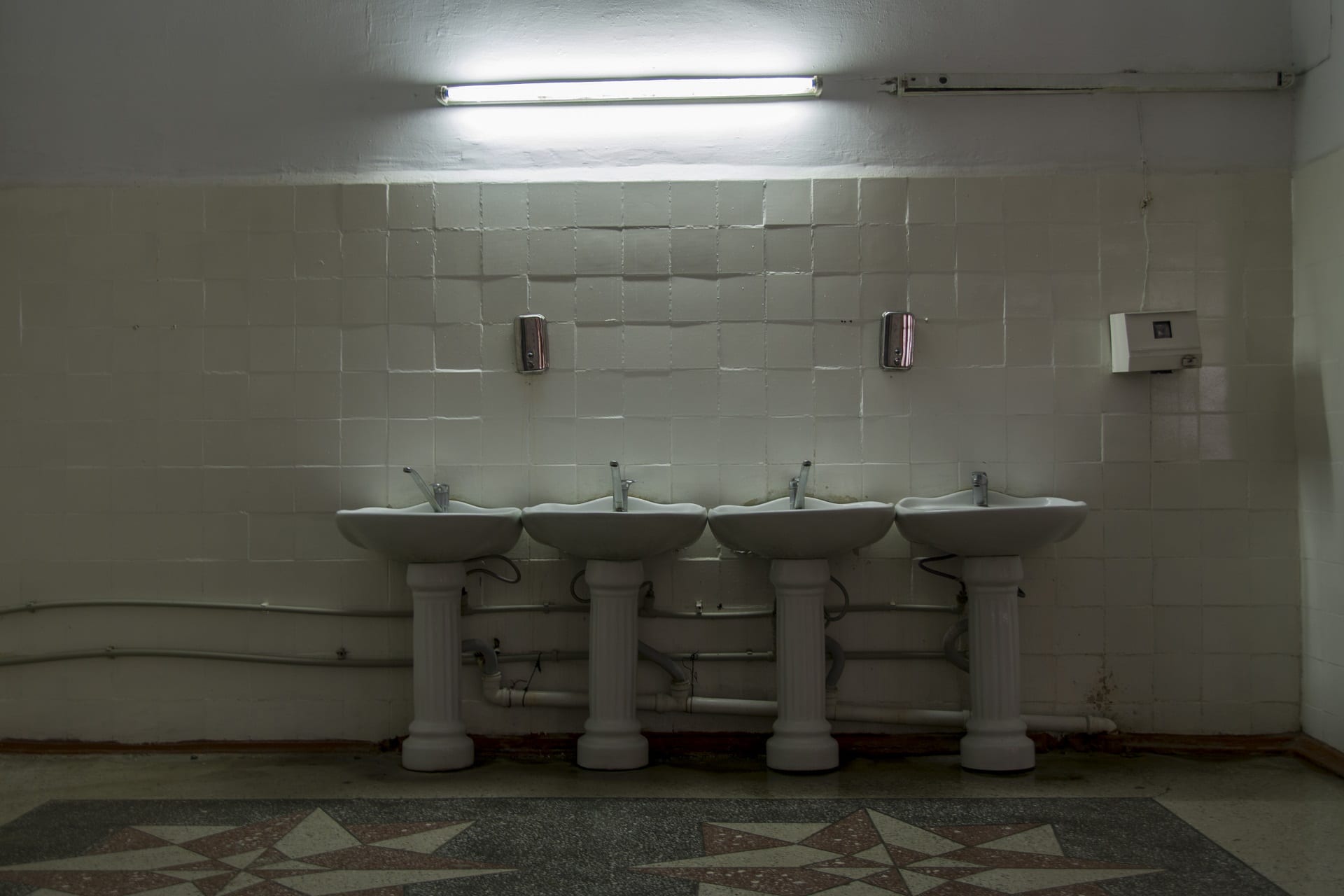 Fortunately, this information is not imparted to me when I enter the steamy room wearing nothing but an inadequate loincloth. In it, five stone alcoves house different showers, from the familiar rain shower, via a circular one where squirts of water massage your body 360 degrees, to the more esoteric bottomless chair. The sanatorium sits over a natural spring whose waters contain radioactive radon that is said to be curative, and it is this property that the area is famous for.

In a country where the medical infrastructure is deplorable, it’s not surprising that Tajiks come here in the hope of preventing illness rather than sheer indulgence. At around $30 for the most expensive Lux room including three meals a day and some of the basic treatments, this is an affordable way to stay healthy. There is also a spirit of camaraderie which is most palpable in the huge communal dining room, and even more so in summer when during evenings people gather in the entertainment hall to recite poems, sing local songs and dance.

That night, over dinner, I ask my female companions about their experiences.

“Unlike you wimps, we ladies were all in our birthday suits,” my wife says, and recounts how she practiced her Russian vocabulary on half a dozen of fellow spa goers. “You wouldn’t expect to see them all naked when they’re usually dressed up so modestly in their traditional outfits.” I certainly wouldn’t.

The next day, prejudiced about what a Communist-style early-morning massage might be, I skip it and instead have a decadent lie-in. In the afternoon, the sauna – an old, separate building down the road – is open for men. I decide to try it out. It’s a small, steamy, cave-like room with thick, stone walls and little light, but it does the job. Half an hour of sweating later, I feel like a new man and ready for a hike in the outside cold. The snowy landscape is magical and desolate, and from up high the sanatorium takes on a surreal appearance. I encounter nobody. For travellers on their way to the Pamirs or Fann mountain ranges, this area offers an ideal opportunity for some serious foreplay. On our final day, the sanatorium has grown on me. Its crumbling vastness fascinates me and, camera in hand, I explore its long, empty corridors acting as if I own the place. The few people I encounter ignore me. Fortunately, I don’t bump into Jack Nicholson filming a Russian remake of The Shining, but rather old, stained-glass windows and decorated stone floors.

You’re not in Thomas Mann’s The Magic Mountain here – the meals are at best basic and the rooms are modest – but the appeal of Khoja Obi Garm is in its atmosphere. This is the real deal of what Soviet holidaymakers took part in 60 years ago, and visiting it has helped me understand their ideology a little bit better.

Before leaving our room I check myself in the mirror for signs of radioactive glowing, but the blush on my face is a healthy one. The Tajiks have got it right, I conclude. Just don’t read the website before you visit.


From Asia: Air Astana (www.airastana.com) flies from Bangkok with a stop in Almaty. From Europe: Somon Air flies direct to Dushanbe from Frankfurt (www.somonair.com). Air Astana has flights from London and other major European cities with stops in Astana and Almaty. Turkish Airlines (www.turkishairlines.com) has flights to Dushanbe with a stopover in Istanbul.

The road to Khoja Obi Garm can close during heavy snowfall in winter, but is easily accessible during the rest of the year. Spending a day there would be a good way of acclimatising your body before heading into higher altitude mountain areas. There is no or very little English spoken at the sanatorium. A Russian or Tajik speaking companion or guide would be useful.