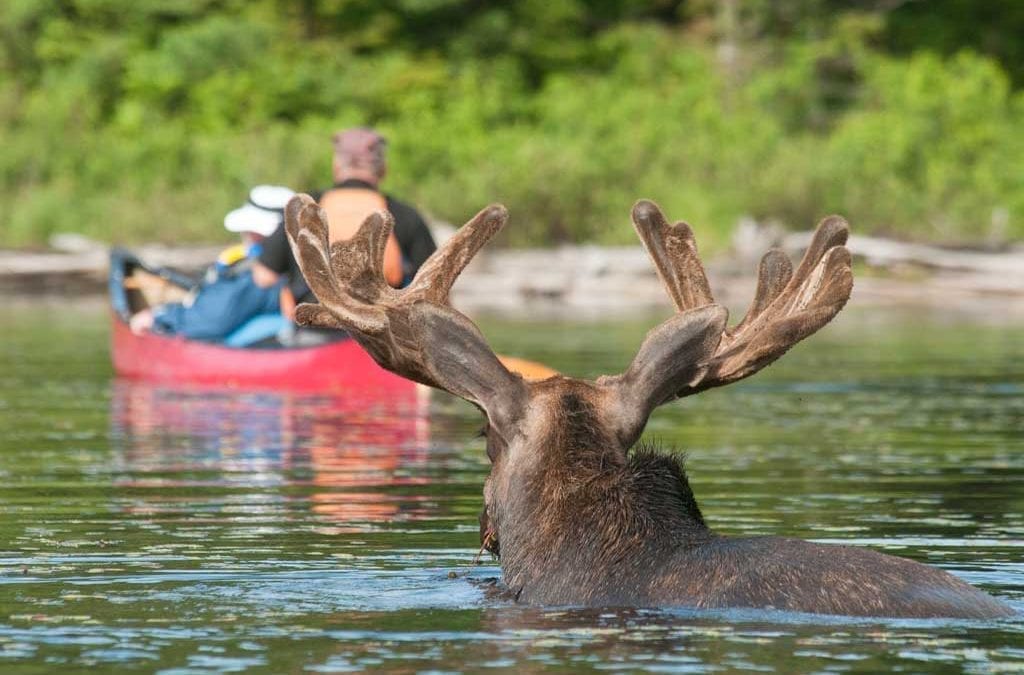 2018 is shaping up to be another hot year to visit Ontario, following Canada’s 150th anniversary in 2017. As the province welcomes the launch of Le Boat on the Rideau Canal, celebrates the 125th anniversary of Canada’s Provincial Parks and greets a host of new hotels and flight routes, there’s never been a better time to visit Ontario. Here’s a round-up of why the province needs to be on your must visit list for 2018.

Be one of the first to cruise down the Rideau Canal with Le Boat: Le Boat, Europe’s largest self-drive boating company, will be launching the company’s first North American base of operations in 2018 on Ontario’s historic Rideau Canal. Visitors will hop aboard their new vessel in the picturesque town of Smiths Falls – a 45 minute drive from Ottawa – where a fleet of 16 state-of-the-art Horizon cruisers will be awaiting, before travelling out on anything from a short escape to an epic expedition, and taking in the delights of everything from vibrant Ottawa to cultural Kingston. Booking is now open for the Ontario programme, with the boating season officially launching in May 2018 and running through to October each year. These vessels are equipped with bow and stern thrusters for easy maneuvering as well as being completely bumpered for safety. Unlike conventional cruises, Le Boat allows its guests to follow a suggested itinerary which allows them to visit the towns and attractions that interest them most on a particular route.

Fly on one of the UK and Ireland’s new flight routes: British Airways has announced a new route from London Gatwick Airport to Toronto Pearson International Airport from 1st May 2018. The thrice weekly route will be BA’s first service to Canada from Gatwick, adding to its existing flights from London Heathrow. These summer fares start from £453 return and will operate on Tuesday, Friday and Sunday. From Ireland, Aer Lingus has announced plans to boost its Dublin-Toronto route this winter with a 96% rise in capacity. The airline will fly the route four times a week on a larger Airbus A330, compared to three flights a week for the same period in 2016. Budget airline, Primera Air has also announced two new routes to Toronto from London Stansted and Birmingham next year. The London- Toronto route will commence in June and Birmingham-Toronto will start operating in May. The new flights will be operated on Primera Air’s new Airbus A321neo aircraft, with a choice of two cabins – full service premium and low- fare economy. Flights are now on sale with prices starting from just £149 one-way inclusive of all taxes, fees and charges.

Rest your head at one of Toronto’s new hotels: Visitors to Toronto now have even more choice when it comes to quality accommodation thanks to the new opening of The Anndore House, conveniently located at Yonge and Charles close to the city’s famed Yonge and Bloor intersection and a short walk from parks, galleries, theatres, shops and nightlife. Additionally, one of Toronto’s most highly anticipated new openings, the Broadview Hotel opened at Queen and Broadway this summer. The 58-room hotel boasts a lobby restaurant and a stunning rooftop terrace with panoramic 360 degree views over the city. The Bisha Hotel in Toronto is another highly anticipated opening. The boutique hotel offers 96 rooms complete with 10 luxury suites and one two-story Exclusive Suite, and can be found at 80 Blue Jays Way in Toronto’s Entertainment District. Bisha offers four different dining venues, including a rooftop restaurant with patio and pool, and sweeping views of Lake Ontario, the CN Tower and city skyline.

Treat yourself to a stay at Prince Edward County’s new boutique motel: The June, a 16-bedroom boutique motel with four different styles of rooms ranging from classic to a rosé suite, is a stunning new opening with quirky, on- trend décor, in Prince Edward County. The motel is home to the Lobby Bar where guests can come together to enjoy local beer, wine, and small bites as well as campfires and lawn games; a grab & go breakfast service with a range of fresh-pressed juices and pastries which can be taken back to the room or be enjoyed on the road; a breakfast in bed service for those wishing to truly indulge; a yoga class every Saturday morning followed by mimosas at the Lobby Bar; a text message concierge service; a girls getaway package which includes add-on bubbly, in-room facials, and decorations; and a number of pop ups including tastings with local wineries and breweries.

Go behind the scenes of Netflix’s hottest new series, Alias Grace: Netflix’s hottest upcoming series, Alias Grace – another Margaret Atwood classic following The Handmaid’s Tale – was largely filmed in Kingston. One of the starring characters is Kingston Penitentiary, a former maximum security prison located between King Street West and Lake Ontario. This filming location is key in the series at it is where Grace is convicted and then imprisoned. Visitors now have a rare and unique opportunity to go behind the bars of Canada’s oldest and most notorious prison which was closed in 2013 and designated as a National Historic Site of Canada. Tours are available from $35 per person (aged 6+). Alias Grace is slated for release in November on Netflix.

Immerse yourself in the magic of Fort Henry’s new winter sensory experience: Where Lake Ontario meets the St Lawrence River in Fort Henry National Historic Site, the spirit of winter has been captured with a new multimedia sensory experience, Lumina Borealis. This interactive theatrical event takes visitors along a 1km pathway, across wintery landscapes, in an experience that is suitable for all ages. The Lumina Borealis takes about 45-60 minutes to complete and highlights include forests of Christmas trees, illuminated, interactive icebergs, and high-tech light and sound shows that will bring this winter wonderland to life. The show was created for the St. Lawrence Parks Commission by Moment Factory. Tickets are $12 for adults, and free for children under five.

Continue Canada’s 150th celebrations: 2017 marked the 150th anniversary of Canada and the country’s capital, Ottawa was the place to celebrate the historic milestone. Numerous events have been held year-round including ‘Ignite 150’ – a series of epic stunts and gatherings, including a yoga session on a barge accompanied by a live orchestra and a gourmet dinner 50 metres in the air. The year-long celebrations also included the hosting of the Red Bull Crashed Ice World Championships and a spectacular Canada Day party on Parliament Hill. Following this comes the Ottawa Legacy – a series of city-wide projects designed to bring dramatic change to the capital’s urban landscape. These include a new Light Rail Transit Confederation Line; the reopening of the Ottawa Art Gallery after a $100 million redevelopment; and the revitalisation project of Main Street, which will see a new public gathering space called Main2, designed by artist Stuart Kinmond. Another initiative will see 1 million trees planted in Ottawa’s green spaces and rural communities.

Get into the spirit of winter as Winterlude celebrates its 40th anniversary: One of Ontario’s most exciting winter festivals, Winterlude, will celebrate its 40th anniversary in 2018. Taking place from 2nd-19th February 2018 in Ottawa, visitors have the chance to skate along the UNESCO World Heritage Rideau Canal – the longest ice skating way in the world at 7.8km long – as well as watch the 38th annual Accora Village Bed Race, which sees costumed teams race huge decorated beds across the frozen ice! There’s also an opportunity to enjoy live music, the Snowflake Kingdom (the world’s biggest snow playground), as well as a number of culinary events.

Explore the Canadian Museum of History’s new Canadian History Hall after its revamp: Designed by world renowned Canadian architect, Douglas Cardinal, The Canadian Museum of History is an architectural gem which features the world’s largest indoor collection of totem poles, the First Peoples Hall, blockbuster exhibitions, a 3D IMAX Theatre, and the Canadian Children’s Museum. The museum, located just outside of Ottawa, has recently finished renovations on its Canadian History Hall, which tells the history of Canada and its people from the dawn of human habitation to the present. Through authentic artefacts and compelling human stories, the Hall explores the events, personalities and historical currents that have shaped Canada as we know it. The new hall opened on the 1st July 2017, on the 150th anniversary of the Confederation of Canada.

Treat yourself to a day’s rest and relaxation at Nordik Spa’s latest venture: Following the recent successes of The Nordik Group’s ‘Spa-Nature’ spas across Canada, the company has announced plans to open a new site next to Cullen Central Park in Whitby, Ontario. The group’s spas offer a rest and relaxation experience in the heart of nature to improve guests’ health and wellness. Their state-of-the-art facilities offer visitors the chance to try a number of treatments inspired by the traditions of Scandinavian countries such as the thermal cycle involving the alternation between hot and cold, followed by a period of rest. The new relaxation centre in the heart of Whitby, just 35 minutes’ drive from downtown Toronto, will have capacity for 700 guests and offer dry saunas, steam saunas, outdoor pools, waterfalls and multiple outdoor and indoor rest areas. A range of massages, body treatments, and wellness rituals will also be offered to provide guests with the ultimate relaxation experience. The spa is expected to open in the summer of 2019.

Learn about Canada’s Prohibition: For the first time in 16 years, visitors to the famous Hiram Walker and Sons Ltd. distillery in Windsor will be able to take a tour of parts of the distillery. The distillery has teamed up with WindsorEats to organise a new tour called Drinks of Walkerville, which will include the distillery’s fermenting and distilling building, whisky tasting at the brand new centre on Riverside Drive, a walk through Walkerville including a stop at the Walkerville Brewery and the Willistead Restaurant. The tour will also explain the history of Canada’s Prohibition. Tickets are $85.

Things to Do in Siem Reap Avoiding Angkor