On Day 8 of the Tuk Tuk Diaries, Mark and Jen head for Pai Thailand, a town shrouded in travellers tales, and regret staying there a couple of nights. 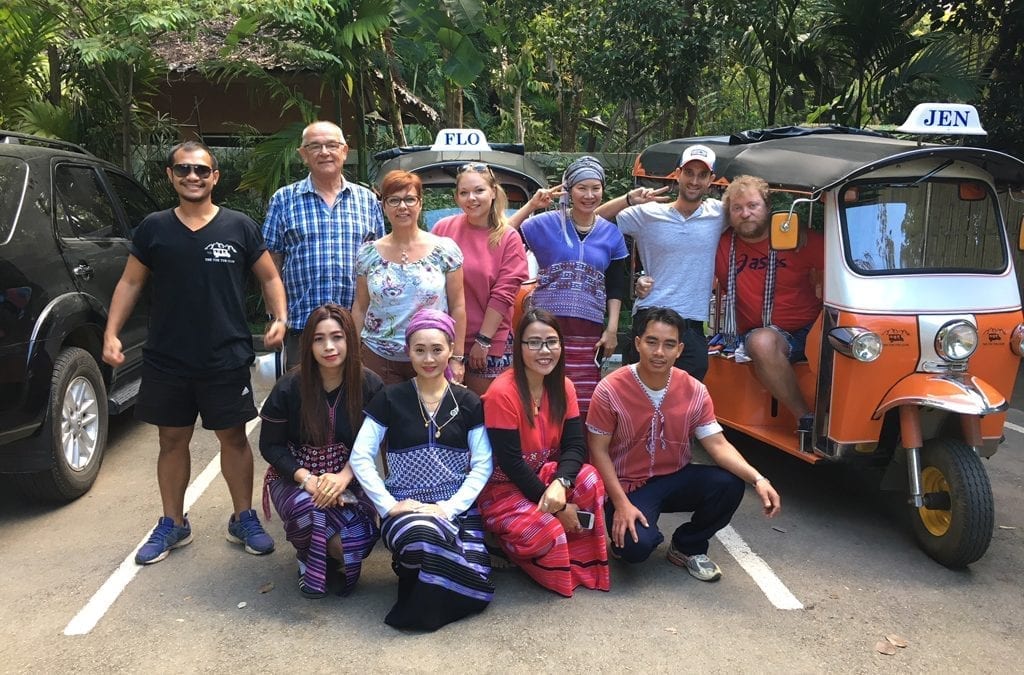 On Day 8 of the Tuk Tuk Diaries, Mark and Jen head for Pai Thailand, a town shrouded in travellers tales, and regret staying there a couple of nights.

We were given a rousing send off by the staff at Fern Resort, all of whom seemed to want to have their photograph taken with the tuk tuks. If it continues this way, Graham and Smithy might need to add an extra thirty minutes for our check out.

One of the things about traveling is experiencing both highs and lows. This is what separates it from the mundane. Yesterday Rachael experienced both. The despair of realizing she had to clamber back down the rocks she had just climbed, and the high of her most spectacular birthday meal.

On such a trip as ours, the main concern is technical problems. And today we experience our first one, as Nigel detects a rattling noise above his head. We briefly stop to check whether it’s anything serious before carrying on. Only to stop a short while later as a bolt lands on his lap. Fortunately, it has only fallen from one of the wing mirrors, and after Graham and Nigel carry out some running repairs we continue on our way. Jen was fine.

Arguably the drive into Pai is the most spectacular on our trip with sweeping panoramas of the verdant countryside. One of the weird things of driving a tuk tuk in mountainous terrain is you use a higher gear for climbing the mountains than when descending. As I see the road rising I put Jen in fifth, easing down to fourth as the hill becomes more steep, and only revert to third when I have no alternative. When descending I slip into third early, listening to Jen over-revving as the clutch acts as a break. It seems totally counter-instinctive, but this is how we manage to preserve the breaks. Other vehicles fare less well, the smell of burning rubber as they pass an indication that their breaks are working overtime.

To discover more about Thailand, read Travel Begins as 40’s ‘Essential Travel Guide to Thailand Holidays for the Over 40s’.

We arrive at the Phu Pai Art Resort, a few kilometres outside of Pai. Set in some farmland, this really is getting back to nature, and as I relax in the pool I feel that I am an intruder in a foreign land, especially as a farmer strims the now unwanted rice paddy in a neighbouring field.

In the evening, we take a minibus to Pai. When I returned to Bali in 2014 for the first time in twenty years, I felt quite despondent at the way the place had changed. All that was unique had now become universal. I feel the same was as I walk through the endless market at Pai, until I find sanctuary in a bar and a bottle of Leo. The only difference is I have never been to Pai before.

Only I have, earlier this year but then the town was called Pokhara and it was in Nepal. I’m afraid this is the inevitability of the expanding backpacker circuit. I could be sat anywhere in the travellers’ world – only the brand on the beer bottle changes, thought there is always Heineken if you really want that sinking, universal feeling. Indeed as I reminisce, I recall a market in London near Angel station that has the exact same feel to it.

This is my low point on the trip, which is only slightly improved by teaming up with Smithy and beating a few travellers at pool, although I think Jen could have given them a run for their money such is their lack of prowess with cue in hand.

I would prefer to get back on the road again the following day, but it’s another day of rest for Jen – and this time also for us. No trek into the forest’s slippery slopes today. Instead, we visit in the morning and the sunset point at Pai Canyon in the late afternoon. While the former was tranquil and a great place to relax, the latter seemed to have drawn every visitor within a hundred-kilometre radius, most of whom left disappointed as the sunset was a bit of a no-show due to excessive cloud cover.

As I retire to bed, only one day remaining on my trip I can’t wait to get back into the saddle. Pai Thailand might be a huge disappointment, but we have to experience such lows to appreciate the highs greater.

On Day 10, Mark travels along the road least travelled to end up back at Mae Wang, where Jen can return to her tuk tuk mates.

To get more information on how to get off the beaten road with The Tuk Tuk Club, click here.