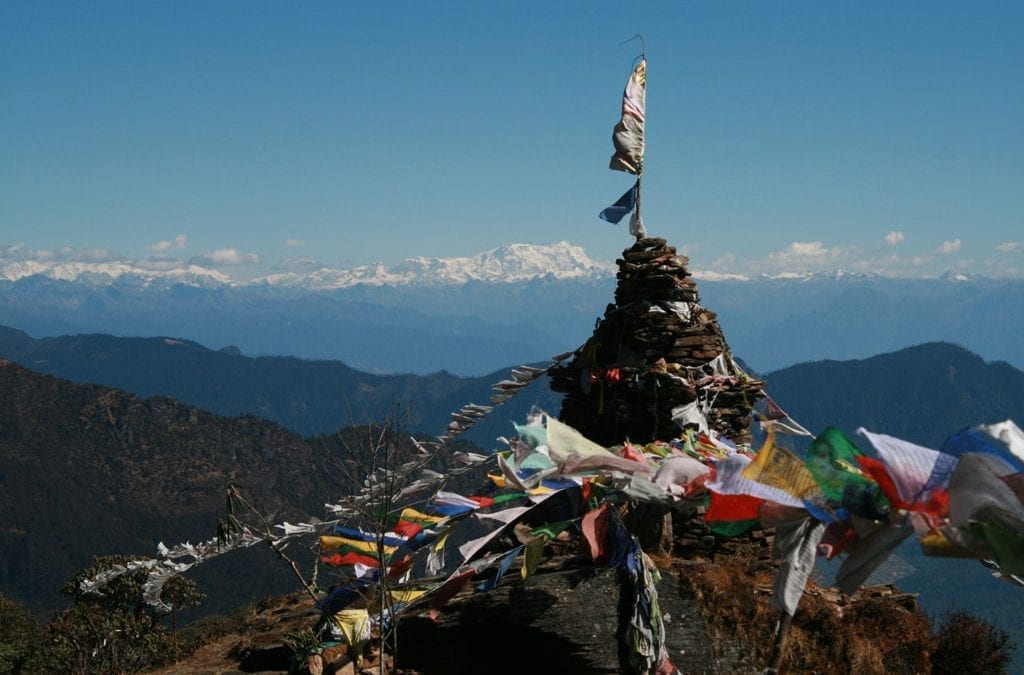 Vast landscapes and wide open skies are defining features of Bhutan and there are few better ways to see them than on the Druk Path Trek.

Generally undertaken across five days, the Druk Path Trek is one of Bhutan’s most iconic hiking trails. It is relatively accessible throughout the year, but it’s best to try and travel in April, May, October or November to coincide with high pressure weather fronts. This means that the skies are likely to be clearer, allowing for breathtaking views across the surrounding peaks and valleys.

Historically, the path was the only connection between Paro and Thimpu, Bhutan’s capital city. However, since the country’s Lateral Road opened in the late 1960s, the path fell into disuse; frequented only by yak herders and occasional trekkers. Its popularity has increased in recent years, but it still offers a unique and unforgettable insight into rural Bhutanese lifestyles and landscapes.

As the site of Bhutan’s only international airport, the Paro Valley is where your Druk Path trek is bound to begin. Far more than just an inevitable transit stop, the valley is home to a beautiful town which bears its name and is the perfect place to adjust to the altitude before your trek begins. Sitting at approximately 2,200 metres above sea level, and almost entirely surrounded by mountain peaks, Paro is not only incredibly scenic but is also home to a handful of the country’s most iconic sites.

Perhaps most recognisable is Paro Taktsang which is locally known as Tiger’s Nest Temple. Perched on a clifftop overlooking the town, it has been a site of Bhutanese pilgrimage for over 300 years and offers incomparable views of the valley below. Although the 3.5km ascent is steep, taking it a leisurely pace and staying hydrated makes it accessible for most travellers. The town itself is also worth a wander; its compact streets are lined with colourful wooden shop fronts and quaint cafés, which are perfect for a coffee break. A short walk from the main promenade you can also find Bhutan’s National Museum, a treasure trove for anyone with an interest in Himalayan culture and history. With so much on offer, make sure you set aside a few days to explore the valley’s highlights before heading out into the Bhutanese wilderness.

Setting out early, most trekking groups tend to assemble at the watch tower just above Paro Dzong. There you will can hand your luggage to the porters and prepare for your Bhutanese wilderness experience. This first day of the trail connects Paro with Jilli Dzong, a 16th century fortress and monastery that was built as a rest stop for travellers on the Druk Path.

Following a dirt track leading off from the watch tower, the first hour of the trek meanders past farmhouses, clustered villages and apple orchards. Much of the layout and architecture of the region has remained unchanged for centuries, and the track gradually fades as you reach the edge of Paro’s blue pine forest. Here the trail becomes a little more demanding, undulating up and downhill until you reach a mani wall near the edge of the forest. Mani walls are made up of intricately carved stone tablets and are a symbol of Buddhist devotion. Most are inscribed with the phrase ‘Om Mani Padme Hum’ which translates to ‘Hail to the Jewel in the Lotus’.

From here, the walk winds out of the forest and onto a mountain ridge which offers incredible views of Paro and its surrounding valley. In the distance, the outline of Jili Dzong marks a visible end point to the day’s exertions. The last few hours of Day 1 are spent on the ascent, rising up though more blue pine forest, sprawling bamboo and carpets of wild rhododendrons. Upon arrival at Jilli Dzong, which towers at 3,520 metres, you will find camp set up in the meadow below it. Settle in for an unforgettable sunset and enjoy dinner under the stars.

After an early breakfast, hike back to the mountain pass and up to Jilli Dzong. Its impressive location on a ridge overlooking the Paro Valley makes it the perfect spot to admire what Bhutan is most famous for; its incredible Himalayan landscape.

The Dzong is also still a functioning monastery and visitors are permitted as long as they remove their shoes and leave their cameras behind. The air is thick with incense and choral singing and you are encouraged to leave an offering at the main altar before heading out for another day on the trail.

From the Dzong, the trail follows the ridge and then enters thick forest. As the path snakes to the east, you are likely to see yaks and their herders as well as incredible views across the snow capped Himalayan range. The last hour of the day is spent on the ascent, forging upwards to reach Jangchulakha; a sprawling meadow where you will spend the night.

On a clear day, this portion of the trail is a photographer’s dream. The Himalayan mountain range is spread across the horizon and the views from the trail ridge are some of the most spectacular in all of Bhutan.

The first few hours of the day are spent in fairly steep ascent, climbing up grassy slopes scattered with juniper bushes and rhododendrons. Above the treeline, large alpine lakes dot the landscape and Mount Jomolhari, locally believed to be the home of protective Buddhist goddesses, looms in the near distance. Its considerable height, over 7,300 metres, and its religious significance means that there have only been six recorded ascents.

With the mountain on the horizon, the trail bends downwards through the forest towards Jimilang Tsho Lake, your third camping spot. The lake is locally known for its high giant trout populations and fishing permits can be obtained in advance of your visit. It’s also stunningly beautiful and, far away from cities and towns, the views of the night skies on offer are near unparalleled.

On this penultimate day of the trek, you will cross seven minor mountain passes as you head towards the Thimpu Valley. For an unforgettable view, head up the hill to the left of Thujedraj pass to reach a rocky outcrop which towers over the landscape below. Simkotra Tsho, a large alpine lake, dominates the foreground but behind it you can see the outline of Mount Gangkar Punsum, the highest unclimbed peak in the world. Rising 7,570 metres above sea level, it’s a humbling sight for even the most seasoned adventurous traveller.

Back on the trail, the terrain is varied – rising up and down as you cross the passes. The last of the seven, Phume Le, is particularly spectacular. Looking down you can see the sprawl of the Thimpu Valley and the spectacular Phajoding Monastery perched on a hillside. The monastery was founded in the 13th century and is one of the most revered devotional sites in Bhutan. To this day, it is home to around 80 young monks and provides a refuge for boys from disadvantaged backgrounds. Descending from the pass, the monastery is an ideal stopping point for those with an interest in Bhutanese culture and history. From there, it’s a short walk down into the clearing below to set up camp for your final night under the stars.

The final day and it’s all downhill from here. Heading out early, you’ll meander down through the forest to rejoin the road that connects Paro to Thimpu. A short transfer takes you from the wilderness and into Bhutan’s thriving capital city.

Article provided by TravelLocal. TravelLocal helps you to create bespoke holidays your way, by putting you directly in touch with carefully selected local experts in your destination. No one knows a country better than the people who live there and buying direct offers better value, a more authentic experience and a fairer deal for the people on the ground. Create your perfect personalised trip to Bhutan with TravelLocal’s local experts.

Inspired by this article, why not try trekking in Nepal instead, along the Poon Hill Trek, or in the Tajikistan Alps.