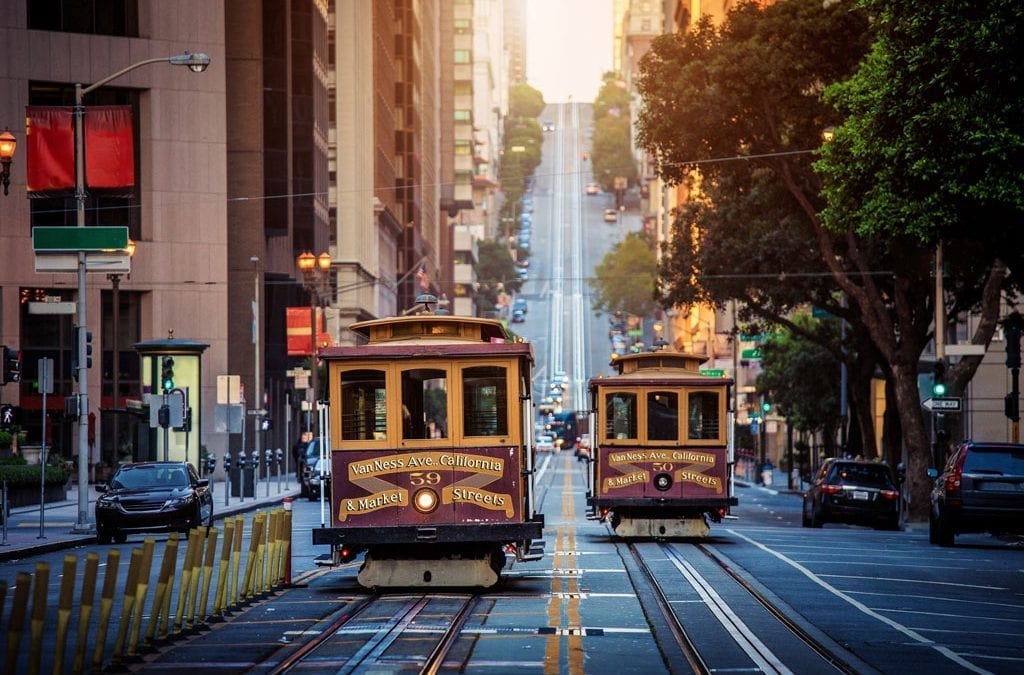 San Francisco’s culinary scene is committed to excellence, and has now been awarded more three-Michelin starred restaurants than New York. With the huge production of fruits, vegetables, seafood and livestock in surrounding areas in California, chefs are able to create fresh authentic meals that are enjoyed by both locals and tourists. Home to an array of restaurants representing the cultural diversity of the city with food from all around the world, San Francisco serves up burritos at La Taqueria in the hip Latino Mission District, dumplings at Yank Sing in Chinatown, the largest Chinatown outside of Asia, Clam Chowder at the Boundin Bakery (served in their famous sourdough bread) or pastries at the popular Tartine Bakery.

With the location of San Francisco at the tip of a peninsular surrounded by the Pacific Ocean and San Francisco Bay, it’s no doubt that the views would be spectacular. Many locations around the city offer hiking opportunities with spectacular views. The Presidio is a former military post, and is now a national park site and recreational paradise featuring breath-taking views, beautiful trails and architectural treasures. Visit the Presidio for a hike, a walking tour, a picnic or visit the Walt Disney Family Museum for an interesting Disney exhibit. For a 360-degree view of San Francisco, take the Twin Peaks hiking trail (duration: 45 minutes to an hour), the second highest peaks in the city. Of course, no trip to the Bay area is complete until you have visited the Golden Gate Bridge, the 1.7 mile suspension bridge connecting San Francisco Bay and the Marin headlands and offering views of the city skyline. Blazing Saddles offer a cycling route along the bridge and down to the seaside towns of Sausalito and Tiburon, with a return by ferry.

San Francisco is among the most diverse places in the US, an eclectic city filled with people from every background possessing a rich history, thriving culture and amazing diversity. Visit the local neighbourhoods to experience the diverse culture for yourself.

San Francisco’s SoMa district is one of the most rapidly changing and happening parts of the city. Read Things to Do in San Francisco SoMa District.

Up-and-Coming Neighbourhoods you must visit:

Each of San Francisco’s neighbourhoods have their own culture and charm to offer, shaped by industrialisation and redevelopment. Steer away from the crowds and visit some of the city’s lesser known up-and-coming destinations including Dogpatch, Hayes Valley, or SoMa (South of Market) for an equally unique experience.

For the sports enthusiasts, visit AT&T Park for the baseball season between April and October, and see San Francisco’s Major League baseball team the Giants. Even when the Giants aren’t in town, AT&T Park offer a behind-the-scenes tour where you can still experience the breath-taking Bay view. AT&T Park is located centrally and can be accessed easily by public transport.

If basketball is more your sport, cheer on the 2017 NBA Finals Champions, the Golden State Warriors based in Oakland known previously as the San Francisco Warriors in 1961. The Chase Center currently under construction, will welcome the Golden State Warriors back to San Francisco to their new home that is set to open before the 2019-20 NBA season. Basketball season occurs between October-April. For the American football fans, watch the San Francisco 49ers play, the city’s very first professional major-league sports team playing their first game in 1947 and joining the NFL in 1950. The team moved in 2014 to play at the Levi Stadium in the Bay area.

Rather than visit San Francisco why not pop in on Pittsburgh? Read Things To Do In Pittsburgh Before You Die for some inspiration.

With the location of San Francisco in one of the largest wine production regions of the world, tasting the local liquids is a must. Visit some of the alternative bars throughout the city, offering a mix of themed experiences including tiki-themed lounges serving the Mai Tai cocktail, a quintessential tiki drink that was said to have been created at Trader Vic’s in Oakland in San Francisco’s East Bay.

Smuggler’s Cove brings guests into a pirate wonderland, decorated with long ship beams, rum barrels, anchors and an indoor waterfall. With a serious reputation for great cocktails, it has one of the largest rum selections in the US. Additionally, the Tonga Room and Hurricane Bar located at the iconic Fairmont Hotel is a tiki-themed lounge offering a theatrical atmosphere including live entertainment, dancing around the ‘lagoon’ which was the former hotel pool, and special-effects thunder and lightning. For a literary themed cocktail experience visit Novelta in downtown San Francisco, offering literary hero’s inspired cocktails in a both classic and contemporary setting.

Escape to California’s famous wine country on a day tour out of the city, America’s premier viticultural region that has earned its reputation among the world’s best. Taste regional varietals at different wineries in Napa Valley and Sonoma County, including Napa Valley’s renowned Cabernet Sauvignon, or Sonoma’s most widely grown Chardonnay. Take a further drive towards California’s capital, Sacramento for a trip back in history to California’s Gold Rush days, with underground tours, horse drawn carriages and 28 museums covering everything from medical history, to art and the railroad. Visit Sacramento downtown’s up and coming hip R Street, with alternative stores, coffee shops and restaurants.

For more information about when to visit San Francisco

For Sacramento, visit www.visitsacramento.com and for Sonoma County, visit: www.sonomacounty.com