Anantara Chiang Mai – a Trip Back in Time

On his way to driving a tuk tuk around Northern Thailand, Mark Bibby Jackson popped in on the Anantara Chiang Mai, and discovered a hotel steeped in history 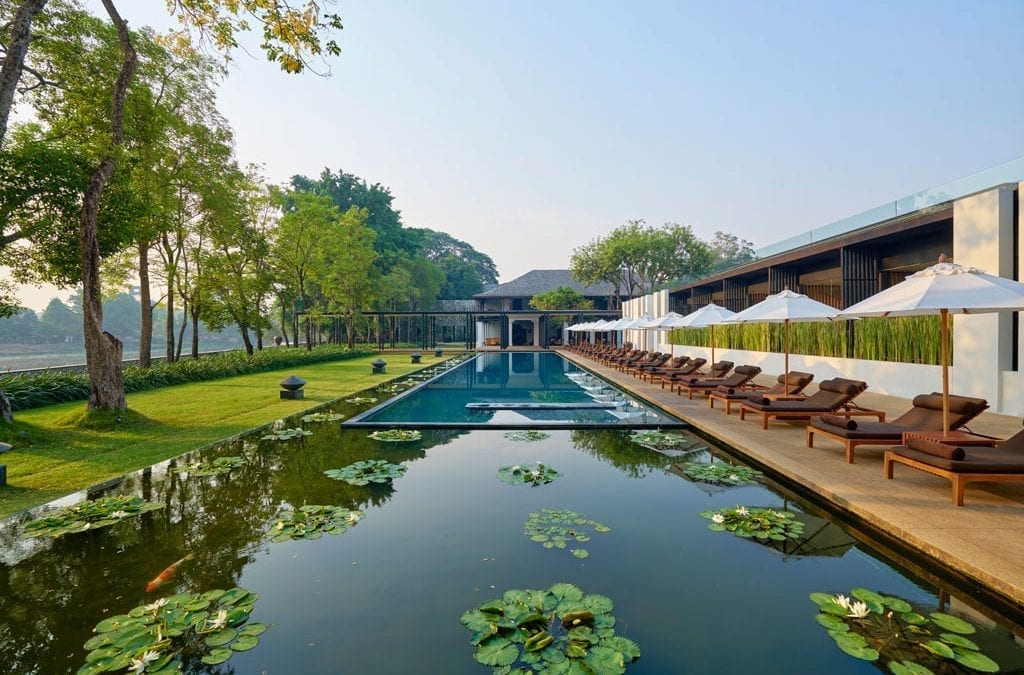 Anantara Chiang Mai – a Trip Back in Time

On his way to driving a tuk tuk around Northern Thailand, Mark Bibby Jackson popped in on the Anantara Chiang Mai, and discovered a hotel steeped in history.

When London merchant Ralph Fitch first visited Chiang Mai in 1586, it took him 25 days to travel overland from Burma to the city then called Jamahey. He describes the city as “a very faire and great towne, with faire houses of stone, well peopled, the streets are very large,” recounts traveller and writer Richard Hakluyt.

Now the city is a short flight from Bangkok and has become a must for serious travellers to Thailand. Many of them, visit the old British consulate, which came to represent the centre for colonial activity in the north of Thailand long after merchant’s first steps into the walled town, and is now the Anantara Chiang Mai resort.

For building was actually the second British consulate though little is known of the first building. Built by the consul W A R Wood in 1915 on a plot of land owned by the British government, where a statue to Queen Victoria had stood since 1903, it served as residence for the official, his servants and four of King George V’s polo elephants.

It proved the focal point for expat society, with the King’s or Queen’s birthday party being the main event of the social calendar, until 1978 when it was sold off by the British Government.

While the ground floor was built on a one-metre high rectangular base to protect it from flooding, upstairs spacious verandahs caught the breezes drifting in from the river. In the absence of air-conditioning, the dining room was cooled by a punkah – a wooden board suspended from the ceiling – pulled by a punkah-wallah.

One of the more remarkable elements of the building, as observed by Alberto Cosi in his article about the old consulate published in 1995 in Vimarn magazine, was that the building was precisely 22 yards long, the length of a cricket pitch, although it was croquet rather than cricket that was played on the consulate’s green lawn.

Despite the consulate housing George V’s polo elephants, the British king never visited Chiang Mai. It was his granddaughter Queen Elizabeth II who became the first reigning British monarch to come here as part of a six-day tour of the country in 1972, accompanied by Prince Phillip.

According to the Chronicle of Thailand, the couple underwent an itinerary that would not appear out of place on the brochures of the many tour companies operating in Chiang Mai now. They met “minority Meo, or Hmong, hill tribes who performed a cultural show,” before the “rumps of two baby elephants, each painted with the word ‘Bye’ were shown to the royals”.

However, John Shaw, who was honorary consul from 1990 to 1995, recalls that the trip did not go quite according to Whitehall’s best laid plans, with the royal automobile breaking down on the way back from the McKean Leprosarium, which was the first leprosy centre in Thailand.

The royal couple then stayed at the Bhubing Palace where Shaw states “the Queen was offended by the attention that her husband gave to the dancing girls – so rumour has it.” Little has changed there, clearly.

Shaw says the building was an important meeting place for expat society in Chiang Mai, even after the official sale had gone through. “I remember playing a last game of croquet on the lawn after it had been sold,” he says.

In 2005 the building was converted into the five-star Chedi Chiang Mai, before being taken over by the Anantara group more recently. The transformation has paid homage to the building’s colonial past, while affording guests the luxuries that you would expect from a luxury resort.

Certainly the integrity of the former consulate building has been maintained, although the dress code of those taking the spectacular breakfast beside the Mae Ping river is something that W A R Wood might have frowned upon.

Architect firm Kerry Hill, who oversaw the initial hotel projects that has largely remained untouched by the Anantara take-over, states that “the design intention of the scheme was to combine a city location with the atmosphere of a resort hotel, together with the integration of the existing colonial house, site and hotel using a contemporary interpretation of traditional Thai materials.”

The strong use of dark woods throughout, together with the space created by the L-shaped courtyard facing the river has by-and-large achieved the architect’s aim. Although for those wishing to seep in the atmosphere of one of the most history-laden buildings in northern Thailand, taking High Tea in the shade of the veranda is an experience not to be missed.

Unfortunately the polo elephants have long since gone, and as for a game of croquet you’ll probably have to borrow a set from John Shaw, but those fortunate enough to be staying at the Anantara Chiang Mai resort would not be complaining too much.