An exuberant city full of spectacular baroque architecture, as Mark Bibby Jackson discovers there are many things to do in Stockholm, especially in its old town, Gamla Stan, and its wonderful archipelago. 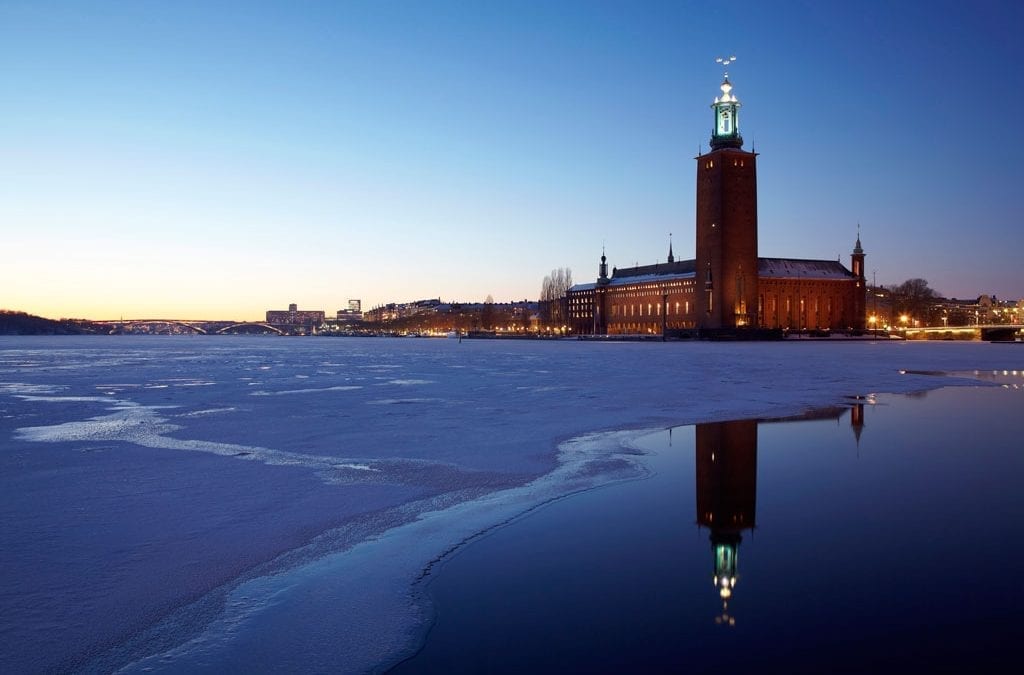 An exuberant city full of spectacular baroque architecture, as Mark Bibby Jackson discovers there are many things to do in Stockholm, especially in its old town, Gamla Stan, and its wonderful archipelago.

“Swedes must be crazy,” I hear myself thinking, as I swim in the 35C waters, a howling gale blowing freezing gusts of wind all around me. A peaceful oasis from the wintry cold for the last few days, the ninth floor of the Downtown Camper has turned into a wind trap far too strong for the slight white slippers provided by the staff of the Nest Spa, which now seem destined to descend upon Stockholm’s metropolitans like a pair of enormous snow flakes. Leaving the pool, I scramble towards the warm sanctuary of the sauna while my heart beats far quicker than can possibly be healthy. Then I look around and realise I am alone – maybe it’s not the Swedes that are crazy after all.

It is my second visit to the Scandinavian capital. The first was while travelling by train around the land of the midnight sun in the middle of June. Then I had been amazed by the endless summer days, now in January I am equally affected by the relentless winter greyness. Four days into my trip and I have yet to see the sun or a hint of blue in the sky. I had feared the nights, but these I can cope with – after all black is its natural hue, but the day is quite different. It’s as if the sun has not quite made up its mind whether to come out to play. Certainly, he is yet to don his hat.

Things to do in Stockholm – Stockholm Archipelago

A couple of days earlier I had taken the ferry through the Stockholm Archipelago. This had been a highlight on my previous trip. Despite the frenzied activity of all the city’s residents heading for their summer houses on the islands, I had loved standing out on deck and watching the sun glimmering on the waters. This time my venture outdoors is short-lived as I shelter like the rest of our passengers in the warmth of the cabin.

As maiden voyages go, it makes the Titanic appear a success story

As our guide explains how the locals have shut down their temporary homes for the winter, draining the water so the pipes won’t frieze, the difference between summer and winter in this part of the world is as clear as day and night. No boats bob in and out of the small jetties and no swimmer braves the icy waters.

Despite there being more than 30,000 islands in the archipelago, we are not destined to visit a solitary one. The ‘scheduled’ stop at the town of Vaxholm is cancelled as nobody wishes to disembark, and there aren’t any passengers waiting on the dock. Instead we return to Stockholm, like uninvited interlopers at the birthday party that is getting into full swing down below. Venturing to the front of the deck as the capital’s lights come into view, I meet one of the invited guests as he escapes for a cigarette. He informs me that his family traditionally celebrate special occasions on boats like ours, and today is his father-in-law’s sixtieth birthday. As I tighten the thick scarf around my neck, he, dressed in his shirtsleeves, says how warm the winter has been – it is only just below 0C – and that the water level is constantly falling due to the lack of rain. Clearly Stockholm, like Trump, has yet to discover climate change.

Our three-hour voyage passes without mishap, which is more than you can say for Stockholm’s most famous ship, the Vasa.

On August 10, 1628, the vessel sailed out from the city’s harbour to sail the seas, only to make it less than a mile before capsizing at a depth of 32 metres – still within sight of the shipyard where it was built. As maiden voyages go, it makes the Titanic appear a success story.

Commissioned by King Gusav II Adolf, the Vasa should never have set sail in the first place. The king ordered an extra deck full of canons to be built above the water line. Its safety check – which consisted of a few dozen sailors running up and down the deck to replicate the waves – was aborted from fear that the ship might sink. Quite how anyone thought it would fare around the Cape is anyone’s guess. Sadly, nobody was brave enough to inform the king that his new toy was unseaworthy. At least 15 people perished in the Stockholm harbour that day. The top ship simply toppled over after a slight gust of wind.

The Vasa rested on the seabed for more than 300 years before it was salvaged in 1962 – as it was setting of on its maiden voyage there was no booty of New World gold to tempt adventurous divers. Now it stands in a dedicated museum.

Over 90 percent of the timber is original. And as more than 1,000 oak trees were felled for its construction, this gives you an idea of the scale of the Vasa. But it’s not just its vastness that awes. The ornate design of the carvings with wooden figureheads designed to ward off courageous pirates and evil spirits is equally impressive, unfortunately they proved quite useless against proud kings.

The highly impressive Vasa Museum is one of many cultural attractions included in a Stockholm Pass, as well as the Archipelago Cruise, that can be bought from the tourism centre. The great thing about such passes is that when you encounter a museum that doesn’t exactly rock your boat, you can always pop into another one. The previous day having been left totally underwhelmed by the Nordic Museum, I ventured to Gamla Stan, or the Old Town, where I breezed through the Royal Palace before ending up at the Nobel Museum.

An hour later I emerged delighted by the display on literature and stocked up with such a dense understanding of the prizes that I suspect I could take it as my specialist knowledge category in Mastermind.

Despite all the attractions and the spectacular beauty of Gamla Stan, Stockholm is not just about culture. Or at least not of an ancient variety.

Read about Mark’s stay at Downtown Camper: Mindset Over Age.

On my previous visit, I had walked across the bridge from Gamla Stan to the south side of the city. This is the trendy part of town around Folkungagatan street, where Bohemians come to meet and discuss the latest Nordic Noir while twiddling with their bushy beards. Actually, you are much more likely to discover a Nordic beard in Hoxton than Stockholm, and I’m led to believe that Midsommer Murders is more popular than The Killing. Still, the area is a hub in the summer months, and while not exactly buzzing on a cold Monday night in January, in the Snotty Sound Bar – excuse the name – on Skanegaten, it has the ideal place to while away some time listening to great music from the 80s – and more modern East Coast bands I had never heard of – and beat the cold.

There I find myself reflecting on my final night how different Stockholm in winter feels from its summer twin sister. Having spent many years in Asia when the only seasonal variation is whether you get wet from the outside or from the inside, as the rainy season takes over from the humidity of the ‘dry’ season, I find myself appreciating seasons more and more these days. Perhaps, I’ll time my next visit to the land of Benny and Bjorn for spring or autumn, then I might not find myself alone in braving the Downtown Camper’s pool.

Stockholm has cold winters with long nights and warm summers with beautiful long days. Between December and March the average minimum temperature is between -2C and -4C, while in the summer months of June to August the average maximum temperature is between 20C and 23C. June has the most amount of sunshine and February the least rain. June to August is the best time to visit Stockholm weather-wise.

If you wish to book a hotel in Stockholm, please do so here. Travel Begins at 40 earns a small commission n each booking which helps to run this site, without affecting the price you pay for your room.

Arlanda is the nearest airport to Stockholm, approximately 23 miles north of the Swedish capital. However, Budget airline Ryanair has flights from London Stansted to both Skavsta (NYO) Airport and Västerås (VST) Airport. The former is 100 km to the south of the city and the latter 100 km to the west. A good bus service links both airports with Stockholm central bus station, Cityterminalen, with buses scheduled to coincide with departures.

The Krona is the currency in Sweden. It’s approximately 11 krona to the GB Pound, 10 to the Euro and 9 to the US Dollar.

For more information on things to do in Stockholm

Click here and to buy a travel pass, here.

Things to do in Stockholm Photo Gallery

Jaco: Costa Rica in the Raw