Albania Travel Off the Rails

On her month-long Albania travel Odyssey, Emma Levine decides to ignore all local advice and take the train.

Albania Travel Off the Rails

On her month-long Albania travel Odyssey, Emma Levine decides to ignore all local advice and take the train.

Shkodra station was empty and scarcely lit, save for a lone light bulb dangling in the tiny ticket office. The chirpy clerk was glad of my arrival at 5.15am – I was her first customer of the day.

“Nje bilete Durres, ju lutem,” I asked her – one ticket to Durres. She smiled and answered in Albanian – which of course I barely understood. After turning a few dials of the manual printer, she punched a hole to validate, and handed a grey paper ticket over in exchange for 160 lek (about $1.40). I was heading 100km south to the coastal city of Durres – a slow, sleepy journey of around four hours.

Rail travel, as my preferred means of transport around the world, had on this occasion handed me an interesting challenge

The deserted platform was pitch black. The torch on my phone cast a weak light onto the train’s exterior, shrouded in colourful, angry graffiti. I hoisted my heavy rucksack into a black, empty carriage. Rail travel, as my preferred means of transport around the world, had on this occasion handed me an interesting challenge.

Not that it should have surprised me; since arriving in Albania for a month-long solo trip, I found the very existence of trains to be shrouded in uncertainty and rumour. My friend, musician Ossi, was blunt. “Why the hell do you want to travel by train here? I’m sure they don’t exist any more. Anyway the locals stole all the tracks after the fall of Communism.”

Eros, my Airbnb host in Tirana, was equally puzzled. “All trains have been cancelled this month because they’ve run out of oil,” he said.

I was unable to check at Tirana’s train station because it had been knocked down in 2013 to build a shopping mall. That wasn’t surprising; Albania’s capital embraces commerce with enthusiasm, where private enterprise is seen as the saving grace in a nation with high unemployment.

To confirm whether rail travel would be possible, rather than taking the predictable furgon (minibus) I headed to the tourist office. It was tucked away behind the landmark National History Museum, famed for its modernist mural depicting national heroes.

Inside, the office was deserted. The country has a fledgling tourism industry, despite the snowy Albanian Alps in the north, Roman remains and beaches in the south, and Ottoman architecture and castles in the centre. That said, some of Tirana’s Communist-era relics recently opened up to the public with all the hallmarks of becoming cultural icons, including Bunk’Art – a labyrinthine bunker built for the nation’s rulers, now a museum, and House of Leaves filled with original surveillance equipment.

“Why do you want to take the train? I never take them. You are very…” – she paused to think of the best word – “…adventurous”

The young woman inside was yet another local to raise her eyebrows. “Why do you want to take the train? I never take them. You are very…” – she paused to think of the best word – “…adventurous”.

“I like a challenge,” I explained, as she tapped away at her computer to try and unearth a railway timetable. After several minutes she flipped her screen around to display one. “It’s probably not even up to date,” she said pessimistically, although even that couldn’t dampen my enthusiasm.

Despite Albania’s prevalence of road transport, it was my intrepid streak that drew me to the rails. I have fond memories of years of traversing India by a three-tier sleeper coach, or climbing off a train bleary eyed at 2am to get my passport stamped at Turkey’s international borders.

The timetable indicated just five routes running on the entire national rail system, including one a day from Shkodra to Durres, and Kashar (on the rural outskirts of Tirana) to Elbasan.

Three weeks into my Albania travel adventure, my plan was to depart Shkodra – a northwestern city ruled by the Venetians in the 15th century and still with an Italian vibe – by the 5.45am train. By that time I’d still to meet anyone who had travelled by train in Albania.

I considered it a miracle when my journey departed on time in the pre-dawn darkness, accompanied by a hoarse, out-of-tune hooting of the horn, like a beginner’s trumpet practice. Off we rolled, clattering through the chilly mist as the sun slunk into view.

For the first time I could see my surroundings. The neat two-by-two rows of cushioned seats, mostly lying vacant, were in better condition than the carriage windows: each pane was cracked, shattered with spiders-web-like cracks radiating from the centre. Some gaped open with missing panes.

There were no stations to speak off, just occasional stops with little to mark them, other than a sign on a platform

We passed through farmland; fields dotted with sheep or filled with dark yellow corn, trees heavy with ripe pomegranates and figs, and an occasional stone cottage. Every now and then, a famer leading some goats or a couple of schoolchildren taking an unpaved track to school turned to gaze at the once-a-day hooting train.

There were no stations to speak off, just occasional stops with little to mark them, other than a sign on a platform. A few people boarded at each stop, but the train remained relatively empty and peaceful.

I grabbed my camera, and wandered up and down the near-empty carriages, fascinated by the shattered windows. A dishevelled man stood up to disembark, and pointed to the windows. “Enver Hoxha! Enver Hoxha!” he shouted angrily at me, implying that the vandalism was the fault of the late communist leader.

And in a roundabout way, even though Hoxha died more than 30 years ago, you could argue that he was. Albania’s national railway network was seen as a cause célèbre during the totalitarian regime that lasted from 1944 until 1991. Hoxha effectively prohibited the private ownership of cars, so trains really were the only method of transport available to everyone. In the railway’s heyday, especially during the 1980s, it offered a comprehensive network on domestic routes, and some international ones.

As soon as communism fell, Albanians equated car ownership with freedom. Even today, the vast majority of journeys are by car or bus. Most of the inter-city and cross-border transport on my trip was by furgon.

For more Soviet-Communism nostalgia, join Johan Smits in Back in the USSR: Bishek, Kyrgyzstan.

And it was true that many of the tracks really had been stolen. I asked a senior police officer, who had worked in the Communist government, why the railways hadn’t been revived and repaired – especially as Albania had such aspirations of joining the EU.

“Politicians always promise to upgrade the railways. But that is an insincere promise and only a way to get votes,” he told me.

He also explained a more serious obstacle, that Albanian organised crime gangs control the petrol trade, so it’s in their interest to ensure that road transport is prosperous. These gangsters, he alleges, are in league with corrupt politicians – so a new railway system benefits no one in power.

It was 10am when our train approached the ancient city of Durres and I prepared to disembark, eager to see its Roman amphitheatre and Albania’s largest archaeological museum. The train attendant walked down each carriage tying the blue curtains into a bow and placing them in the centre of each window, possibly to detract us from the cracked glass.

When I stepped out of the railway station I was welcomed by rows of furgons with drivers calling out their destinations. It would have been an easier way to travel – but where’s the fun in that? 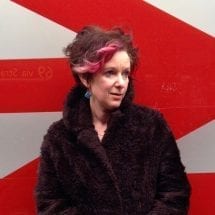 Author, broadcaster and photographer, Emma lived and travelled throughout Asia for many years and specialised in Asian sporting culture, writing travelogues and presenting a TV documentary series on National Geographic Channel. Now based in London, she's a writer and editor while home, with jaunts to satisfy cravings for solo, independent travel to off-the-beaten-track European destinations. She follows her beloved Bradford City FC where possible.