On a long weekend in the Belgian capital, Mark Bibby Jackson discovers many things to do in Brussels, although most seem to revolve around the city's delightful bars.

Travel Articles > Travel Destinations > From Beer to Mussels: Things to Do in Brussels 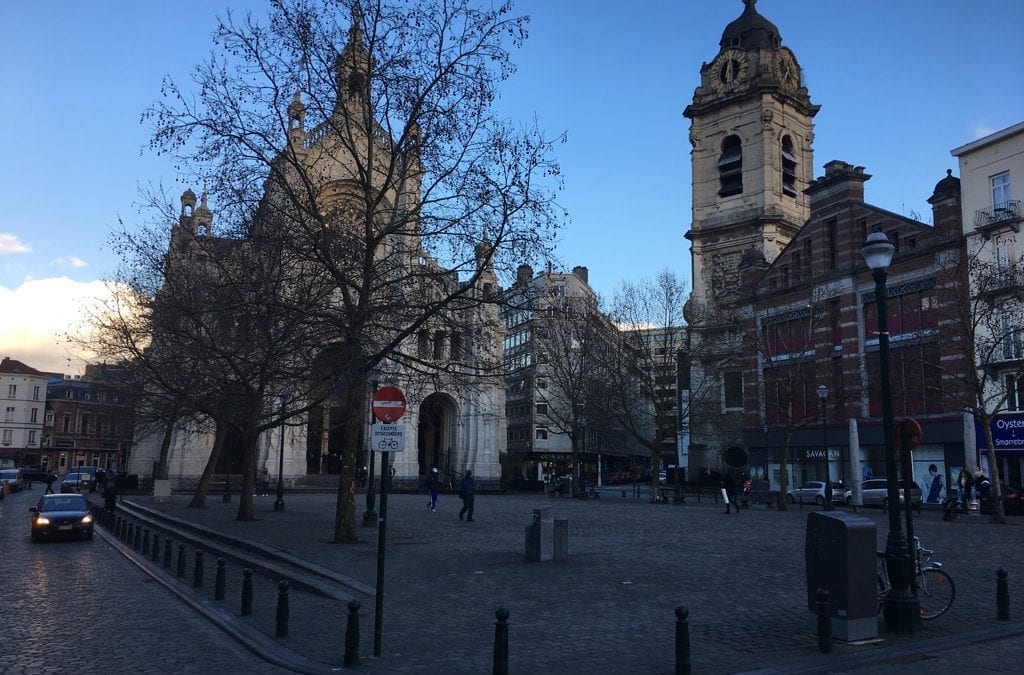 On a long weekend in the Belgian capital, Mark Bibby Jackson discovers many things to do in Brussels, although most seem to revolve around the city’s delightful bars.

I fell in love with Brussels while inter-railing across Europe, what seems an eternity ago now. Then, sleep-deprived, I had staggered off a train following an overnight trip from some other part of the continent – venues never seemed to matter only the avoidance of paying hotel bills – to discover the most majestic Grote Markt (Grand Place), as its traders were setting up for the day. I sat on the cobbled stones in one corner and saw Brussels slowly come to life. Eventually, I treated myself to a coffee.

Fast forward twenty-plus years and my arrival this time is less welcoming. Taking the evening Eurostar, I decide to walk from Brussels Midi station to the centre, thus landing myself in typical station environs – hostile and unfriendly. Lifting my iPad up to the gaslight, to take direction from the map I discover myself as the focus of attention. “Do you have a light?”, “Where are you from?” Strangely, I find my interlocutor’s leg wrapped around my leg, as if he wants me to join him in some traditional folk dance. Soon his hand reaches towards my pocket where my wallet lies. Politely, I reject his overture for I am no dancer.

Fortunate to have encountered the only mugger less competent at his profession – I trust his strike was opportunistic rather than part of a structured career path – than I am at dancing, I hide my iPad away and stride off confidently towards the centre, consequently ending up involuntarily pursuing my would-be mugger, albeit at a safe distance, until he retires to a shop.

The Bars in Brussels

My intention is to spend sample several of the bars of Brussels, starting at Kafka Café, a familiar haunt from the time when I knew Brussels well, only to discover it closed, seemingly for ever. However, the worthy Le Coq, in the central St Catherine district, named after the church that dominates the square, just around the corner, proves a more than adequate replacement.

Belgians excel in beer – that and moustaches – sometimes the two are combined to excellent comic effect. Forget craft beer and its flash in the pan notoriety, Belgian beer is based on centuries of tradition. There’s a reason those Trappist brewers did not speak; it’s no vow of silence but the by-product of perfected experimentation.

For me, Brussels’s bars are the city’s museums. It’s not just the quality of the beer on display, but the way the bars have been preserved timelessly themselves. The wood-panelled interiors provide a warmth that invites a longer stay – an invitation I am loathed to decline.

A sense of bonhomie, sadly often absent elsewhere, consumes the bar. I strike up a conversation with a dancer and a sound engineer, the latter has just had his heart broken by the latest love of his life. His handle bar moustache bristles with disillusionment as he empties his heart to this stranger from Wales – I briefly mention the European Championship quarter-final – and he drowns his beer with tears. Fortunately, it’s only Maes.

It’s good to see that the spirit of Hercule Poirot lives on, although I suspect the great detective might have applied a little more wax and a little less lyricism.

Beer is presented as if part of a religious ritual. Each has its own glass – woe betide he who serves a Duvel in a Chimay glass – and the froth is carefully smoothed away by knife before the goblet is placed on the altar. Broken bread and sliced sausages substitute for the wafers. Somehow, unlike Central London on a busy Friday night, nobody runs out of the correct glass let alone glasses altogether – I rather suspect that serving beer in a plastic glass is a capital offence here. There is also a lack of stags or hens, maybe it’s not the season, or perhaps there is an understanding that this is a beer to be savoured rather than guzzled.

Narrowly avoiding the adjoining bars, we swerve our way around the corner to Le Pré Salé, where my second treat awaits.

The Mussels from Brussels

Nothing quite compares with mussels from Brussels, and this unassuming restaurant has a reputation for excelling in all things moules. For me, the gastronomic experience starts as the pot is delivered before you and then the lid is lifted, and you inhale the glorious vapeurs in anticipation of the delight that lies in store. It does not disappoint; a healthy portion of moules crowned with the freshest celery served in a marinière sauce. I conclude by pouring my chips into the pot to soak up the remaining liquor.

The rest of the day blurs into obscurity, as only the best of Sundays can

The proprietor presents the table next to ours with a candle as he plays some tacky Belgian pop music. At first, I think that it is how they celebrate a birthday here, only to discover the music box is a new acquisition as the act is repeated at the other table of regulars – after all this is a Saturday night and cause célèbre enough.

The following day, I awake slightly later than usual – nothing to do with the beer the night before, of course – and return to saintly Catherine, to join the procession of devotees queuing outside the stall at De Noordzee. Staff dish out bowls of fish soup from a large cauldron for a few euros. Breaking with habit, I wash this down with a glass of white wine – rather than beer – as this seems to be what is expected, although there is also the option of Champagne for those who prefer their stall-standing fish soup experience to be conducted premier classe. Like the meal the preceding evening, the quality is of the highest order.

If you find yourself in the Belgian capital in August, check out the Brussels Beer Festival “BXL Beer Fest” and if in December the iconic Brussels Christmas Market.


Earlier, we set off from our apartment in the up and coming St Giles district to stop off at the delightful Brasserie von Schueren for coffee. I get the sense of an Islington café some thirty years ago only transported to Montmartre. People sit and read, or meet their friends and chat. Trendy in an alternative artistic way – more designer than designer clothes – Hoxton before the Hipsters, as the riffs of Hendrix morph into Miles Davis.

From here, it is a short stroll to the flea market at Place du Jeu de Balle, where I narrowly resist the temptation to buy a fish-shaped container for nibbles that would have shamed even the most excessively kitsch dinner party. A jazz band plays in the corner of the square to a packed audience despite the winter cold, and I notice another punter walking off with the fish.

If you have enjoyed Mark’s account in the Belgian capital, why not read his: Gamla Stan, Boats and Beardless Bars, why not try a few days in Stockholm?

The rest of the day blurs into obscurity, as only the best of Sundays can.

Mindful of my remit to experience the culture of Brussels to the full, the following day I stride off with purpose across town from St Giles, where I pop into Brasserie von Schueren for a coffee, across town to the Botanical Gardens some five miles away. Along the way, I pass through the Grote Markt and up to the Museum Quarter where I marvel at the grandiose architecture. All are wonderful in their own way, but I feel like an interloper in a strange land. I’m tempted to pop in and say hi to Magritte, but isn’t Brussels a living museum and it’s main exhibit the beer.

Eventually, I discover myself back at St Catherine, where I stray into Monk bar, before returning to Le Coq to reacquaint myself with broken-hearted mustachioed sound engineers and lambic beer.

The journey back is swift and smooth. Having purchased Eurostar’s Standard Premier ticket, I am served a meal accompanied by a perfectly reasonable Syrah Pays d’Oc. I check my map once more – this time from the sanctuary of my carriage – to discover we have now passed into France, so I can drink my wine without feeling any sense of betrayal to the wonderful beer of Brussels.

To discover more about Belgium’s great beers, read Belgian Beer from the Man who Knows.

Typical of northern Europe, Brussels has a temperate climate with relatively mild temperatures throughout the year. May is a good time to visit, as this is both the driest month and sees the most hours of sunshine. Avoid July as this has the most rainfall, although along with June and August, it also sees the highest temperature. January, when temperatures can dip below freezing, sees the coldest days and nights. Sadly, on average Belgium gets more rainfall than the UK. For more detailed information, click here.

With so many to choose from where should we start? However, here are our three best bars in Brussels:

Le Coq – in the heart of St Catherine’s, sit at the bar and slowly work your way through the menu while discussing politics with your companions.

Monk – next to Le Coq, this is the perfect place to perform your Sunday rituals, while listening to impromptu music.

Brasserie von Schueren – forget the name, this is more bar than brasserie. A gem in St Giles, just imagine you are in Islington.

Time in the Belgian capital

The time throughout Belgium is one hour ahead of the UK, ie. GMT+1 (October to April) and GMT+2 (April to October).

Eurostar runs a direct service to Brussels Midi/Zuid from London St Pancras station. The journey time varies but normally takes just over two hours. A ticket entitles you to two-for-one entry into museums and galleries, unfortunately this does not also apply to the beer.

Things to do in Brussels Photo Gallery