On their trip through South Africa, Eileen Wise and Roger Hermiston pay a visit on a controversial figure in Cape Town at the Rhodes Memorial. 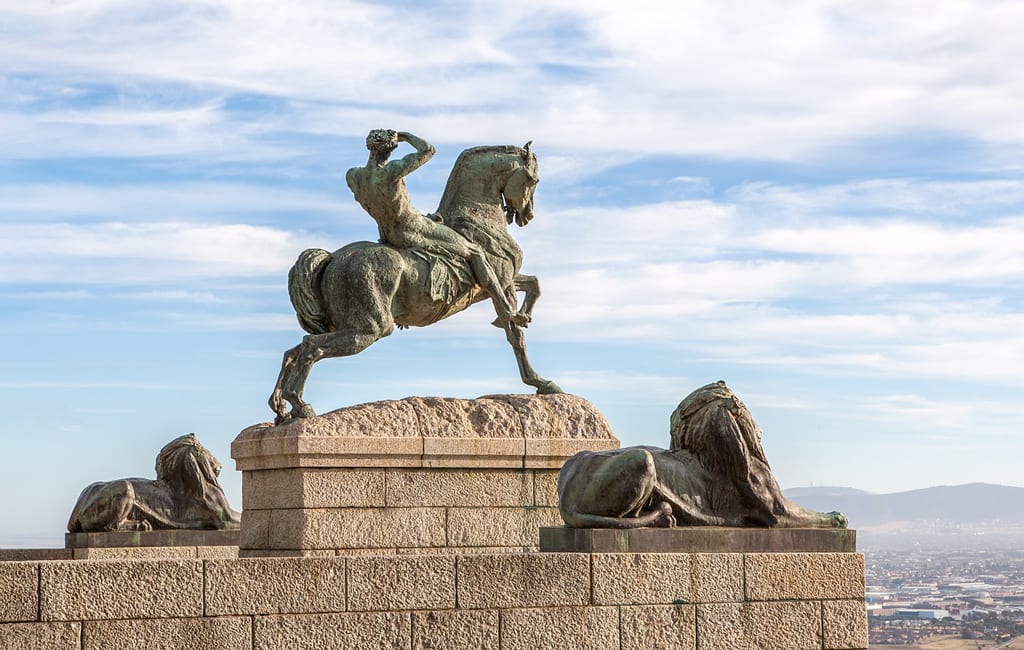 On their trip through South Africa, Eileen Wise and Roger Hermiston pay a visit on a controversial figure in Cape Town at the Rhodes Memorial.

Poor old Cecil John Rhodes. They’ve torn down his statue on the University of Cape Town campus, and now a working party at his alma mater of Oriel College, Oxford, has come up with the novel idea of erecting a copy of his statue there and inviting students to scrawl comments and obscenities on it.

And were the diamond magnate and African imperialist to be magically transported back to view his grandiose shrine underneath Devil’s Peak mountain in Cape Town, he would be perturbed to see that the nose of his bust has been cut off. Such are the indignities this symbol of oppression must continue to suffer as colonial history is re-evaluated and revised.

To read more of Roger and Eileen’s trip, read: South Africa Travel from Cape to Cape.

Apart from the damage to the nose, the Rhodes Memorial has escaped unscathed. On the day we visited, colourful wedding parties were posing at the bottom of its massive staircase with the Greek temple-inspired backdrop or lining up to be pictured the other way with the magnificent vista of the city and the Atlantic and Indian oceans beyond.

We walked up the steep forty-nine steps, past the splendid bronze stature of a horseman (Physical Energy) and the row of lions (four on either side) flanking either side of the staircase. Below the bust of Rhodes we read the 1902 poem Burial, written by his great friend Rudyard Kipling in his honour, which concludes ‘Living he was the land, and dead, His soul shall be her soul!

Then it was our turn to pose. We’d arrived with our guide Bradley on his elderly but very lively Chinese-made motorbike and sidecar, attracting much attention from the wedding groups. Our ill-fitting leather jackets, goggles and bandanas also seemed to add to the general amusement.

The memorial hosts a quaint tearoom, while picnickers lounge among groves of oaks and stone pines. Here, at least, Rhodes the man seems to slip quietly into the shadows while his monument and its beautiful surrounds continues to provide pleasure for one and all.