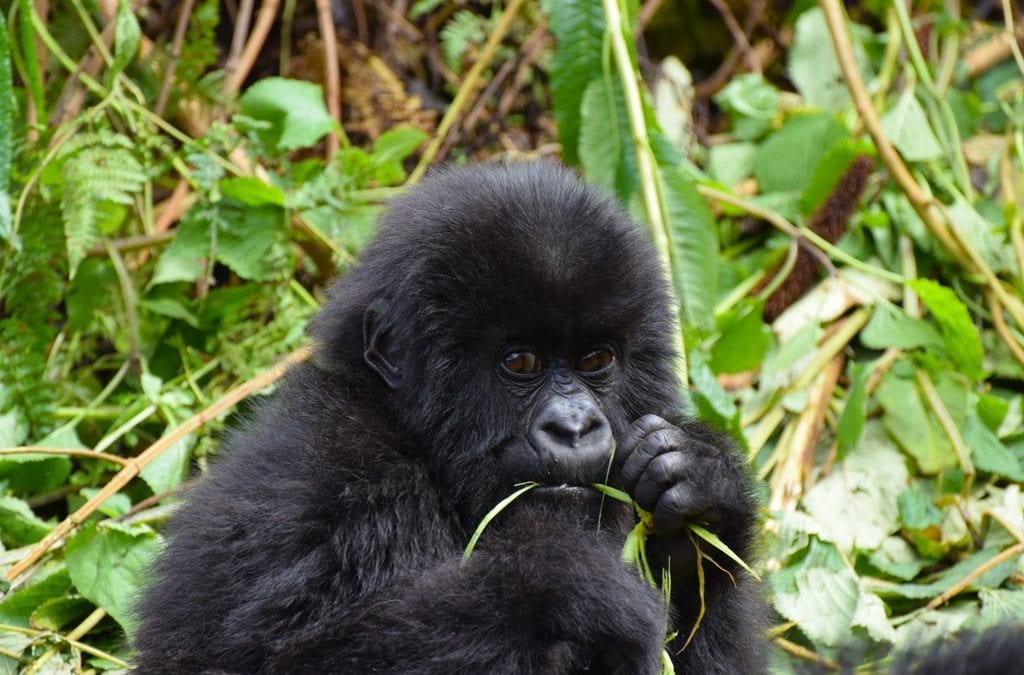 I was awake before the Ugandan dawn chorus, having struggled to sleep through the sheer excitement and anticipation of undertaking a childhood dream. I was about to set off in search of Uganda’s mountain gorilla.

Wearing my sturdy walking boots, thick socks, long trousers and a rain jacket for the predictable afternoon rains I headed out into the Africa jungle. First, we checked in at the gorilla trekking headquarters at the base of the mountains where we were allocated an experienced ranger along with two trackers to lead our group of eight. The ranger, who has spent over 20 years with the gorillas, strongly recommended we hired a local porter and a long walking stick. Fighting the alpha male voice within my head saying “you don’t need help” the gentler pragmatic voice won through and convinced me to accept.

My local porter, Robert, was a 21-year-old student at the local university who assisted with treks twice a month. He would prove an invaluable ally throughout my trek, pulling and pushing me up the jungle paths whilst taking some rather artistic and slightly unflattering photos of me along the way.

We started our trek in search of the mountain gorilla by walking through local tea plantations where the moist morning dew enveloped my trusty boots. We then proceeded into the steep mountain jungle and forests of Bwindi National Park, where 10 metres ahead, our rangers were cutting a clear path for us to tread. Earlier that morning a further two rangers had set of in search of our band of gorillas, starting where they had left them nesting the night before. Our advance party kept in constant contact with our lead ranger guiding us towards their location. The three-hour trek passed through some beautiful scenery and some quite challenging terrain.

Like raindrops dropping from the canopy above, gorillas of all shapes and sizes started sliding down tree trunks to the jungle floor

All of a sudden our lead ranger stopped in his tracks saying, “we’ve located them”. We were given 10 minutes to sort our camera equipment out and compose ourselves, before we started our approach.

A hushed silence descended among our group as we tried to float across the jungle floor not to disturb our hosts. Then we spotted a young female descending a nearby tree in a less than graceful fashion. We stood in amazement. Then, like raindrops dropping from the canopy above, gorillas of all shapes and sizes started sliding down tree trunks to the jungle floor; the youngers making a real game of it. The family then meandered to an opening on the ground where they settled for their brunch.

Moving to a more favourable position we watched these magnificent creatures interact and play from five metres.

A brother and sister mountain gorilla, around 18 months old, rolled down a hill through some leaves, eventually landing on my feet, where they started playing with my boot laces. Before I knew what was happening, the mother’s protective instincts kicked in and she strode down the hill, placed one hand on my right shoulder and scooped up her two babies with the other. My heart stopped, but I didn’t feel threatened. It felt like a mother saying “we’ve all had enough fun now” to her babies.

Soon, the quickest hour of my life came to an end and we started our return trip. The descent was much quicker, as we were no long tracking gorillas but anticipating our lunch. In total the trek took around 5 ½ hours.

Something stirred inside during my time with the gorillas that has had a profound impact on me. Standing so close to a wild creature with which we share over 98% of our DNA, the countless similarities become apparent. It felt like I had connected with a distant relative. It’s a journey which will live with me forever and one that I will never forget. 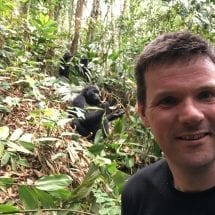 Phil Ellis has 14 years’ experience in the travel industry and is currently Titan’s Long Haul Product Manager. He is enthusiastic about discovering new and interesting places. Phil has a love for wildlife and often finds himself being drawn back to Africa, but has specialist knowledge of the Far East and has recently expanded his product portfolio to Northern Europe and the Baltic region.