What Was Your Favourite African Safari?

In the second of his series of QAs, Travel Begins at 40 Founder, Mark Bibby Jackson, relates his favourite - or at least - most memorable African safari experience.

Travel Articles > Experiences > Outdoors > What Was Your Favourite African Safari? 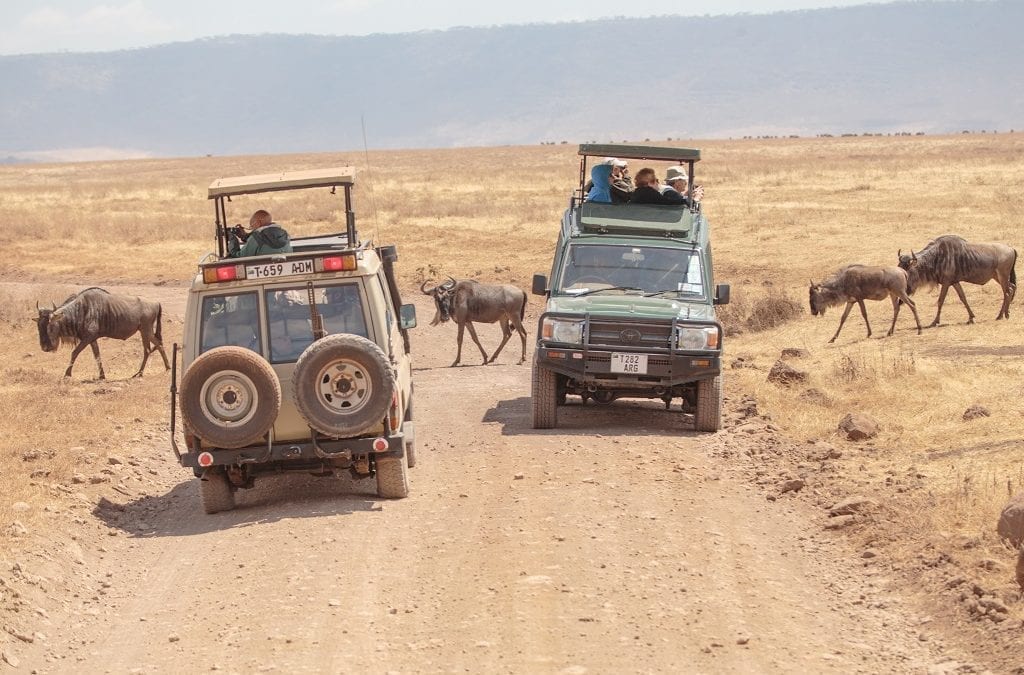 What Was Your Favourite African Safari?

In the second of his series of QAs, Travel Begins at 40 Founder, Mark Bibby Jackson, relates his favourite – or at least most memorable – African safari experience.

My most memorable African safari was most definitely in Tanzania. I had just spent a couple of weeks in Zanzibar with three friends, which was a great experience despite the noise of the rats crawling above our heads in the rafters in one hostel, and encountering a man delirious from malaria in another. We flew to the capital Dar es Salam in a plane where people were sitting in the isle throughout the flight – it was only 12 minutes or so.

Young, foolish and clueless, we were determined to go on an African safari without realising that Arusha rather than Dar es Salaam was the safari capital of the country. I persuaded my co-travellers – I take full responsibility for the consequence actions – all we had to do was engage with some of the locals and something would turn up. And so it did.

Chatting to a man in a bar – how many stories start this way – he said he could take us on a safari in a mini-bus on a private tour. For some reason the journey involved going to a township on the outskirts of the city to see some vehicles and narrowly missing a bus that was leading to another part of the country, but the whys and wherefores for these actions escape me now. Apart from the cost of hiring the mini-bus, our food and accommodation, all we had to do was pay our guide whatever we felt fit at the end of the trip.

The following day, we found ourselves heading off along a road seemingly leading to nowhere. By the end of the day we were in Mikumi National Park watching lions, or perhaps they were watching us.

Our African safari experience did not pass without adventure. The mini bus had bald tyres so we were constantly stopping to pay the local police ‘tips’ to carry on our way, and once we did break down in lion country where our driver had to change the tyre. Fortunately, the carnivorous beasts seemed most soporific in the afternoon sun, and showed not the slightest interest in us.

However, the greatest problem lay in our guide demonstrating as little knowledge of Mikumi as did we. He was from Dar es Salaam as was the driver and mini-bus, and none had strayed this far from the capital. This became most apparent when we saw a sign for a hippo pool. Now, one of my friends, Ruth, absolutely adored hippos, but had never seen one in the wild. For her, the main purpose of the safari was to see the glorious animals wallowing in mud. I think she was even wearing a t-shirt with hippos on it throughout. So, naturally we followed the sign to the pool, but when we arrived there as the sun was setting on our first day, there was no sign of any hippo.

To read more about African safaris and how they can help to conserve the wildlife, read Luke Bailes: African Wildlife Conservation.

The following day we went off successfully in search of lions, zebra and elephants – breaking down en route – before once more returning to the pool to cast our eyes on the hippos, again to be disappointed. The rest of us had given up all hope, but Ruth was not one to be deterred.

On our last day as we were returning to Dar es Salaam, and the limitations of our guide had by now become all too apparent, Ruth suggested that perhaps the sign was pointing down a different path to the one we had followed the previous two days. We agreed to give it a go. Sure enough, a few hundred metres further along we encountered a pool with more hippos than you would find kids in a lido on the first sweltering weekend of an illusory English summer.

I really would not recommend adopting such a laissez faire approach towards arranging an African safari as we did; booking your trip in advance is recommended especially considering how many reputable companies there are specialising in this area nowadays, some of whom might even have guides that have been to the safari park previously. But as a travelling experience our Tanzanian safari adventure ranks right up there, and is the African safari that will forever be entrenched in my memory.

Ruth content with her hippo fix, we returned to Dar es Salaam, only stopping occasionally en route to support the Tanzanian Police Benevolent Fund. In the end, we gave our guide a generous tip, after all he might have been clueless on safaris, but he did provide us an invaluable insight into Tanzanian culture.

Cover photo supplied by Intrepid Travel, for more information on how you can book your African safari with Intrepid, click here.

Is Cambodia the Next Wellness Destination?