Things to Do in Leipzig: From Bach to the Spinnerei

From becoming immersed in the local music scene to getting blind drunk at 11 in the morning, Mark Bibby Jackson discovers plenty of things to do in Leipzig for a long weekend.

Travel Articles > Travel Destinations > Europe > Things to Do in Leipzig: From Bach to the Spinnerei 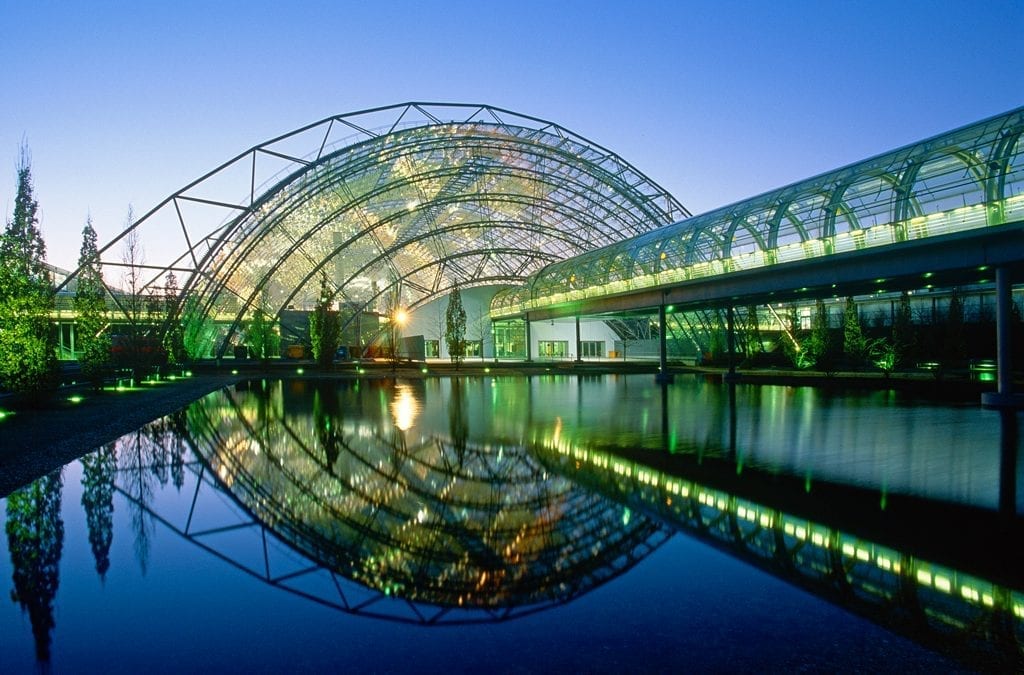 Things to Do in Leipzig: From Bach to the Spinnerei

From becoming immersed in the local music scene to getting blind drunk at 11 in the morning, Mark Bibby Jackson discovers plenty of things to do in Leipzig for a long weekend.

I walk up to the bar at Tonelli’s and ask the heavily tattooed barmaid what time the music starts. “About now,” she says, glancing at her watch. It’s already 9.30pm, a full half-hour after the advertised start time. This is Germany after all, aren’t things supposed to start on-time here? “It’s €3 for the music,” she adds, almost apologetically. I hand across the money and start supping my dunkel beer.

About ten minutes later the band, who have been sitting close to the door throughout, rise to the small stage, their joint embers dissolving in the ashtray. A hush descends, as if we are in one of Leipzig’s many churches rather than a smoke-befuddled jazz joint, and the saxophonist introduces his fellow musicians. Surrounded by young people, perhaps students from the nearby Leipzig University, I recall the wet, Sunday afternoons of my youth spent down London’s Merlin’s Cave. All, apart from one man just along the bar; he looks like Bruce Willis on a bad night. I pray he doesn’t break into Under the Boardwalk. There is no need to fear. The band starts playing, it’s ’Round Midnight, well not quite yet at any rate.

Leipzig has music seeping out of its every pore; even the ring road – das ring – has operatic overtures. Wagner was born and both Bach and Mendelssohn died here, as my informative guide Monika had explained earlier. Our tour started in the central square, Augustusplatz. At one end is the concert hall where the Gewandhaus orchestra plays, 275 years after their founding, at the other the Eastern era opera house. To the side is the university, a modern creation built on the site of the original building. Here Goethe occasionally turned up for lectures in law, when he was not chasing the fräuleins of Leipzig. His lack of attendance at the university – he dropped out – is celebrated with a statue alongside fellow men, Lessing and Leibnich, though there is no place for the current Chancellor Merkel, who actually graduated in biology.

We pass by the Mädler-Passage, inside which is the Auerbachs Keller, which dates back to 1525 and is celebrated in a scene from Faust. There you can rub the well-polished shoe of the man who sold his soul to the devil standing next to him, apparently for luck.

Leipzig is dominated by passages such as this, initially used for trading, they now shelter shoppers from the rain. Situated at the intersection of two major trading routes and founded in 1165, the city has a long history of commerce. From here we pass through the 14th Century market square, which still has a farmers’ market each Tuesday and Friday, and on to St Thomas Church.

The church dates back to 1212. Martin Luther preached here in 1539, and Johann Sebastian Bach was choirmaster from 1723 until his death in 1750. The master of Baroque music is also buried in the church, although this did not happen until well after his death. For, like so many artists and musicians, his talents went unappreciated during his lifetime, and he died a pauper. His body was buried in an unmarked grave in Old St. John’s Cemetery elsewhere in the city before being unearthed in 1894, although it is highly doubtful that the bones lying in sanctified ground are actually Bach’s. Frequent concerts are performed at St Thomas’, which has its own boys’ choir. Across the road is the Bach Museum, which has guided tours and workshops. There is also an annual Bachfest Leipzig, held in June.

The church is just one of 23 locations situated on the 5km music trail, the Leipziger Notenspur, which winds its way through the city, opening up 800 years of music to the casual visitor. The sites are indicated by curved steel inserts resembling musical notes in the ground, where you can listen to music as well as information in both German and English about the venue.

Leipzig is not just a city of music. It is a city of change. In the 1980s, it was also a centre of the protests against the East German leadership. From 1982, people would congregate at St Nicholas Church – which is also part of the Leipziger Notenspur and has frequent concerts – for peace prayers. Gradually these turned into Monday demonstrations and the peace movement started.

On 9 October 1989, some 70,000 people congregated in the square a candle in their hands and sat down. Despite threats of violent reprisals, the protest concluded peacefully, and exactly a month later the Berlin Wall came tumbling down in the Peaceful Revolution that led to the reunification of the country. The event is commemorated in the Festival of Lights, celebrated each year in October.

As I stroll around Leipzig’s parks and surrounding streets later in the day, I feel like I am back in London. However, there you sense there is a constant battle between bike and car in which the pedestrian becomes collateral damage – in Amsterdam the war is over and the bike has won; woe betide he who ventures unwittingly into a bike lane. In Leipzig, I feel there is a harmony between the bike and the pedestrian. Each has its own place; and when you do happen to stray off the straight and narrow into the bike lane, a gentle ring of a bell rather than “Oi you!” suggests politely that you might be so kind as to move across, bitte schön. In Leipzig, their bitte is worse than their Bach.

Things to do in Leipzig: The Arts

The following morning, I decide to flip from music to art. First up, is the Museum of Fine Arts, just off the market square. The top floor has a display of contemporary art with a clear emphasis on female artists and sexuality. Perhaps this is the cultural equivalent of the top shelf of magazines in newsagents? Below are floors devoted to European art from the 17th to 19th centuries, as well as to the New Leipzig School of painting, which achieved prominence in the art world in the 1990s with works by Neo Rauch and Tilo Baumgärtel.

If you enjoyed Mark’s Things to do in Leipzig, then read his journey to neighbouring Dresden: Castles, Steam Trains and a Mickey Mouse Republic.

Both artists are part of the artistic community at the Spinnerei, my next destination, Rauch still has a studio here. Originally a cotton mill, the largest in mainland Europe, at its peak 2,000 people lived and worked at the Spinnerei in a community with its own kindergarten and allotment, producing cotton that was transported across the country via canals.

In 1992, the huge warehouses were converted into art spaces and studios – there are now more than 100. Recently the community has diversified and there’s even a call centre based here, as well as a hair salon, but the emphasis is most definitely on the creative with 14 galleries, including the non-profit space Halle 14. The “cosmos of art” has three main exhibitions each year in spring, autumn and winter, as well as an outdoor cinema from May to September, when the place becomes abuzz with Leipzigers watching films, partying and spilling out onto the nearby Karl-Heine-Strass, which is one of the more popular night spots in town.

Giving up the Gose

My last morning, I visit the Gose Brewery in the beautiful Bayern Station (Bayerischer Bahnhoff) for a tour and tasting – apparently morning drinking is acceptable in Leipzig. Although the brewery only opened in 2000, gose is one of the oldest styles of beer in Germany. Named after a small river of that name, it has a sourer taste than your traditional pilsner. In 1738, the story goes that Prince Leopold I was so disappointed with the brews of Leipzig, that he allowed a local innkeeper to introduce gose beer from Glauditz. Soon gose became the main beer of the city, with Goethe a particular fan. Accounts that the beer, a supposed aphrodisiac, has been helping Leipzigers have sex since 1738, are unsubstantiated.

By the 1960s, the beer had lost its pulling power, and went into remission for more than 20 years before the current revival. Gose is not brewed in accordance with Germany’s Reinheitsgebot beer purity law as both coriander and a bit of salt is added to it, explains the brewmaster, Matthaus as he settles me down for a blind tasting. However, I soon give up on the gose, I still prefer dunkel to gose, and drinking in smoke-filled jazz bars around midnight than railway stations at 11 in the morning. Some things will never change.

Things to do in Leipzig – Off-the-beaten-track

The weather in Leipzig is typical of northern mainland Europe, with cold winters and warm summers. In the winter months, the temperature often falls below 0C, but in the summer it can break 30C. July is the coldest month, August the hottest, and January to February the coldest. For the current weather in Leipzig, click here.

Ryanair has direct flights from London Stansted to Leipzig three times per week. Alternatively, you can fly to Berlin and take the train from there (see below).

To book a hotel in Leipzig, click here. Travel Begins at 40 takes a small commission from all bookings made this way, but this does not affect the price you pay.

Direct trains run from Berlin Central Station to Leipzig. On average the journey tales 1 hour 12 minutes. For train times and to book a ticket, click here.

Things to Do in Leipzig Photo Gallery