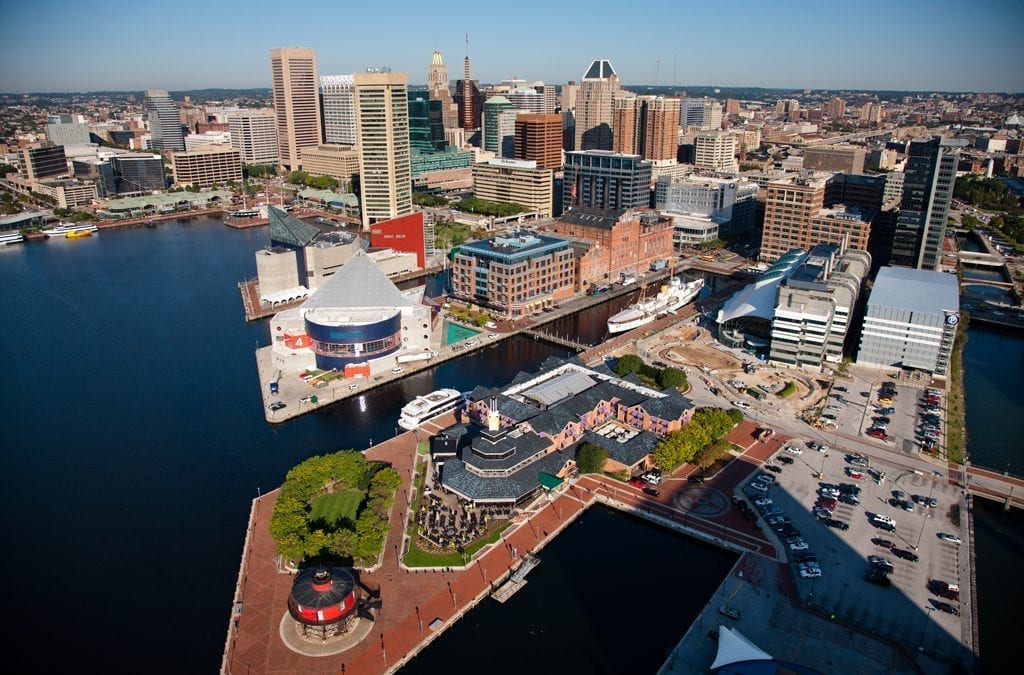 Visit Baltimore a City of Renaissance

Located just two hours south of New York and forty minutes north of Washington D.C, Baltimore, Maryland glistens as a modern day American city, positioned perfectly in the cultural and historical pocket of America. Distinguished by its walkable waterfront, exploding culinary scene and diverse travel experiences, the city has something to offer every traveller, so now is the time to visit Baltimore.

With its vast collection of attractions and surge of new hotel developments, the city of Baltimore has witnessed a dramatic urban renaissance, transforming its many neighbourhoods into trendsetting, cultural hubs. Known as the birthplace of the American National Anthem, Baltimore’s history is ever-present, however in efforts to revive the city from its more traditional roots, the city welcomes an exciting cultural movement, defined by a buzzing energy and bold architectural style. The city’s various neighbourhoods are what give Baltimore its sense of character and individualism, and each are defined by their own distinct aesthetic and flavour. From grunge to glitz, Baltimore’s many districts have undergone an exciting transition, boasting charm and character: from the cobblestone-lined waterfront of Fell’s Point to the epicentre of hipster Hampden; historic Federal Hill to the upmarket, trendy Harbour East.

Perfectly capturing the city’s revival story, The Sagamore Pendry hotel embodies Baltimore’s history and modern day aesthetic. Poised in the storied 1914 property on the Recreation Pier, an iconic landmark and former gateway for immigration, the hotel honours the city’s past yet reimagines it for today’s modern traveller. With 128 guestrooms and luxury suites, the hotel reigns as one of Baltimore’s finest lodging options and offers unparalleled views onto the waterfront in Fell’s Point neighbourhood.

Hotel Revival, a Joie de Vivre property, opened on May 3, 2018 in the Mount Vernon Cultural District. Highlights include a ground-floor signature restaurant and bar, three private karaoke boxes, a second-floor reception and lobby lounge with a dedicated bar, and an enclosed rooftop bar and restaurant with prime views of the Washington Monument and surrounding neighborhoods.

If you don’t want to visit Baltimore, but are planning a trip to the States, then why not try Pittsburgh

Serving as a renowned culinary hub, Baltimore’s food aims to inspire and its reputation for fresh seafood has lured travellers from all corners of the globe, enticing them with the ever famous Maryland blue crab, craft breweries and inspiring chef-driven concepts. With the opening of R House and Mount Vernon Marketplace, along with traditional spaces like the Lexington and Cross Street Markets, Baltimore’s food hall scene is booming. The vibrant mix of traditional regional cuisine and ethnic dishes are spread out among the many different neighbourhoods, from traditional crab feasts in the Inner Harbour, authentic Spanish and Korean cuisine in Mt. Vernon, to homemade pasta and Italian pizzerias in Little Italy.

Its portfolio of museums provide visitors with an exciting spectrum to choose from, ranging from history to nature and art. The National Aquarium houses the extraordinary Blacktip Reef Exhibit and man-made Indo-Pacific reef, a colourful display of corals, darting fish and the 500-pound green sea turtle. More so, The Baltimore Museum of Art boasts the world’s largest collection of Henri Matisse, encompassing more than 1,000 of his pieces, ranging from painting, prints, drawings and photographs. Set to open later this year, the Museum will house the first major exhibition of Baltimore native filmmaker John Waters’ titled ‘Indecent Exposure’. Best known for the movies ‘Hairspray’ and ‘Cry Baby’, the display will focus on popular culture, films and the artist’s childhood, showcasing over two decades worth of work from his portfolio, using photographs, sculptures, sound works and video. The American Visionary Art Museum – Baltimore’s one-of-a-kind museum, highlighting work by intuitive, self-taught and untrained artists, presents its latest exhibition, ‘The Great Mystery Show’, peeling away the veil of the unknown.

With its vast offering across Baltimore’s many neighbourhoods, the coexistence of history and contemporary appeal makes for an exciting visit and it has something to offer for everyone. Whether it’s exploring the variety of dining districts, upscale hotels or hipster hubs, the city of Baltimore continues to inspire travellers from all across the world, so why not visit Baltimore in 2018?

Visit Baltimore is the official sales and marketing organisation for Baltimore that generates economic benefits for stakeholders through the attraction of convention, group and leisure visitors. For more information, please visit www.baltimore.org.