On the cusp of the Cotswolds, just outside Malmesbury, Whatley Manor is a wonderful place to relax for a weekend or more, just make sure you don’t bite off more than you can chew, as Mark Bibby Jackson discovers. 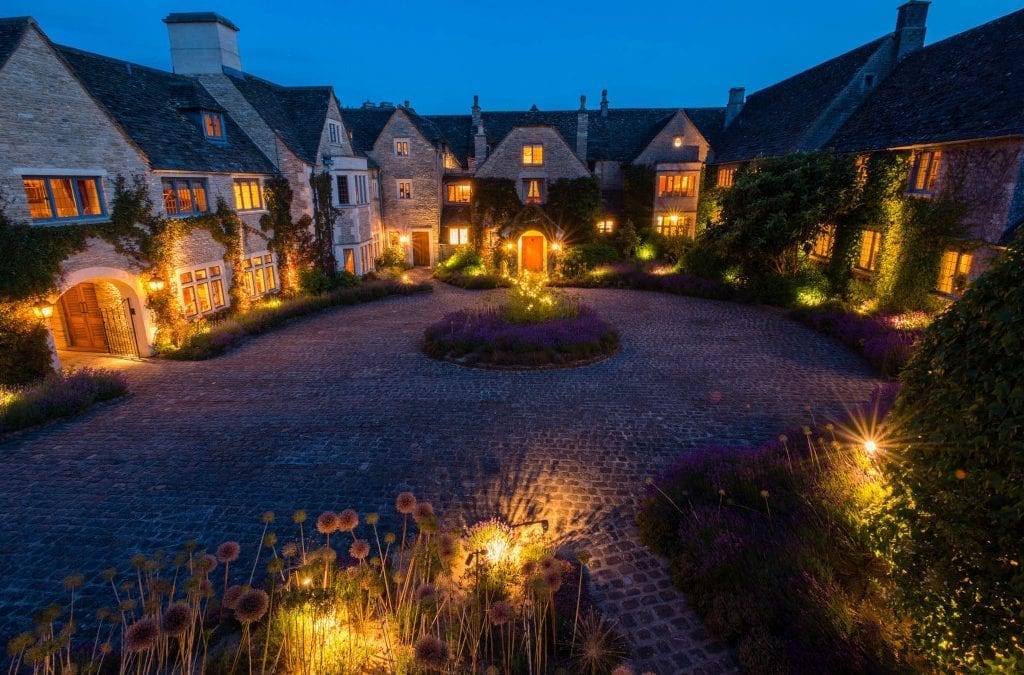 On the cusp of the Cotswolds, just outside Malmesbury, Whatley Manor is a wonderful place to relax for a weekend or more, just make sure you don’t bite off more than you can chew, as Mark Bibby Jackson discovers.

It was somewhere about my eighth or ninth course, I had lost count, that I realised the diet would have to be put on hold for another few days. The Michelin-star Dining Room at Whatley Manor is not the type of place to go in for things in halves, or sixes and sevens for that matter. Fourteen courses in total, if you count the bread and butter which arrived as course #6, and the optional cheese dish ¬– a quite delightful blue cheese stuffed waffle, arrived before me, each served as if I were a judge in Master Chef. Images of Monty Python’s Meaning of Life flashed before my eyes. Upon completing my challenge, I felt I deserved a medal like a London Marathon runner as the final dark chocolate truffle disappeared into my mouth.

According to one of the numerous waiting staff that passed before me like dishes in the night, the tasting menu created by award-winning chef Niall Keating has been pruned down recently. Fortunately, for those wishing for a moderate girth than Mr. Creosote, Whatley Manor also has the award winning Aquarias Spa, which includes a gym to burn off those excess calories, as well as a tepidarium, two steam rooms and a sauna. However, as my arrival timed with the hottest day of the summer, I opted to laze in the Hydrotherapy Pool and let the gentle jets massage all my aches and pains away, before relaxing outside with all the other sun worshippers.

Originally an 18th century farm house on Twatley Farm, Twatley Manor named after “to-the-wet-lea” was enlarged in the middle of the following century and then bought by the Canadian Herbert Coplin Cox in 1925. Much of the interior as well as the “Tudor” wing and coach house dates back to this period. In 1987, now re-christened Whatley for pretty obvious reasons, the place was transformed into a hotel, but it was only in 2000 that the painstaking restoration process commenced. Even now standing in the glorious courtyard, it is hard to work out which is Grade 2 original and which more modern. The interior rooms exude the grandeur of the 1930s. Current owner Christian Landolt wishes to create the sense of a home rather than a hotel, and relaxing here it is easy to imagine dining with Coplin Cox and debating the likelihood of war in Europe.

However, especially on a beautiful long summer’s evening it is Whatley Manor’s glorious 12 acres of land that draw me most. Divided into 26 gardens, each with their own unique character, often reflecting the 1930 design, there is plenty of room to wander or just to relax with a book. The grounds disappear into a small valley and the river Avon, albeit at one of its narrowest points.

Having dressed for dinner – well changed out of my shorts and sandals, at least – I sat on the terrace and tried one of Whatley Manor’s own sloe gins. A refreshingly sweet start to the evening, if I had known the gourmand challenge that awaited me I might have skipped the luscious olives.

An oyster transformed into turbot sashimi and then smoked eel tempura, as the wines fluctuated in time, as if choreographed by a maestro. South African chardonnay flowed into a sweet Riesling and even a Wiltshire pale ale, with barely a false step. Poached lobster with caviar and Japanese custard was replaced by a tomato scallop risotto and then a quite delectable fillet of sea bream. Even dining on my own I was entertained by the drama as each course was introduced to my dining companions for the evening.

If Mark’s experience has piqued your interest, why not read his review of Barnsdale Lodge, Your Base for Hidden England.

Having risen to the challenge I then retired to bed, thankful that I had no more than a couple of flights to ascend. A wonderful feast in a quite delightful venue, on my next visit I might start with a quick work-out in the gym or fasting for a week. However, one thing is for sure I will neither count the courses or the calories, and ensure I have another perfect respite.

A one-night stay at Whatley Manor costs from £260 for a standard room including bed and breakfast, plus full use of the award-winning spa Aquarias. The Dining Room is open for dinner from Wednesday through Sunday, offering a tasting menu for £120 per person (with the option of a matching wine flight for £80 per person and the premium wine flight is £156 per person).