Wales might be best known for its castles and sheep, but have you ever considered it as a beach holiday destination. Well, the weather might be far from ideal, but the principality does have the most glorious stretches of sand. Here is our pick of the best nine beaches in Wales. 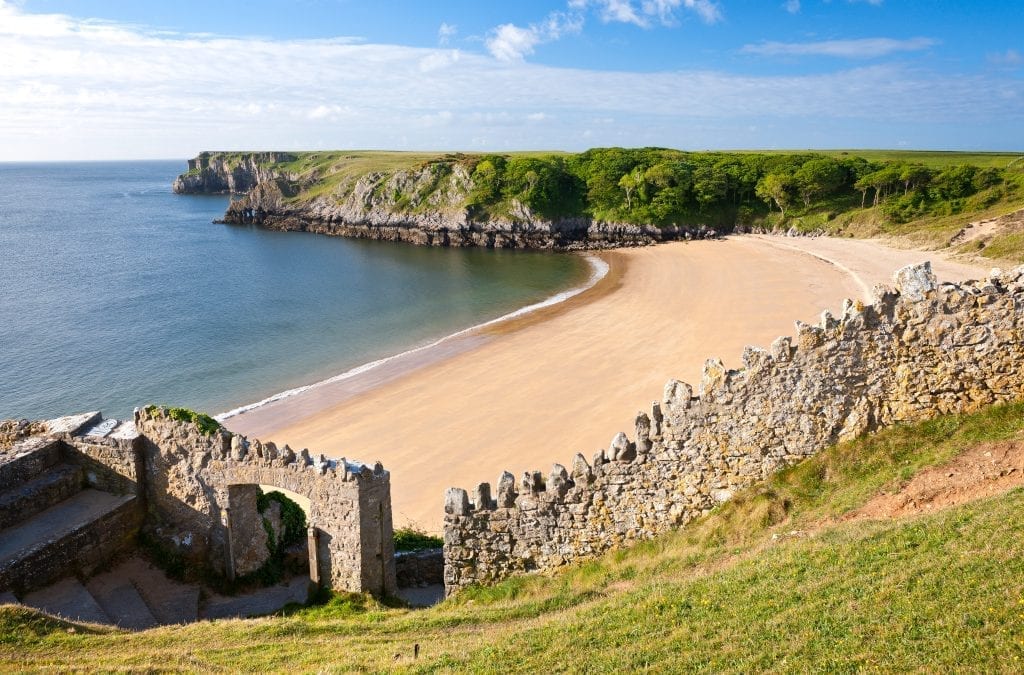 Wales might be best known for its castles and sheep, but have you ever considered it as a beach holiday destination. Well, the weather might be far from ideal, but the principality does have the most glorious stretches of sand. Here is our pick of the best nine beaches in Wales.

Voted one of the world’s best beaches by Passport magazine in 2017 and in the top 10 UK beaches in the 2018 TripAdvisor Traveller’s Choice Awards, the deep blue sea, beautiful rocky coast and smooth white sand of Barafundle Bay almost feels too good to be true. It’s been described as a “visual overdose of beauty” and is immensely private. It is only accessible by walking and with no cafe or facilities, it offers nothing but natural beauty.

The spectacular swims on offer at Confucius Hole are a must for any adventure seeker. This giant, stunning crater fills up into a blue lagoon with every tide and is surrounded by smaller caves, perfect for exploring. The caves and holes have been carved out by thousands of years of erosion and are found on one of the most remarkable stretches of coast in Britain. Look out for St Govan’s Chapel hidden in the cliffs, too.

For more inspiration, read Mark’s travels along the Pembrokeshire Coast Path, along which he encounters several of the beaches mentioned here.

Accessed by a long flight of steps, once you reach Skrinkle Haven you’ll see why it’s worth the effort. At the eastern end is Church Doors beach, a little cove which takes its name from the two high arched caves in the sandstone cliffs resembling the doors of a church. The beach was off limits to the public until the 1980s because it was situated beneath the firing arc of the Royal Artillery Range. It means that, although the beach has become popular for all kinds of activities including surfing, coasteering and boating, it still evokes a feeling of being largely unexplored.

Even the name of Whitesands Beach suggests beauty. The beach is renowned for its wide expanse of pale gold sand, secluded coves, and spectacular views over land and sea. It holds prestigious Blue Flag status and has a reputation for being one of the finest surfing beaches in Wales. The Pembrokeshire Coast Path passes alongside the bay, giving access in the north to the secluded bays of Porthlleuog and Porthmelgan, which are only accessible on foot, and the rugged coastal scenery of St David’s Head.

This small, picturesque bay of sand is backed by a grassy bank and sits in a cove defined by the headlands of Dinas and Graig Ddu. Its sheltered location makes it perfect for sunbathing and swimming, as well as watersports including sea kayaking and canoeing. The rocky headland is popular with anglers, although many visitors come simply to enjoy the Porth Iago’s white sands and clear blue waters.

A gloriously secluded beach overlooked by Mwnt’s famous cliffs, this is the perfect place to spot bottle nose dolphins, basking sharks and porpoise. Managed by the National Trust (and recognised as one of its top ‘special places’ in a public vote), Mwnt is situated off the beaten track and boasts stunning views over Cardigan Bay. The tiny white church above the beach looks straight out of a story book and is well worth a visit, too.

Bracelet Bay is said to be a favourite spot of Catherine Zeta Jones, who owns a home overlooking the Mumbles lighthouse with husband Michael Douglas. Features of the beach include an award-winning rocky shore, rock pools, a cave and a fossilised coral reef. It can boast Blue Flag status and a seaside award – and is said to be where you can find some of the tastiest ice cream in Wales.

Blue Pool Bay is one of Gower’s most charming beaches – and one of Wales’ most secluded. No roads or lanes lead up to the beach and this, coupled with its sheltered position at the base of u-shaped cliffs, mean that only those who know about its existence frequent its clean sands. At the southern end is the Three Chimneys rock arch where gold doubloons from an 18th century shipwreck have been found, but the beach’s main attraction is the eponymous natural rock-pool, deep enough to jump into from the rocks above.

The 8th best beach in the UK according to the Trip Advisor Traveller’s Choice Awards (and the third Welsh beach to make the list) is Three Cliffs Bay. It takes its name from its signature three limestone cliffs and offers a wilder experience with a spectacular shoreline of sand dunes and salt marsh. It’s easily one of Gower’s most photographed locations, and with good reason. The iconic summits are popular with rock climbers, and the gently sloping dunes are the ideal spot for a picnic.

For more about beaches in Wales, and everything else about the principality, click here.

Reno Nevada: the Biggest Little City in the World