Taking us around the Andalucia destinations of her adopted homeland, Rachel Webb shows us that this Spanish region has so much more to offer than the Costa del Sol. Taking us around the Andalucia destinations of her adopted homeland, Rachel Webb shows us that this Spanish region has so much more to offer than the Costa del Sol.

Andalucia is an autonomous community in Spain and the country’s most southerly region, is a long-time popular spot for its Mediterranean beaches and 300-odd days of sunshine. With the Costa del Sol’s Malaga International Airport as the arrival point for the majority of visitors, few of them head west towards the Atlantic Coast of Cádiz and stick faithfully to the Coast of the Sun.

How much further have you ventured in Andalucia, Spain? Can you name any other Costas? What about some of its hinterland provinces? I’m going to whizz you around my adopted land – introduce you to the coasts, the eight provinces, and a few of its lesser known sites as well as some UNESCO monuments.

A (Very) Brief History of our Andalucia destinations

Many inhabitants have left traces all across Andalucia since cave painting days – the Phoenicians, Carthaginians, Greeks, Romans, Visigoths, Vandals and Moors. It is the Moors, who inhabited this land for over 700 years and named it al-Andalus, who have most left their marks on the customs, culture and castles that enrich the whole of Andalucia.

The coastline of Andalucia stretches from the region of Murcia on the Mediterranean to the border of Portugal to the west, covering over 800 km, most of which are beaches, from tiny little sandy coves accessible only by foot or sea at Cabo de Gata in Almeria, to the long stretches of fine white sand in Cádiz and Huelva provinces.

The Costa del Sol (Coast of Sun or Sunny Coast) is around 150km long and one of the middle parts of Andalucia’s southern coastline. It’s surrounded by the Costa Tropical in Granada province and the Costa de Almeria in the east, and the Costa de la Luz (Coast of Light) stretching from Cádiz to Huelva in the west.

Malaga airport is more or less central and the only main airport. Although there are three others – Almeria, Jerez and Granada – most visitors fly into Malaga with their destination usually located within an hour from the airport. But head further inland and you’ll find a lot less visitors – lose yourself in the vast swathes of mountain ranges or sierras with excellent walking opportunities, or visit the whitewashed villages scattered throughout this region.

Andalucia Points of Interest: the Provinces

Larger than several European countries, the region is immense and divides into eight provinces with capital cities of the same name. Traces of its rich history of people and conquests are scattered throughout, and in some cases they’re still being discovered or uncovered.

As we’re heading inland I’ll bring you to the most northerly province (“my” home province) of Jaén (pronounced “hi-en”) – one of Andalucia’s least heard of and least visited. This is the land of olive groves where regimented rows of olive trees can be seen standing in line up hills and down valleys – a multitude of dots surrounded by clay-red soil. Not only do its 66 million olive trees make Jaén the world’s largest olive oil producer, but the province is also the green heart of Spain with more protected areas than anywhere else in the country. Moreover, Jaén is home to more castles and fortifications than any other region in Europe and houses the best collection of Iberian art in the world.

Jaén’s neighbour to the east is Córdoba, another land-locked province, boasting mountains – the Sierra Morena – as well as plains full of sunflower fields and wheat. To the north it borders with the autonomous community of Extremadura where black pigs – famous for their cured ham or jamón ibérico – can be seen roaming and foraging the flatlands. The enormous Guadalquivir River flows right through the provincial capital itself and irrigates an important part of central Córdoba.

Leaving Córdoba and heading west on our Andalucia destinations discovery we find Seville, a calmer and more gentle land, and the only other inland province. The plains of the Guadalquivir run through the land here while the sierras or mountains rule in the north. Less dramatic than those in Córdoba, they’re more like rolling hills. Don’t just visit the city here – Seville’s smaller towns and scenery are just as interesting and less busy. The Roman cemetery (Necrópolis Romana) is one of the most important in Spain with hundreds of tombs and a partly excavated amphitheatre.

Heading due west lies the quieter province of Huelva bordering with Portugal. The city and its port were founded by the Phoenicians who were attracted to nearby rich mining land. It was because of these mines that football, it is said, was introduced in Spain when English miners were brought over to work the mineral deposits. Another of Huelva’s claims to fame is that Christopher Columbus first set sail from the town of Palos de la Frontera, where archaeological excavations have revealed the quayside from where he departed in 1492 to eventually reach America.

Southwards down the Atlantic Ocean coast we find the province of Cádiz with another ancient Phoenician port city as its capital. Cádiz’s wild sierras are home to pretty, white hill towns – the route of the “White Towns” or Pueblos Blancos plots many of the more attractive ones – while its coastal area boasts long expanses of white sandy beaches with the “windy corner” of Tarifa a windsurfer´s dream. Cádiz is also home to the “Sherry Triangle” which are three of its towns famous for their production of sherry wines.

We´re sailing east now on our Andalucia destinations voyage along the Costa del Sol and the province of Málaga, birthplace of Pablo Picasso and, more recently, Antonio Banderas. Blessed with a huge coastal strip as well as incredibly stunning inland areas such as the impressive karst landscape of El Torcal Natural Parkland and the “flamingo lake” at Fuente de la Piedra, this is also where the prehistoric UNESCO site The Dolmens of Antequera is. Charming hilltop villages abound, especially in the Axarquia area to the west.

Moving further along the coast we arrive in Granada and its Costa Tropical where pebbly beaches and crystal clear waters make for great snorkelling and diving. Have a swim in the morning and ski in the afternoon on Granada’s Sierra Nevada ski slopes. This is an incredibly diverse province, from mainland Spain’s highest peak (Mulhacen 3,478m) to the cave-dwelling town of Guadix, and of course the beautiful Alhambra Palace and the Moorish Albaicin in the city itself – both World Heritage Sites.

We conclude our tour of Andalucia destinations at its eastern Mediterranean corner where Almeria is, containing Europe’s only lunar-like desert landscape. Home now to several Western-based theme parks, this is also the setting of many Spaghetti westerns of the 1960s and 70s. Look out for the Ruta del Cine or Cinema Route which compares old movie images with their present-day equivalents. Finally, the Cabo de Gata-Nijar Natural Park is Andalucia’s largest area of protected coastal land – an isolated and wild place home to unspoilt, hidden coves.

So the best time of the year to visit Andalucia depends on what you’re interested in. Go in April, May and October if you are visiting the Guadalquivir plains and cities like Seville and Cordoba, to avoid the scorching summer heat. But bear in mind that it may sometimes rain. However, if you are venturing into the high mountain ranges, than the summer months may still be an option as it will be cooler at those altitudes. The winter period will make for pleasant, sunny weather in the plains but quite cold in the interior, with occasional spells of bad weather.

Go in June to mid-September if you’re heading to the beaches. Just bear in mind that the evenings may be a little cool and windy, especially on the Atlantic coast.

Wintertime will make for a great combination of skiing in the Sierra Nevada and mild weather at the sea.

Find the best hotel deal in Andalucia via our hotel booking portal. It costs you nothing extra, but the small commission we earn helps to keep this site running.

The official tourism website of Andalucia contains a wealth of practical details and ideas on Andalucia destinations. 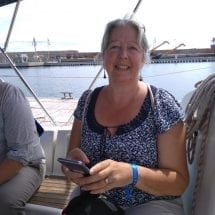 Rachel Webb has lived in Jaén province since moving from her native England in 1996. When she’s not drinking Earl Grey tea or Spanish wine on her patio, she can be found exploring Spain and writing about it on her blogs Andalucia Explorer and Luxury Spain Travel while visiting boutique hotels to add to her portfolio Only Spain Boutique Hotels.