A medieval market town littered with fine examples of Georgian architecture, Mark Bibby Jackson discovers that Beverley is steeped in tradition with the Beverley Minster, great pubs and a cheese and pickle sandwich to fight over. 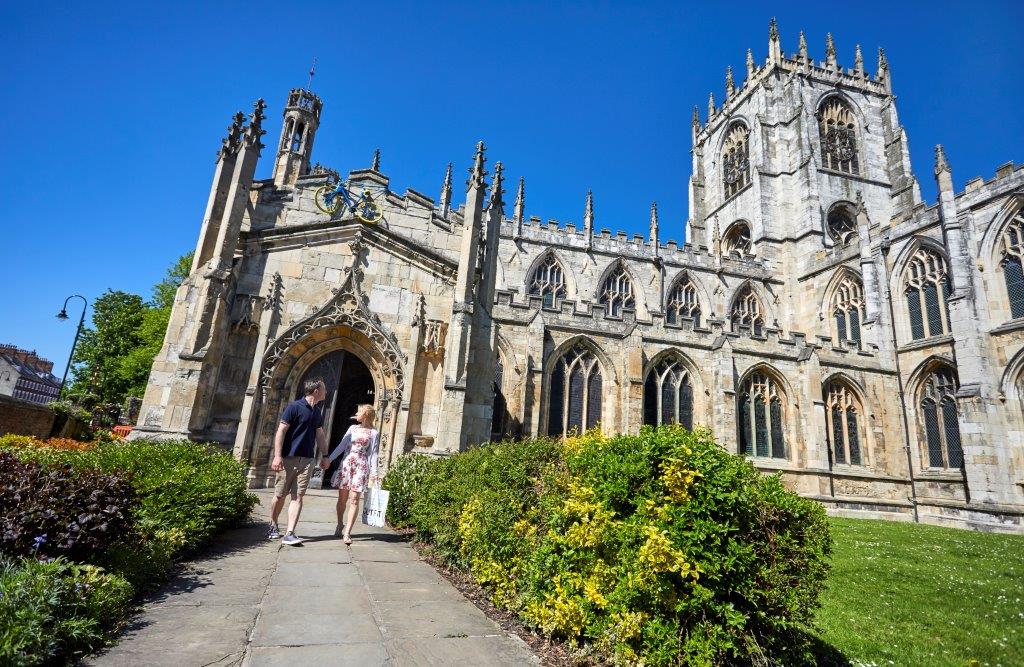 A medieval market town littered with fine examples of Georgian architecture, Mark Bibby Jackson discovers that Beverley is steeped in tradition with the Beverley Minster, great pubs and a cheese and pickle sandwich to fight over.

Since Hull was declared the UK’s City of Culture in 2017, the East Riding city has benefited from a series of regeneration and cultural projects, and its tourism industry has grown exponentially. However, it is not just the city itself that has reaped the rewards. Only eight miles away, the Georgian town of Beverley has also benefitted.

Paul Schofield runs tours of both Hull and Beverley. The previous year he escorted me down the narrow lanes of the former city ­– as well as a few pubs – and this time it is the turn of its sister town. After our morning tour, he will head back to Hull, where he lives, for an afternoon tour, before returning once more to Beverley for a Ghost Tour of the town. He also runs pub tours.

“Times are good,” admits Schofield, who started running his tours thirty years ago, but has seen them really take off in the last couple of years. He, for one, will not be complaining that Hull preserves its City of Culture status for a further two years.

A Tale of Two Markets

For Schofield, there is a distinct difference between the East Riding neighbours.

“While Hull is a historic port city rediscovering its importance especially after the success of the City of Culture,” he explains, “Beverley is a thriving market town and one of the UK’s most desirable places to live.”

This is something that had escaped me the previous evening as we arrived in the wake of Storm Ali to check into Trinity Guest House, a friendly family-run B&B right next to the station and close to Beverley Minster. Then we had scampered through the rain for our meal at the Kings Head, which had the most more-ish chocolate brownie I have ever tasted, ignorant of what lay around us.

But as we awoke to blue skies, the attractions of Beverley became more apparent, especially after a hearty breakfast.

Beverley has two markets – the Wednesday and the Saturday, each with its own square. In medieval times these used to compete against each other, but now a spirit of cooperation exists, with stalls from the Saturday market spilling out into the Wednesday Market square. The latter was also known as the fish market, and the traditional fishmongers H Peck and Son still remains. However, nowadays the Saturday market is the undisputed winner, when the town is “buzzing”, according to Paul, with over 90 stalls offering various goods.

There are two explanations for the origins of the name Beverley. The initial beaver that appears in the town badge seems undisputed, but the subsequent ley could refer to the Old English word leah which means a clearing in a forest, or to a lac or lake. While Paul prefers the former derivation, the creators of the town badge that consists of a beaver over some waves of water, seem to opt for the latter. Whichever way, when you enter Beverley you are definitely visiting Beaver Town.

A compact town, it’s easy to navigate your own way around although that way you would miss Paul’s insight, especially as there are two trails hidden in the city. The first is buried in the floor, with carvings such as fish, eels and thimbles indicating when you have arrived at a point of interest, just like in Hull. See if you can identify the six thimbles at the Toll Gavel pedestrianised street just before you arrive at the Saturday Market.

The second is the Elwell Trail with paintings by Fred Elwell and his wife Mary, dotted around town. One work, entitled Police Court, 1938, is hung just outside The Guildhall. Built in 1501, the civic building has a Greek frontage dating from the 1830s. Open on Fridays and some Wednesdays, and free to enter, this is well worth a visit, if only to see the wonderful, restored Court Room captured in the painting outside, and inside of which hangs the original.

Although Beverley still has many fine examples of Georgian architecture, the town’s real gems pre-date these. The most obvious is Beverley Minster that was built from the 1100s to 1400. More grandiose than many a cathedral, this wonderful example of gothic religious architecture provides the perfect setting for one of the many free concerts, especially at lunch time. While we were there, a recital took place with soprano and mezzosoprano.

The windows close to the main entrance are of particular interest. The windows on the left are clearly of a different style than those on the right, reflecting the length of time it took to construct Beverley Minster, during which many of the townsfolk were wiped out by the Black Death, including the stonemasons, and in the interim styles had changed.

Just around the corner from Beverley Minster is the old Dominican Beverley Friary that dates back to the 13th Century. It became first a family home and then a guest house after the dissolution of the monasteries, and is now owned by the local council and maintained with the assistance of the Beverley Friary Preservation Trust. Since 1984, it has been run by the Youth Hostel Association, making it one of the quirkiest hostels in the country.

At the far end of the town from Beverley Minster, lies Beverley’s other main church – St Mary’s. Though lacking the grandeur of its cross-town rival, the church has a more intimate ambience and an interesting ceiling dating back to 1445, with paintings depicting the Kings of England from Brutus to Henry VI. There is also a carving of The Pilgrim Hare that is thought – by Paul at least – to be the inspiration for the white rabbit in Alice in Wonderland.

Of Ghosts and Pubs

Not all of Beverley’s ancient buildings are religious in nature. Just across from St Mary’s, the Beverley Arms is the town’s premier hotel. Dating back to 1686 – Trollope stayed here during his failed attempt to become MP for the town. It has been lovingly restored and recently re-opened.

But it is in Beverley’s hostelries that the town’s real history lies. The previous night, whilst avoiding the rain, we had visited a couple of pubs recommended by Paul – strictly for research you understand.

Despite its Georgian frontage, and within staggering distance of both Beverley Minster and Friary, Monks Walk Inn dates back to 1270; the room at the back has a distinctly medieval feel to it. A pub has stood here since the late 1600s; you sense that many a non-communion tipple has been consumed here before evening mass. Recently bought by a local family, the pub is very much embedded in the community, with music played regularly, and conversations held at the bar that date back even further than the structure itself.

Nothing can quite prepare you for Nellies. Bought by Francis Collinson in 1927, the pub was run by her daughter Nellie up to 1976. Originally a coaching inn, the pub predates 1666, when it first appeared in records, and as such is one of the oldest pubs in the area. Gaslights, chandeliers, stone floors and open fires co-exist in a hotchpotch of higgledy-piggledy rooms, as if time has stood still here and Charles Dickens is quaffing ale in the corner. Pubs like Nellies just don’t exist any longer, and I suppose even it doesn’t as it was renamed The White Horse Inn by current owners Sam Smiths. As one customer said during our visit that first night, “You’d travel a hundred miles to visit this,” and he was right, although we had only driven just over 50 from Whitby.

Our tour complete, Paul and I retire to T C Patisserie for lunch – the long drive back south precluding a return visit to Nellie’s, although I doubt she looks her best in daylight. If Nellie represents Beverley’s past, then T C is its future. An unpretentious, independent, patisserie and café, it recently won the award for the Best Cuppa 2018 in Beverley. However, it is the freshness of the produce and the quality of the baking that most impresses – although the coffee tasted great too – as I make the mistake of complimenting French co-owner Thierry Condette on how good his “simple” cheese sandwich was.

“Nothing is simple,” the French baker explains as he proudly shows me the loaf he had baked that morning, as well as his small kitchen, before his wife Nicky asks about the homemade pickle. Narrowly, I escape with my life, a small loaf and two patisseries my mother would later describe as ‘delicious’.

Is this the new face of Beverley? I wonder whether Nellie would approve.

If you enjoyed Mark’s adventures in Beverley discover what he got up to in Whitby and the North York Moors.

One of the leading draws to the town Beverley Racecourse. The 2019 Flat Racing Season Opener is on 17 April. For more details of the whole season visit here.

The weather can have a great bearing on your holiday, for the current weather in Beverley, click here.

If you are booking a hotel or guest house in Beverley, perhaps you could consider doing so via our hotel booking portal. It will cost you nothing extra, but the small commission we make helps us with the running of this site.

One of the highlights of the Yorkshire festive season, the Beverley Festival of Christmas, draws over 60,000 people each year. Click here to read our preview of the festival.

For more information on Beverley, visit: visitbeverley.org, or for Hull and the surrounding area, visithullandeastyorkshire.com

If you are interested in joining one of Paul Schofield’s tours, visit: Tourhull.com.