Mark Bibby Jackson ventures into the Potteries to discover the most fantastic gardens, a model pottery and sips tea at the World of Wedgwood. 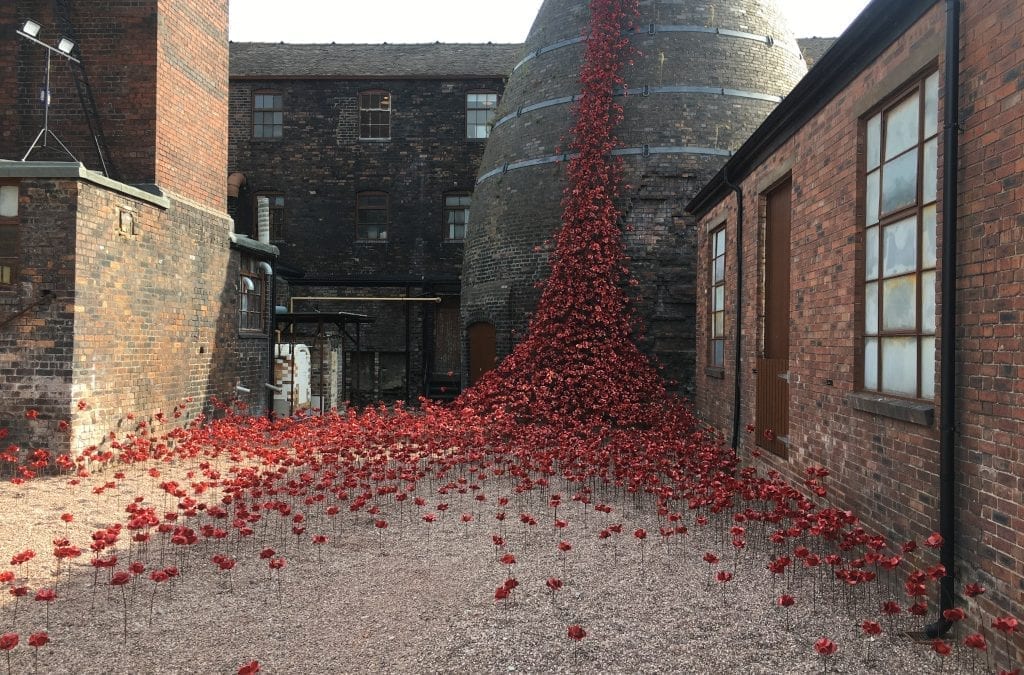 Mark Bibby Jackson ventures into the Potteries to discover the most fantastic gardens, a model pottery and sips tea at the World of Wedgwood.

At school I perpetually came bottom of the class in art. So, as I am presented with a potter’s wheel at World of Wedgwood I fear for the worst. My misgivings are only partially alleviated when two young girls take the wheels adjoining mine and set upon their clay with what I can only describe as the foolhardiness of youth. I realize, not for the first time in my travels, that I will be shown up by someone a mere fraction of my age.

Stoke-on-Trent is the self-proclaimed World Capital of Ceramics, and Wedgwood is at the very heart of it. Josiah Wedgwood, a native of nearby Burslem, established his factory Etruria here in 1769, next to the Trent and Mersey Canal. The region is blessed with coal and clay – the two key ingredients for pottery in the 18th century, although coal has since been displaced –, and the canal provided easy access to the port of Liverpool and markets around the world.

Etruria is now no longer, for its site has been transformed into the Festival Park, where ten-pin bowling has replaced throwing on the potter’s wheel. One of the existing buildings still remains, next to the Best Western Hotel where we had just spent a comfortable night, made more enjoyable by a quick pint at the Toby Carvery by the marina along the canal, as a flock of Canadian geese flew in to say hello.

Set in the 240-acre Wedgwood Estate, the World of Wedgwood only opened in 2015. Its museum contains some 3,500 pieces of pottery ranging from the 18th century to the present day. The hour-long tour comes highly recommended, replete with information on how Wedgwood funded his pottery after meeting Thomas Bentley in 1762, and made it into the household name it is today.

There is something quintessentially English about afternoon tea, even though the tea came from China, India and even further east, and it was scarcely lunchtime

Some of the most famous pieces include the Frog Service, which was made for Catherine the Great in the mid-1770s, and the Portland Vase, although this is only a copy of the original which is on display at the British Museum. Apparently the most valued piece in the Wedgwood Museum is not made of porcelain, but a Wedgwood family portrait painted by George Stubbs that Josiah Wedgwood hated so much he refused to pay for it, leaving his son to pick up the bill after his death.

As the factory – the only place where Wedgwood jasperware is made – was closed for the bank holiday, we were compelled to retire to the Tea Room.

There is something quintessentially English about afternoon tea, even though the tea came from China, India and even further east, and it was scarcely lunchtime. Now, I am no tea aficionado, although I know enough not to add milk to my Earl Grey, but on this occasion ignorance proved blissful as the resident tea-taster talked us through the various leaves available, while we sipped white, black and fruit teas, with no PG Tips in sight. Eventually, I settled upon an Earl Grey blend that would make Twinings blush with shame before devouring our only-just-afternoon tea; the scones were divine.

Wedgwood was not the only potter in town. Earlier in the day, we visited Middleport Pottery, the home of Burleigh pottery. When opened in 1889, Middleport was very much a state-of-the-art factory exporting, once more via the Trent and Mersey Canal and Liverpool, its goods around the world. The company had offices in New York, Australia, New Zealand, Canada and South Africa.

Middleport was in many respects a model factory. The first to have an on-site bath house for staff, it also implemented an over 13 years of age recruitment policy, unusual at that time. During our visit, the site was crowded due to the World War I memorial Weeping Window sculpture, a series of poppies cascading to the floor from the bottle oven, being on display here. But even then we were able to find some space on the Heritage Trail which provided us with access to rooms excluded from the general factory tour, such as the bath house and last remaining bottle oven. Of most interest, though was the Mould Store, which contains many of the 1,400 moulds on the site.

In 2011 the factory was at risk of closure, but fortunately The Prince’s Regeneration Trust stepped in with a £9 million project to save Middleport. The aim was to reconnect the pottery with the local community. Several workshops are established on the premises, in a style that reminded me of the Spinnerei in Leipzig, only on a far smaller scale. Here, local artists create their own ceramic works, which can be bought direct from them. There is also a series of events at Middleport, including a Victorian Christmas on 16 December.

Away with the Fairies

Our short trip to the Potteries concluded in the most spectacular gardens. References to Trentham can be found in the Doomsday Book, although the original hall was replaced in the 1630s by an Elizabethan Hall, which in turn was demolished in 1911/12 as the property was deemed no longer desirable, due to the excessive pollution in the area.

The hall may be no more but the gardens remain. Close to the remains of the hall are the Italian Gardens which have recently been revived by Tom Stuart-Smith, and next to these the Rivers of Grass and Floral Labyrinth designed by Piet Oudolf.

The gardens have justifiably been described as the finest in Britain, by James Alexander Sinclair of The Daily Telegraph. Certainly, judging by the crowds of young and old flocking in there on this Bank Holiday Monday, his views are shared by many.

However, it is the Capability Brown designed parkland and mile-long Trentham Lake that is the centrepiece of this little piece of England.

Strolling around the lake, you realise how much the gardens are part of the local community, especially as little boys and girls rejoice as they discover one of the 15 fairies dotted around the Fairy Trail, and perhaps it is no great loss that the Elizabethan Hall no longer remains in private hands.

Back at Wedgwood, my potter’s wheel examination now complete, I hand the results of my labour over to my instructor, who places it carefully to one side to dry. As I write this article, the small jar I helped to create has just arrived through the post. It might not be the finest example of Wedgwood pottery, but for me, it’s the perfect memento of my day out in the Potteries.

For more ideas on things to do in and around Stoke-on-Trent, visit www.visitstoke.co.uk

And for more information on the World of Wedgwood, click here.

Ethical Travel Dilemma: To Boycott or Not to Boycott