A new exhibition, Orlando at the Present Time, launched at the Charleston Farmhouse marks the 90th anniversary of Virginia Wolf's seminal novel, Orlando. Kate Burbidge argues the novel is as relevant now as when first published.

A new exhibition, Orlando at the Present Time, launched at the Charleston Farmhouse marks the 90th anniversary of Virginia Wolf’s seminal novel, Orlando. Kate Burbidge argues the novel is as relevant now as when first published.

Charleston Farmhouse, sits on the edge of the Sussex village of Firle, at the foot of the South Downs. For 50 years it was the country seat of the Bloomsbury Group, having been taken over in 1916 by artists Vanessa Bell and Duncan Grant. Bell and Grant were soon joined by friends and family, writers Virginia and Leonard Woolf bought Monk’s House in nearby Rodmel three years later, and the house became a focal point for artists, writers and intellectuals at the forefront of the most radical movement of their day.

Grant and Bell shared their home for quite long periods by Clive Bell, David Garnett, and Maynard Keynes. This somewhat unconventional house hold was frequently visited by the Woolfs, E. M. Forster, T. S. Eliot, Lytton Strachey and Roger Fry. Such a creatively fertile environment, the artists transferred their talents from the studio to the walls, doors and furniture of the house, creating a style still intrinsically linked with the Bloomsbury Group.

The Charleston Trust was set up in the 1980s as a charity to restore and conserve the group’s legacy and the fabric of the building as they left it as well as the considerable collection of important artworks amassed there. The collection includes work by Renoir, Picasso, Derain, Smith, Sickert, Tomlin, and Delacroix.

Open since 1986, the publicly accessible rooms display examples of the decorative art of the Bloomsbury artists: murals, painted furniture, ceramics, paintings, textiles, and objects from the group’s Omega Workshops, as well as serving as a backdrop to illustrate the lifestyle of the influential collective.

This September, Charleston opened its first exhibition and events spaces, enabling temporary exhibitions to be mounted at Charleston for the first time, and keeping the venue open to the public year-round.

Orlando at the Present Time

Launched on September 8, the inaugural exhibition, Orlando at the Present Time, marks 90 years since the publication of Virginia Woolf’s seminal novel Orlando: A Biography. The exhibition examines the history of the novel and draws together diverse responses by contemporary artists to Woolf’s ground breaking novel which deals with the fluidity of gender and sexuality; a novel ahead of its time, and one extremely relevant to the current climate of gender and sexuality inclusivity.

Woolf’s use of a protagonist who changes gender identity opens up a dialogue often discussed since its publication but no more so than now. Orlando at the present time re-examines that dialogue and creates a focus, not only for students of gender and feminist theory, but also for those wishing to engage further with the queer history of the Bloomsbury group.

Responses by artists such as Paul Kindersley, Delaine La Bas, and Kaye Donachie and Matt Smith will be displayed among letters, photographs and objects relating to the novel’s original publication that have not previously been often in the public gaze, including work by Annie Leibowitz, original costumes designed by Sandy Powell for the 1992 film – ‘Orlando’, worn by Tilda Swinton, and a series of plates decorated by Bell, illustrating the Orlando narrative.

Exploring the novel’s themes and background, the whole is a diverse mix of contemporary commissions set amongst historic and archival artefacts. Textile works by Matt Smith and Kaye Donachie interrogate notions of gender, identity and status, and whether the dynamics at work in those contexts have changed much over time.

Kindersley’s core work for Orlando explores the book’s motifs, re-presenting them through a contemporary filter. Reflecting the Bloomsbury artists’ repurposing and repainting of ordinary found objects, Kindersley has reinterpreted the 16th century allegorical painting chosen by Woolf as the original book cover in an uncompromising interrogation of gender queerness. Delaine Le Bas uses her photographic responses to two photographic illustrations from the novel, as a platform to examine notions of cultural difference, otherness and cultural appropriation. Both images – The Russian Princess as a Child’, a portrait of Vanessa Bell and Duncan Grant’s daughter Angelica, and ‘Orlando around the Year 1840’, showing Vita Sackville-West dressed in embroidered shawls and a large hat in a photograph by Vanessa Bell ­– borrow from other cultures. Le Bas’ work questions the intention behind such “dressing up”. Is it homage or patronising, disrespectful or aspirational?

The radical, non-conformist ethos of the artists, writers and intellectuals of the Bloomsbury set forms the core focus of the new programme at Charleston, opening a contemporary dialogue with those who lived and created at Charleston over a century ago.

The artists’ responses all deal in some way with identity and perception. The way gender queer, transgender, LGBTQ, women and feminists are perceived by themselves, each other and the world in general.

The exhibition is accompanied by a new publication, The Charleston Press and a research journal.

Orlando at the Present Time

Runs in the Wolfson Gallery until 6 January 2019

The Famous Women Dinner Service is on display in the Spotlight Gallery until summer 2019. Zanele Muholi: Faces and Phases in the South Gallery runs until 6 January 2019 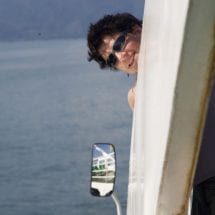 Born in South Wales and rapidly relocated to Beirut, Kate has always enjoyed wandering. The travel bug took her early, having had the good fortune to be taken around various cultural highlights of Europe as a child. Kate enjoys sampling different cultures, food and languages, which is pretty much how she ended up in SE Asia; where she stayed for several years. A grammar authoritarian, walking thesaurus, art nerd and beach bum, Kate has since returned to Europe but she’s not ready to hang her all terrain flipflops up just yet.