For a small island nation, cultural Taiwan has been punching well above its weight with the establishment of several world-class performance venues in only the last few years. 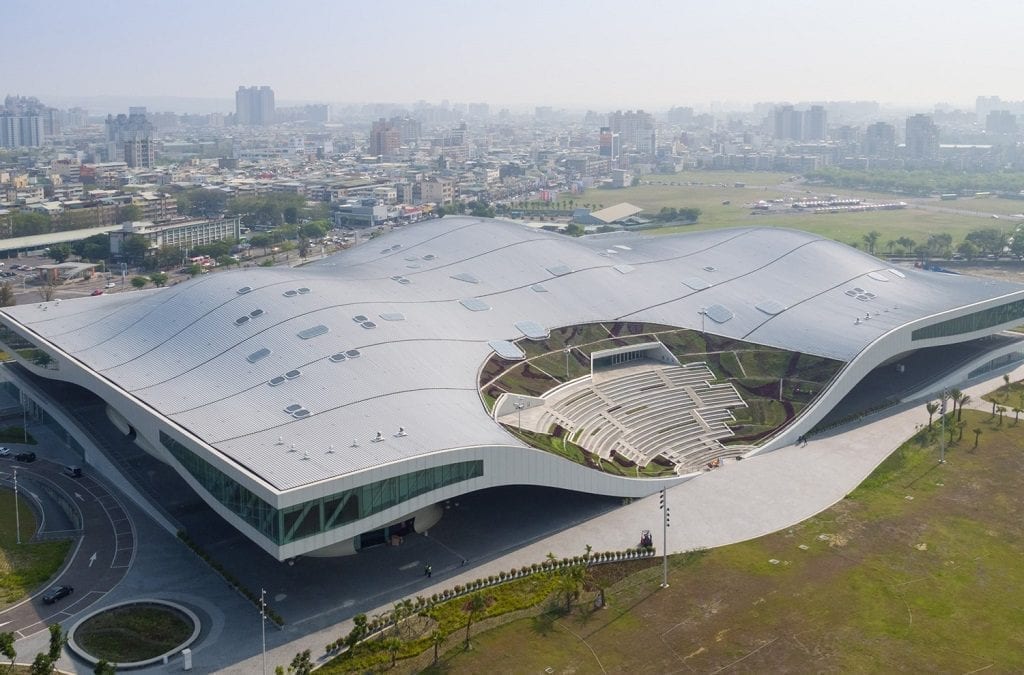 For a small island nation, cultural Taiwan has been punching well above its weight with the establishment of several world-class performance venues in only the last few years.

If this is a cultural diplomacy defence – as some argue – against Taiwan’s giant neighbour China who dollar-pressurises the world into not recognising the island nation, then thank you China. For visitors to Formosa – Portuguese for Beautiful Island – as Taiwan used to be formerly known, are now spoilt for choice when it comes to topnotch cultural offerings.

Here we look at the top five experiences that cultural Taiwan has to offer its visitors:

Cultural Taiwan: National Kaohsiung Centre for the Arts, a.k.a. Weiwuying

At the top of the list is the spectacular, brand new performing arts centre Weiwuying – the biggest one on Earth – set in the heart of Taiwan’s main port city of Kaohsiung. Designed by Dutch architects Mecanoo who felt inspired by the meandering trunks of the banyan tree common in the area, the vast, undulating National Kaohsiung Centre for the Arts boasts an opera house, a concert hall, an outdoor theatre, a recital hall, a playhouse, a plaza and, with 9,194 pipes, Asia’s largest organ. As tens of thousands of people attended the gala opening earlier this month (October), its inaugural winter season is probably the best time ever to sample this cultural gem, impressive both for its state-of-the-art architecture and its programme packed with cutting-edge talent consisting of both international and local musicians, dancers and performers.

Only an hour away by train from Kaohsiung lies Taiwan’s second city – Taichung – and gateway for exploring the island’s mountains. Its National Taichung Theatre – the brainchild of architect Toyo Ito and composed almost entirely of curved, cave-like walls – officially opened only two years ago and has already established itself as a cultural behemoth. Apart from a rich programme of opera, music, dance and drama performances which are promoted as the theatre’s central mission, expect also free cultural activities, films, exhibitions, lectures and a family programme. Described at the time in the architect industry as an impossible structure to build, the eight-story venue is reflective of a coral reef and made possible only with the latest computational tools and construction techniques. With its location in central Taiwan, the National Taichung Theatre forms a coalition with the above-listed Weiwuying centre in the country’s south, and the National Theatre and Concert Hall located in the north of this small island.

While planning your trip to Taiwan, check out these three Taiwanese festivals: the Wang Yeh Boat Burning Festival, the Taiwan International Balloon Festival and the Pingxi Lantern Sky Festival.

Our favourite cultural attraction in Taiwan is still the National Palace Museum with its astonishing, unrivalled collection of ancient Chinese art. When in 1949 Chiang Kai-shek fled the communists in mainland China with his army to Taiwan, he brought with him well over half a million artefacts from the original National Palace Museum located in the Forbidden City in Beijing. Covering 8,000 years of Chinese history, the collection – the finest and arguably most important of its kind in the world – includes paintings and calligraphy, jades, carvings, ceramics, bronzes, rare books and documents, curios and more. Given its vast size, only one percent of the collection is exhibited at any one time and rotated frequently. Dubbed “Le Louvre of Taiwan”, the top three of best-attended exhibitions in the world in 2014 were at the National Palace Museum. Whereas the original museum in Taipei houses the largest collection and focuses on Chinese artefacts, its newly opened branch in the south-western city of Chiayi also exhibits art from other civilisations throughout Asia.

Cultural Taiwan: The Temples of Tainan

Claiming more Buddhist, Confucian and Taoist temples than any other city in the country – including some of Taiwan’s oldest and best preserved – the south-western city of Tainan is truly the spiritual capital of Taiwan. Which may not come as a big surprise given that Tainan used to be Taiwan’s capital for over 200 years and is the island’s oldest city – its name is claimed to be the origin of the island’s present-day nomenclature. The diversity of this city’s temples and shrines is truly staggering and they are literally everywhere, with over 1,600 of them registered in the county. Don’t think of it as an open-air museum – most temples, if not all, are fully functioning with the scent of burning incense filling the air and the clattering sound of crescent-shaped jiaobei – fortune-telling wooden blocks – tossed onto the floor. Originally established by the Dutch Vereenigde Oostindische Compagnie (East India Company), Tainan also boasts the historical 17th century Fort Zeelandia, one of Tainan’s most popular attractions. Temples not to be missed here are the Grand Matsu Temple, the City God Temple and the Confucius Temple.


Great to visit with kids and within a 45-minute-drive from Taipei, the small hillside town of Shifen has established a reputation for its Sky Lantern Festival, dubbed the country’s brightest and happiest event drawing big crowds every Chinese New Year. Legend has it that the tradition originates with the famed Chinese statesman Zhuge Liang (182 – 234) who sent military signals by deploying sky lanterns. Today, Pingxi District is the only place in Taiwan where the practice is allowed as the surrounding mountains make sure the lanterns don’t stray too far. People write their names and wishes on the lantern with a calligraphy pen before releasing it into the sky with a special ritual. The lanterns come in different shapes and colours, each having its own meaning, while more recently a lantern-retrieving and recycling programme make for a more environmentally friendly event. While in Shifen wander through the little lanes and alleys of Old Street bursting with tea shops and street food stalls, and its small, historical train station – originally built by the Japanese to transport coal – that sits right in the middle of it. Other attractions include the Taiwan Coal Mine Museum and the Shifen waterfall, the latter hailed as the most scenic waterfall in Taiwan.

If your stay is limited to Taipei, other recommended cultural highlights in the capital include the Taipei Fine Arts Museum with its impressive collection of modernist paintings from the Japanese colonial period; the Museum of Contemporary Art Taipei (MOCA), the country’s first museum dedicated solely to contemporary art and housed in a historical red-brick 1921 building; Huashan 1914 Creative Park where hip art exhibits and indie theatre meet cafes, design shops and restaurants; and Songshan Cultural and Creative Park set in an old tobacco factory and now home to art exhibitions and performances.

Find the best hotel deal in Taiwan via our hotel booking portal. It doesn’t cost you an extra penny, but the small commission we earn helps to keep this site running.

Cover image: the brand new National Kaohsiung Centre for the Arts is the biggest arts venue on earth.