Mark Bibby Jackson takes a Tiger Trail adventure to Nong Khiaw to discover 100 waterfalls, homestays and Lao-lao, and finds himself stumbling around in the dark. 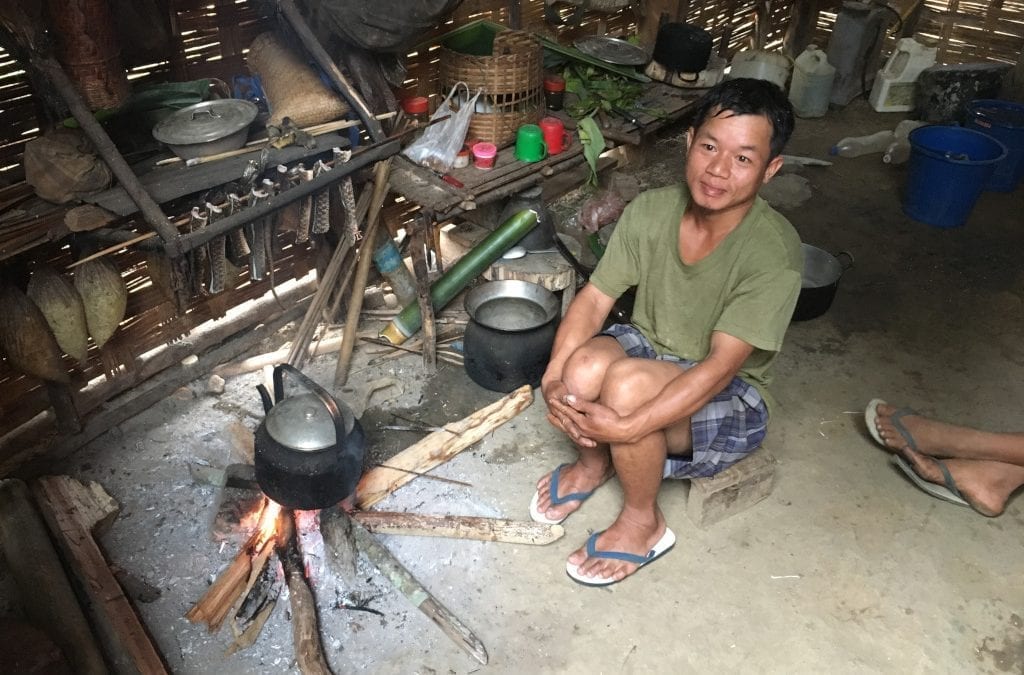 Mark Bibby Jackson takes a Tiger Trail adventure to Nong Khiaw to discover 100 waterfalls, homestays and Lao-Lao, and finds himself stumbling around in the dark.

Tan lifts his glass once more towards mine and smiles yet again. Cutting the air in a horizontal with his free hand, he lifts his murky glass of Lao-Lao and pours its contents down his throat. I have little choice but to do likewise. I slam my empty glass back down on the table, only to see the now familiar smile staring right at me. Four fingers are held up in the air.

“You said three,” I counter weakly.

“Four,” he replies. “You do four.” He refills my glass. My initiation is almost complete.

It is not the first time I have been here. That was many years ago in a village in northern Vietnam, at the engagement party of a work colleague as her father forced me to slam rice wine “trăm phần trăm” (literally 100%) with the other eight people sitting cross-legged at the high table. Only as I began to lose focus did I realise that I was slamming with each man in turn, rather than taking them on collectively; the rest of the evening did not exist.

A Bridge Too Far

This time, I am in the Laos village of Ban Don Khun, and at least I have a chair to sit on, although I have no idea what is the Laos expression for “bottom’s up”, so I just smile increasingly vacantly.

The previous day, we took the road from Luang Prabang to Nong Khiaw, or at least we would have if one of the bridges along the route had not been destroyed by recent floods.

Our luxury Tiger Trail air-conditioned minibus grounds to a halt a kilometre before the collapsed bridge in a queue of traffic that has nowhere to go.

Driving to the front we see a void where the final stretch of the bridge used to stand, and unload our bags so we can take the impromptu ferry to the other side, while our vehicle returns to Luang Prabang.

“Tomorrow,” our guide Khit assures us doubtfully. “They say bridge will be repaired tomorrow.”

On the other side we wait for an hour as our new vehicle comes to pick us up, and this time travel with the windows down due to the air conditioning not working. This is real travelling I think to myself, as we pass by the remnants of villages.

The last time I had seen such devastation was in Nepal, when I visited the distraught country after the 2015 Earthquake to interview some of the villagers around Nuwakot struggling to survive. This time the scene of devastation is not caused by any natural disaster but by man’s voracious need for more energy, as the valley through which we are driving will soon become flooded as part of one of several dams constructed along the Nam Ou river. The plan is for Laos to become the battery of Southeast Asia.

En route to Nong Khiaw, we stop at the village of Ban Nayang, where women sit around weaving cotton with traditional looms, before dyeing the finished product with indigo, as the men till in the fields – or are they perhaps drinking Lao-Lao? Every house seems to have its own loom. I buy a scarf for a few dollars.

By the time we reach Nong Khiaw, the sun is beginning to set and men are playing pétanque in the local bus station, so I settle at my guest house the Phaxang Resort where I am the only guest, and enjoy the spectacular views of the tree-lined cliffs descending into the river, a bottle of Beer Lao by my side.

The following day we take the short boat ride along the river to Ban Don Khun village, which is the starting point for our trek to the 100 waterfalls.

This stretch of the river has already been flooded by a completed dam, although farming by the river banks is still precarious, especially when the sluice gates are opened; at least a warning of the impending flood is given.

This area was heavily bombed during the Vietnam War, in the most intensive aerial bombardment in the history of man

Ban Don Khun now has some 33 families. Originally a village peopled by ethnic Lao people, the population has grown as indigenous Khmu families have descended from the hills. There is one Hmong family here too. Khit explains that the government encouraged families to migrate in part to counter the opium trade but also to provide rudimentary education for all. There is a primary school in the village, but to complete their education children study at a boarding school in Nong Khiaw. The three ethnic groups at least appear to live in harmony here, and Khit takes us to a wooden house where a native Lao man has married a Hmong woman.

This area was heavily bombed during the Vietnam War, in the most intensive aerial bombardment in the history of man. As we stroll around the village we see remnants of some of the ordnance deposited here.

The main reason for coming to Don Khun is to make the trek to the 100 Waterfalls and it is here that we walk this morning.

At first, we stroll through verdant fields of rice, with no inkling of what is to follow.

After an hour or so the fields disappear and we hike through forest, along a stream and then eventually up the waterfalls.

There are not 100 Waterfalls, as the name owes much to poetic licence. However, as we walk through cascade after cascade – make sure you take good walking sandals as your feet will get soaked – it is easy to imagine there are.

Half way up our ascent is a pool, and with little encouragement I dive in and paddle up to the cascading water, much in need of refreshment. There is no need to dry off, as the sun will take care of that.

Glorying in the view, eating local food, … and taking a dip in the cool waters, … life just doesn’t get much better than this

Eventually, we come to the final fall, stretching up before us. We stop to take some photographs as I wonder whether we have to climb to the top. Fortunately, our local guide from the village veers off to the right along a path cut into the forest and we safely reach the summit, although two of our gang of four travellers decide to climb up the waterfall instead – after all one of them has climbed Everest.

Glorying in the view, eating local food, including some amazing fresh bamboo with sticky rice, and taking a dip in the cool waters, I reflect that life just doesn’t get much better than this.

By the time we return to the village, where we are to stay the night in a homestay in cabins on the side of the river, the festivities are already in full flow.

One of the villagers has just returned from the capital Vientiane that day, and the Lao-Lao is out to celebrate. One bottle of the locally-produced rice wine contains a small bird in it, another has some bugs. Joining the all-male revellers, I opt for the latter, and start my inauguration with Tan.

Fortunately, we move on to glasses of beer Lao after the fourth shot is concluded, and some fried tilapia appears at the table, making the perfect beer snack.

Journey Back to Luang Prabang

Most travellers visit the village on a day trip from Nong Khiaw, walk to the waterfalls and then take the boat back to town that evening, but that would involve missing out on the community feel of the village, and the ensuing morning-after grogginess.

Our journey back to Luang Prabang passes off without much incident. Amazingly the bridge has been repaired overnight and we return in our air-conditioned bus, stopping off at Nong Khiaw to climb to the Pha Tok cave where villagers took shelter from 1964 to 73 during the day to avoid the American bombardment, and tended their rice fields by night. A solitary trip is enough for me as I stumble over a rock in the dark, I doubt I would have survived nine years trapped here.

Returning to Luang Prabang, I check into the Luang Prabang View with its spectacular vista of the most beautiful city in Southeast Asia and its surrounding hills. The following day I will take a trip to a nearby elephant sanctuary, but for now I am content to watch the sun set behind the hills in this most hospitable and bewitching country.

Tiger Trail run treks throughout Laos. Click here for more details. If you are looking to book hotels direct then try our Hotel Booking Portal.