After travelling around the Cape in Patagonia, Mark Bibby Jackson heads to the Pacific for a meeting with the famous Easter Island statues or moai, and somewhat outstays his welcome. 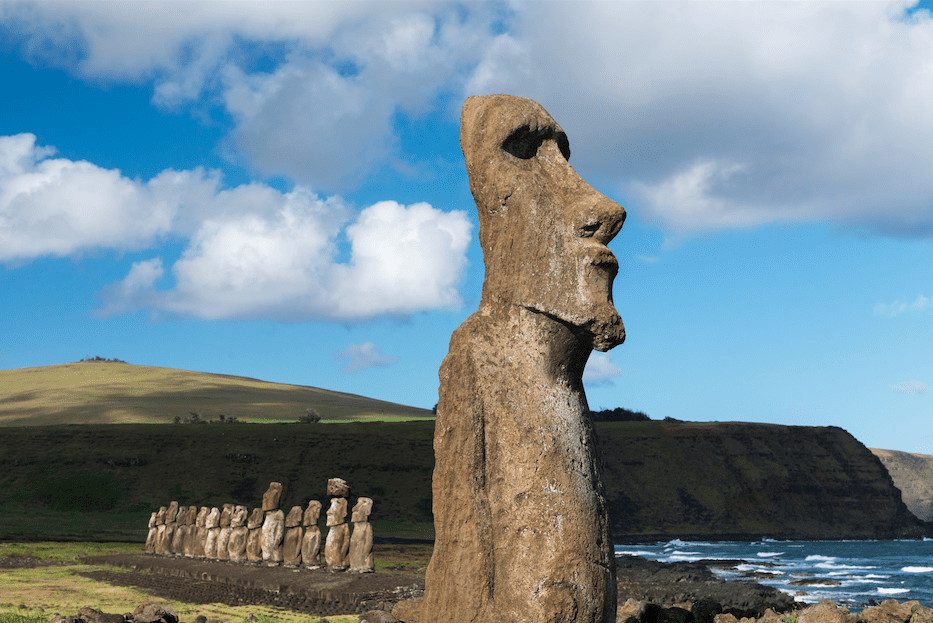 After travelling around the Cape in Patagonia, Mark Bibby Jackson heads to the Pacific for a meeting with the famous Easter Island statues or moai, and somewhat outstays his welcome.

There are times when you feel your fortunes have sunk so low that there is nothing left to do apart from laugh or cry. I chose the former. We were six days into our four-day trip to Easter Island – more of that later – and had decided to hire a car, not for the first time on our extended sojourn on the most isolated outcrop in the world. By we, I mean, Shan, the Chinese woman who was staying at the same guest house; I was literally along for the ride. A pleasant pootle down to one of the island’s beaches, followed by lunch and then back to the capital Hanga Roa taking in the majestic moai of Ahu Tongariki along the way, at least that was our plan. Just another normal day on our Pacific Paradise.

For the next thirty minutes or so, we took it in turns to dig with the conviction of the Count of Monte Cristo

It was after lunch that disaster stuck, or rather we struck disaster. Shan had earlier observed how her rather over-protective parents had discouraged her from driving. I had sympathised, first with her, and then, when her driving skills became apparent, her parents. What could go wrong? Easter Island is basically a one-road island with scant traffic. Unfortunately, the solitary road was narrow with uncompromising rocks on either side. Losing control on the straight, Shan veered off the tarmac and struck one of the rocks, sufficiently hard to puncture a tyre. Now, when was the last time you changed a wheel? Mine was over twenty years ago, and my sheltered driver had never changed one. Still, like riding a bike – a skill I have never mastered – you never forget, right?

Our main problem, I soon discovered, was that the wrench proved inadequate for the job in hand, even when fully extended, thus rendering it impossible to lift the wheel off the ground. So, having reversed the car down a slope to just off the road, I started digging a hole in the rock-strewn soil around the wheel to enable us to remove it.

Where is Easter Island?

Easter Island is one of the most isolated populated islands in the world, 1,289 miles away from Pitcairn Island and over 2,000 miles from the South American continent, bang in the middle of the Pacific Ocean.

For the next thirty minutes or so, we took it in turns to dig with the conviction of the Count of Monte Cristo, in the heat of the afternoon sun. Eventually, a car stopped, and the driver, who was from Barcelona, gave us a hand. Then came another, this time driven by a couple from Chile’s capital Santiago. Now, I was laughing for real, and the wheel quickly changed as the last of our water was consumed. After thanking our saviours, we returned to Hanga Roa. This time, I drove.

My Easter Island excursion had started so smoothly. I had dreamed of travelling to Rapa Nui, as the locals call it, ever since good friends had come back waxing lyrical about the place. When I asked why it was so special, they had replied, “Just go”. So I did.

It is easy to realise the island’s main draw. Some 900 statues are dotted around the island. Most, but not all of them, are by the coast, their backs turned to the ocean. Built between 1100 and 1680, the statues represent chieftains or other important people, and as such have discernible features.

Carved out of volcanic rock in the quarry at Rano Raraku in the heart of the island, the Easter Island statues were transported to their ultimate resting place, then placed on platforms, or ahu, and adorned with their distinctive hats, or pukao. By the end of the nineteenth century most had been toppled, in some internecine rivalry, but many are now upright once more.

It is to the quarry that we head on our first full day, having hired a car in Hanga Roa. There is something surreal about Rano Raraku. Moai emerge from the ground as if they were growing there rather than abandoned as abortive efforts, or perhaps the client had died before completion. Others stand in an apparently finished state glancing towards the Pacific’s waters where their colleagues patiently await them.

Easter Island is so called because Jacob Roggeveen landed on the island on Easter Sunday in 1722. However, the Dutch explorer was not the first visitor to the land. Local legend has it that Easter Island was first discovered by chief Hotu Matu’a and his captain Tu’u ko Iho on a two-canoe expedition from Marae Renga. Along with the Juan Fernández Islands, Easter Island is a special territory of Chile, although there is a movement for independence.

Read about the mystery surrounding the location of the Easter Island statues here.

Perhaps the most impressive Easter Island statues are at Ahu Tongariki, a short drive – well, no drive is long on an island that is a mere 15 miles long and seven miles wide – from Rano Raraku. Here the moai stand proud, their backs turned towards the ocean. My first thought is one of wonderment. There is something about the immensity but also the diversity of these imposing monuments to man’s vanity that almost defies description. We spend a leisurely hour wandering around the site before heading back to the capital as the sun sets.

People speculate why the Easter Island statues face inland rather than out to sea. Early the following morning, returning to Ahu Tongariki, I believe I have stumbled across the answer as the sun rises majestically in the distance. After all, it would hardly have the same dramatic effect if their backs were turned to us. However, this would hardly explain those elsewhere on the island without such a spectacular backdrop.

Rapa Nui Hike and a Day on the Beach

Easter Island is not solely about its moai. In 1995, Unesco designated the whole island a World Heritage Site, and most of it lies within the Rapa Nui National Park. After breakfast, we hike to Ma’unga Terevaka crater through open green fields that once were filled with trees, now sadly felled, perhaps to transport the moai.

A group of tourists pass us on horseback, but we have decided to make the trek on foot, and are not disappointed as we reach the highest point on the island with its spectacular 360-degree view of all around.

As a reward for our exertions, we decide to spend the afternoon resting beside the Pacific. Anakena is a spacious beach with one solitary moai perched on a hill and a row of seven in various states of disrepair, by the golden sands. It also has a couple of beach restaurants that serve us much needed replenishment. As we have coincided our visit with a Chilean national holiday, it comes as no surprise that both beach and sea are full with people.

Nearby, Ovahe is much more secluded. More isolated cove than beach, the route down there involves scrambling over some rocks, but the effort is rewarded with crystal clear waters and perfect seclusion. I need no invitation to enjoy the waves.

The Birdman of Orongo

After a pleasant evening spent dining by the harbour at Hanga Roa, as has become our custom, it is the following day that events start to turn. I decide to head for Orongo, where the Birdman or Tangata manu legend originates. An annual competition, the Birdman was the first to dive from the rocks, swim to the islet of Motu Nui, collect a tern egg, swim back to the cliffs of Rano Kau and then race to Orongo.

Ruins of the village, from where you can see Motu Nui and imagine the contestants splashing their way through the waters, remain. There is also the most magnificent crater nearby, which you are not supposed to walk down to, although try telling Shan that.

Upon our return, we discover the tourists of Hanga Roa in uproar. Apparently, staff at the Chilean airline LATAM, which is the only one to fly here apart from a weekly service from Tahiti, are on strike. All flights are grounded. There is no way off the island, short of sailing like the original Polynesian explorers. We are stranded in our Pacific Paradise.

The following couple of days fluctuate between pantomime and farce, as tourists besiege the governor demanding extra planes – a military one arrives the following day to remove those most in need. Then, they queue in orderly manner outside the Governor’s House to claim a seat on the next flight out. I have sympathy for my fellow holidaymakers, many of whom have Machu Picchu to trek or a berth on an Antarctica cruise they are destined to miss. The following day, the same people queue outside the airline’s office to re-book their flights, while a splinter group deploys to the airport with the same mission.

Read the start of Mark’s adventures through Patagonia Argentina to the Easter Island statues.

There are worse places to be marooned for a few days than Easter Island. Like Bill Murray, I could be stranded in Punxsutawney. I spend my time alternating between lying on the now deserted Anakena beach, taking in the sunrise over Ahu Tongariki once more, and making a brief excursion to Ahu Akivi to see the seven moai that face out to sea rather than inland like the others. Perhaps, they are checking to see when our plane will arrive, though some believe that these Easter Island statues commemorate the Polynesian explorers who first sailed to this island. It is on one of these trips that Shan has her brush with the rock.

Each evening, I return to have dinner at Haku Honu restaurant overlooking the harbour in Hanga Roa, as the sun sets, and wonder whether the following day my plane will arrive. Eventually, it does and my extended Easter Island holiday is brought quite disappointingly to its belated conclusion.

Queuing at the airport for my plane, I bump into the couple from Santiago who had helped us change the tyre. I have no accommodation booked for the Chilean capital as yet, and they offer me a room in their apartment.

That night, I spend at a party discussing English football with one of their nephews while the noise of the streets reaches up to us from down below. It is a long way from Easter Island, but at least here I will not have to change any tyres, I reflect as I prepare for my long flight home, my South American adventure now concluded.

There is far more to Chile than Easter Island statues, read Around Chile in 10 Adventures and Chile: the Hottest Travel Destination.

It helps us if you book your Easter Island hotel via our bookings portal. You pay the same price as booking directly with Agoda, but we take a small commission.

LATAM Airlines has flights from Santiago airport to Easter Island. British Airways flies from London Heathrow to Santiago, via Sao Paulo in Brazil.