Singapore commemorates the 200th anniversary of Sir Stamford Raffles landing in Singapore, which was one of the key turning points in Singapore's 700 year history. Expect 2019 to be filled with events, festivals and innovation to mark the big milestone. 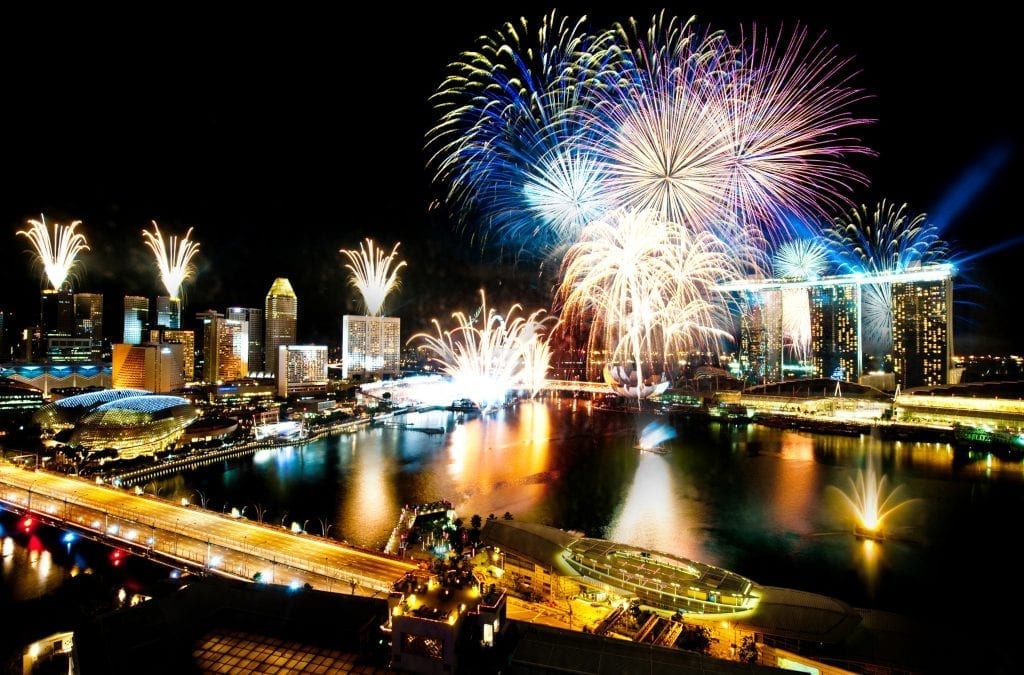 Singapore commemorates the 200th anniversary of Sir Stamford Raffles landing in Singapore, which was one of the key turning points in Singapore’s 700 year history. Expect 2019 to be filled with events, festivals and innovation to mark the big milestone.

Singapore Art Week is an annual celebration of visual arts that transforms the city into a feast for the senses every January. Cultural connoisseurs, street art lovers and the art community across the region all come together in the city-state for a week-long festival with dozens of exhibitions, walking tours, talks, art fairs and after-parties. As the city comes alive with the arts, visitors can look forward to discovering special commissions and exhibitions featuring up-and-coming home-grown artists and curators. i Light Marina Bay is more than just a celebration of sustainability: this light art festival showcases visionary installations by artists from Singapore and across the globe. Held annually since 2010, this visual extravaganza features interactive works set around one of Singapore’s most iconic waterfront destinations – the breath-taking Marina Bay. In 2019, the festival will kick off on 28 January in conjunction with the Singapore Bicentennial commemoration, with over 30 sustainable light art installations complemented by exciting programmes.

Singapore’s Asian Civilisations Museum will be hosting a temporary exhibition as part of the Bicentennial commemorations in 2019. The display will explore the Southeast journey of Sir Stamford Raffles, considered the founder of modern Singapore. The exhibition will present a multi-layered picture of Raffles, and illustrate that his legacy is more complex than often understood. The Asian Civilisations Museum is the only museum in the region devoted to exploring the artistic heritage of Asia, especially the ancestral cultures of Singaporeans. If a single event could capture the essence of Singapore’s unique multicultural personality, it would be the Chingay Parade – an annual marvel of dazzling floats, dancing dragons and stilt walkers. Chingay is the largest street performance and float parade in Asia, bringing together people and performances from across the spectrum of Singaporean culture: celebrated by Chinese, Malays, Indians and Eurasians alike. From the original F1 Pit Building to the heartlands of the country, this street extravaganza epitomises the dynamism of Singapore’s vibrant and multicultural society. Chingay Parade 2019 will open with three large scale paintings tracing the “Past, Present and Future of Singapore” to commemorate Singapore’ Bicentennial.

Celebrated annually, the Dragon Boat Festival commemorates the story of Qu Yuan, an incorruptible minister of state during the Warring States era of China, who threw himself into the river due to political intrigue. Today, the festival is an exciting water sport event that sees 22-member crews from around the world rowing to the beat of the drums and competing in an exciting competition.

The races take part at Bedok Reservoir, Kallang River and DBS Marina Regatta. Visitors who witness the traditional boat racing festival will also see the people throwing rice dumplings wrapped in banana leaves or silk into the water, an act to appease the river gods – and can only be witnessed in Singapore.

The Singapore Night Festival is the largest outdoor performing arts festival held in the heart of the Bras Basah / Bugis heritage district, turning the area into a midsummer’s celebration of sorts. The signature highlight of the festival is the interactive light installations that turn the facades of the Singapore Art Museum and the National Museum of Singapore into ephemeral works of wonder. Night owls enjoy the many events held late into the night at cultural institutions including the National Museum of Singapore, the Peranakan Museum, Singapore Philatelic Museum, Singapore Art Museum, The Substation and more.