Roger Hermiston and Eileen Wise fill their boots on local history while staying and dining at The Swan at Lavenham in Suffolk, as well as enjoying the most blissful spa treatment. 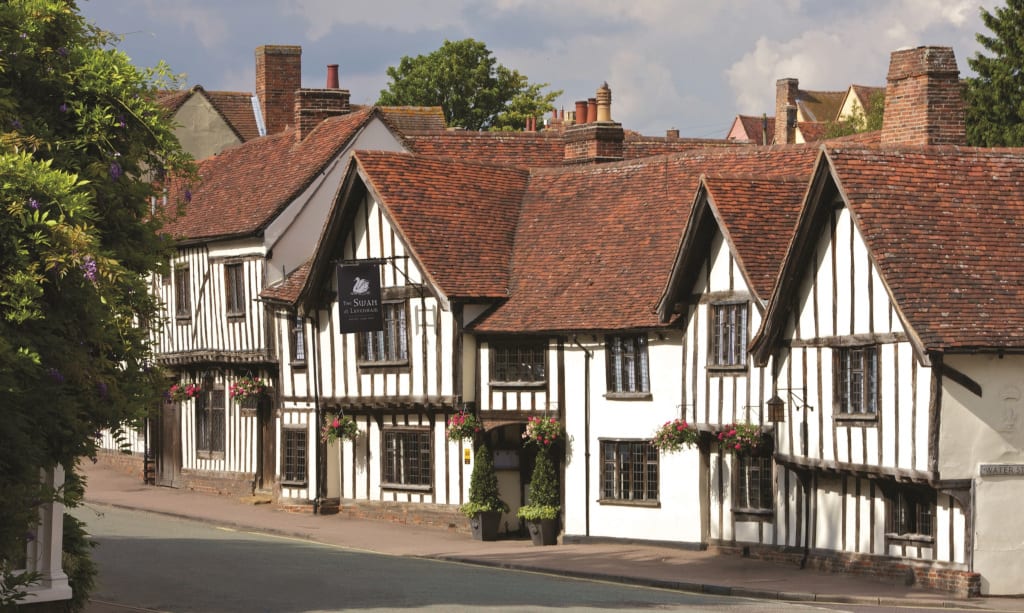 Roger Hermiston and Eileen Wise fill their boots on local history while staying and dining at The Swan at Lavenham in Suffolk, as well as enjoying the most blissful spa treatment.

The Swan at Lavenham is alive with history. Pausing outside its ancient front door, you can almost hear the clattering of the hooves on the cobbles and the welcoming words of the innkeeper greeting finely-dressed guests as a coach draws up on its journey to London

That would have been in the 1830s, when the hotel had stabling for fifty horses and a flourishing posting trade. Yet The Swan’s rich heritage goes back much further, to medieval times, when Lavenham was one of the richest towns in the land off the back of the booming wool trade.

Step inside that broad oak entrance and you are immediately transported to the 15th century, weaving your way through the sprawling half-timbered complex of buildings, a winding maze of low-slung, oak-beamed rooms with inglenook fireplaces and cosy nooks. In the centrepiece of the house, the Gallery restaurant, fine dining is enjoyed in a magnificent high-timbered room with a handsome Minstrels’ Gallery.

Yet it is The Swan’s more modern history that arguably has the most poignancy. In the 1940s the ‘Old Bar’, later renamed the ‘Airmen’s Bar’, was a popular destination for British and American servicemen – especially air force personnel, with a clutch of airfields (including RAF Lavenham, operational between March 1944 and August 1945) nearby.

Pilots and gunners from the US Army Air Force 487th Bombardment Group would leave their Nissen huts at the Lavenham airfield, walk across the fields in their flying boots (swapping them for ‘civvies’ at the side of the road), then head into The Swan for a lively evening of drinking and dancing with the local women.

On a particularly raucous night, the Americans would compete with their British counterparts in a unique drinking game – to see who could be the quickest to down three and half pints of ale from a glass boot.

The results of the famed ‘Boot Record’ are among the extensive graffiti daubed on the walls of the ‘Airmen’s Bar’, alongside the names (with their home towns added) of many of the visiting American servicemen. Everyone in this wartime community, it seems, wanted to leave their mark on a memorable evening at The Swan.

None more so than Pilot Officer W H Culling, from No 107 Bomber Squadron at RAF Wattisham. On 5 July, 1940, the wall graffiti tells us, Culling set a new record by downing the three-and-a-half pints in just 59 seconds. Eight days later, he returned to The Swan and lowered his time to an astonishing 40 seconds – a time, it appears, that has never been bettered.

A swift piece of detective work and we know a little bit more about the prolific drinking Culling – even if (not yet) the end of his story. Five months later, on December 10, he took off at night from RAF Wattisham in his Blenheim IV, along with 61 other bombers, to strike at German ports and lay mines in the River Gronde.

But Culling and his colleagues – Warrant Officer Arnold Brown and Gunner Sgt E T Perry – were shot down, captured, and imprisoned in Luftwaffe-run camps. We know young Culling was ultimately incarcerated in the most famous camp of them all – Stalag Luft Sagan (III), which would spawn The Great Escape. But we don’t know his ultimate fate.

A Tapestry of English History

For all its colourful past, The Swan isn’t preserved in aspic. Its success derives from skillfully combining the ancient and the modern, projecting all the contemporary amenities onto a vast canvas of great English history.

So the 45 rooms, ranging from the comfortable Cygnet bedrooms to the spacious Constable suites (named after local villages), all have – to differing degrees – the timber beams, leaded windows and medieval wall hangings. But they also contain all the luxuries one would expect from a four-star Pride of Britain hotel, with rich furnishings and fabrics, extremely restful armchairs and large beds, and elegant bathrooms with waterfall showers and deep baths.

Sadly there was no-one playing the grand piano on the Minstrels’ Gallery on the evening we were there, but the experience of dining in the atmospheric Gallery restaurant – which has a Two Star accolade from the AA – was nonetheless a memorable one.

This imposing room looks and feels authentic Tudor, but it was actually built by Trust House Forte in 1965, using 400 tons of English oak. Head Chef Justin Kett turns all the abundance of the surrounding Suffolk countryside to his advantage, using fresh fruit and vegetables from local farms and meat and game direct from the splendid Lavenham Butchers across the road.

The result is an exciting, innovative five-course gastronomic experience – down to one of them, unusually, being served in glass jars. The menu on the night of our visit included tasty Suffolk asparagus with hollandaise sauce and a poached duck egg for starters, followed by plaice accompanied by samphire, pine nuts and shrimps. A succulent duck with garlic fondant, rhubarb and vegetables was the main.

We knew from previous experience that three-course lunches at The Swan are also very enjoyable – and reasonably priced. And if you fancy a more informal eating experience, the Brasserie across the corridor serves a more casual menu such as chicken Kiev, fish and chips, burgers and the like.

The Swan at Lavenham Spa

It was skilled Flemish weavers, emigrating to East Anglia in the 14th century, who inspired Lavenham’s great involvement with wool which ultimately led to the town’s famous blue cloth. So when The Swan decided to enter the spa business three years ago, “Weavers’ House” was a clever and apposite name for the hotel’s new enterprise.

Next door on the High Street, Weavers’ House with its bleached wood floors and light, bright interiors is a nice contrast to the dark oak beams of the main house. Friendly, informative staff greet you; a steam room, sauna and outdoor vitality pool await before your treatment – the latter, in the courtyard of the spa, was wonderfully soothing for aching muscles.

If you fancy a break at The Swan, why not try the ‘Ultimate Romance Package’ available throughout all of February?

Body and mind were then perfectly relaxed in the course of a quite superb Drift Away hour-long full body massage. Never has the title of a treatment seemed so appropriate. Afterwards, a pot of tea and a macaroon in the spa’s Quiet Room helped us slowly emerge from our reverie.

Spas seem to be de rigueur in luxury hotels nowadays. But Weavers’ House, despite being a new kid on the block, already possesses the comfort and the style to rank it among the best.

The Swan at Lavenham has endeavoured to keep up high standards for seven centuries. The evidence is very much that it continues to succeed in that quest.

The Swan at Lavenham Photo Gallery

The Swan at Lavenham Deals

To book a stay at the Swan at Lavenham Hotel and Spa, or treatments in Weavers’ House Spa call 01787 247477 or visit the hotel’s website. Rooms start from £185 per night for two sharing including a full Suffolk breakfast. Dinner from the a la carte menu is from £40 per person for three courses. Overnight guests have a complimentary two-hour session with use of the facilities in Weavers’ House Spa including the sauna, steam room, outdoor vitality pool and relaxation lounge. The Drift Away and Work it Out massages are £74 for 60 minutes.