Mark Bibby Jackson samples the fare at Plate Restaurant in London’s Shoreditch to see how inclusive Arnaud Stevens’ restaurant is. 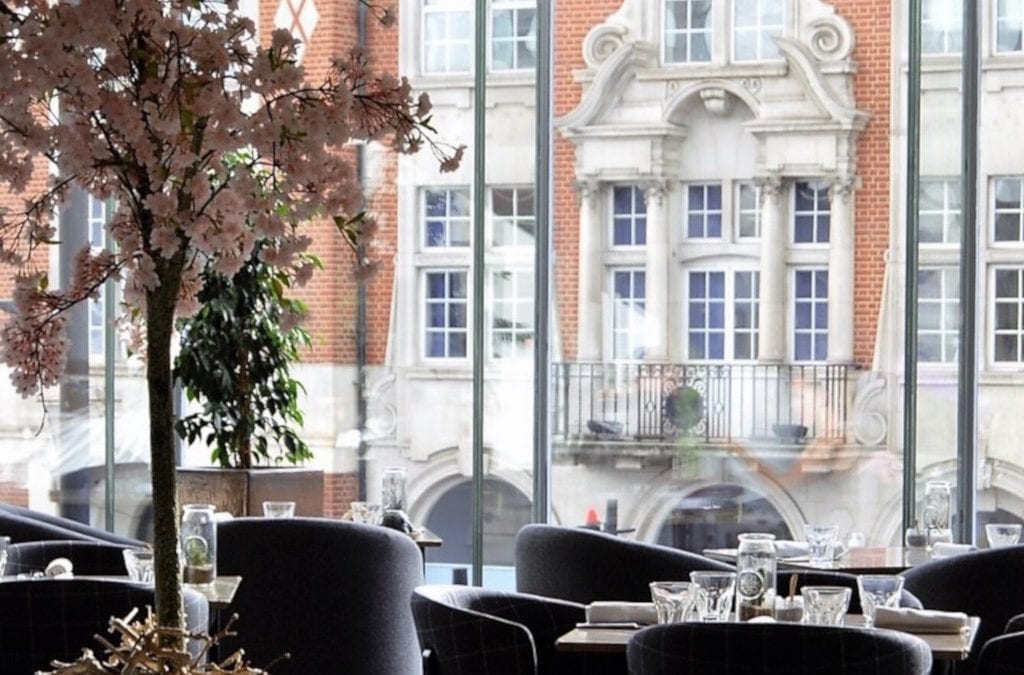 Mark Bibby Jackson samples the fare at Plate Restaurant in London’s Shoreditch to see how inclusive Arnaud Stevens’ restaurant is.

On a recent Facebook debate a fellow travel journalist asked for people’s views on whether she should keep to her vegetarian principles on press trips in order to be less bother. While all responded that she should, I added that part of a press trip ­– which is when journalists are hosted by a hotel or tourism department to experience a destination – is to see how suitable the place is for all travellers.

With this debate still firmly entrenched in my mind, I, a pescatarian, journeyed with my gluten-intolerant friend to Plate restaurant in London’s Shoreditch to try the new seasonal menu. As I climbed up the stairs to the gleaming first-floor restaurant space my first question was satisfactorily answered – there was a lift to allow access for all potential diners.

The meat, the whole meat and plenty but the meat

Researching Arnaud Stevens’ stylish, contemporary restaurant I was slightly concerned to read the owner and creative head chef places a priority on the “finest quality meat”, which come from Sir Edward Dashwood’s West Wycombe Estate in Buckinghamshire, some 40 miles away. Although I appreciate the chef’s devotion to provenance, and ethical sustainable sourcing of meat, I wondered whether the menu would be too meaty for my tastes.

I had no need to be concerned, for in truth the days of salmon fillet or mushroom risotto are long gone.

To start, I could choose from a beetroot salad, crushed avocado with poached egg or mushroom soup. One of the many myths of vegetarianism, or pescatarianism, is the allure of the aroma of fried bacon. Truthfully, if I never were to see, smell or taste another rasher I would not miss it. However, Scotch eggs are another matter altogether. In my youth, I would devour them with a vigour that almost matched my brother’s wanton destruction of pork pies. So, I was delighted and intrigued to see the Chapel & Swan smoked salmon Scotch egg with wasabi mayonnaise listed.

While not quite transporting me back to my youth, the dish was most satisfying with the smoked salmon flavour most distinct, and if anything improving on the traditional pork. The sauce was equally good with the wasabi sufficient to please without upstaging the main event. My companion after much helpful interaction with the waiting staff as to what was and what was not gluten-free, opted for the beetroot salad. Well presented with a crunchy and tangy dressing, judging by the alacrity that it disappeared, it most certainly hit the spot.

Stevens had previously worked alongside Gordon Ramsay, Pierre Koffmann and Tom Aitken before establishing Plate, so clearly he knows a thing or two about which ingredients to pair with which.

This was proved by his next dish a pan-fried Stone bass with smoked celeriac and mussel sauce that partnered some braised chicory with hazelnuts on top. As a who’s who of my favourite ingredients, the dish was an instant hit. The fish flaked appropriately and the chicory had a sharpness that enlivened the dish. However, the stand out was the josper peppered leeks baked gloriously in their skins I chose as a side. If there is any dish I could take on Desert Island Discs with me then this would be the one – I will never be able to look an au gratin squarely in the face again.

The main test was on the other side of the table as my companion played it safe and chose the rib-eye steak served in a peppercorn sauce. Satisfaction was writ all over his face as Sir Edward Dashwood’s finest clearly cut the mustard. It was tender, succulent, cooked to perfection and most definitely gluten-free, I’m assured. All this was washed down with a most quaffable South African red, and finished with a shared plate of carefully chosen cheeses.

Plate also has a cocktail bar where you can watch the resident mixologist mix up a treat. Service was quite exceptional, as was the care taken to ensure that our dietary requirements were met. Our table overlooked City Road with views of the spectacular Victorian façade of Moorfields hospital, a gem within this part of the City.

Stephens lists his influences as Pierre Koffmann Gary Rhodes, Gordon Ramsay, Jason Atherton and Richard Corrigan, and credits his team for creating an environment that is “warm, earthy and organic” environment. From this tasting, it’s a claim that is justified.