Mark Bibby Jackson returns to the scene of one of his previous crimes to spend a night in St Ermin’s Hotel in London’s Westminster to discover a building with a surprisingly colourful history. 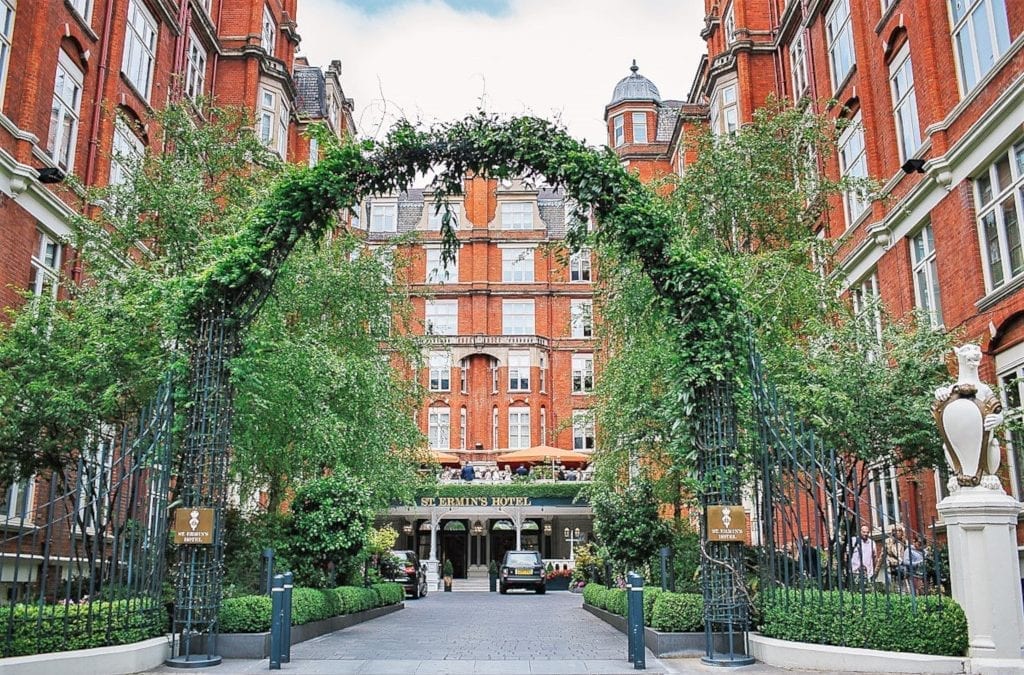 Mark Bibby Jackson returns to the scene of one of his previous crimes to spend a night in St Ermin’s Hotel in London’s Westminster to discover a building with a surprisingly colourful history.

In a previous existence I used to carry out consultation on major railway projects. My office was adjacent to the former New Scotland Yard building. I was also the designated fire officer. One day, a police officer walked into our office, and asked to speak to me – well, the fire officer at any rate.

He explained there was a car parked illegally next to our building; it had Northern Ireland number plates. This was during the Troubles, when the Good Friday Agreement was the pipe dream it might yet become post-Brexit, and illegally parked cars outside the epicentre of London’s police constabulary were to be taken seriously, especially when directly below my second floor window.

Little did I know that a quarter of a century later, I was to check into the same hotel, and this time fortunately not via the kitchens

“Should we evacuate?” I asked the officer, who simply repeated the facts to me, although indicating that the risk of our multiple fatalities was slight.

Insufficiently reassured, I led our team out of the building and through the kitchens of the adjoining hotel and on to the street. We spent most of the afternoon most secure in a nearby wine bar, until closing time when our boss became inadvertently locked in – although that may well have been a separate incident.

Little did I know that a quarter of a century later, I was to check into the same hotel, and this time fortunately not via the kitchens.

St Ermin’s: a Hotel with a History

The original St Ermin’s Mansions was built in 1889 on the site of a 15th century chapel named after St Ermin. Swish serviced flats, which were much in vogue towards the end of the nineteenth century, they were built around the still existing central courtyard in Queen Anne style red brick. The mansion block afforded security and seclusion right in the heart of London with St James’ Park and Westminster a short walk away.

The first thing which strikes as you enter St Ermin’s is the sense of the dramatic, which is hardly surprising as the lobby was designed by J P Briggs, a Victorian theatre designer, who helped transform the block into a hotel in 1899.

The white plasterwork echoes Queen Victoria’s beloved Durbar Room in Osborne House on the Isle of Wight, albeit without the spectacular peacock, but with a sweeping staircase that leads up to the first floor area where afternoon tea is served.

The lobby contains artefacts that demonstrate the hotel’s close association with the corridors of power. A disused Division Bell, which used to inform MPs of an impending vote in Parliament, was unveiled by Nicholas Soames on 17 May 2011. The Tory MP is the grandson of Winston Churchill, whose photograph can also be discovered in the lobby area. Indeed, during World War II, a corridor of the hotel was handed over to the SOE (Special Operations Executive) that led covert espionage operations behind enemy lines – more Foyles War than Inglorious Basterds. There are even rumours of a tunnel running from beneath the lobby’s grand staircase to the House of Commons.

The check in was seamless and the room both well-appointed and commodious. Two Queen Size beds proved most inviting, and with the day bed in the window, it allowed plenty of space for a family, as was its intent. The room also had pleasant views onto the courtyard, ideal for people spotting.

After a walk around St James’ Park to say hello to the pelicans, we freshened up in the room before dinner at the hotel’s Caxton Grill.

I started with a delicate sea bream carpaccio served with a chilli and citrus sauce that gave the wafer thin fish an extra zest, while my similarly pescatarian dinner companion chose the burrata with blood orange and fennel salad. The creamy cheese simply oozed out onto the plate and was moorishly wolfed down within seconds.

This we followed with an almond crusted halibut recommended by the waiter and seconded by the man sitting on the adjoining table that was delicate enough to eat with fork alone. Both recommendation and seconding were justified. The only slight blemish was the single raviolo of mushroom served in a leek, truffle and hazelnut sauce, which was tasty but solitary – the raviolo being literal rather than a typographical error.

However, this was more than compensated for by the chocolate cremeux, that came with a delightful nutty, burned caramel sauce and a towering sugar shard that put the real Shard on the other side of the Thames in the shade. All was washed down with a most acceptable house red.

We then barely resisted the temptation of the inviting bar before adjoining for the night.

St Ermin’s Hotel is part of the Autograph Collection, Marriott Group, and perhaps is best summed up by my American companion who said – “it doesn’t feel like a Marriott”; much more like an intimate hotel with a distinct sense of history.