Concluding their Malaysia travel adventures, Roger Hermiston and Eileen Wise leave the tranquil Cameron Highlands to head to the island of Pangkor Laut. 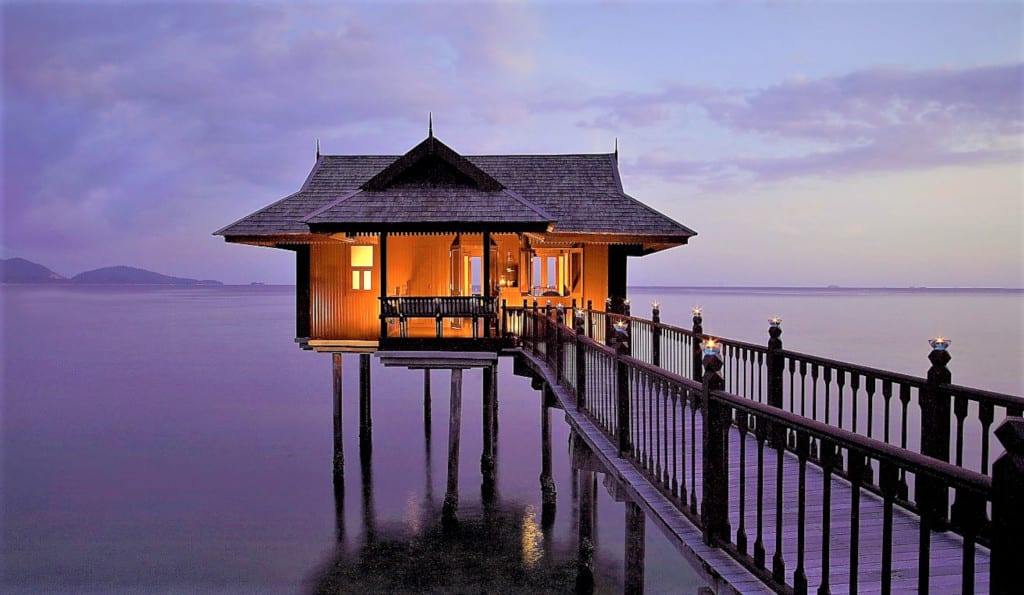 Concluding their Malaysia travel adventures, Roger Hermiston and Eileen Wise leave the tranquil Cameron Highlands to head to the island of Pangkor Laut.

For the final few days of our trip we left the cool uplands and travelled westwards to the coast, where we took a motorboat from the port of Lumut out to the gorgeous private tropical island of Pangkor Laut in the Malucca Straits.

The rich and famous have flocked here – Luciano Pavarotti loved it so much he made it a regular holiday home – there is a hilltop suite named after him –, and Chapman’s Bar on picture perfect Emerald Bay proudly displays photographs of Helen Mirren supervising a barbecue.

If you wanted complete peace and quiet with a group of family or friends you could hire one of the exclusive eight private estates at the top of the island, which have separate living and dining pavilions. But most guests take a hill or beach villa close to the resort’s centre, or sea or spa villas situated off a spectacular wooden walkway on stilts in the sea.

We spent a couple of nights in a luxurious hill villa, highlights of which were an enormous wide stone bathtub and a private balcony with sensational views over the Malucca Straits, before we transferred to a villa in the more secluded Spa Village, which necessitated a half a mile stroll along the walkway from the reception area.

But what a walk it was across the edge of the sea.

Malaysia has 20% of the world’s animal species, and over 600 species of birds. On our amble to breakfast we caught a flavour of the wildlife feast this country provides. We delighted in watching the activity at the nesting-boxes of the magnificent oriental pied hornbill, the father carefully passing slivers of fruit through the narrow entrance to the expectant mother. And when we reached our breakfast table, another hornbill or two, cackling merrily with a ‘kek-kek-kek-kek’ sound, would be poised on a nearby tree to swoop down for any leftover scraps.

This exotic bird with its 19-centimetre bill and accompanying casque (helmet) seems like something out of a prehistoric era. Equally amazing is the bat species on Pangkor Laut – one of the largest in the world. Called the Flying Fox, they congregate in startling numbers – over 300 – in one particular stone sea-almond tree, spending much of the day hanging down apparently resting, before heading off in raucous groups to look for food.

Then there was the troop of light brown macaque monkeys, elusive for much of the time but spotted swinging insouciantly from the trees to pick up food left by the hotel staff. A regular sight on our morning walk was the huge monitor lizard, basking in the sun on his favourite rock outside Uncle Lim’s Chinese restaurant.

The efforts to conserve these species and many more, a key objective of this eco-friendly resort, was outlined to us by our engaging and informative guide Aris on a jungle walk over to Emerald Bay. We looked in vain for the (destructive) wild boar he assured us lived there, came upon giant spiders spinning their webs in trees, and admired the work the termites put in to create their enormous mounds.

Now our destination on the walk, Emerald Bay, was the final setting for one of the greatest stories of World War 2. You might say, to paraphrase Rupert Brooke, that it is a corner of a foreign field that is forever England. For it was here that the British special forces officer ‘Freddy’ Spencer Chapman made his dramatic exit from the battlefield.

Thirty-eight-year-old Colonel Chapman had spent a gruelling 1,226 days behind enemy lines in the jungles of Malaya, harrying the occupying Japanese in alliance with native Communist guerrillas. So successful had he been in blowing up bridges, sabotaging their supply lines and killing them, that the Japanese were convinced they were fighting a whole unit – not just one resourceful, utterly courageous commando and his allies.

Chapman was shot three times, and was often desperately ill with malaria, dysentery and beriberi – he was in a coma for 17 days – while his companions were captured and beheaded. But trusting to the principle that the ‘jungle is neutral’, he managed to survive in this most testing of climates and eventually make it to Pangkor Laut island by 12th May 1945 with Richard Brooke, his companion from Special Force 136, who had managed to link up with him in the last few weeks.

With their radio mended, they managed to summon the help of a British submarine in the area, HMS Statesman. Early on the morning of the 13th the two men, with their heavy packs strapped to their back, swam a kilometre out of Emerald Bay, and Chapman’s Great Escape was complete.

Today a plaque on Emerald Bay beach commemorates Freddy’s exploits, and the bar is named after him. There is also a yearly endurance race evoking his spirit, which involves a 3.8km road run around the island, a 2.4km dash through the rainforest, and then the one kilometre swim in Emerald Bay.

Back at our new room above the sea at the Spa Village, and it was time to wander along the walkway for some serious pampering. Even the pre-treatment ritual at the Spa Village was something to behold – an experience drawing on bathing and washing traditions from all over Asia. It started with a soothing footbath and invigorating Chinese Foot pounding with a wooden hammer, followed by a dip in the traditional Malay circulating bath, then a Japanese-style cleansing with a goshi-goshi cloth, and finally a gentle exfoliating scrub wash named the Shanghai Scrub.

Eileen moved on to the Spa Village’s exquisite Campur-Campur body massage, a mix of Malay and Thai techniques using touch, tone and aromatherapy, with lemongrass and pandan leaves pressed along the body using a traditional heated pouch. For all these superbly relaxing treatments we were in the magical hands of Latchimi and Dewi – but indeed all the staff at the Spa Village were most welcoming.

It only remained for Eileen to cook lunch – yes, you’ve read that correctly. She enrolled on the resort’s Kitchen Experience course, taking a boat out with the chef to the adjoining, larger island of Pangkor. There she visited a fishery, seafood market, noodle maker and floating fish farm – the latter guarded by a group of very amiable dogs.

Returning with all the ingredients, and with a swift induction into the art of Southeast Asian cooking, Eileen prepared a splendid dish of sea bass in coconut sauce. There are some excellent restaurants in the Pangkor Laut resort, but this homemade dish was as tasty as anything we consumed on the whole holiday.

On our trip back to KL airport and the journey home, we reflected on our trip.

In the novel Time for a Tiger, Anthony Burgess’s comic masterpiece set in 1950s Malaya at the time of the ‘Emergency’ and the dying days of British colonialism, schoolmaster Victor Crabbe bemoans the ‘prickly heat, the mosquitoes, the terrorists, the fools at the bar of the club’.

But, he declares, ‘I love this country. I feel protective towards it. Sometimes just before dawn breaks, I feel that somehow I enclose it, contain it. I feel that it needs me’. It is easy to feel the same way that Crabbe did about this dazzling, compelling land.

For more information about the Pangkor Laut Resort, click here. Rooms start from £270.