A Night in London Across the Ages

Travel Articles > Experiences > Gastronomy > A Night in London Across the Ages 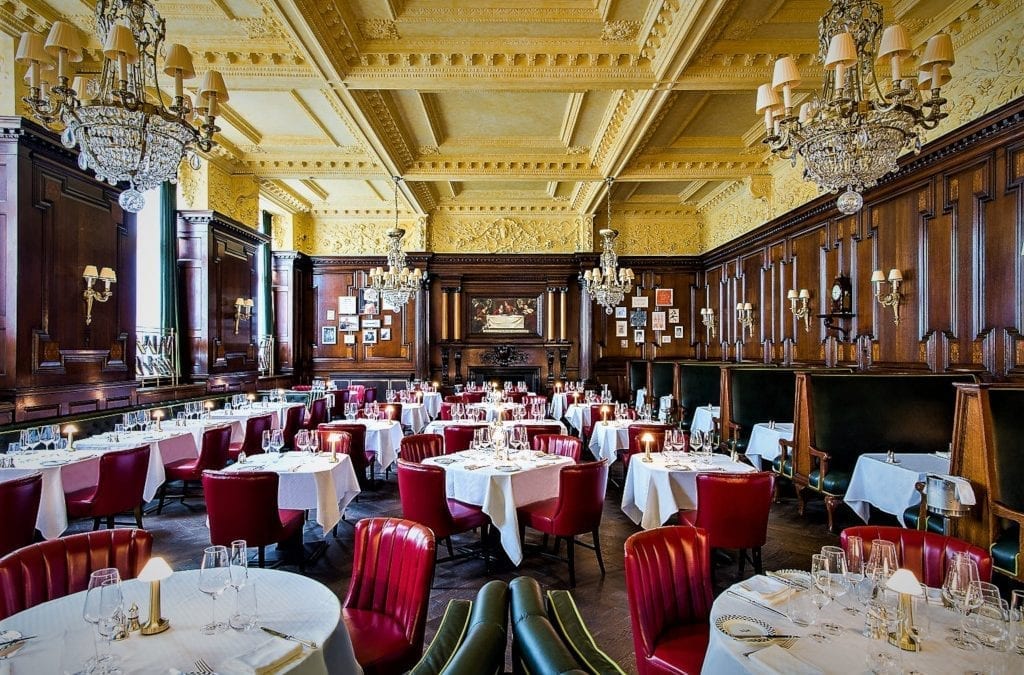 A Night in London Across the Ages

Roger Hermiston and Eileen Wise spend a night in London taking in Covent Garden and the West End before dining at Simpson’s in the Strand.

Despite living the life of happy provincials for a decade or so in the Suffolk countryside, the lure of our old stamping ground, London, proves irresistible from time to time. It feels good to dip our toes briefly again into the fast-moving waters of metropolitan, cosmopolitan existence.

For our latest excursion, we planned a night in London spanning three centuries – a food venue rooted in the early 19th century, a theatrical gem very much of the mid 20th century, and lodgings of the here and now.

Starting back to front – we landed at our 21st century accommodation, The Nadler Covent Garden, situated just off The Strand. This modish boutique hotel is the latest in the Nadler Hotels portfolio, following similar chic establishments in Soho, Victoria, Kensington and Liverpool.

Perfectly situated for the pleasures of the West End, the hotel has an array of superb shops, restaurants and theatres falling over each other to greet you. A five-minute stroll eastwards takes you to the National Gallery and the National Portrait Gallery, while the Royal Opera House is a six-minute trek to the north.

The young, enthusiastic and knowledgeable front desk staff (‘ambassadors’) at the hotel happily advise on the best shops and sights. An even more vital part of their job is to point you in the direction of nearby cafés and restaurants, as it doesn’t do a breakfast or evening meal – although your room has a ‘mini kitchen’, complete with fridge, microwave, Nespresso machine and kettle.

After our engaging ‘ambassador’ Pablo had run through a list of lunchtime options, we acted on one of his top tips and headed up the road to Sticks ‘N’ Sushi restaurant on Henrietta Street.

This Copenhagen-based chain now boasts eight venues in London. We slavered over the beautifully-produced menu before opting for the appropriately named ‘Perfect Day’, a compilation of tataki, nigiri, maki, kani karokke and edamame, together with sticks of asparagus and bacon, salmon and teriyaki, and chicken meatballs – all washed down with a jug of warm sake.

One of the delights of Covent Garden is the street artistry, and on leaving Sticks ‘N’ Sushi we were beguiled by the performance of Silver Man, an individual dressed in a spray-painted labourer’s jacket, trousers and hat, and carrying a spade which he used to balance himself and then seemingly levitate, above the ground. It was a hypnotic display which was clearly facilitated by a hidden prop – but also required astonishing strength in the upper body and arms.

Back at the hotel, we had time to relax in our comfortable room on the fifth floor. It was a room with a view, too, because from the corner of our balcony, beyond the houses on the far side of The Strand, we could see a section of the Eye revolving slowly.

Our bedroom, in stylish, muted colours, was spacious and would prove surprisingly quiet at night, perhaps benefiting from triple glazing. It featured furniture specially hand carved at a West London manufacturer, along with fabrics made from natural fibres on the Scottish island of Bute. One of the many neat extra touches was a special edition Paul Smith Anglepoise lamp.

The superior bathroom, with flecked grey marble walls and stainless-steel fittings, featured a splendid, awakening rainfall shower. Suitably refreshed, it was then out into the hubbub of a London night and off to our first evening engagement just a five-minute stroll away.

Arriving at the Noel Coward Theatre on St Martin’s Lane, we were transported back into the heart of the 20th century with a new production of the gripping melodrama All About Eve.

It was Anderson’s despairing performance as the diva on the slide, backed up impressively by James as the willing, cunning ingenue, that live in the memory

Originally a short story by Mary Orr, this tale of fame and thrusting ambition on Broadway was turned into an Oscar-winning film in 1950 by Joseph L Mankiewicz, starring Bette Davis as Margo Channing, the domineering yet ultimately vulnerable, fading star of the stage.

This new version of the play, directed by Ivo van Hove, was spellbinding, not least because of superb performances from chief protagonists Gillian Anderson (Margo) and Lily James (Eve). Mankiewicz’s film benefited from one of the most exceptional and literate scripts ever written, with many of the great lines going to the waspish, influential film critic Addison de Witt, played excellently on this occasion by Stanley Townsend.

The play was enhanced by a dreamy, instrumental soundtrack from singer-songwriter PJ Harvey, and technological wizardry. Roving camera operators filmed events happening in other rooms to the main stage, before zooming in on the performers. These were projected onto screens from which we, at the back of the stalls, greatly benefited.

But for all the modern tricks and artifice, it was Anderson’s despairing performance as the diva on the slide, backed up impressively by James as the willing, cunning ingenue, that live in the memory.

Simpson’s in the Strand

Then, it was out into the spring night, for a ten-minute walk to our late supper at Simpson’s in the Strand. We were following in the footsteps of Sherlock Holmes and Dr Watson for whom a night out at the theatre then dinner at Simpson’s was a regular relaxation after their duels with the likes of Professor Moriarty.

Dating back to 1828, Simpson’s started life as a modest smoking room and coffee house. The reputation for the quality of its roast meats only began to be established in the 1850s – when it also became one of the capital’s, nay the world’s, great chess venues.

Simpson’s owner (and neighbour) The Savoy gave it a major refurbishment a couple of years ago, freshening up the menu and the surrounds. The famous carving trolleys remain, but the rows of wooden chairs have been replaced by comfortable red leather seating, more akin to an upmarket pub than a discreet gentleman’s club. The oak walls and vast oil paintings of the past have stayed, while the new emerald green banquettes and stained-glass window work well below the original cornicing and columns.

Where there is an iconic London restaurant, there is usually Winston Churchill. The Great Man loved to dine down the road in the Savoy Grill with his cabinet in tow, but he also regularly frequented Simpson’s, favouring the table by the left of the fireplace from where he could people watch. Fascinating photographs of Winston are on the wall above his old table, while to the side of it is a brilliant cartoon by Zoom Rackman, the young artist-in-residence at Simpson’s, depicting Churchill, Disraeli and Gladstone at the famous table about to be carved their beef.

Eileen, a pescatarian, opted for the seared Loch Duart salmon from master cook Adrian Martin’s Bill of Fare. But Roger just had to have the trolley wheeled out for the 28-day dry-aged roast rib of Scottish beef. from the Duke of Buccleuch’s estate in Inverurie. The beef was accompanied by the largest Yorkshire pudding we had ever seen, and a succulent heap of dripping roast potatoes, plus Savoy cabbage.

Elsewhere, the menu features many of the old classics, just a little reinvented, such as the steak and kidney pie now made individually in traditional pudding moulds and steamed in the oven. Lobster thermidor, braised beef in Guinness, braised Herdwick lamb shoulder and loin all remain for the delectation of regulars – as, of course, do Beef Wellington and Lord Woolton (whipped potato, peas and parsley sauce).

The revamped Simpson’s has successfully retained the best of the old, while opening its curtains to allow in a breath of fresh air. The staff are friendly and attentive, and the whole dining experience was extremely pleasurable.

With minds fully stretched and stomachs straining, we bade farewell to the capital the following morning and made our way home to a frugal supper and a quieter existence.

Visit Simpson’s in The Strand

A Night in London Photo Gallery

A Night in London

To book a night at Nadler Covent Garden or anywhere else in London, try our hotel comparison engine by entering your dates below – we search hundreds of websites so you can find the best deals.

Things to Do in Verona on Foot