On a cricket-inspired trip to Hampshire and the docks of Portsmouth, Mark Bibby Jackson reminisces at the Hilton at The Ageas Bowl on cricketing feats past. 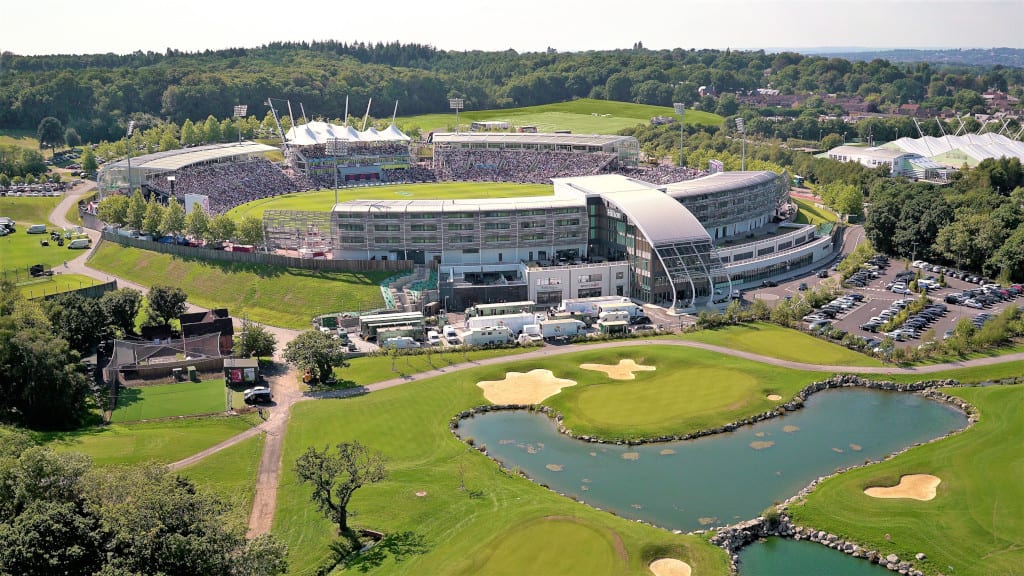 On a cricket-inspired trip to Hampshire and the docks of Portsmouth, Mark Bibby Jackson reminisces at the Hilton at The Ageas Bowl on cricketing feats past.

I have to confess it was not the first time I had dozed off at a cricket ground, but never before had my repose been in such luxurious surroundings. I rested my head on the softest of pillows as the enveloping mattress encouraged my slumber, just as England were closing in on victory against Pakistan.

Only this time the cricket was being played out on the television in my room at the Hilton at The Ageas Bowl, while the covers outside were protecting the strip of land that would prove the surface for the one day international between the two proud cricketing nations the following weekend.

You don’t have to be a cricketing fan to enjoy a stay at the Hilton at The Ageas Bowl, with its Boundary Lakes golf course, eforea spa and Beefy’s bar and restaurant, but it helps.

The terrace from my room overlooked the square. If a game were being played the glare from my sunglasses might have put off the batsman at the crease, if the sun were out. Instead, I was able to enjoy a glass of complimentary red wine from the Executive Lounge, while awaiting the appropriate time to take dinner.

As I youth I had revelled in the heroics of the solitary man brave enough to take on the Aussies. That innings at Headingley is forever etched in my memory, as was Botham’s five-wicket hall at Edgbaston and the final Centurion act of Old Trafford. But even Beefy was unable to stoke the fires of England and lift aloft the cricketing World Cup, something his modern day equivalent is hoping to achieve this year, so long as he avoids the night clubs of Bristol.

And it is to the restaurant named after the hero of 1981, to which I head after my nap.

The wines have been specifically selected by Sir Ian, who regular devotees of Sky Sports Cricket will know is partial to an occasional drop of vino, along with his long-time friend and co-hero of Headingley Bob Willis, and winemaker Geoff Merrill.

Neither it, nor the food, created from local ingredients wherever possible and with the minimum of fuss – just like Beefy’s approach to cricket – disappoints. The lightest of prawn and crayfish salads was followed by a locally-caught plaice, followed by a totally self-indulgent chocolate délice. All washed down by an eminently quaffable Australian Shiraz. Simple, straightforward English fare, but none the worse for that.

The Hilton at The Ageas Bowl made an excellent base for exploration of the area. A short drive to the naval dockyards and D-Day Story at Portsmouth, within a half an hour you can find yourself in the mesmerising New Forest, taking a stroll with the horses and ponies that wander freely there. The hotel also has special packages for people who want to stay the night before embarking on a cruise from Southampton, leaving their cars in the spacious parking area.

It also has proved something of a hit with people wishing to play a round of golf on the adjacent course before retiring to the Lakeside Bar for a quick snifter while reminiscing on putts missed. The inclusion of the spa means that – to adopt an alternative ball-sport metaphor – the Hilton group has covered all its base in providing an ideal location for a leisure weekend.

However, it is the hotel’s proximity to the cricket ground, overhanging the sightscreen that surely is its major draw. Until they convert the Long Room at Lords into des res apartments this is as close to hearing the sound of leather on willow as you can get.

If you have enjoyed Mark’s review of the Hilton at The Ageas Bowl, read his take on Orestone Manors : Fawltless Towers.

Reserve a Room at the Hilton at The Ageas Bowl

If you wish to coincide your visit to the Hilton at The Ageas Bowl with taking in a game, then click here for a list of fixtures. Alternatively, you can download the Hampshire Cricket App.

Hilton at The Ageas Bowl