Measuring a lofty 314 metres the King Power MahaNakhon tower features Thailand’s highest observation deck and rooftop bar. It’s a whole five metres higher than the Baiyoke Tower that has been a tourist draw for many years. The open air skywalk and observation deck at the top of the tower opened late 2018, and, as frequent visitors to Bangkok, we were keen to check it out.

Here are some photos from the highest observation deck in Bangkok. 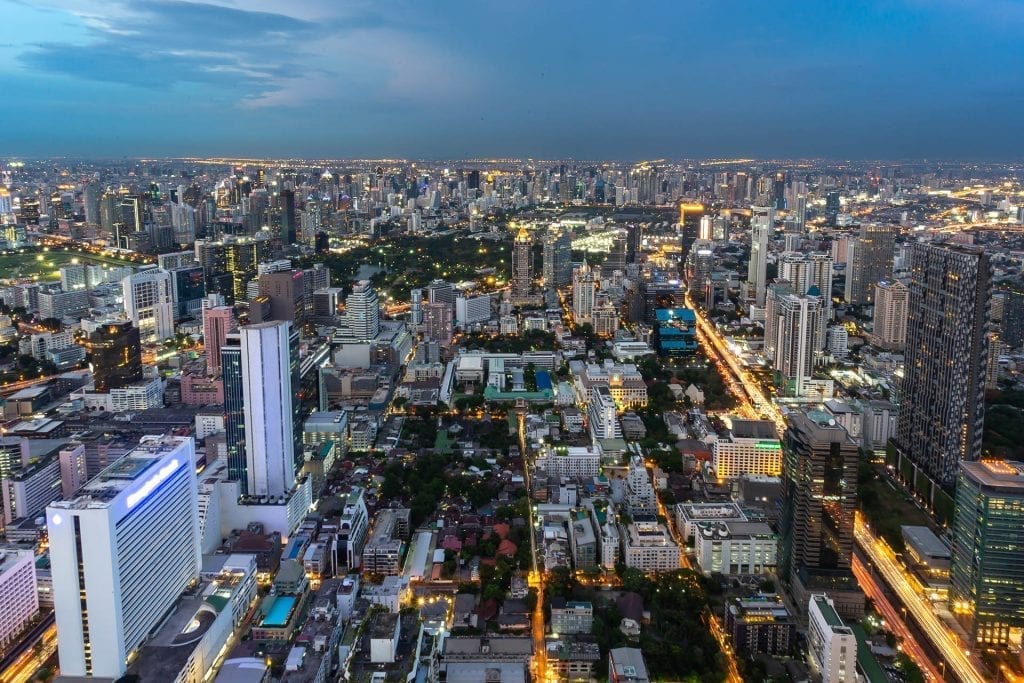 Bangkok comes alive at night. The city lights are a major part of what makes the view from the MahaNakhon tower so special. I think it’s well worth visiting in the early evening, or just before sunset as we did to get the best of both worlds. Watching the light change as the sun goes down and the city’s spectacular illuminations turn on is the most magical sight to behold. A fair morning would give you a different perspective without any crowds and on a clear day you can supposedly see all the way to the Gulf of Thailand. 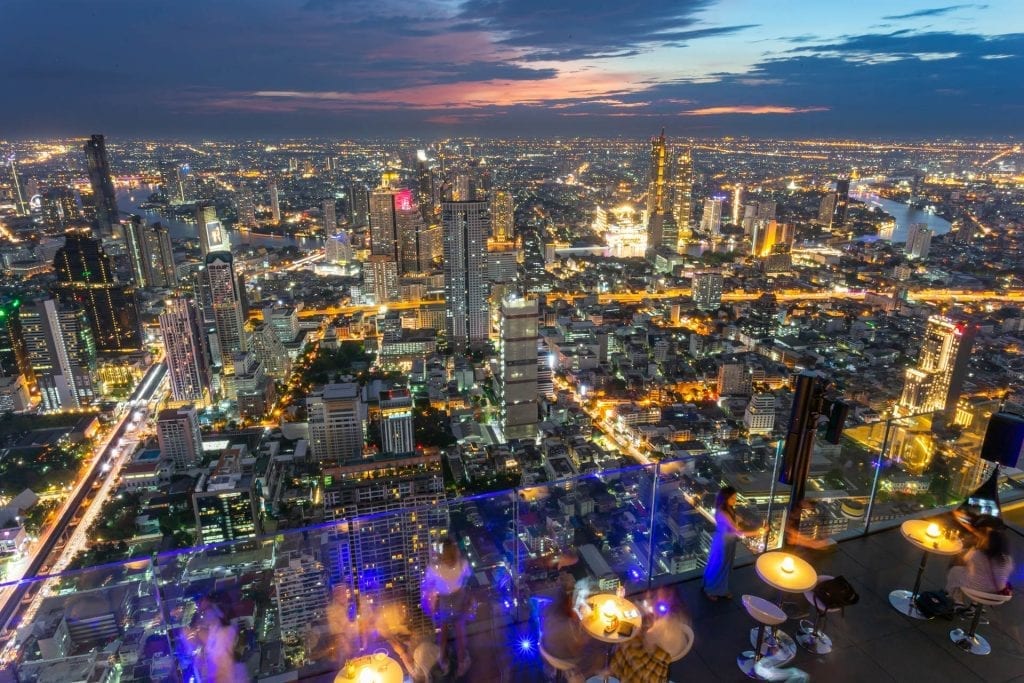 There’s a bar on the top where you can buy possibly the most expensive Chang beer in town – at nearly 300 baht a glass – and many more even pricier options. The plastic glassware didn’t exactly match the high-end prices, but as it can get windy at the top I’d suppose they’re more function over form. We did however have no problem getting a table, which was nice. Try that at the Banyan Tree’s Moon Bar at 6pm on a Friday and you’ll be standing round for a while – but that has no ticket charge just to go up. 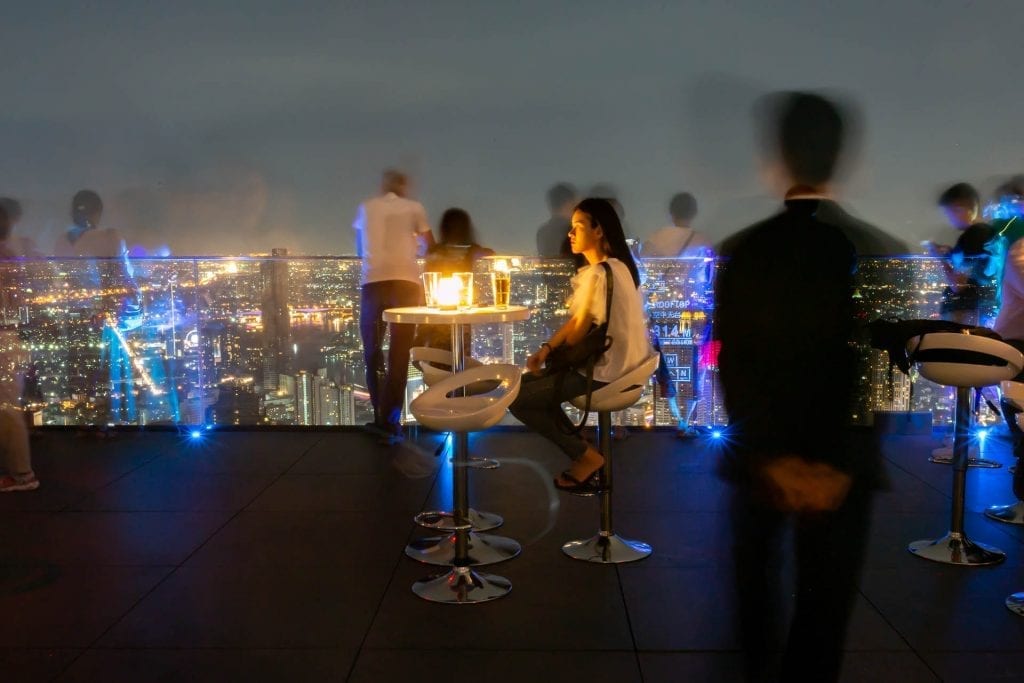 We spent much longer at the top than anticipated; it’s a very pleasant place to stay for a couple of hours and have a drink. It has a very relaxed and unrushed atmosphere, and a quite good live band adds to the ambience. 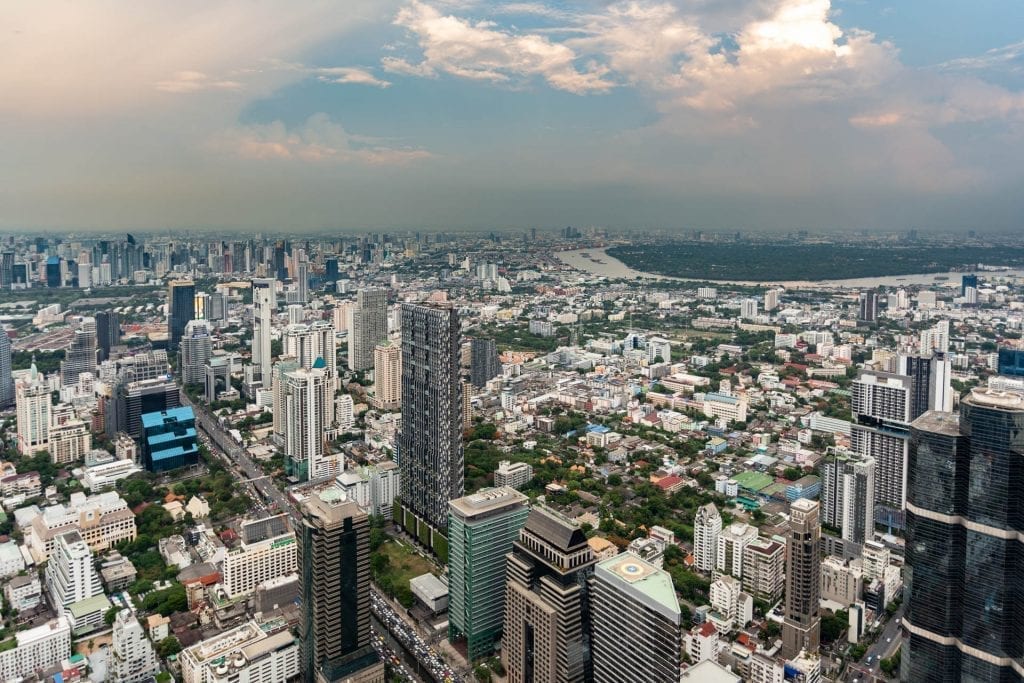 The vertical journey to the top starts with a high-speed lift to the 74th floor that is an immersive experience in itself. The interior of the lift is covered in high resolution digital screens showing a CGI-enhanced video of the outside view. It’s one of the more interesting lifts I’ve ever been in and quickly passes the 50 second journey.

The 74th floor is a 360-degree indoor observation deck. We didn’t spend much time here as I was keen to get to the roof before the sun went down. But in hindsight this level offers some views or photo opportunities that you can’t easily get from the roof. The east and west views on the roof are difficult to photograph due to the lift and the glass tray hindering access to the edge – so it’s better to get these shots on the indoor level. Since it’s all new, the glass is very clean so it’s possible to get good photos through it.

Photo Tip: When photographing through glass put your lens right up against the glass to prevent reflections. Keep it parallel, not angled down. 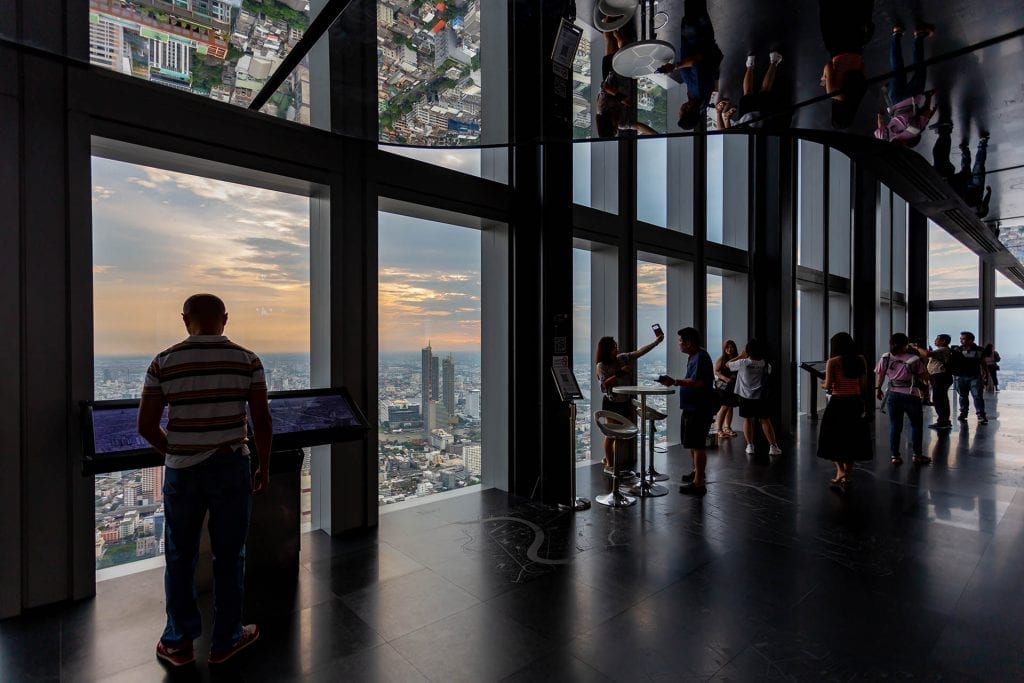 You ascend the final few floors to the 78th floor via an escalator and a circular glass lift. You’ll be treated to views of an under-construction restaurant on the 76th and 77th levels. It’s just a vehicle to get to the top.

I hadn’t previously been to a glass floor at this kind of height, and while I’m not bothered about heights it was a genuinely scary experience stepping out onto the glass tray for the first time. I can certainly see how it would set some knees trembling. You aren’t allowed to get your phone or camera out while standing on the glass though, so selfies are therefore impossible – you’ll need to ask someone else to take your photo from behind the barrier.

More Bangkok skyline photos from the top of the tower

When to visit the MahaNakhon Tower

We visited at 6pm on a Friday evening, naturally we expected it to be busy at this time but we walked straight in with no wait for tickets. The skywalk seemingly hasn’t had a big advertising campaign and isn’t on the radar for many tourists yet. It’s a good time to go. A very pleasant surprise compared to the 30-60 minute queues we experienced at the Marina Bay Sands observation deck during a city break in Singapore.

The skywalk and observation deck are open until midnight, with the last admission at 23:00. We timed it for sunset – and luckily the skies were pretty clear considering it was late May and the start of the rainy season.

Buying tickets for the MahaNakhon Skywalk

While it’s possible to book online and pick a time slot, there’s not much reason to. Considering there were no queues at a peak time and the price is identical. I’d suggest just turning up – and you can be sure of the weather that way too.

Getting to the King Power MahaNakhon Tower

The King Power MahaNakhon Tower is located in the Silom/Sathorn district of Bangkok. Take the Silom line of the BTS Skytrain to Chong Nonsi, the tower connects directly to the station. It couldn’t be easier to get to.

Find great deals on flights and hotels in Bangkok

It’s easy to find hotels in Bangkok near the King Power MahaNakhon Tower, or near to any BTS Skytrain station. Just enter your dates in our comparison engine below to search hundreds of hotel and flight deals.

For more information you can visit the official King Power MahaNakhon Tower website at https://kingpowermahanakhon.co.th/