Coinciding with the hundredth anniversary of the highly influential movement, Mark Bibby Jackson sets off in pursuit of Berlin Bauhaus away from the norm. 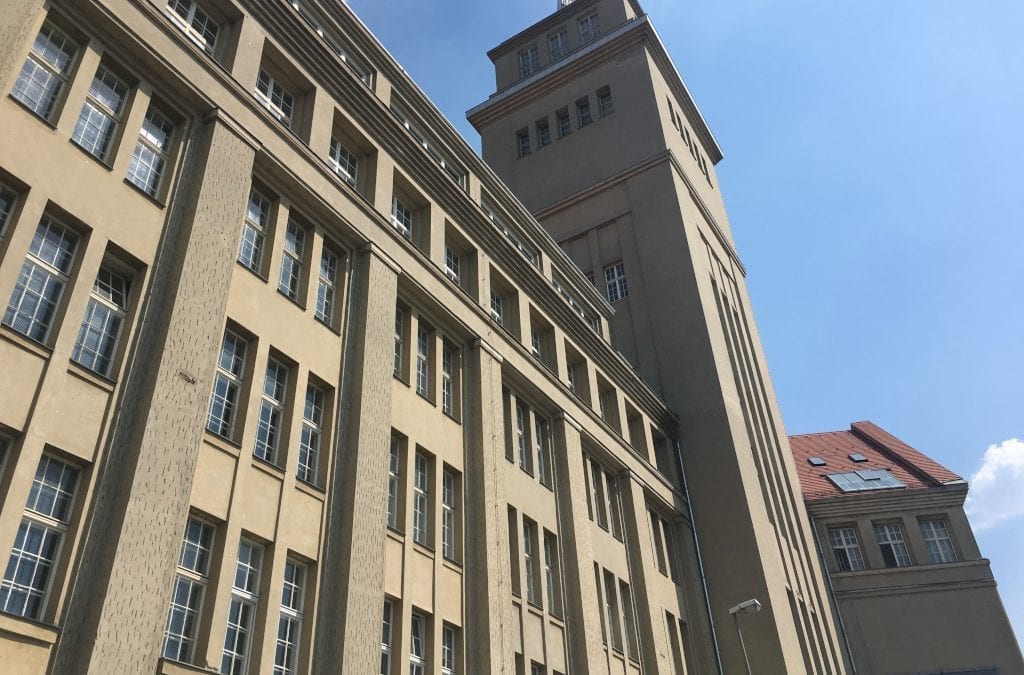 Coinciding with the hundredth anniversary of the highly influential movement, Mark Bibby Jackson sets off in pursuit of Berlin Bauhaus away from the norm.

Bauhaus was possibly the most influential architectural and artistic movement in the 20th Century. Although Bauhaus Dessau is widely regarded as the ‘built manifesto’ of the movement founded by Walter Gropius in 1919, there are many examples of Berlin Bauhaus.

A short walk from Blaschkoallee U-bahn, the Hufeisensiedlung is a housing project built by architect Bruno Taut between 1925-33.

It was part of the large number of social housing built in the twenties to accommodate the flux of workers to the German capital – from 1924-31 some 140,000 apartments were constructed in Berlin. In 2008, it was one of six estates that were made into a Unesco World Heritage Site, Berlin Modernism Housing Estates.

The most striking feature of the Hufeisensiedlung is its shape – Hufeisen is German for horseshoe. The 25 housing blocks are constructed around an inner park, which has a pond in the centre, apparently formed in the Ice Ages.

This is a quiet, suburban part of Berlin. Beautifully maintained with bold blue and white colours, there is a simplicity as well as functionality to the design.

The Zollverein coal mine in Essen might not be an example of Bauhaus architecture, but it is from the same period, sharing the same aspirations. Read Mark Bibby Jackson’s Zech Zollerein : the Metropolis of the Coalmines.

Our second Bauhaus building, the Peter Behrens Building, was built for Emil Rathenau, founder of the NAG, or Nationale Automobil-Gesellschaft, a daughter company of the AEG, from 1915-17 by architect Peter Behrens, at 1-4 Ostendstrasse.

Behrens was a major leader in the Modernist movement, and influenced many architects including both Walter Gropius and Ludwig Mies van der Rohe, who worked for him, as did Le Corbusier.

It has been an architectural monument since 1977, but it is still used by many companies and you can wander around its courtyard freely.

There is something striking about the grand scale of the building, which is quite rightly seen as a monument to the city’s industrial heritage.

Just around the corner is the Schöneweide Industrial Museum on Reinbeckstrasse, which was also designed by Peter Behrens. Originally a transformer factory, a small creative community has established very much in the traditions of the Spinnerei, Leipzig and the Zollverein, Essen, albeit on a much smaller scale.

Perhaps the best place to start your Berlin Bauhaus tour is the Bauhaus Archive (Bauhaus Archiv), which has an informative display on the history of the Bauhaus Movement from its origins in Weimar to it eventually disbanding under Nazi pressure in Berlin.

It’s currently housed in a small building at 1-2 Knesebeckstrasse in the Charlottenburg district of Berlin, while an impressive new museum, due to be completed in 2020, is being constructed.

Upstairs, there is an exhibition featuring female Bauhaus design students, including Annie Albers, who initially wanted to be a painter but discovered fame at a weaving loom. Her work was featured in an exhibition at the Tate Modern that finished in January 2019.

While you might be familiar with Bauhaus Design and Bauhaus Architecture, you may be forgiven for being unfamiliar with the movement’s influence on the world of photography.

An exhibition at the Museum of Photography entitled The Bauhaus and Photography, can correct this.

Its intention is to juxtapose images of the Bauhaus New Vision with contemporary pieces. The exhibition pays reference to the Werkbund exhibition Film und Foto which toured Berlin, Stuttgart and Zurich in 1929-30.

After World War I, German Art was heading in two directions – New Objectivity and New Vision. The former viewed the world from a safe distance, while the latter aimed to broaden people’s consciousness to bring about a socialist society.

According to Kris Scholz, in his preface to Bauhaus and Photography:  On New Visions in Contemporary Art, the Bauhaus movement used photography to promote its design products, and as such there was no coherent Bauhaus photographic style.

The Berlin Film und Foto exhibition was curated by Laszlo Moholy-Nagy and can be seen as a manifesto about the role of photography at the time.

The current exhibition asks how the innovations introduced by the Bauhaus movement still contribute to the development of photographic visual art today.

The virtual tour of the 1929 exhibition is amazing. Stepping back in time to see the original pieces through a totally modern medium was at the same time enthralling and consistent with the founding principles of the Bauhaus movement.

The exhibition continues into the present day, including Wolfgang Tillmans’ Anti-Brexit Campaign from 2016, which was also shown at the Tate Modern.

At the end of my Berlin Bauhaus Blitzkrieg, I felt that I had a far firmer grasp of the revolutionary movement.

It strikes me that Bauhaus was a philosophy of challenging the existing mind-set, and through new perspectives to create a new order that benefited the people.

As such, I doubt whether Walter Gropius and the gang would approve of the expensive pieces of pseudo Bauhaus furniture you can buy. However, the influence of the movement on the 20th Century is undeniable, and seems to be undiminished now. If you can, book a visit to Berlin before 25 August, as this is when The Bauhaus and Photography exhibition ends.

Mark’s trip was hosted and arranged by www.germany.travel.

History of the Bauhaus Movement

Gropius founded the Bauhaus Movement (Staatliches Bauhaus) in Weimar in 1919. Bauhaus, literally means “building house” in German. The biding principle was to form a work of art (Gesamtkunstwerk) that would combine all the arts, including architecture.

The Bauhaus style became one of the most influential currents in modern design, art and architecture.

Berlin is a great city to visit, even if you are not into Bauhaus. Read Mark’s Things To Do in Berlin : Wine, Art, Fine Food and Beer, or Kreuzberg : Berlin Stuck in the 80s.

One of the great things about Berlin is its transport system with U- and S-Bahns, trams and buses running everywhere across the city. Purchasing a Berlin Welcome Card upon arrival is well recommended. In addition to providing free travel on public transport, you can get discounts on many places across the city. Purchase a Berlin Welcome Card from 48 hours to six days at airports and tourist information centres. For more information click here.

If you are looking to book one of the numerous hotels in Berlin, or a flight to the German capital, enter your dates in our flight and hotel comparison engine to search hundreds of sites for the best deals:

More Things to Do in Berlin

For more information and ideas on things to do in Berlin, try the Visit Berlin website.