On an Istanbul city break, Mark Bibby Jackson discovers a vibrant place on the cusp of Europe and Asia that is perpetually re-inventing itself. 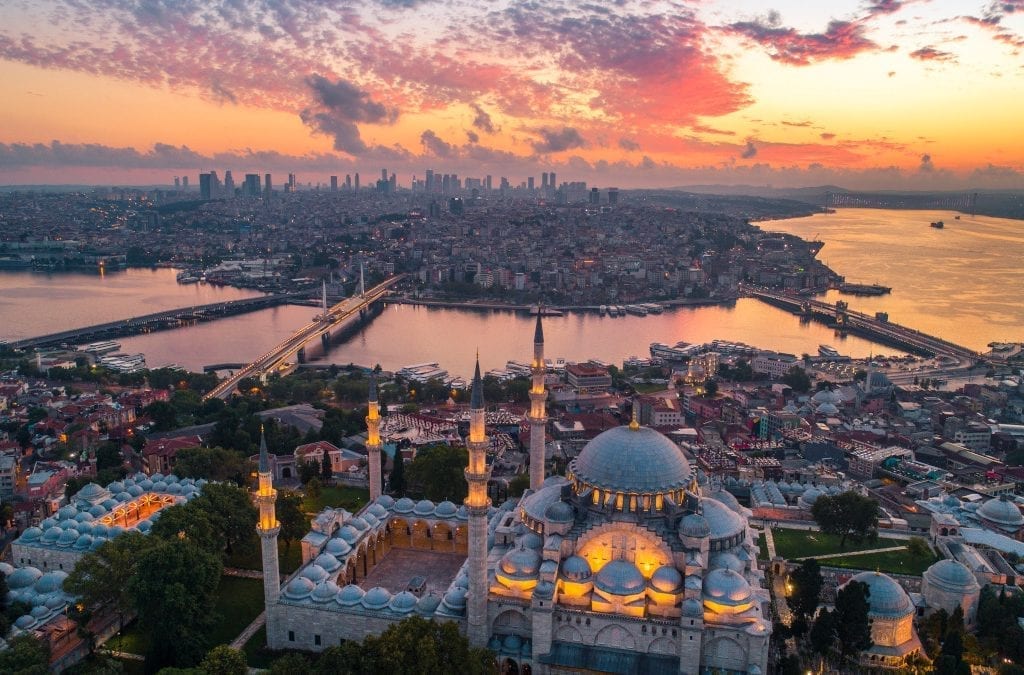 On an Istanbul city break, Mark Bibby Jackson discovers a vibrant place on the cusp of Europe and Asia that is perpetually re-inventing itself.

As a Liverpool fan, memories of a wonderful night in 2005 inevitably come rushing through my head on my weekend in Istanbul; my first visit to the largest city in Turkey. That famous night in 2005, I spent huddled on my ‘lucky couch’ in Hanoi, as Gerrard launched the most unlikely of comebacks to bring the Champions League Final home.

Now, it is the city of Istanbul that is seeing somewhat of a resurgence in tourism as security concerns have lessened since the nightclub shooting that claimed 39 lives in January 2017.

Perhaps strangely, football is seen as part of the city’s tourist draw.

Which explains why I spend my Saturday afternoon not at the Ataturk Stadium, where the 2005 Champions League Final was held, but the BJK Vodafone Park, home of Besiktas, and venue for the UEFA Super Cup Final on 14 August between Liverpool and Chelsea, courtesy of the Turkish Culture and Tourism Board.

First on our Besiktas Stadium Tour, we are taken around the Besiktas’ museum and introduced to the club’s numerous domestic honours, listen to the crowd’s deafening roar in a sound-proof room, and then take a virtual flight around the city, before entering the stadium proper for real.

Workers are preparing the pitch for the ensuing season so we can’t walk on the hallowed turf, but those fortunate to have tickets for the game cannot fail but be impressed by the state-of-the-art stadium, especially those in the VIP area, who can follow all the contentious moments on a small screen on the back of the seat in front of them, long after VAR has made its dubious decision.

What to do in Istanbul – Bosphorus Boat Trip

The city, of course, is so much more than the venue for a football match. A sprawling metropolis of 16 million people – the tenth largest in the world – this is where Europe meets Asia.

Earlier that morning, we had taken our breakfast on a yacht along the Bosphorus, the narrow strait of water that separates the two continents.

As experiences go, this is right up there with the best.

I can almost inhale the history in the Istanbul air as we pass the major sites on the European side, such as the Dolmabahçe Palace, built for Sultan, Abdülmecid I from 1843 to 1856, and where Ataturk, founder of the modern Turkish state, lived out his final years. Or the European Fortress built in 1452, which fell just one year later when Sultan Mehmet II conquered the city – clearly not built fit for purpose. This is the narrowest point on the Bosphorus with just 600 metres separating the two land masses.

Men dive into the waters, before a few dolphins come to join us, once we have finished our breakfast.

Hugging Asia on our return, the contrast between the two halves of the city could not be more pronounced. Whereas the buildings are stacked high on the European side, where the price of property is at a premium and most of the business is based, the Asian side is far greener and seems much more peaceful. Asli, our Istanbul travel guide, adds that the people are friendlier there too.

Towards the end of our boat trip, we disembark at Maiden’s Tower, a lighthouse that guards the southern end of the Bosphorus. The current structure dates back to the 19th Century, though one has stood here since Roman times, and it is easy to see why as we clamber to the viewing platform at the top and take in both sides of Istanbul.

A Night in the Museum – Hagia Sophia

It is from here that I make out the shape of the city for the first time. The previous evening, we had arrived late and were taken straight to dinner at the excellent Murver Restaurant before having a private tour of Hagia Sophia.

When it was built in AD 537, the Hagia Sophia was the largest church in the world, before being converted into a mosque in 1453, taking the opposite fork to the Alhambra Palace in Granada. It was then that a new gate was placed so the structure faced Mecca, and all of the Christian relics and mosaics were removed. But, by and large, the structure with its colossal dome remains just as it did before its conversion, and some vestiges of its previous Christian purpose have now been uncovered.

We are most fortunate to have this private tour, which gives us the space all to ourselves, apart from a cat. She, apparently, is almost as famous as the Hagia Sophia itself, as the one that Obama stroked when he visited in 2009.

Impressive walls, dating back to the fourth century surround the old city. Inside them, next to Hagia Sophia lies the Blue Mosque, easily discerned from other mosques by its six minarets. Currently, the mosque is being refurbished with scaffolding obscuring the majority of the blue tiles from which it receives its name.

The Streets of Istanbul

Hagia Sophia is in the ‘old town’, which is a small part of modern day Istanbul. It was to here that the capital of the Roman Empire moved from Rome in 324 AD; the city was renamed Constantinople after the Emperor Constantine six years later.

So, instead of entering the mosque, we take to the streets of the city. First visiting the upmarket Pera district where we have lunch at the restaurant Sahrap, and then the more Bohemian Balat.

It is the latter where we discover Istanbul away from the tourist crowds.

An old man poses for the camera, cigarette in mouth. Vendors sell stuffed mussels – a delicacy of the city – on street corners, while cafés mingle with antique shops. I narrowly escape purchasing some trinket in an auction as, perhaps fortunately, the auctioneer refuses to take my tentative bid, perhaps fearing I am parodying Cary Grant in North by NorthWest.

At night, we experience yet another side of this perplexing city. Bomontiada used to be a beer factory. Now, it has been transformed into a cultural, artistic and entertainment centre.

A musician is performing on a stage to an enrapt audience as we pass through a courtyard that would not look out of place in the trendier parts of London. After dinner at lofty Kilimanjero restaurant, we are taken to the club Populist, where a DJ mixes tunes from the 80s and 90s as we polish off a couple of Old Fashioned cocktails. It’s as though we have been transformed both in time and place to another culture.

As the clock ticks its way past midnight, instead of taking our carriage back to our hotel, we are dropped off at central Taksim Square, where we plough our way through the throng of local people taking to walk the streets, in search of the cool night air.

Here, we settle at the side of the road and play some backgammon while a couple of our group share a shisha pipe and I drink an Efes beer. It is well past 2am by the time we eventually traipse back to our rooms at The Marmara Taksim hotel.

Things to Do in Istanbul – Topkapi Palace

It is the image of a city of contradictions that I will take away from my short Istanbul city break. A place that has always bridged two continents and which perhaps shows the path for toleration of the two cultures of Islam and the West.

The following morning, we return to the old town and to the Topkapi Palace, which served as the home for successive Ottoman sultans from the 15th century to 1856, when Sultan Abdulmejid I moved his court to the Dolmabahçe Palace.

Topkapi Palace is a series of buildings within successive courtyards rather than a solitary grand palace in the European style, like the Dolmabahçe. It is easy to understand why Mehmed the Conqueror chose to set up his court here. From its walls, he could purvey all the surrounding waters and repel any invaders. Now, they are used to take selfie shots.

The palace has an interesting display of weapons through the ages, as well as artefacts and ceramics. There is also a Roman church that Asli says is even older than the Hagia Sophia.

Our final visit is to the Serefiye Cistern, which the Romans used to store the much-needed water they ran along aqueducts across the city. It’s now home to an art exhibition.

Perhaps, this is how cities such as Istanbul survive, constantly re-evolving to reflect current trends, or whomever is in charge at the time, whether it be Roman, Ottoman or modern-day Turkey.

Will Istanbul yield itself more to western influences, such as the Starbucks next to our hotel, or will the traditions remain? My weekend in Istanbul suggests that both might be true. Whatever the future holds, one thing is for sure, Istanbul will remain an enigma bridging the chasm between Europe and Asia, as it always has, regardless of who takes the UEFA Super Cup home with them on 14 August.

Turkish Airlines runs a daily service from London Heathrow and Manchester to the brand new Istanbul Grand Airport. To book a flight for your Istanbul travel, please use the comparison engine below.

The Marmara Taksim hotel is well located on Taksim Square, and with wonderful views of the Bosphorus. However, if you wish to search for more Istanbul hotels, please use our comparison engine below. Simply enter your dates to search hundreds of sites for the best deals:

Istanbul is currently going through a period of relative stability, however, almost inevitably considering its location, this is in a state of constant flux, so check up on the latest travel advice before you book your flights and hotels for your Istanbul city break.

Istanbul Tourism and More Things to Do in Istanbul

For more information on things to do in Istanbul and the rest of Turkey, visit: https://hometurkey.com/en. Photos provided by Home Turkey, unless otherwise credited.

Things to Do in Sacramento California in 48 Hours