As the start of a trip around central Vietnam, Joe and Amber finds things to do in Da Nang. Words and photos by Joe Ogden. 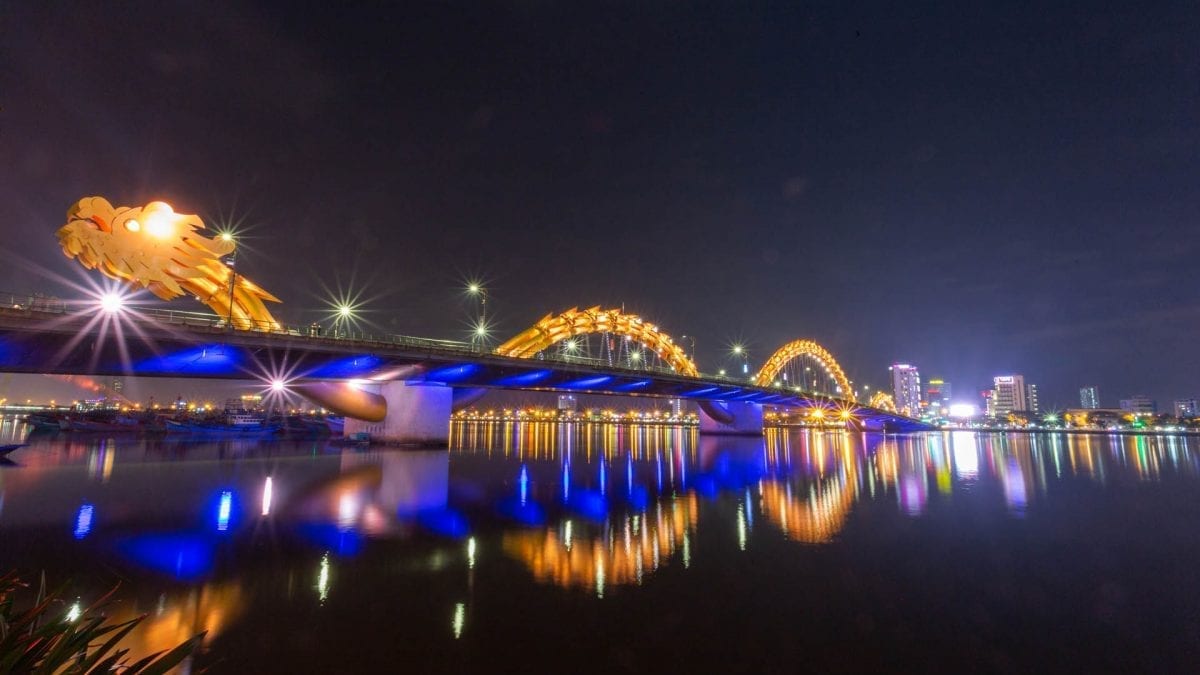 The beachside port city of Da Nang is Vietnam’s third largest, and reportedly its cleanest city. Equidistant between Hanoi in the north and Ho Chi Minh in the south, it is an important hub in central Vietnam and is the first stop on our Vietnam travels. We spend two days exploring things to do in Da Nang.

City of Bridges: The Dragon Bridge in Da Nang

The city of Da Nang is known for its bridges and it’s not without merit. The Han river that flows through the city is adorned with multiple examples of eccentric engineering, from the famous fire-breathing Dragon Bridge (main photo above), the Han River Bridge – the only swing bridge in Vietnam, Tran Ti Ly Bridge with its sail-like structure, and the cable-stay Thuan Phuoc Bridge by the fishing port. At night these structures are beautifully lit creating a colourful and dynamic cityscape best viewed with a slow walk along the riverside promenade.

One bridge you might overlook, intentionally or not, is the Love Lock Bridge. Follow the heart shaped trees along the river from the head of the Dragon Bridge and revel in the cheesy romance as you buy an engraved lock to snap shut on the railings. Padlocking your loved one to a bridge seems to have spread throughout the world as a purpose-built attraction since that bridge in Paris started falling down. 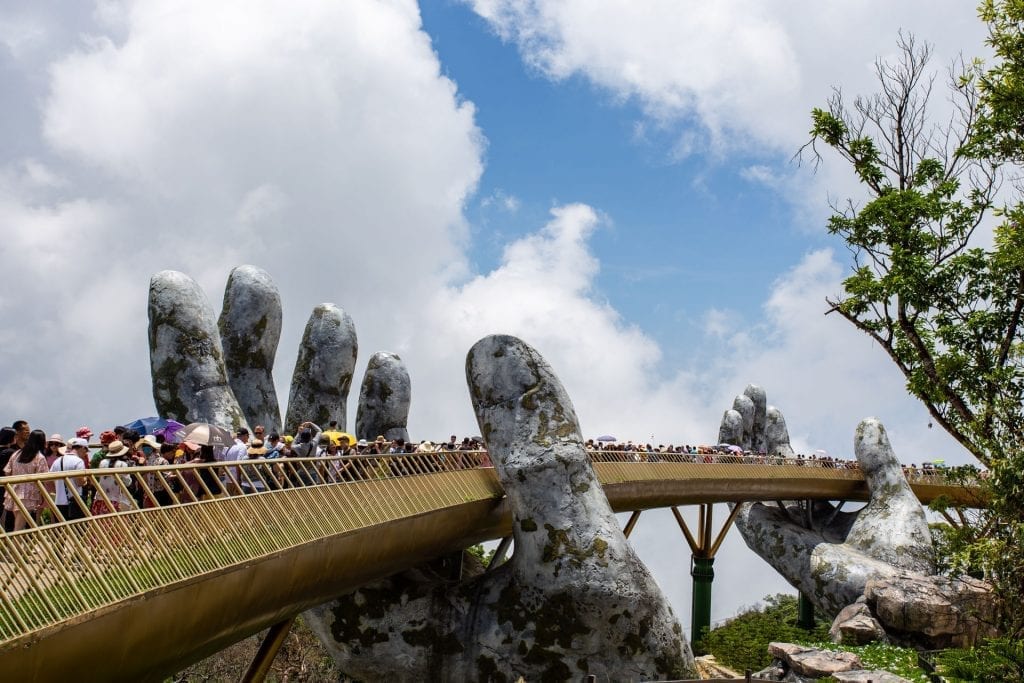 We find the sixth bridge of our trip at 1,500 metres up in the hills overlooking the city. At the bizarre Ba Na Hills theme park there is little resemblance to the original French hill station founded in 1919. The most popular attraction – especially amongst Southeast Asian tourists – is the “Golden Bridge”, or “Hands Bridge”. This pedestrian bridge opened in June 2018 and has proved a hit, with thousands of daily visitors making the cable car journey up the mountainside to pose for Instragrammable photos. Brace yourself to dodge wayward selfie-sticks and tour groups – don’t expect any personal space unless you get up very early. 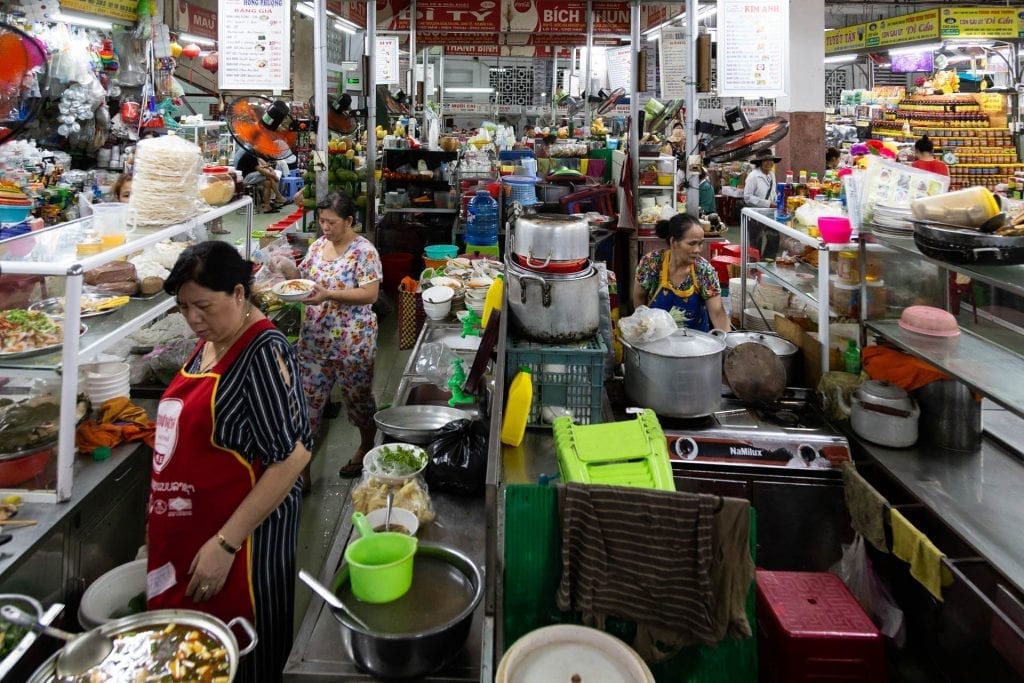 Han Market: Not a Bridge

Along the river in the centre of the city lies Han Market, a bustling two-level indoor market in operation since the 1940s. The ground floor is home to food in all its forms, either fresh, packaged or cooked, while the first floor is a maze of clothing stalls. Get your own Vietnamese ao dai custom tailored in an hour or buy some knock-off Adidas trainers two stalls away. 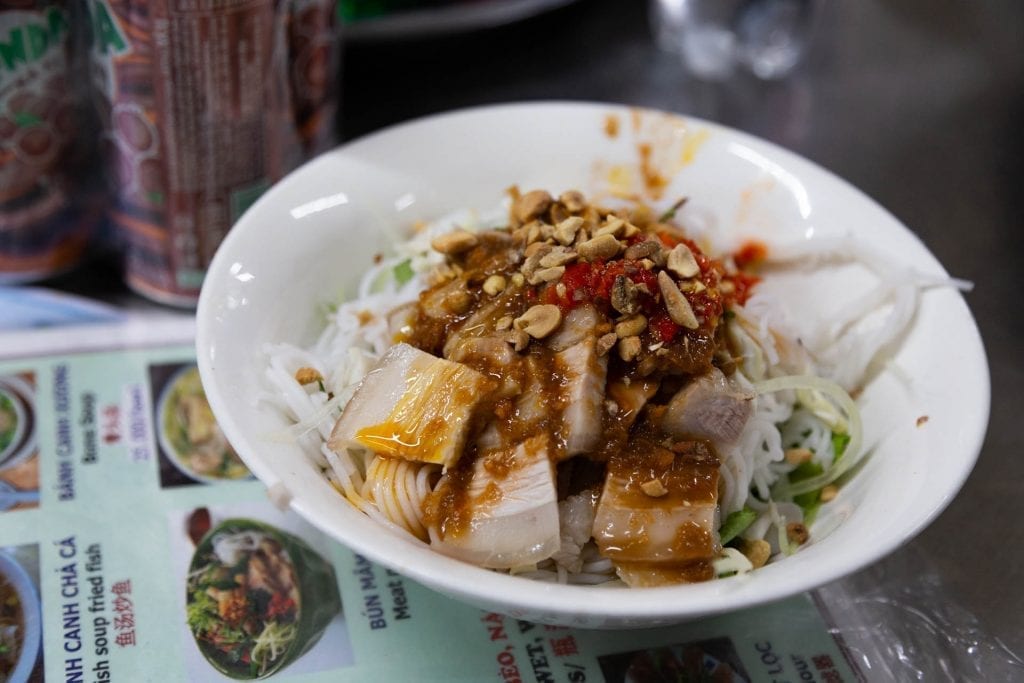 The ground floor of Han Market was also where we found the best Vietnamese street food in Da Nang. Another good location for evening street food is by the river at the head end of the Dragon Bridge.

More Things to Do in Da Nang: My Khe Beach and the Marble Mountains

Da Nang Beach lies on the eastern edge of the city. Our taxi driver proudly informed us this palm fringed stretch of urban sand was just like Miami. The north end of the beach was surprisingly quiet and peaceful, but as you move south you’ll find hotel and resorts under construction on a massive scale. With the ability to dock giant cruise ships, the city of Da Nang is gearing up for an influx of (mostly Chinese) tourists.

The Marble Mountains, a limestone and marble outcrop in the southern part of the city, are easy to reach. We stopped off for an hour to explore. After scaling the mountains in a glass lift, you’ll find hundreds of stone stairs leading off in all directions. Venturing upwards and to the left we found a cave with a slippery floor and possibly the best freshly squeezed orange juice in the world, a welcome refreshment in the 40-degree May heat. Not being keen to climb more stairs, the rest of the visit to the Marble Mountains was a slow descent emerging into a throng of souvenir shops. 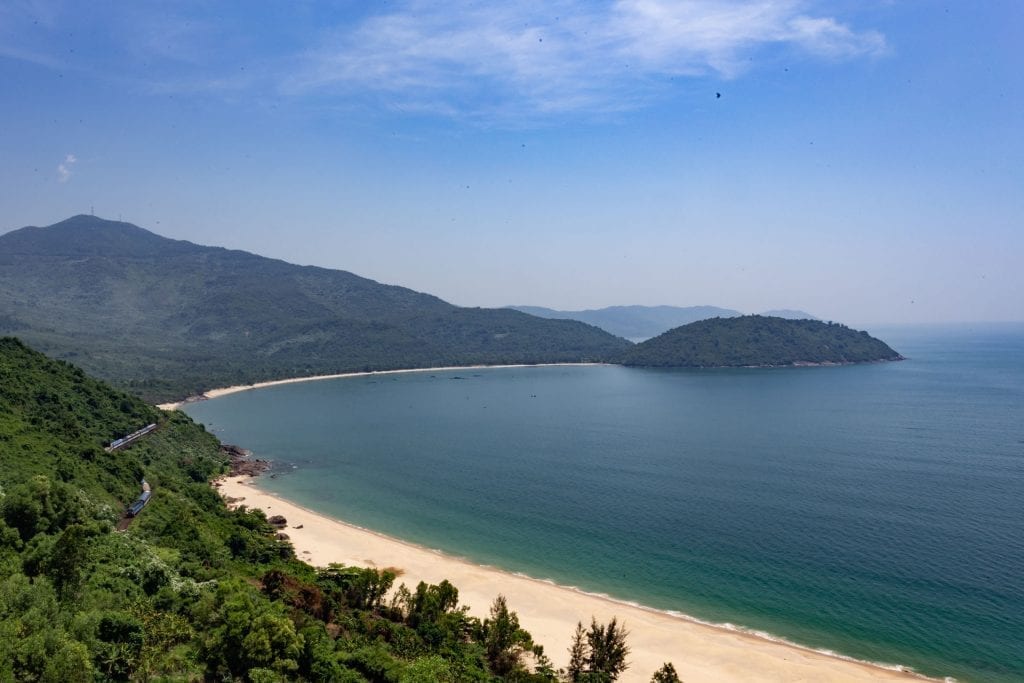 We headed over the Hai Van Pass as we left Da Nang for Hue, but you can also drive the pass and back as a day trip if you aren’t travelling further north. Only 30 minutes outside the city you’re treated to spectacular views over Da Nang bay, taking in the surrounding landscape of mountains, beaches, the city and industrial scale shipping all in one view. The vista half-way up is better than the summit, but at the top you’ll find a ruined French era fort which will take all of 10 minutes to explore. We also stopped at Da Nang’s Tho Quang fishing port, home to thousands of fishing boats docked in the rubbish strewn water. The Vietnamese fishing boats here are sometimes involved in skirmishes with Chinese vessels vying for territory in the South China Sea – a contentious issue between the two historic rivals.

A tripod is a must to capture the colourful city illuminations. My most used lens was the 17-40mm, a nice wide angle for the bridges and river views. The indoor market called for a fast 50mm. If you plan to see the Dragon Bridge’s weekend fire and water show make sure you go to the head end on the east side of the river.

There is a wide range of accommodation in Da Nang. We opted to stay in a hotel next to the river, between the Dragon Bridge and Han River Bridge. This location gave us easy access to the riverside promenade, the bridges and Han Market. Other visitors choose a beachside hotel in Da Nang with spectacular views over the ocean.

As the main hub of central Vietnam, Da Nang International Airport has an increasing number of direct flights from cities around the region. We flew on Bangkok Airways from Bangkok, a route introduced in the last couple of years. Other airlines that fly into Da Nang airport include Vietnam Airlines, AirAsia, and VietJet.

Enter your dates in our flight and hotel comparison engine to search hundreds of sites for the best deals:

If you’re from one of 24 countries eligible for visa free entry to Vietnam then you can visit without any extra hassle or costs, just turn up at the airport and get a stamp for 15 or more days. As of May 2019, the list includes the UK, most European countries and local ASEAN countries. It is highly recommended to check the visa requirements yourself before your trip. British citizens can check the gov.uk website for the latest information.