On the second leg of their central Vietnam travels, Joe and Amber visit historic Hue. Words and photos by Joe Ogden.

Travel Articles > Travel Destinations > Southeast Asia > Things to Do in Hue: A Trip Back in Time 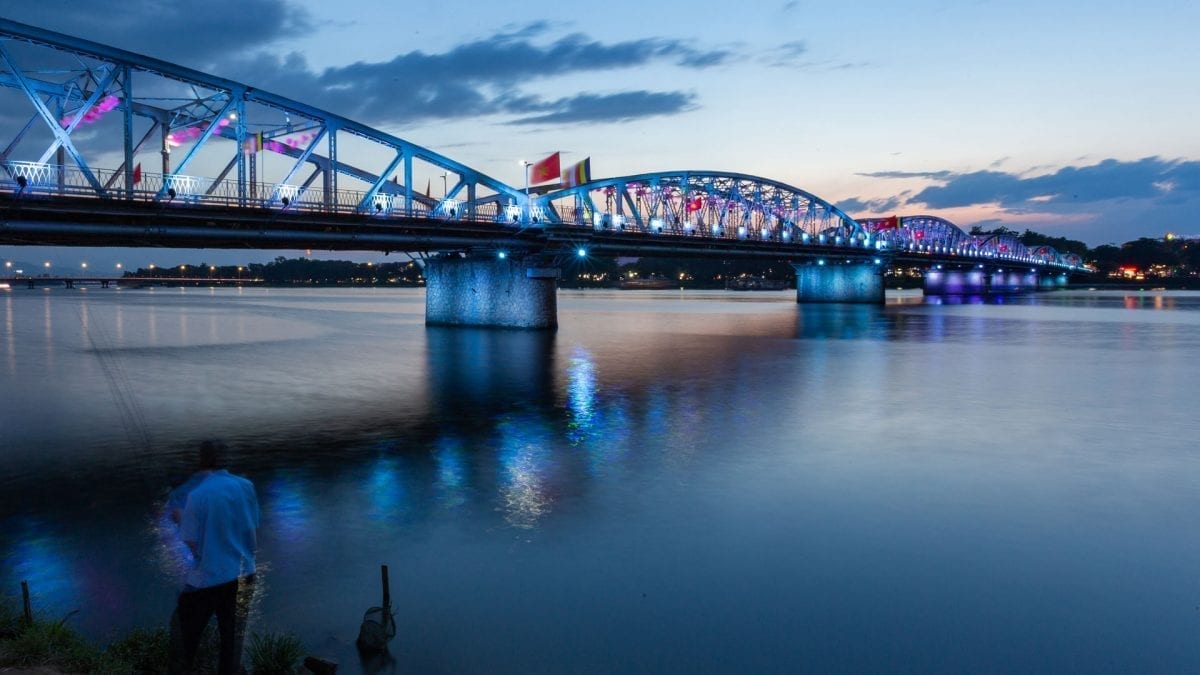 Continuing his photographic journey around Vietnam, Joe Ogden leaves Da Nang behind to discover the wonderful things to do in Hue.

The highlight of our visit to Hue was the hotel itself. As you enter the Hotel Saigon Morin you slip back in time to a past era. Built in 1901 under French Colonial rule it has stood proudly at the foot of the Trường Tien bridge through the ups and downs of the city. Breakfast in the central courtyard sat on wrought iron furniture amid century-old trees and fountains was as serene as it was delicious. I can’t remember ever experiencing a better hotel breakfast  anywhere in the world. Black and white photos depicting the hotel’s past, adorn the hallways, turning the hotel into a living museum. The rooms are vast and well-appointed with service befitting the bygone era. One claim to fame is that Charlie Chaplain stayed there on his honeymoon in the 1930s. 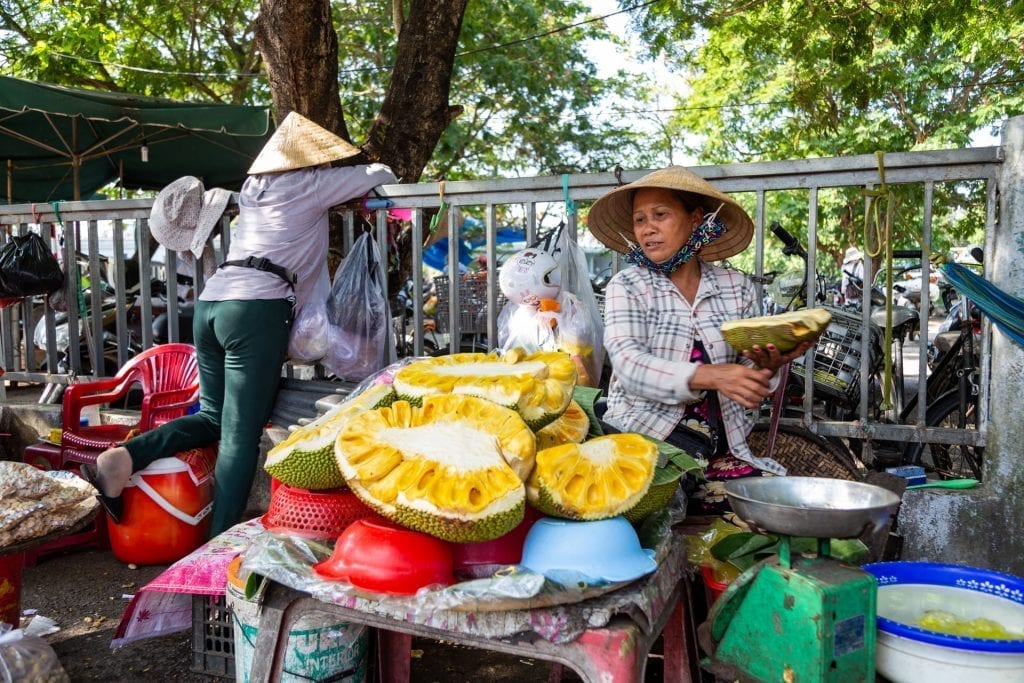 Just over the river is local Dong Ba market, that sells everything a local resident could need, and much they don’t. Navigating the bustling narrow passageways feels like an authentic experience with none of the artificial tourist sheen you often discover in local markets at major cities across the region. 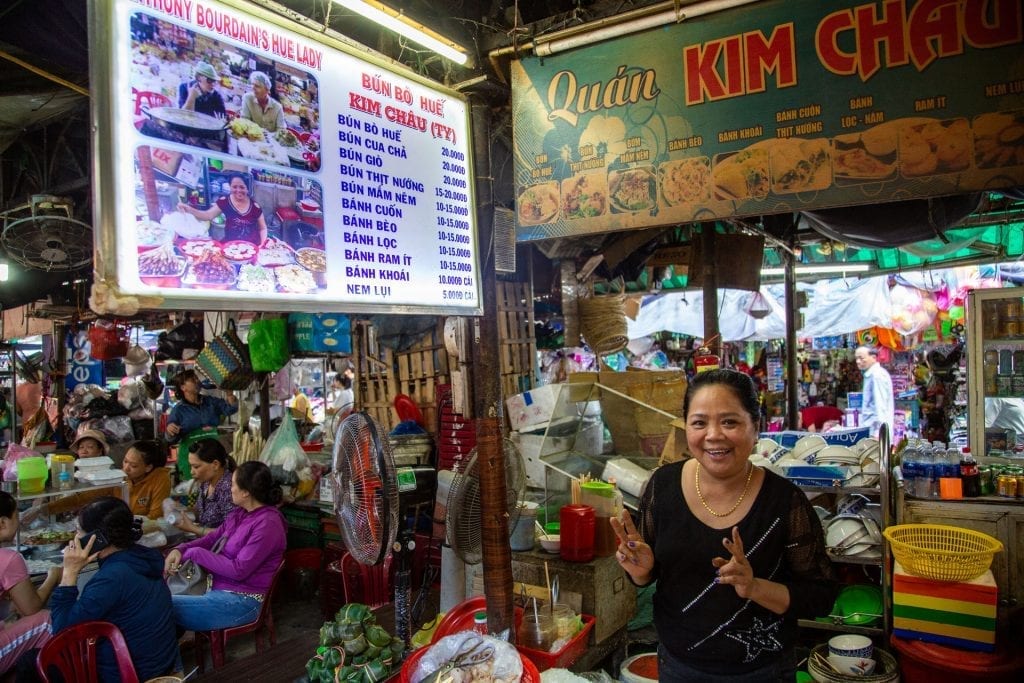 Right in the middle of the market you’ll find a few street food stalls – including one serving Hue’s famous beef noodle soup (bún bò Huế) endorsed by the late Anthony Bourdain. We made the obligatory street food stop and it didn’t disappoint. 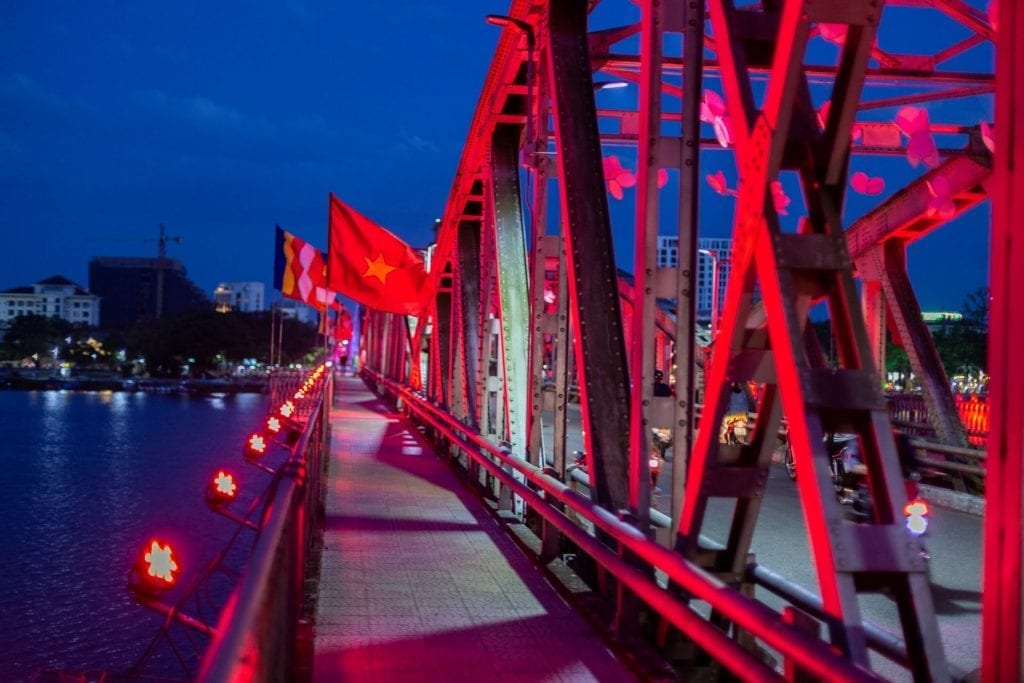 Trường Tien bridge is a a central city landmark that has survived numerous conflicts and near destruction. It has become a symbol of the city’s resilience and is now proudly decorated with a colourful modern lighting setup to rival Danang’s Dragon Bridge. The bridge is widely reported to be designed by Gustave Eiffel (of Eiffel Tower fame), but was apparently built several years after his retirement making that an impossibility. Still, it’s a fitting legend that is reflected in the architectural style. Evenings in Hue can be spent on the riverbanks around the bridge where both locals and tourists walk, relax and soak up the atmosphere. It’s also just a short walk to the small but lively tourist and backpacker area with numerous restaurants and bars serving a range of local and international cuisine. 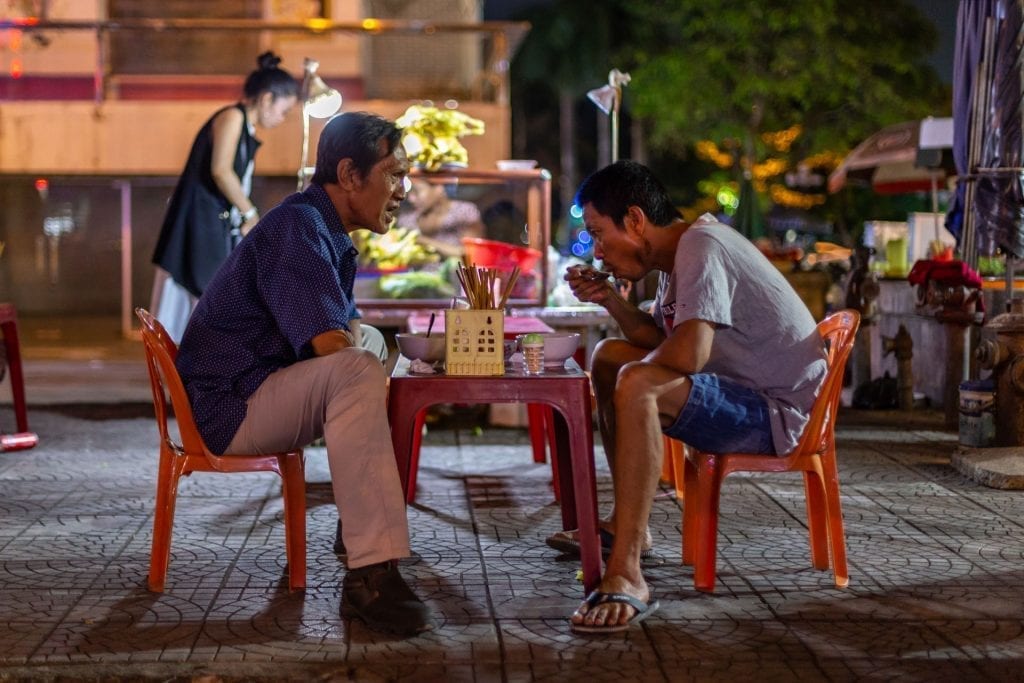 Unfortunately, the night market that was located along the river has now been shut down (we visited in May 2019). Like in Thailand we’re used to street markets coming and suddenly disappearing overnight following the current whim of the government. In lieu of the night market’s closure, the best bet for street food is outside the shopping centre just over the river next to the Dong Ba market.

Things to do in Hue

We filled one day in Hue with a trip around the ancient city and tombs of the Nguyen dynasty emperors. Walking the 200-year old structures of the citadel added further to the historical feel of the city. A great place for history buffs, but it’s essential to read up a bit while visiting to better understand the importance of the places.

The second day was equally historical, but covered much more recent and bloody events. A long drive to the DMZ, a sobering visit to Khe Sanh military base, a walk over the former border bridge and surrounding museums helped fill in gaps in my understanding of Indochina’s turbulent and extremely complex political past.

As we drove the coastal road back to Hue city we made an impromptu stop at a bustling fishing village and wet market. A lucky find for some great market photography.

After three short nights we departed Hue with a head full of history and a feeling that we could have easily stayed longer. A fascinating and hassle-free trip. The most difficult thing was correctly pronouncing the name of the city (for which I settled on “huh-WAY”).

Travelling to Hue from Da Nang via the Hai Van Pass

The drive from between Da Nang and Hue is as much of an attraction as arrival in the city itself. Hue can be reached with a three-hour drive from Da Nang over the Hai Van pass – the coastal mountain road made famous by Top Gear. It’s quite cheap and easy to hire a car and driver (we used VM Car), but many travellers emulate the TV trio and take on the pass by motorbike, or even by bicycle for the super fit.

The route offers spectacular views over the bays so hope for a clear day and stop-off at key points. You’ll be treated to views over the sea with the skyscrapers of Da Nang city in the distance, then once over the pass you’ll descend to sea level with beaches and brackish lagoons where oysters are farmed. 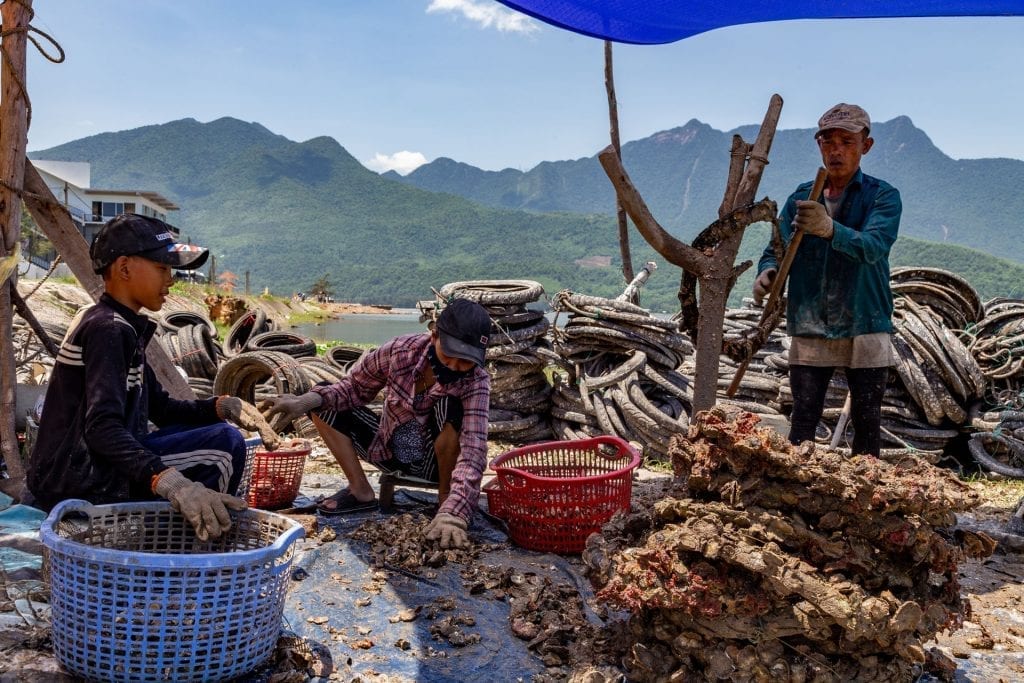 The reunification railway also traverses the mountain pass as it travels between Ho Chi Minh City and Hanoi. The railway is a key symbol of a unified Vietnam and is a great (albeit slow) way to explore the country. If you don’t have weeks to dedicate to a country-wide trip but still fancy a train journey I’d certainly recommend the Hanoi-Sapa sleeper train if you’re ever in the north, a truly spectacular experience. 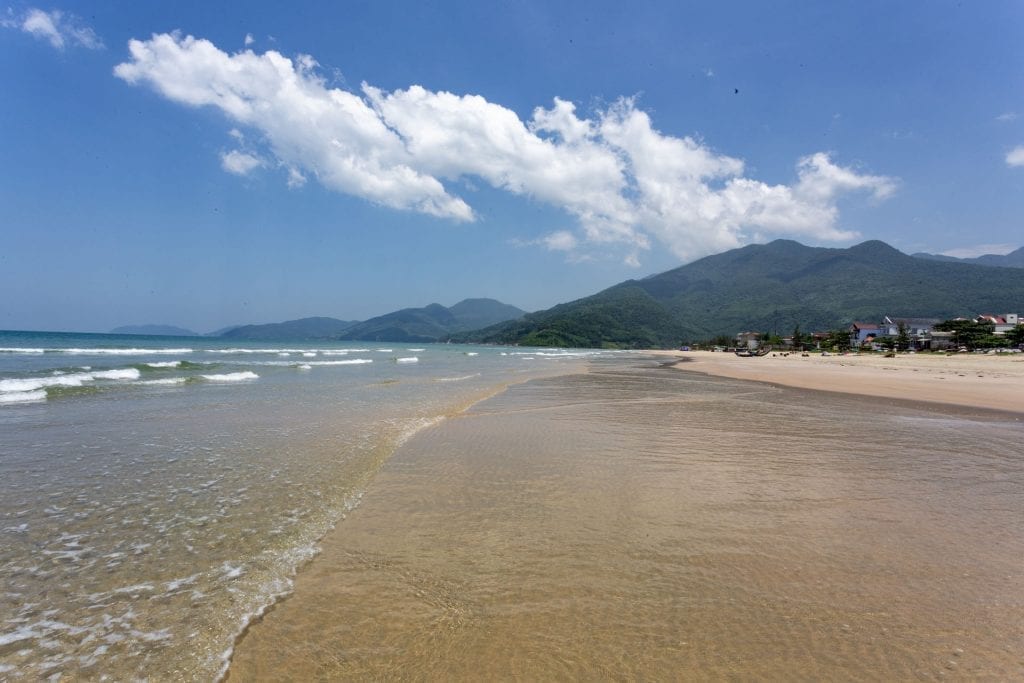 It was a pleasant surprise to see that unspoiled beaches still remain in the area. We stopped for a fresh seafood lunch at Lang Co beach on the Hue side of the Hai Van Pass. A near-deserted stretch of sand with crystal clear waters and a dramatic mountainous backdrop. With the recent decline of anything resembling a beach in Cambodia and the deckchair-filled beaches of Thailand, it was a relief to see natural beauty still exists nearby. I guess Vietnam has more coastline than even the Chinese can develop so there are still plenty of beautiful bays to be found.

Bring a wide-angle lens and a tripod to best capture the bridge which is the star attraction in the evenings. My most used lens was a 17-40mm throughout the city, and excursions around the tombs, citadel and DMZ. With the close quarters and imposing scale of the architecture I rarely felt that I needed anything with a longer focal length here. The only case for a longer lens was for isolating subjects within the market, but I would have been content with a 40mm or 50mm there too. My trusty 50mm fast prime had plenty of use walking around the street food stalls in the evening simply for the low light performance.

I can’t think of any reason to choose any hotel other than the beautiful Hotel Saigon Morin – unless you’re seeking backpacker-style accommodation. The hotel ticks the box for those accustomed to luxury but comes in at a remarkably reasonable price. Rooms at the Hotel Saigon Morin typically run less than $100 per night and can be booked through our booking engine. Don’t let the mid-range price mislead you, the whole hotel is recently renovated and is as comfortable as any newly built hotel.

While Hue does have a small airport, the more common way is to fly to the larger international airport in Da Nang city and then drive the three hours over the Hai Van Pass to Hue (or the shorter two-hour trip through the tunnel – if you’re a fan of efficiency over spectacular views). You can fly to Da Nang from major cities in the region including direct flights from Ho Chi Minh City, Hanoi, Bangkok, and Siem Reap.

Enter your dates in our flight and hotel comparison engine to search hundreds of sites for the best deals:

Nationals of 24 countries currently get visa free entry to Vietnam (as of May 2019), a welcome change from visa requirements of a few years ago. The list shown on Wikipedia includes the UK, most European countries, and local ASEAN countries. We recommend to check the requirements yourself before your trip as things do change. British citizens can check the gov.uk website for the latest information.