Zeche Zollverein – the Metropolis of the Coal Mines 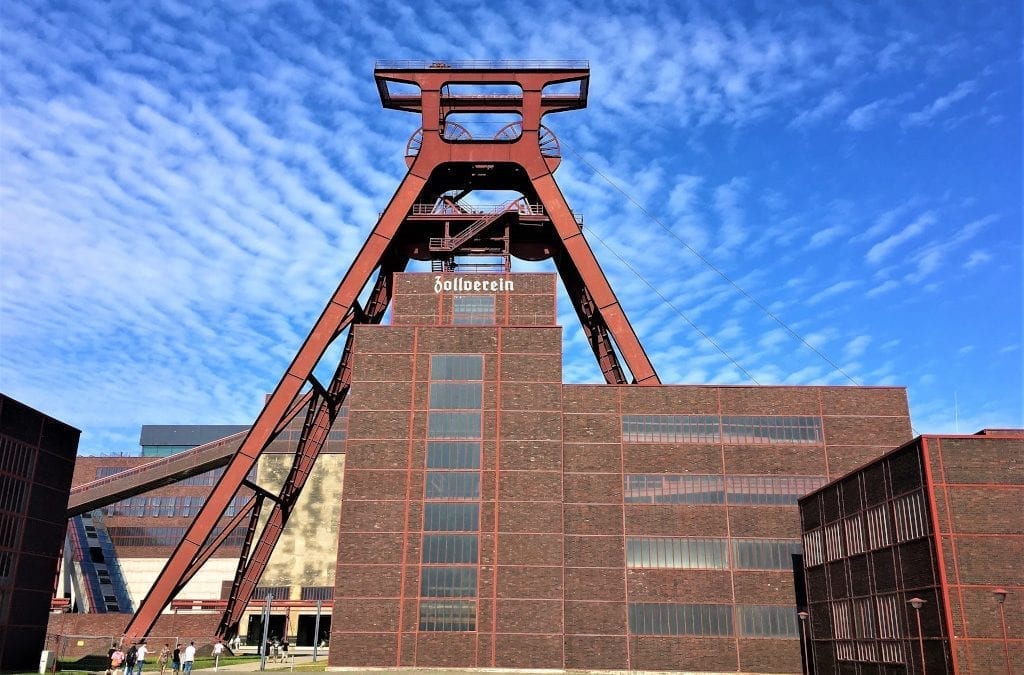 Zeche Zollverein – the Metropolis of the Coal Mines

As I ride up the escalator to the imposing Shaft XII at the Zollverein coal mine (or Zeche Zollverein in German) I am filled with an unmistakable sense of opportunity lost. This is not some misplaced sense of nostalgia for an industry that took the lives of those who worked in it far too early, but the realisation that when Maggie closed down the UK’s coal pits in the 1980s, there really was an alternative.

Named after the customs union of the 1830s, Zeche Zollverein was the largest coal mine in the world. Opened in 1851, it was part of the transformation of the largely agrarian Ruhr Valley (or Ruhrgebiet) in the early 19th century, into an industrial powerhouse that fuelled 51 cities across a narrow strip of land.

Now, a UNESCO heritage site, it has been converted into a museum paying testament to, without glorifying, the Ruhr’s industrial past.

People ride their bicycles along disused railway tracks, or walk around artificial hills made from the pit detritus in the 100-hectare Zollverein park. This a far cry from 1932 when Shaft XII was opened, and declared the most beautiful coal mine in the world. It was designed both with efficiency and architectural aesthetics in mind. Then the surrounding countryside was engulfed in smoke.

Shaft XII – a Pastiche of Bauhaus

I had come here on the search of Bauhaus off-the-beaten-track, to mark the 100th year of the movement that has shaped so much of our architecture, only to discover that Zollverein is not Bauhaus.

“It might look like Bauhaus,” my guide Marc Olejniczak explains, “but it is not.” Marc refers to the imposing entrance to the site, dwarfed by the magnificent pit head.

“The workers didn’t enter this way, they had another entrance,” he adds. Hardly, the new beginning that was to challenge the existing social order imagined by Bauhaus movement founder Walter Gropius. “The owners wanted to say this can be done by machine, rather than man.”

“Like Metropolis,” I venture, referring the Fritz Lang futuristic masterpiece that is often seen as the fore-runner to modern science-fiction movies.

“Precisely,” Marc responds with a smile, as if I had stolen his words. Work on Shaft XII commenced in 1928, while Metropolis was released a year earlier. Zollverein itself started operations in 1851.

Instead, Zollverein conforms rather to the principles of New Objectivity rather than Bauhaus. Indeed, certain aspects of the site have an artificial symmetry imposed upon them, such as the twin gates at the entrance, while Bauhaus frowned upon such concepts wishing to explore new architectural forms.

In 1986 the last mine at Zeche Zollverein was closed down. Originally, the idea was to mothball the whole place, but then the idea formed to turn it into a creative space and museum. Part homage to Germany’s industrial heritage and part creative foundry, similar to the Spinnerei in Dresden.

It took a year just to remove the coal from the building, but the result is a resounding success.

On the same level as the reception area at Shaft 12, sits the Ruhr Museum. Walking down the stairs towards the exhibition rooms is like descending into a coal mine, although one fortunately air-conditioned. This is intentional.

The top level is devoted to a permanent exhibition on modern day Ruhrgebiet. The region has always been a melting pot with immigrants constantly joining the urban conurbation. The display includes an interesting group of photographs by Brigitte Kramer of the diverse multiculturalism in the Ruhr, and by Sascha Kraus on cultural stereotypes. I start to get a real sense of community and of working class routes from the mining tradition – of pride. Apparently, the region never voted for Hitler in free elections.

As we descend further down the shaft, the exhibits stretch further back in time as if we are reaching the core of the earth where the coal seams were mined, and the coal first formed 300 million years ago. At first it seems strange to start with the present and descend into the past, but, no doubt like the miners, eventually I acclimatise to the situation.

The exception to this order, is a temporary exhibition on the artist settlement at Margarethenhöhe, a garden city built by architect Georg Metzendorf for Margarethe Krupps from 1909 to 1938 for workers in the region, which is part of the 100 Years of Bauhaus series, and runs to 5 January, 2020.

This fascinating display highlights the work of the artists and craftspeople in the community, trying to forge a new future, much in the style of the Bauhaus movement in Weimar.

A short walk across Zollverein Park from Shaft XII is the Kokkerei Zollverein (Zollverein coking plant) that was closed in 1993 and reopened as an exhibition hall in 1999 – the first exhibition was on the theme of energy.

Marc takes me to the roof of the mixing station next to the Kokkerei. From here we can see across the valley as far as the impressive Schalke football stadium. In the distance, three chimneys are billowing out smoke. They are processing coal imported from Australia at a fraction of the cost it would take to extract it from the ground here. The last coal mine in Germany – the Prosper Haniel – closed in late 2018. I can only imagine what the pollution would have been like when the Ruhrgebiet was in full flow.

The intention is to transform the Kokkerei into a museum explaining how the industrial process for future generations. The mixing station has already been transformed into an amazing creative space where currently an exhibition by ceramic artist Young-Jae Lee and Eun-Mee Lee, entitled Try Again Fail Again Fail Better is on display – perhaps it could be the sub-title for Brexit. One exhibit of pieces of fractured ceramics suspended from the ceiling is particularly striking.

And it is to the ceramic workshop where Young-Jae Lee’s much-sought-after work is being created that I am led at the end of my visit. Here, craftspeople are creating a future out of the past, in a manner that would have pleased Walter Gropius, although at prices that might not.

I am left feeling of what might have been if Thatcher had shared the same vision of the future and sense of community, while realising that in the Zeche Zollverein we really do have a heritage that is for the world to share.

Mark’s trip was hosted and arranged by www.germany.travel.

Other Things to Do in Essen – Folkwang Museum

Established in 1922 and derived from the Old Norse Fólkvangr, a meadow presided over by the goddess Freya where the dead went after combat, the Folkwang Museum is one of the primary collections of 19th and 20th Century art in Germany. The new building was opened in 2010 when Essen was named European Capital of Culture.

Getting to Zeche Zollverein

The Mercure Hotel Plaza Essen is conveniently located next to the Folkwang Museum, and a 15-minute walk from Essen station.

Alternatively, enter your dates in our flight and hotel comparison engine to search hundreds of sites for the best deals:

For more information on Essen

For more information on Zeche Zollverein

For more information on the Ruhr Museum