Like with her previous work, Marina Shacola's latest series, Dressing, sees the photographer again focusing her lens on the people of Turkana, Kenya 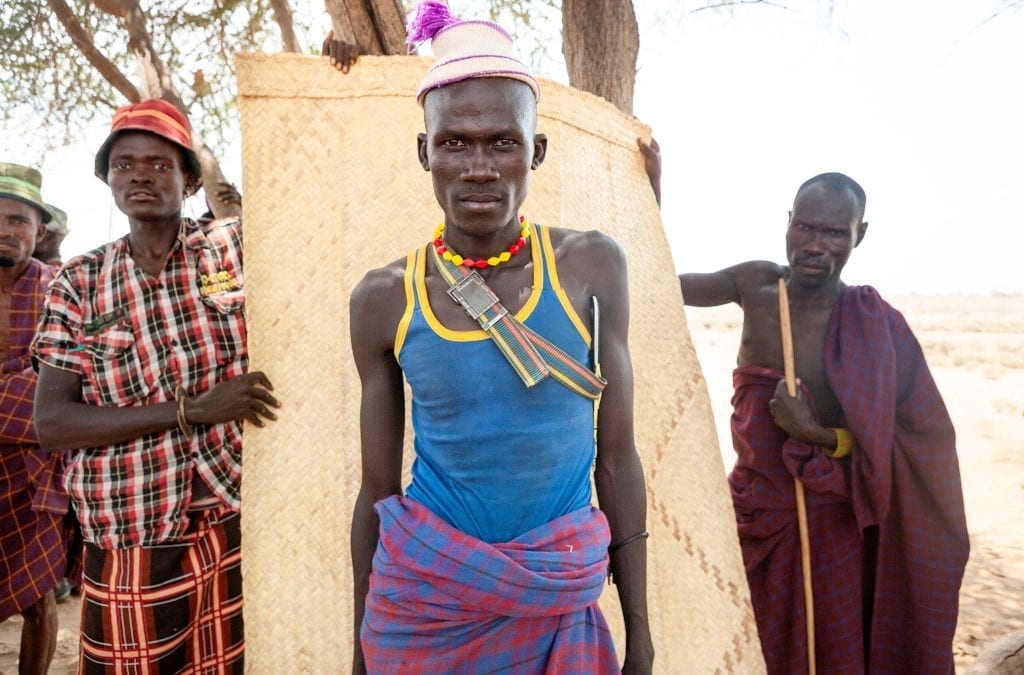 Like with her previous work, Marina Shacola’s latest series, Dressing, sees the photographer again focusing her lens on the people of Turkana Kenya, but this time the work is less about the landscape in which they live and more about the characters that make up this colourful, nomadic people.

The Turkana people are ‘dressed’ with the history of their land and the photographs of Marina Shacola depict the changes which overwhelmingly affect their lives. Every garment tells a story because, in a sense, these worn clothes are history itself.

​Poised in front of makeshift studio sets – devised from mats made by the women out of dry palm leaves found at the banks of dry river beds – the confidence and inherent style of the Turkana tribe comes through.  At first glance the compositions playfully capture the mixing and matching of traditional garments combined with modern dress; a button down shirt is paired with traditional robes, a brand-name t-shirt thrown over a wrap, slippers worn over football socks.  But there is also a powerful subtext here about how the Western World is infiltrating the remote, arid far north of Kenya that has managed to maintain many of their cultural traditions due to decades of isolation.

The main economic activity for the Turkana people for thousands of years has been the rearing of cattle, goats, sheep and camels. No food grows in the region so there hasn’t been a thriving economy to date.  Soon that will all change. In 2012, oil was discovered in the Turkana desert. Experts believe that by 2021 companies will be exporting upwards of 2,000 barrels of oil a day but how the tribe will benefit from this development is extremely doubtful and already a source of conflict.

Over just a few short years, this is already having a profound and arguably detrimental effect to the local community.  Small arms are finding their way through porous borders with unstable neighbouring countries like South Sudan. Longer draughts due to climate change result in killing raids by the neighbouring tribe of Pokot to steal animals. Access to water is more difficult as the new roads to the oil wells have been constructed through the dried up rivers where people dig to get water.

​Shacola’s images ask us to engage with the visual changes that are taking place, and by default ask ourselves some pretty complex moral questions about whether it is right to industrialise every surface of our planet and if it is inevitable shouldn’t at least the rightful owners of the land benefit from it?

The compositions capture the early stages of two worlds colliding, the consequences of which will ultimately result in an identity and culture vanishing.  Children are allowed to go to school only if they wear western clothes and shave their heads for example. Nudity that was once the traditional norm is now shamed, and women are sent bras to cover themselves. This is just the beginning. What else will be wiped out?

Marina Shacola is an award winning photographer who spends her time between Cyprus and Kenya. Shacola also works closely with The Sophia Foundation – a non-profit organisation that helps children in need in Kenya and Cyprus.