Mal Tattersall samples the delights of the Saddleworth Whit Friday Band Contests, to discover much to enjoy in Yorkshire brass band contests. 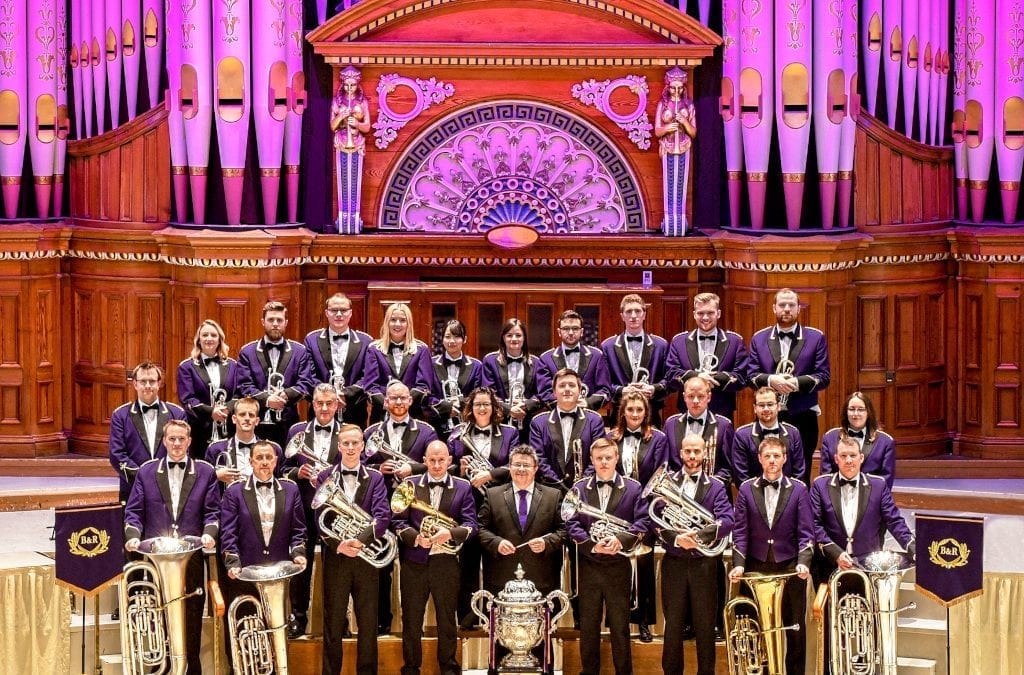 Mal Tattersall samples the delights of the Saddleworth Whit Friday Band Contests, to discover much to enjoy in Yorkshire brass band contests.

There’s an intriguing sign hanging on a red phone box as I wander down the high street in Delph on this damp, dank, drizzling Thursday evening. In huge letters, it says: “Knock Off Point.”

For a moment I stand there staring, wondering what it can mean. Perhaps the spot where stolen goods exchanges hands? A rendezvous for the local ladies of the night, maybe?

The answer turns out to be rather more prosaic. It is the place, a friendly local explains, where both Yorkshire brass bands and those from around the world must stop playing when they march through Delph the following day in what people round here call The Greatest Free Show on Earth.

For tomorrow is Whit Friday, arguably the biggest day of the year for 11 villages which make up the parish of Saddleworth, straddling the bleak but beautiful moors which separate Lancashire from Yorkshire.

And sure enough in the rain outside Delph’s Band Club I stumble across a bunch of musicians practising a few bars of Mephistopheles, which will be their competition piece in a few hours’ time.

Whit Friday band concerts have been a tradition round here since 1884 when five local bands got together in nearby Uppermill after the annual Sunday school walks to see who could play the best.

Their popularity got a massive boost during the 1990s with the classic movie Brassed Off, starring Pete Postlethwaite, Tara Fitzgerald and Ewan McGregor, part of which was filmed in Delph.

And tomorrow, rain or shine – and in this part of the world it usually rains – thousands of spectators will pour into the villages to listen to bands from all over Britain – along with some from abroad – play eight solid hours of rousing music in the open air.

There’s serious money to be made in brass band competitions, with prizes totalling around £35,000 up for grabs, which is why some of the big boys like Brighouse & Rastrick, Grimethorpe Colliery, Black Dyke and Fodens always take part.

For many of the bandsmen, though, it’s not the glory of winning that matters, but the fun of taking part in a brass band completion as they dash from one village to the next, play their music and hope they just have time for a quick pint before haring off to the next contest.

The following day, I’m in neighbouring Denshaw when Rochdale Youth Band kicks off the contest at 4pm. Only about 500 people live in the village, but there must be nearly that many cramming the road outside the splendidly-named Oddfellows Club.

There are a few moans because The Oddies, as the place is nicknamed, has upped the normal £2.30 price of a pint of its excellent Wainwrights bitter to £3. But that’s still cheap to what I’m used to in London, so I order another pint as a couple of women do a roaring trade dishing up some spicy curry for the spectators.

Next to perform is the Penrith Town Band, followed by Krapfoss from Norway. Then, comes a big cheer as Tartan Brass, a scratch band from Scotland put together specially for the contest, march down the road playing a rousing version of “I Could Walk 500 miles …”

Each band can play any music they like as they march, big bass drum thumping, down to the judging area. Then the drummers retire and the remaining members assemble into a neat semi-circle round their conductor to perform a carefully-chosen competition piece.

Hidden away in an upstairs room at Oddies sits the adjudicator Allan Holdsworth, who spent 18 years playing with the Black Dyke Band during the time they were crowned world champions.

Sadly, Black Dyke won’t be playing today but Allan has his back to the window and is not allowed to turn round to see who the band is. Instead he must judge blind, knowing only their number and the name of the march they are playing.

We reckon ours is the best contest in Saddleworth. It is a safe, fun event which appeals to all generations.

Denshaw is one of the newer contests, only starting in 1993 with 25 bands. But Allan will have to listen to 59 brass bands this year – often two or three of them in a row playing the same tune. The Wizard, Knight Templar and Ravenswood seem particularly popular.

Andi Baxter, who organises the Denshaw event, says 59 is about their limit. A few years ago they attracted 66 bands, and reckon the contest could have grown even bigger. But then the police ruled that they must finish in time to reopen the main Huddersfield road by midnight.

“It means we had to bring forward out last ‘booking in time’ to 10.30pm and effectively turn bands away after this deadline,” Andi explains. “So we probably can’t cope with more than 60 bands now.

“But the feedback from spectators is very positive. And the bands constantly tell us that our contest is slick and well-organised. They appreciate the reception they get from our audience.”

It will be a long day for Andi and her team. They start setting things up at 9.30am, then, if they’re lucky, snatch an hour for lunch and after tidying up will finally call it a day around two in the morning.

From Star Wars to Chavs

But it’s worth the effort. She says: “We reckon ours is the best contest in Saddleworth. It is a safe, fun event which appeals to all generations.”

The brass bands are arriving thick and fast, their coaches lining up across the road, when I decide to head back to Delph. By now the main street is heaving, with the packed Swan pub and the Band Club both doing a roaring trade, while a huge hungry queue waits patiently in line outside the chip shop.

The York Railway Institute Band members are smartly turned out in their blue and red uniforms. There’s Putney and Wimbledon Brass, Richmond Town Band, Allerton Brass and next, marching with military precision, the Branton Silver Band.

Then Darth Vader emerges from a coach parked up by the Millgate Arts Centre, waving his lightsabre at the crowd. Behind him is Yoda clutching a pair of cymbals, while a white-clad Stormtrooper struggles to unload his huge bass drum.

It’s the Langley Silver Band, who to great cheers, march down King Street playing the Star Wars theme tune. Despite the fancy dress, Langley, from the Midlands, are one of the country’s top bands and often among the prize winners.

This year, though, they are out of luck. But Chav Brass aren’t. They play up to their name and ham it up like a bunch of layabouts as they wait to play, swigging cans of beer and slouching round in their hoodies, garish shell suits and baseball caps.

But in reality these guys are brilliant musicians. They play in an array of top bands and orchestras, but come together every year specially for the Whit Friday contest. And huge cheers go up as, led by blaring trombones, they finally skip off down King Street belting out a rousing version of Bryan Adam’s Heaven.

They’re set to end the day picking more than £1,300 in prize money, being placed second overall at Uppermill, third in Denshaw, sixth at Diggle and seventh here in Delph – plus a ‘Best Entertainment’ prize at Greenfield.

Some “purists” aren’t keen on scratch bands like Tartan, Bad Ass and March of the Day, who all wear different football shirts, and there are invariably a few “tut-tuts” when they turn up in their bizarre garb. But the younger fans love them, and it all helps add to the carnival atmosphere.

Denshaw’s Andi Baxter says: “There does seem to be more scratch bands these days, possibly due to the influence of YouTube and other social media. And we are aware that some contests regard them with some irritation.

“It’s probably because people are steeped in the tradition of brass banding, having been inaugurated many decades ago – a bit like MCC members not entirely enamoured with 20-20 cricket.

“But while we recognise that many bands take the contest very seriously, particularly as there is good money to be earned, we do encourage the scratch bands because we regard the contest as a fun day out for bands and spectators alike.

“We know from the crowd’s reaction that they love to see the scratch bands and we receive great feedback from the bands themselves. We don’t mind if some of them are not quite up to standard as they all try their best and it all adds to the fun. So we are happy to continue encouraging them.”

What does cheese off Andi is the increasing bureaucracy involved in organising the contest – stuff like risk assessments, data protection and licensing. “We realise these things are important,” she says once the contest is finally over, “but it does add to our workload.

“And although we work very hard all year on fundraising activities to raise the £4,000 needed to stage the event, it is often difficult to get people part to with just £2 to buy our programme on the day or put a few coppers in the collection buckets.

“True, it is advertised as the best free show of the year. But if people don’t put their hands in their pocket there won’t be a contest.”

Except Andi knows in her heart there will be. People like her and scores of other volunteers working behind the scenes across the Saddleworth region, will make sure of that.

I’ve already booked my hotel to be there next year on 5 June. I suggest you do the same – if you can find any rooms still going spare for most places are booked up a year in advance.

Best take an umbrella, of course, because it normally rains. But whatever the weather, you’ll have a reet grand time listening to some wonderful brass band music.

Things To Do in Yorkshire

Yorkshire isn’t just noted for its music. For inspiration on what to do in the country, read Mark Bibby Jackson’s Whitby and the North York Moors. Alternatively, how about sampling its fresh produce at the Malton Food Festival.