In the lead up to the 100th anniversary of the discovery the tomb of the boy king a new exhibition at the Saatchi Gallery Tutankhamun: Treasures of the Golden Pharaoh presents a rare opportunity to see the priceless artefacts of an ancient Egyptian royal deity. 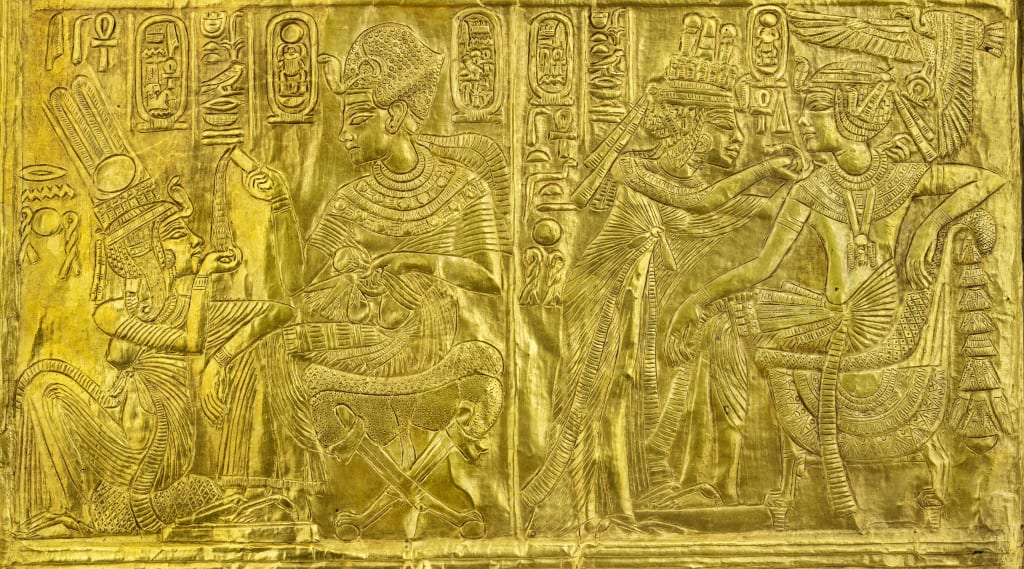 In the lead up to the 100th anniversary of the discovery the tomb of the boy king a new exhibition at the Saatchi Gallery Tutankhamun: Treasures of the Golden Pharaoh presents a rare opportunity to see the priceless artefacts of an ancient Egyptian royal deity.

Nearly 5,000 artefacts were discovered in the Tutankhamun tomb. The exhibition includes 150 treasures, the largest collection ever to travel out of Egypt and now touring the globe, with 60 making their debut appearance. The exhibition focuses on the funerary objects and how they were used, their meaning and interpretation.

It is the last chance for UK audiences to see the truly fabulous objects placed in the tomb to accompany the pharaoh safely through the afterlife to paradise. The historic objects will return to Cairo to be permanently housed within the full Tutankhamun collection at the Grand Egyptian Museum, currently under construction near the Giza pyramids.

Tutankhamun spent 3,200 years in obscurity after his death at the tragically young age of 19. Born around 1,342 BC he was too closely linked with the reign of his father, Akhenaten, the ‘rebel’ Pharaoh. Successors obliterated all records, inscriptions and monuments relating to the twelfth king of the 18th Dynasty. The boy king died without issue although two mummified stillborn daughters were buried in the tomb with the king.

The young royal lay undisturbed in the Valley of the Kings for some 3,300 years until British explorer, Howard Carter, backed by Lord Carnarvon, famously discovered Tutankhamun’s tomb in November 1922. The glamorous Golden Pharaoh became a worldwide sensation and public fascination has continued ever since. Previous exhibitions of artefacts in 1972 and 2007 drew record numbers of 1.2 million. London is the third of 10 cities to host the new exhibition after Los Angeles and Paris where visitor numbers reached 1.4 million.

The exhibition has a dual storyline: the deceased pharaoh’s fascinating and complex journey to the Netherworld, and the remarkable story of the discovery of the tomb in 1922. When British Egyptologist Howard Carter first laid eyes on the hidden treasure to Tutankhamun’s tomb his first words were “wonderful things”.

As in all epic literary journeys Tutankhamun would face many challenges. The crossing begins with funeral preparations as laid down since ancient times including the Opening of the Mouth ceremony. Each section deals with a stage in the voyage and explores the items and their significance in this final rite of passage. On display are the many items that would be required to assist the journey and provide for a king’s Ba, or soul, in eternity.

Preparations for a pharaoh’s passage through the Netherworld began as soon as he ascended the throne, rather like a maiden collecting a trousseau for her wedding. There are simple bows and arrows, magnificent statuary and jewelled-encrusted amulets to ward off evil spirits. Scarab beetles, a scared symbol of rebirth, adorn many items. Shoes were a mark of privilege in ancient Egypt and the king’s golden sandals are displayed with pride. Apparently, a person said to be ‘under the sandals’ was subservient to another. We have a similar adage in western cultures whereby someone might be seen to be ‘under the thumb’ of another.

Artefacts in the nine galleries of the exhibition have been curated and displayed using digital content, contextual material and audio soundscapes. Black walls and low, strategically placed lighting create a dramatic and sumptuous gallery atmosphere. Each item is breathtakingly beautiful in detail and purpose. Seeing such craftsmanship up close is thrilling. The manufacture of artistic artefacts of this quality tells its own story of a sophisticated civilisation long ago. It puts our own times into sober perspective.

The king’s magnificent nest of carved coffins was created to protect the mummified remains of internal organs separated from the body. Buried alongside are the king’s carved wooden workers or Shabtis. Some of these small mummified figures are inscribed with Spell 6, a magical formula that would bring them to life in paradise. The little figures bring to mind the much larger sculptures of the Terracotta Army buried with the first Emperor of China.

Words are inadequate to describe such opulence and magnificence, not to mention the actual endeavour in creating and assembling such a theatrical funereal production. It speaks of wealth the likes of which most of us would never imagine in our wildest dreams. The exhibition recreates a tiny part of the thrill and awe that Carter must have experienced on first opening the king’s tomb almost a century ago.

“At first I could see nothing, the hot air escaping from the chamber causing the candle flame to flicker, but presently, as my eyes grew accustomed to the light, details of the room within emerged slowly from the mist, strange animals, statues and gold – everywhere the glint of gold.” Howard Carter.

Carter was just 17 when he first arrived in Egypt to work as an artist and was initially considered lacking in the skills to become an archaeologist. However, a meeting with Lord Carnarvon in 1903 led to the famous partnership to excavate in the Valley of the Kings. Work halted during World War I and the project involved tragic deaths, tales of a mummy’s curse and years of expensive and fruitless searching. Carter embarked on one last final excavation season in 1922 in one section of the Valley floor still remaining. His own remarkable story is told in a timeline of events and his unprecedented discovery secured for him his own place in history.

The Legend of Tutankhamun is Born

Tutankhamun’s tomb is the only Ancient Egyptian royal tomb ever found (almost) intact. Although the vast collection of treasures has been removed, the mummified remains of Tutankhamun still lie in the tomb. New technology has resulted in recent discoveries about the life and death of the boy king, as well his family and treasures.

Although Tutankhamun’s reign lasted only nine or ten years, no time at all really to make his mark, the extent and quality of his funerary collection is staggering. As is often the case too, an early demise has added to his glamour and the intrigue and history has endured.

Ancient Egyptian’s believed that death was also a rebirth into ever-lasting life. Regular repetition of a deceased’s name bestowed immortality. It took Howard Carter six full excavation seasons to locate the royal tomb. Had he not persisted against all odds, Tutankhamun might have remained obscured from history forever. It just shows that you can’t keep a good man down. There is something rather satisfying in the tale of a boy king who ultimately defied all attempts to remove him from Egypt’s history. His legacy lives large in both modern archaeology and the public’s imagination.

Produced by the Egyptian Ministry of Antiquities and IMG. Runs until 3 May 2020 at the Saatchi Gallery, London. Tickets tutankhamun-london.com.