Roger Hermiston and Eileen Wise swap the land of Constable for that of Wordsworth and embark on a voyage of gastronomic delights on their Lake District Holiday. 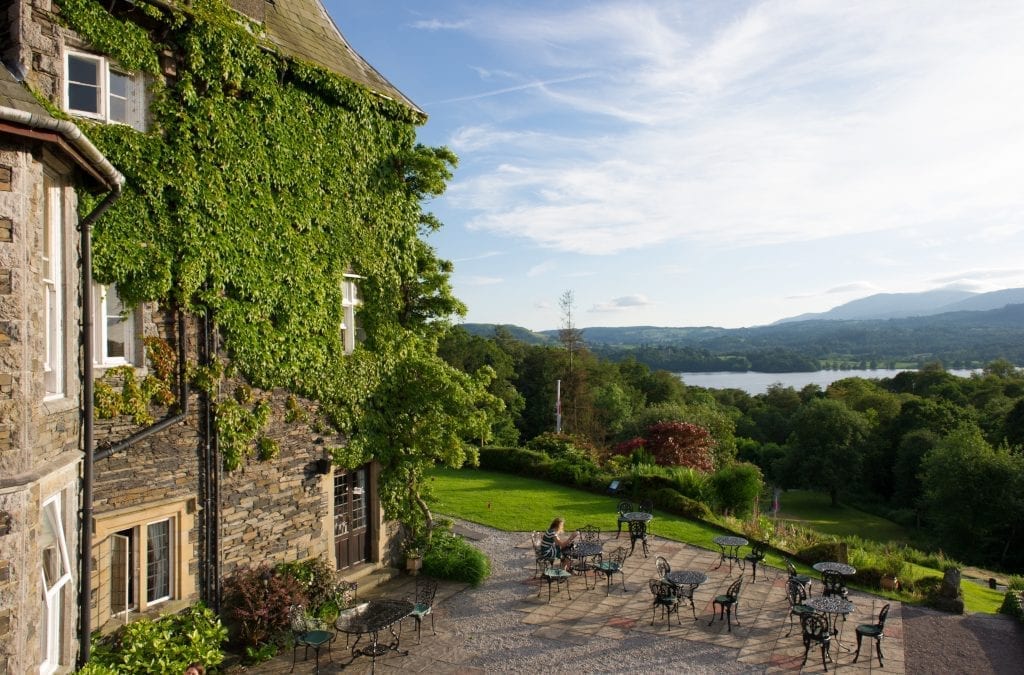 Roger Hermiston and Eileen Wise swap the land of Constable for that of Wordsworth and embark on a voyage of gastronomic delights on their Lake District Holiday.

It was at Lake Ullswater where he wandered lonely as a cloud and spotted his host of golden daffodils, but for William Wordsworth, Windermere, the biggest stretch of water, was the real jewel in the Lake District’s crown.

“None of the other lakes unfold so many fresh beauties to him who sails upon them,” the great poet wrote in his 1810 Guide to the Lakes, a travel guide which, for the first time, detailed the full grandeur of this unique natural landscape for the British people.

Wordsworth recommended the visitor set aside a three-hour voyage around Lake Windermere to absorb the “splendour, the stillness and the solemnity” of the surroundings. But travelling on foot was an equally rewarding experience. “The whole road from Bowness is rich in diversity of pleasing or grand scenery; there is scarcely a field on the road side which, if entered, would not give to the landscape some additional charm.”

Wordsworth’s words echoed in our minds as we journeyed to Windermere for an autumn mini-break. It was interesting to reflect that although we were swapping our flatter, more benign Suffolk Constable countryside, for the rolling, sweeping Wordsworth land, the great artist and the great poet – who were contemporaries – shared a romantic landscape vision and a deeply felt love of nature.

A Literary Trail Through the Lake District

Autumn is the best time of year to visit the Lake District, not just because the crowds have thinned after the summer rush, but because the constantly changing hues and patterns on this majestic landscape are even more spectacular in the new season.

We made tracks to Rydal Mount, Wordsworth’s family home for the latter part of his life, which commands stunning views from the top of Lake Windermere. The poet was a keen landscape gardener, and the splendid four-acre garden remains much as he designed it, with lawns, fell-side terraces, rock pools and rare shrubs.

Of even greater interest is the house, which retains a pleasing lived-in atmosphere, with portraits, personal artefacts, and first editions of the Poet Laureate’s work. Wordsworth added his attic study in later years, and his inkstand, manuscripts and books are still there on display – along, poignantly, with a sword that belonged to his younger brother Captain John Wordsworth who died in a shipwreck off Weymouth Bay in 1805.

But Windermere and its environs aren’t the sole provenance of one literary giant. Polymath John Ruskin (poet, artist, geologist and early eco-warrior) followed in Wordsworth’s footsteps in chronicling and preserving the area’s fragile beauty for the education and enjoyment of future generations.

The Walker siblings in Arthur Ransome’s childhood classic novel Swallows and Amazons set sail for Wild Cat Island across a lake that is an amalgam of Windermere, Derwentwater and Coniston Water.

And somewhere in the nearby fields, Beatrix Potter envisioned Peter Rabbit hopping for his life in a field of cabbages, pursued by an angry Mr McGregor, while the hardworking Mrs Tiggywinkle hung the shirts of Tom Titmouse and the red tailcoat of Squirrel Nutkin out on the washing line.

For fans young – and old – the sights, sounds and smells of the Peter Rabbit books are expertly recreated in the interactive World of Beatrix Potter Attraction in Bowness on Windermere. Also adorning the garden terrace is a superb 15ft bronze sculpture, which was unveiled in 2006 by the actress Renee Zellweger when she was filming the biopic about Potter.

It depicts three children releasing Potter’s character Jemima Puddle-Duck, and the statue also features characters from all 23 of Potter’s tales, the mysterious code she used in her personal diary, and a bas relief of one of her Lakeland homes.

Our literary trail exhausted, we retired to the first of our two hotels for some rest and recuperation – and what a unique experience it proved to be. The Gilpin Hotel and Lake House is just a couple of miles from Lake Windermere, set off the road with wonderful views (in particular) of the rolling, pastoral landscape of the Lyth Valley.

As the name suggests, it’s essentially two hotels, a mile apart on either side of a quiet country road heading towards Bowness. The family-run Gilpin is a whitewashed Edwardian country house, set in 21 acres, which has been stylishly extended over its thirty years as a luxury hotel. It now boasts 25 bedrooms, including luxurious Garden Suites (with their own outdoor cedarwood hot tub) and even more luxurious Spa Lodges (each with convertible treatment area, steam room, rain shower, stone bath and hydrotherapy hot tub).

The Gilpin also hosts two restaurants – the Michelin-starred HRISHI and the more informal Asian Gilpin Spice. More on them in a moment, after we’ve taken the five-minute chauffeur-driven drive to The Gilpin’s other establishment, the Lake House, a former fishing lodge set in 100 acres of grounds with its own beautiful private lake.

This is also a fully-staffed boutique hotel, with six sumptuous rooms, a heated indoor swimming pool, outdoor hot tubs and saunas, and a Swedish-style spa treatment cabin set on the edge of the woods overlooking the lake. On arrival it was the latter we headed to first, for an hour’s deeply soothing and satisfying massage.

Then it was back up to the main house for the first of our culinary treats. To outsiders Cumbria’s connection with the Spice Trade might not seem an obvious one, but in the 17th century the thriving port of Whitehaven began to import large quantities of cinnamon, cassia, cardamom, ginger, pepper and turmeric from Africa and Asia. Local cooks responded imaginatively to these new, unfamiliar ingredients and dishes such as Grasmere Gingerbread and Westmorland Pepper Bread were born.

The Gilpin Spice takes its cue from Cumbria’s long association with the East, and in its colourful, lively restaurant you can watch the chefs preparing your meal in their adjacent open-plan kitchen. We wanted the full experience so opted for the Vegetarian Sharing Menu, which proved a great experience. Among the many highlights was the Delhi ‘Kachori’ – stuffed pastry with garlic chutney, sweet yoghurt and tamarind – and Rohan’s Auntie’s Special Peas and Lentils – pea curry stuffed in a King Edward potato, with tempered lentil and spinach broth.

After a snooze back in ‘Gertie’ and then many lengths of the pool to work off one meal and build the appetite for the next, we returned to The Gilpin in the evening for the piece de resistance – our tasting menu at the HRISHI restaurant.

Hyperbole might now start to set in – but really, this was a unrivalled gastronomic experience. The restaurant takes its name from Executive Head Chef Hrishikesh Desai, whose impressive credentials include a Roux Scholarship, the Craft Guild of Chef’s National Chef of the Year award, and winner of BBC2’s Chefs on Trial. Remarkably he won his Michelin Star in 2016 just eighteen months into his tenure at The Gilpin.

Hrishikesh, who hails from Pune, Western India, aims to deliver modern British dishes with an infusion of his homeland – in keeping with the Cumbrian tradition. You have to say he succeeds triumphantly. We went for a mixture of the Great British and the Plant Based tasting menus – a succession of mouthwatering dishes such as baby aubergine (with aubergine masala caviar, saffron peached apricots, rolled medjool dates and cardamom gel), and the intriguing ‘Kendal Calling & My Band is Ready’ (Cartmel Valley venison loin, glazed venison kofta, truffle cream potatoes, Cumbrian sloe gin and blackberry sauce).

The superb food notwithstanding, just as much a highlight of the evening were the accompanying wines and the fascinating commentary on them by our expert sommelier – a tour de force of a history lesson which ranged across the continent of Europe over the many centuries.

Indeed, the dedication – many have been here more than a decade – and enthusiasm of the staff is self-evident and is clearly one of the keys to the success of The Gilpin. But they take their cue from Barney and Zoe Cunliffe, who have created such a friendly, relaxed atmosphere in the house that was originally built in the year Queen Victoria died, and which has now been in their family for exactly a hundred years.

Lord Lonsdale was better known as the ‘yellow earl’ (his favourite colour). As the title might suggest this very rich man was a flamboyant character and his social circle stretched far and wide – and included both King George V and Kaiser Wilhelm. He was the first President of the Automobile Association, but is perhaps best known for bequeathing the famous Lonsdale Belt to boxing.

As you walk around the splendid oak-paneled rooms of the Holbeck you can imagine the buzz and excitement of the wild house parties of the Lonsdale era. But for the last thirty years it has been a boutique hotel, garlanded with awards for the quality of its food and accommodation.

We stayed in the Miss Potter Suite, one of the separate cottages and outbuildings – there are 32 rooms – just yards from the main hotel, from where we had the most stunning views out over Lake Windermere and the Langdale Fells. On the wall of our separate sitting room there were some fascinating articles and a giant poster of the film Miss Potter.

We hugely enjoyed our stylish, spacious bedroom with superb king-sized bed, and contemporary bathroom. The weather wasn’t really conducive to a soak in the hot tub on our terrace outside, but on a clear day, with the extraordinary vista of the fields, the fells and the lake, it would be a delightful experience.

Instead we opted for a reinvigorating massage at the spa, before heading to the grand dining room (three AA rosettes) for a splendid four-course Gourmet Menu, the highlights of which were the fillet of salt aged Hereford beef and the venison tartare.

Given the magnificent countryside around, it’s best to head off for a lengthy walk with only the Herdwick sheep for company. The Troutbeck circular has no steep climbs and is a perfect half day’s exercise, before returning to the Holbeck having earned a cream tea besides a cosy log fire.

Rooms from £275 per night based on two adults sharing a Classic Room on a B&B basis.

Rooms from £445 per night based on two adults sharing a room on a B&B basis.

Exploring the Best Beaches in The Bahamas