Roger Hermiston and Eileen Wise visit the remote and relaxing Scottish island of Eilean Shona stopping at a great couple of places on the way there and back. 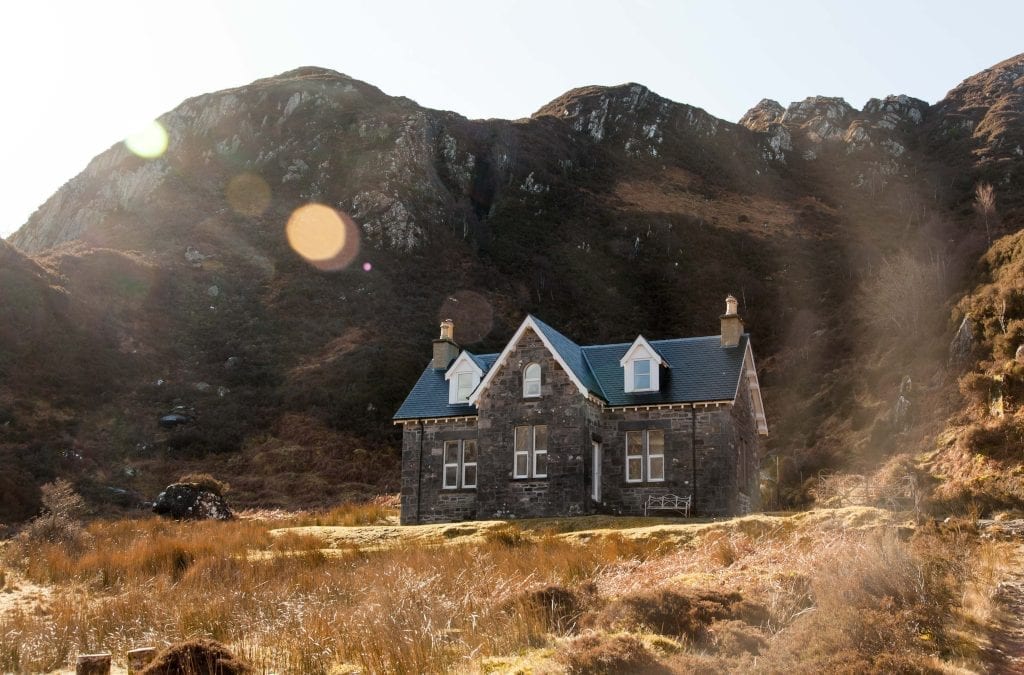 After their trip to the Lake District, Roger Hermiston and Eileen Wise visit the remote and relaxing Scottish island of Eilean Shona stopping at a great couple of places on the way there and back.

The babbling of a hillside stream, the gentle rustling of the wind in the Corsican pine trees, the exuberant piping tune of the oystercatcher, and – drowning all of these out from time to time – the bellowing of the rutting stag.

Welcome to the sounds of the remote Scottish island of Eilean Shona, where the senses are quickly attuned to a more natural world. A peaceful, magical world too, where you leave behind the constant hum of civilization, discard its trappings – the car, the mobile phone and the television – and revel in life’s simpler pleasures like walking, reading and playing Scrabble in front of a coal-fired stove in a cosy cottage.

Eilean Shona (it means ‘sea island’) sits just south of the more familiar ‘Small Isles’ of the Inner Hebrides – Canna, Rum, Eigg and Muck. It’s a small tidal island nestling in the entrance of the beautiful and tranquil Loch Moidart, accessible to the mainland – the peninsula of Shona Beag – by a short causeway at low tide.

Out of necessity we were transported there at high tide on a small boat, laden down with a week’s provisions of food and drink. The island has no shops, no pubs – just a village store which is open for two hours every Wednesday for residents and visitors to stock up on essentials.

Eilean Shona is owned and run by Vanessa Branson, entrepreneur and designer, sister of the Virgin boss. She bought the 2,000-acre private island along with her then husband Robert Devereux in 1995 for around £1.3 million. Gradually, sensitively, she has opened it up to the outside world, letting out the main house and eight former crofters’ cottages, hosting artist retreats, and even welcoming the occasional film crew in search of a superbly atmospheric site.

We had elected to spend our week away from the real world in Red Cottage, a 15-minute walk from the landing pontoon and high up in the woods with stunning views out over Loch Moidart. There are no roads on the island, so Scott – one of four permanent employees, all enormously helpful during our stay – brought the luggage up to our new temporary home by quad bike.

Flora and Fauna of Eilean Shona

In our Little Red Riding Hood-like cottage, we were surrounded by the most magnificent woods. Eilean Shona boasts one of the most diverse Pinetum’s in Europe, thanks to the exploits of former owner Captain Swinburne, a classic Victorian explorer who scoured the world for specimens on his travels in the 1850s. Pines, cedars, firs, limes and cypresses of all varieties abound in the central southern part of the island.

Outside, on a strategically placed tree stump just below our sitting room window, we placed nuts and seeds and waited eagerly for the arrival of the pine marten who inhabit these parts. The visitors book encouraged us to believe we could catch a glimpse of these solitary, elusive creatures.

Sadly, this formidable hunter – who is easily capable of catching the red squirrels who also live hereabouts – failed to show for us in daylight hours, although he clearly ate the food in the dead of night.

Observing the variety of wildlife is one of the joys of visiting Eilean Shona. Otters frequent the shores of the island, and common and grey seals can often be seen lying on rocks exposed at low tide in the South Channel. As for birds, well, white-tailed eagles can be spotted flying over the island – we were sure we found some feathers –, grey herons breed on a small wooded island nearby, and curlews, oystercatchers and shags proliferate.

We soon established a regular pattern for our days. After a leisurely breakfast we would set off on a four-hour walk, returning to Red Cottage to hunker down for the late afternoon and evening with a good book in front of our lovely, warm coal fired stove. A glass or two of wine to accompany our evening meal, and then we would try to revive forgotten skills on the Scrabble board.

There is such variety in the walks on Eilean Shona. One day we strolled along the path by the shore past delightful tiny inlets and coves until we reached the Old Schoolhouse – supposedly originally sited far away on the eastern site of the island so the owner couldn’t be disturbed by the noise of excitable children.

Another time we battled our way uphill through the woods, then across boggy fields of fern, bracken and heather before reaching the island’s summit, Beinn a’Bhaillidh, at a height of 863 feet. Our reward was the most astonishing view out over the Western Isles, with Muck, Eigg and Rum in the foreground.

Another walk took us through the heart of Captain Swinburne’s Pinetum and westward towards Sloe Bay, which has a lovely sandy beach. The latter stages of this trek are not for the faint-hearted, with a couple of steep rocky descents, for one of which a rope is provided.

The more adventurous can swim off the island’s pier in the beautifully clear – if initially cold – waters, or go kayaking around the bay. In the village hall, which does get WiFi on occasion – if you’re lucky, there is a table tennis table and a darts board, surrounded by sofas and armchairs.

We enjoyed a guided tour of Eileen Shona House, which sleeps up to 20 and would be a perfect holiday venue for an extended family reunion, or a major birthday, Christmas and New Year celebration. The house retains the feel – and many of the features – of a classic Edwardian Scottish hunting lodge, but Vanessa Branson’s exuberant, bohemian taste in design and art are very much in evidence. The bedrooms in particular are a vibrant collection of colours and styles, much of it contemporary African, Mediterranean or Middle-East.

Vanessa founded the Marrakesh Biennale in 2005, and turned a ruined riad in the Moroccan city into a boutique hotel. The dining room is perhaps the most striking of them all. Silver chandeliers overhang the long, dark wooden table, seating fourteen, which runs through the centre, while by contrast the walls all around are covered, from floor to ceiling, in a fabulous mural of bold, bright colours.

The artist was the abstract Glaswegian painter, Fred Pollock, whose instinctively powerful work has something in common with his famous American namesake Jackson.

In 1920 the writer JM Barrie rented Eilean Shona for a holiday, and found the perfect environment in which to write the screenplay for the 1924 film version of Peter Pan. Accompanying him was his foster son 20-year-old Michael Llewelyn Davies who – along with his four brothers – was the inspiration for the characters of the Darling brothers and the Lost Boys in the story.

Michael, who would drown mysteriously the following year, was similarly stirred and penned his own lines of poetry. ‘Island of sleep where wreathed time delays, Heaven of things remote, indulgent, free…’

Suffolk to Eilean Shona is a mighty long way, so we bookended our time on the island with overnight stays at Fort William on the way up, and Crinan on the way back. At the former, we checked into The Grange, a bed and breakfast hotel in a beautifully-maintained Victorian townhouse, set high up in its own grounds above Loch Linnhe with splendid views of the Ardgour hills.

We had the Garden Suite, a little cottage on its own delightfully furnished that featured a huge, comfortable bed and copper tub bath.

The hearty breakfast, in the elegant dining-room, is perfect for the hikers and cyclists who flock to these parts. But what makes The Grange even more of a pleasant place to stay is the engaging, experienced host, Joan Campbell, who goes out of her way to offer advice and tips for your visit to the Highlands.

The final destination on our Scottish sojourn was Hotel Crinan, overlooking the tranquil loch of the same name and gazing across to the islands of Jura, Mull and Scarba, with the Atlantic Ocean beyond. The Crinan has been a hotel in some shape or form for around 200 years.

The current owners, the Ryan family, have run it for nearly a quarter of that time, and these days it is under the direction of Frances Macdonald Ryan – who, under her maiden name, is one of Scotland’s leading artists.

One of the delights in wandering around this traditional, relaxed hotel – with its own little pub attached – is viewing Frances’ work which decorates many of the walls. The bulk are dramatic, panoramic landscapes of Argyll and the Western Isles, although in the sitting room there is a series of thrilling horse racing paintings.

There is a splendid little shop next to reception full of African artefacts, born of Julia’s connection with the charity Feedback Madagascar: we came away with a colourful, intricately hand-woven basket.

Frances’ son Ross runs a boat service that ferries artists out to Iona and Barra – his mother coming on occasions to take tutorials –, and also takes Orwell fans to Jura where the great writer wrote his final masterpiece, 1984, while battling tuberculosis at the end of the 1940s.

Dining at The Crinan

We chose to eat in The Crinan’s lively Seafood Bar, where local and international guests mingled. Fish and chips rarely tasted better. But there are other options – fine dining in the Michelin-rated Westward Restaurant, or mixing with the locals in the hotel’s small public bar, known as The General (or also, somewhat mysteriously, as The Panther Arms).

The latter is well worth a visit, not just for the cosy atmosphere and the quality of the local whisky, and also for the fascinating collection of historic photographs on the wall. And on the mantelpiece, presiding over it all, is the magnificent head of a highland cow, replete with antlers, which – thankfully – had died a natural death rather than being slaughtered for the purpose.

Before leaving we took a walk with a friend who lives locally along the scenic Crinan Canal, which stretches to Loch Fyne nine miles away.

We left Scotland, as ever awed by the grandeur of the landscape and impressed by the welcome we received everywhere we travelled.

The Garden Suite £195 for two people per night including breakfast.

Cultural Things to Do in Lausanne Switzerland